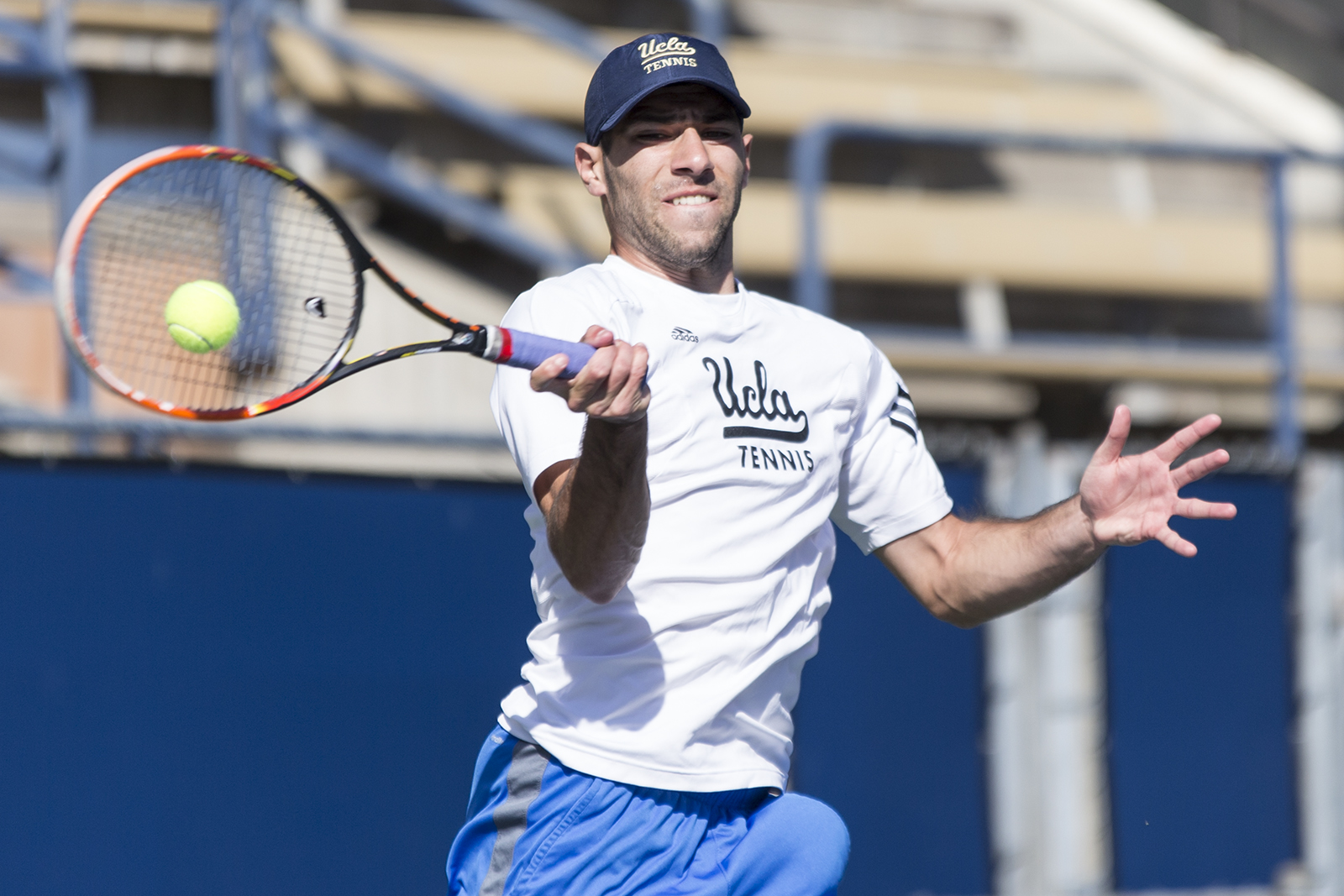 A 90-minute delay in the match didn’t cause a misstep for the UCLA men’s tennis team in Ojai on Thursday.

Thursday’s match was delayed for almost an hour and half due to the Oregon-Cal dual match running late in singles. Assistant coach Grant Chen said he was proud of the Bruins’ ability to stay composed and fresh for the late match.

“I think the guys handled the situation and conditions well, and they played a very good match,” Chen said. “I thought the guys set the tone well with doubles. No. 2 and No. 3 doubles got off to a great start.”

The No. 2 doubles team of junior co-captain Karue Sell and sophomore Joseph Di Giulio set the tone very early in the dual match routing its opponent 8-1.

“We lost the second game, but then after that we got into a groove with our returns,” Sell said. “We were also serving well.”

UCLA finished doubles out on court three, where senior co-captain Dennis Mkrtchian and freshman Austin Rapp won 8-5. It was one the Bruins’ cleanest doubles performances of the year, only giving up a total of 12 games out of 35.

“I think the guys continued that momentum into singles. We put a lot of scoreboard pressure on Washington early by taking four out the first six sets,” Chen said. “I think that gave us confidence and we closed out well.”

“I thought it was important for me to bounce back after a tough loss to USC,” Mkrtchian said. “So it was good for me to get a good match under my belt before we play (USC) again.”

The Bruins and the Trojans are in an unfamiliar place this year.

Meeting in the Pac-12 tournament is nothing new. However, meeting each other in the semifinal is.

Since the birth of the tournament back in 2012, UCLA and USC have met in the final every year.

With their victory over the Huskies now complete, the Bruins said they’re eager for one more shot at their crosstown rivals. Mkrtchian expressed that after his loss last Thursday against his USC opponent that he was looking forward to one more shot against him.

Friday’s semifinal match will be the third matchup between UCLA and USC this year. In their first meeting at Marks Stadium, the Bruins lost 4-1, but the score didn’t relay how close the match was.

Coach Billy Martin said he felt that the double point was the difference between losing and winning that match. In the two teams’ second meeting in Westwood last week, it was no longer the doubles point that troubled the Bruins – it was singles, losing key matchups at No. 2 and No. 3 singles. The Bruins fell to the Trojans 4-2 that day.

Artistic, energetic, creative, and hard-working team needed to help create amazing large-scale sculptures and balloon bouquets. This is a FUN and FAST-PACED job, unlike anything else. [email protected]lebrations. $20-30 per hour. 3 miles west of UCLA in Santa Monica. 310-458-4422 Resume to [email protected]