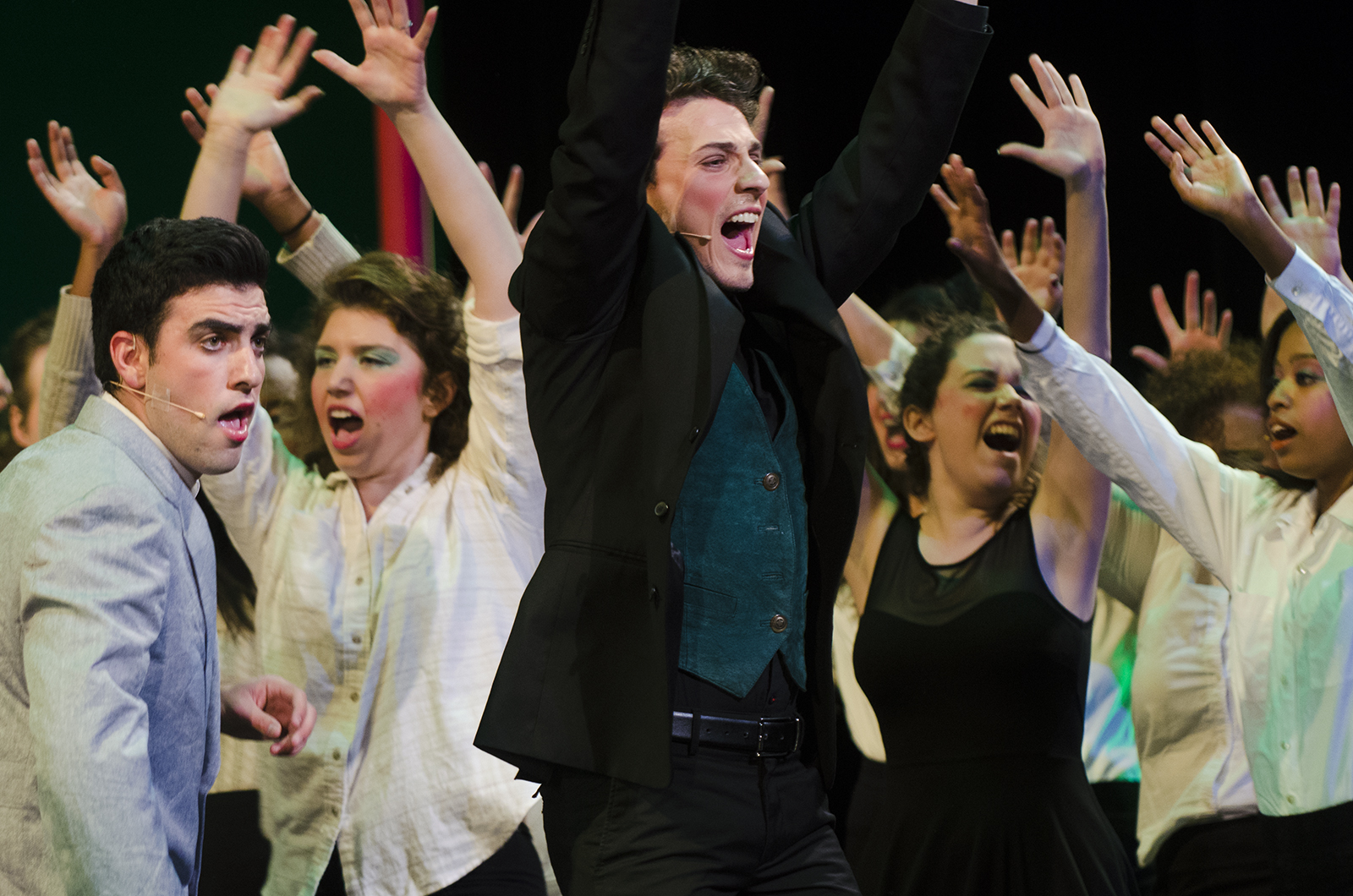 Hooligan Theatre Company will put on “The Wedding Singer,” a new-age rock musical set in the 1980s based off of the 1998 movie of the same name starring Adam Sandler and Drew Barrymore, Friday through Sunday at the Freud Playhouse. (Daniel Alcazar/Daily Bruin)

This weekend, crimped side-swept hair and pastel leggings will no longer be relics of a forgotten past.

One of two spring productions, “The Wedding Singer” is a part of Hooligan Theatre Company’s 10th anniversary theme of “looking back and forward.” While last weekend’s production, “Thoroughly Modern Millie,” presented a look back to one of Hooligan’s first productions in 2006, “The Wedding Singer,” a new-age rock musical, will portray their look forward to the student-run theater company’s own future.

Catherine Yount, a fourth-year human biology and society student and director of “The Wedding Singer,” said Hooligan’s production challenges the perception that the musical is solely a piece of entertainment by exploring issues relevant to the current day and age, such as the struggle between love and money.

Based off the 1998 movie starring Adam Sandler and Drew Barrymore, Hooligan’s musical rendition of “The Wedding Singer” is about wedding singer Robbie Hart’s journey to redefine his concept of love after being left at the altar. In addition, the show features characters such as Julia Sullivan, a waitress who is in a relationship with a man consumed by his Wall Street job. Together, the characters journey alongside Hart to find love in the hustle and bustle of the ’80s.

“I think in a lot of ways the show is especially relevant to our age demographic,” Yount said. “It is (about) people deciding what their ultimate truth is going to be.”

Joshua Shtein, a first-year undeclared social sciences student who plays the character Robbie Hart, said Hart is a particularly relatable character, especially because of the various highs and lows that he experiences throughout his life.

Yount said that as a rock musical, “The Wedding Singer” will have a live orchestra and feature an array of songs, from love ballads to rock ‘n’ roll. While the music is a homage to the ’80s, Yount said most of the songs are original pieces unheard in the film version.

“Those original songs capture the feeling and essence of what it was like to be those people in the ’80s,” Yount said.

In addition to featuring time-appropriate music, Yount said “The Wedding Singer” also aims to highlight stereotypical ’80s style, including big, bold makeup and hair. Yount said that the costume color of each lead will be unique to that character, but will change throughout the show to match the costumes of other characters as they become more closely affiliated.

Michelle Joo, a second-year theater student with a concentration in scenic design, said that like the costumes, hair and make-up, the musical’s set design makes a bold statement through the use of bright, highlighter-toned colors.

Another second-year theater student with a concentration in scenic design, Margaret Starbuck, said that she and Joo did not want the show’s sets to be very realistic. Instead, the two decided to create more conceptual sets, with locations indicated through PVC frames serving as silhouettes of a wall.

“The whole thing is sort of geometry-inspired,” Starbuck said. “We wanted to have PVC pipes create these really strong, rectangular shapes and lines.”

Unlike the typical duties required of scene designers in the UCLA theater department, Joo and Starbuck, along with the rest of the cast and crew, built their own set for “The Wedding Singer.” This required buying materials from Home Depot, working over spring break in an alumna’s home to saw, drill and nail the set, and renting a U-Haul to drive the completed set to UCLA.

After the designers assembled the set in Freud Playhouse, Yount said it was interesting to see the company transition from three months of rehearsing in parking lots and classrooms to rehearsing in a fully functional theater during the week of the production.

Yount said it’s worthwhile to see what a group of mostly non-theater majors can put together in a musical relevant to their audience.

“It’s a couple of hours that I think can really speak to people who want to think of big-life things but through cheesy ’80s songs,” Yount said. “It’s a fun way to think about things that are on our minds.”