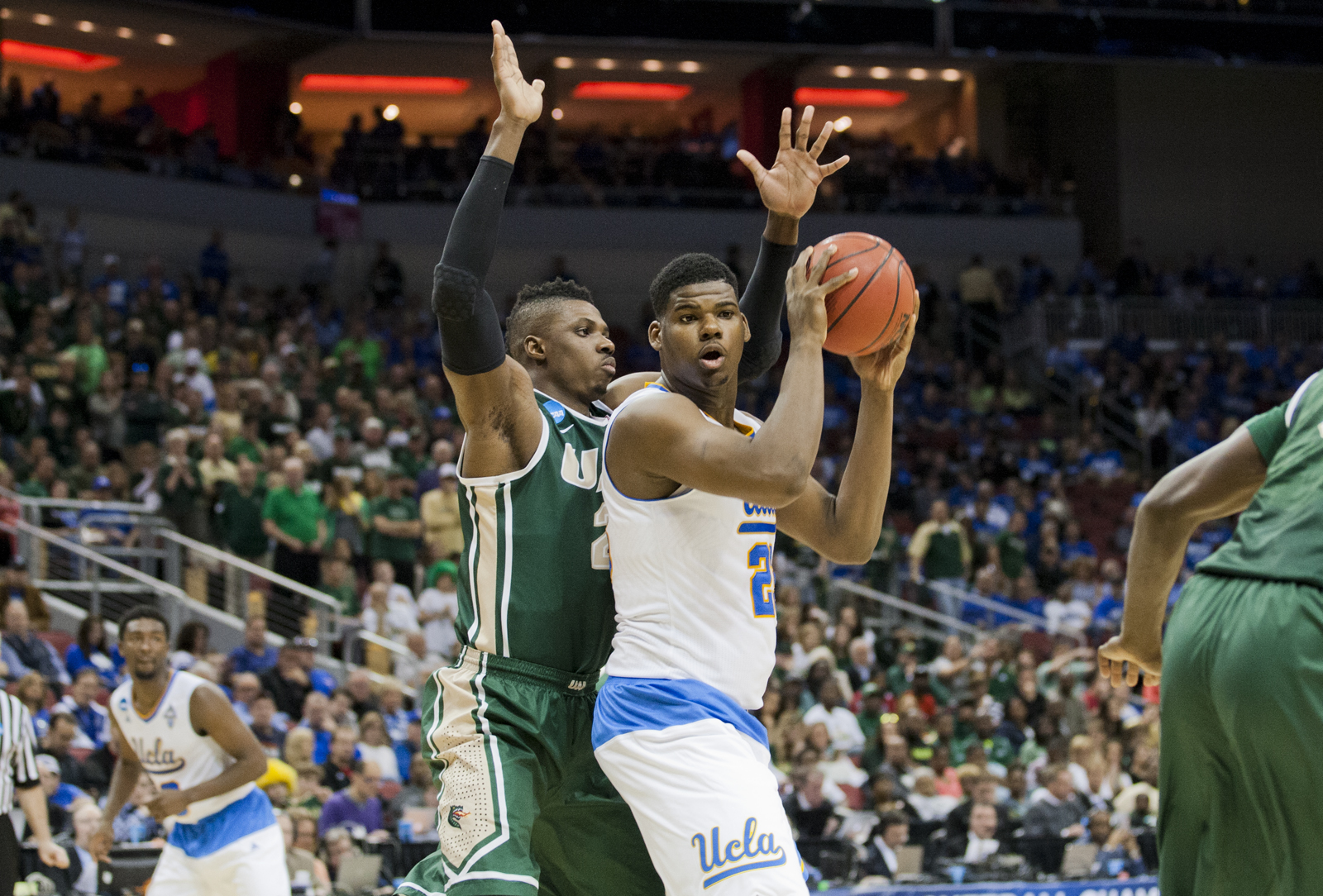 LOUISVILLE, Ky. — UCLA’s inclusion in the NCAA tournament was deemed a joke by those outside the Bruin locker room, an egregious mistake on behalf of the selection committee.

But thanks to UCLA’s resident funnyman, it’s the Bruins who are laughing now.

Tony Parker tallied a career-high 28 points and UCLA became the first – and perhaps unlikeliest – team to clinch a spot in the Sweet 16 by defeating the University of Alabama-Birmingham 92-75 Saturday.

The Bruins (22-13) got their junior forward/center going early, as Parker scored five of UCLA’s first seven points – and eight consecutive at one point. UCLA dominated UAB (20-16) inside throughout.

“I had to establish myself early,” said Parker. “I didn’t do that versus (Southern Methodist University), and I felt like it was big time for me to do that today.”

That outing earned Parker teases and taunts from teammates.

“I was, like, ‘Man, don’t play like a bum like you did (against SMU),'” said sophomore guard Isaac Hamilton with a laugh. “You got to be straight up. And he takes it. He knows it’s out of love.”

There was a lot to love about Parker and UCLA’s performance.

Motivated by his teammates’ chatter, the one-time prized recruit seemed to be venting three years worth of frustration on UAB in perhaps his best collegiate performance, while the Bruins looked every bit worthy of their controversial tournament berth, leading the Blazers by double-digits for much of the contest.

Parker and freshman forward Kevon Looney led a relentless UCLA attack inside, as both recorded double-doubles. The Bruins stretched a 28-10 scoring advantage in the paint at halftime to 52-22 by game’s end.

“Getting (Parker) going early is something that is key for us and he was big time,” said sophomore guard Bryce Alford, who finished with 22 points and five assists. “That dude was a monster today.”

King of the deadpan remark, Parker was downright lively on the KFC Yum! Center floor Saturday. When he dunked – which was often – he pounded his chest. He screamed. He joked with teammates.

Somehow, it didn’t seem to catch the Blazers’ attention, as UAB opted to defend the junior forward/center with just one player for much of the contest, to little or no effect.

Perhaps thanks in part to Alford’s shooting display on Thursday and two early first-half 3-pointers from senior guard Norman Powell, the Blazers rarely challenged Parker or Looney inside with multiple defenders, wary of UCLA’s potent threats on the perimeter.

UCLA guards regularly drove the lane with little resistance, leading to easy layups or even easier dunks for Parker and Looney. When the Bruins fed Parker the ball down low, he routinely beat whichever Blazer defender happened to be on him.

“They really weren’t paying attention to us at all really. Me and Kevon came out the half with six or seven rebounds apiece and we were up by 18 (in rebounding),” Parker said. “They really weren’t trying to box us out or anything. I really don’t understand their game plan.”

Not many understood UCLA’s inclusion in the tournament. And while a blowout win over a No.14 seed might not win any converters, Parker and the Bruins did their part and are now into the Sweet 16 for the second straight year.

Now, UCLA of all teams is off to Houston as one of 16 teams still contending for a national championship, where it awaits the winner of Sunday’s Gonzaga/Iowa tilt for a spot in the Elite Eight.

Kind of funny, isn’t it?