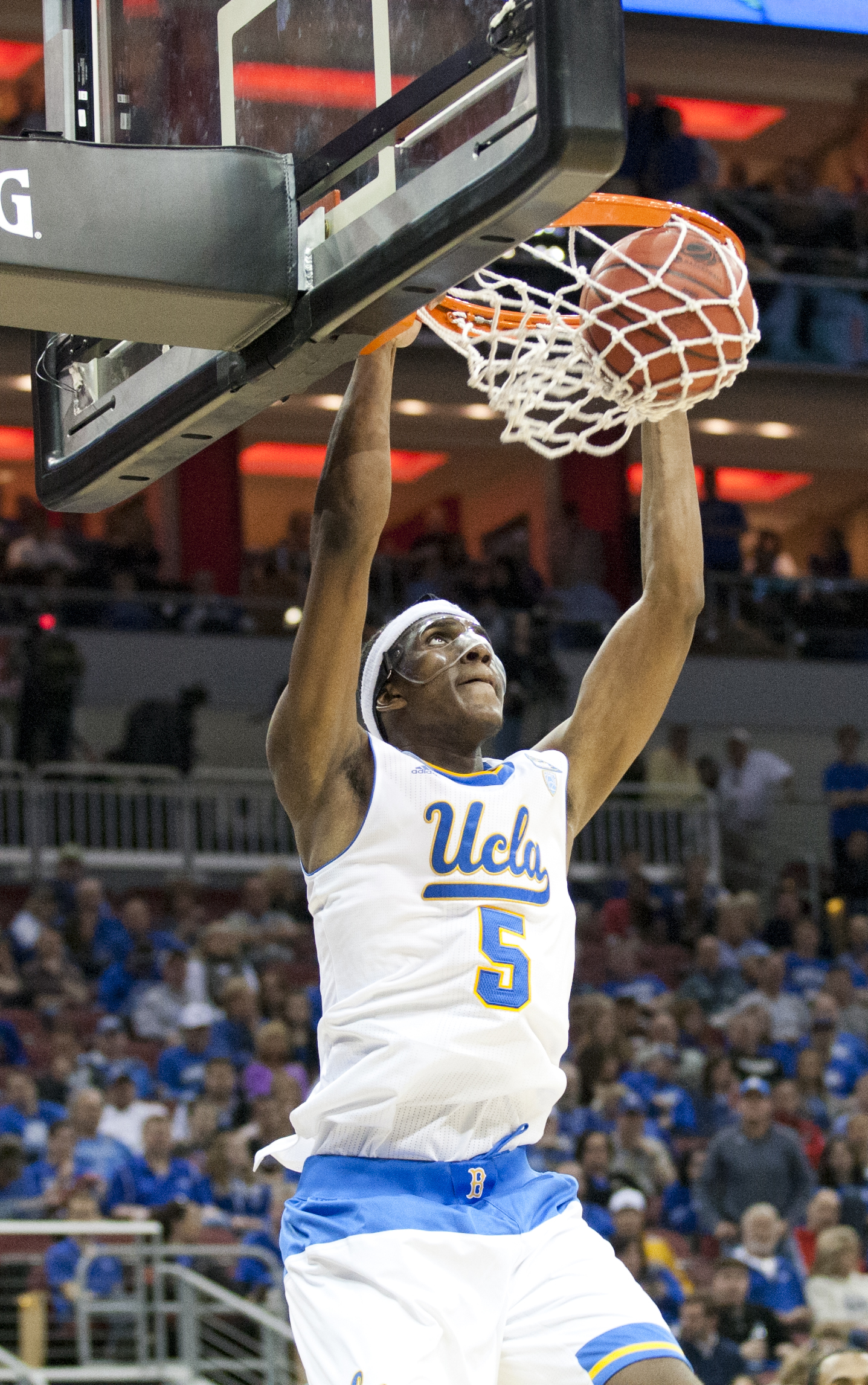 Freshman forward Kevon Looney played an integral role in UCLA’s dominance of UAB in the NCAA Tournament Round of 32 Saturday. Looney and his partner in the frontcourt – junior forward/center Tony Parker – accounted for 38 points and 23 rebounds. (Katie Meyers/Daily Bruin senior staff)

LOUISVILLE, Ky. — When Steve Alford walked off the court at the KFC Yum! Center Saturday, he may have felt the need to pinch himself.

Because surely, UCLA’s performance in its 92-75 win over the University of Alabama-Birmingham was the stuff of dreams.

Isaac Hamilton’s 36-point explosion against USC in the Pac-12 tournament was nice. Bryce Alford’s 27 points on 9-of-11 3-point shooting was a godsend in UCLA’s last-minute win over Southern Methodist University Thursday.

But UCLA has reached this point of the season because of its ability to dominate inside.

And Saturday’s game was that style of play executed to absolute perfection.

All year, the Bruins have emphasized the importance of playing inside-out – that is, getting their bigs involved early to free up space on the perimeter. It was a sound strategy, too – one that turned UCLA’s season around.

UCLA’s nonconference season was marred by poor shot selection and the ball dominance of its guards, but once Pac-12 play started, the Bruins realized that few teams can counter the size and ability of freshman forward Kevon Looney and junior forward/center Tony Parker.

So UCLA began focusing on playing through its bigs, and the results were never more evident than Saturday.

Parker scored a career-high 28 points on 11-of-14 shooting and 12 rebounds. Looney added another 10 points to go with his 11 rebounds. And as a team, the Bruins scored 52 of their 92 points from inside the paint.

“Today’s a great example of what we can do on offense,” sophomore guard Bryce Alford said.

UAB’s defensive game plan only made things simpler for UCLA. After Alford’s nine 3-pointers Thursday, UAB seemed more concerned about limiting UCLA’s perimeter shooting than its post play, even as the Bruins completely dominated the paint. And the Blazers didn’t budge.

Even after Parker’s 19-point first half, UAB rarely double-teamed him, preferring to stick close to Alford by the 3-point line. The decision shocked the Bruins, but they weren’t complaining.

“I’m always surprised when somebody doesn’t double team (Parker) because he’s a force down low when it’s man to man,” Looney said.

UCLA’s inside dominance wasn’t limited to the offensive end. The Bruins also held the Blazers to just 22 points in the paint and won the rebound battle 41-26.

Although the lopsided numbers say otherwise, UAB is not a pushover in the paint. Coming into Saturday’s game, the Blazers had been outrebounded in just 13 of their 35 games. On Thursday, UAB humiliated No.3-seed Iowa State on the glass, grabbing 19 offensive rebounds and owning a +15 rebounding differential in the upset win.

Furthermore, the Blazers have just as much frontcourt size in their starting lineup as the Bruins, with two 6-foot-9-inch forwards mirroring the heights of Parker and Looney.

So what UCLA was able to do against UAB shows just how good this team can be when it plays the right way.

UCLA turned itself into a winning team behind the play of Parker and Looney in the Pac-12 season. The Bruins’ bigs propelled them into the Sweet 16, past all the doubters.

Now, if they can play the way they did Saturday, the Bruins look capable of hanging with nearly any team left in the tournament. And they know it.

“The sky’s the limit for us,” said senior guard Norman Powell.

It may sound crazy coming from a team many didn’t think deserved a spot in the tournament. But after Saturday, it may not be too far from the truth.