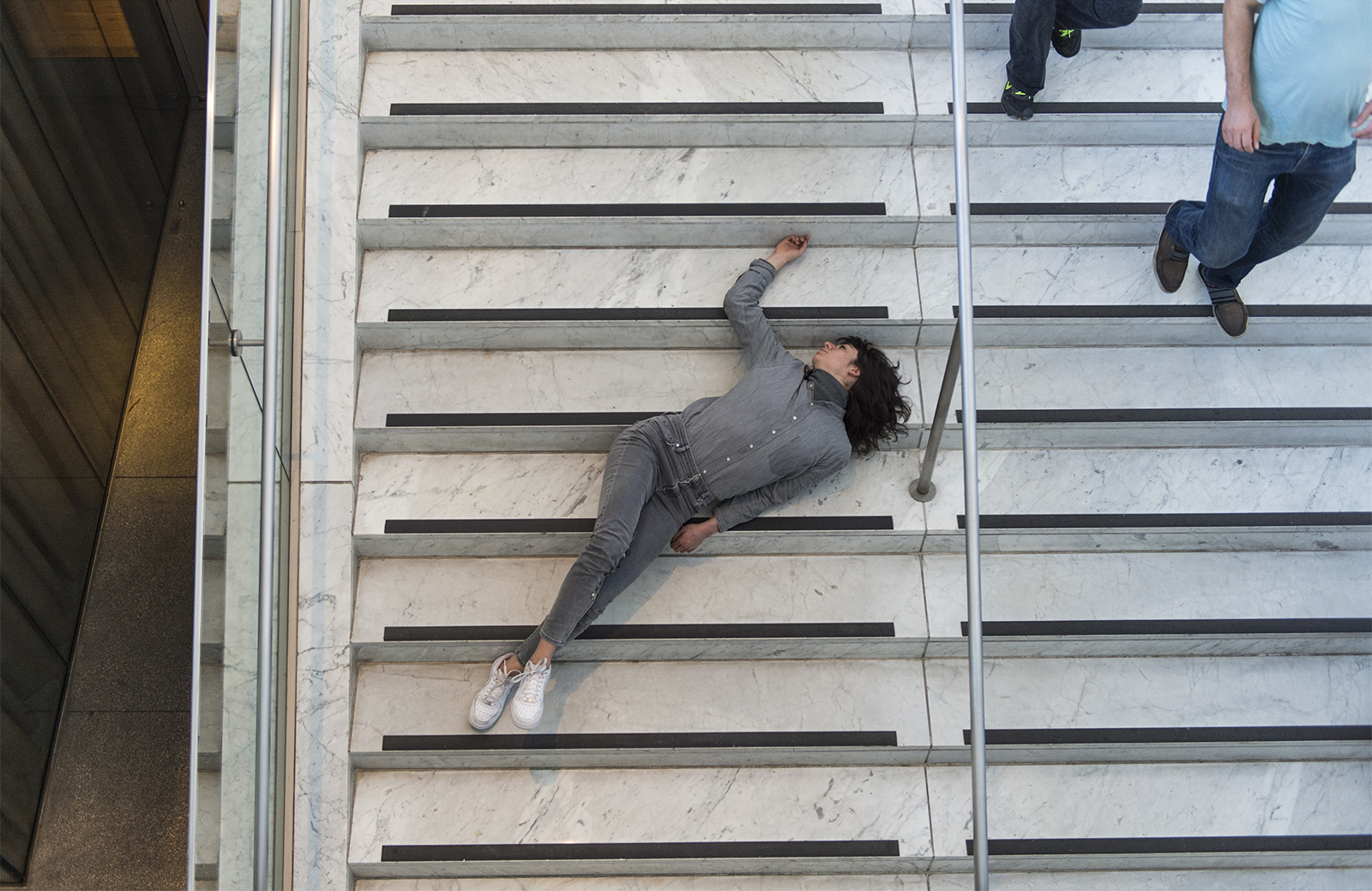 Maria Hassabi’s “Plastic” exhibition at the Hammer Museum features dancers sprawled out around the grounds of the museum.
(Max Himmelrich/Daily Bruin)

In a technologically-driven society where attention spans are increasingly conditioned by the immediate fulfillment of our digital devices, there exists a group of dancers whose languid movements challenge the contemporary human. This is a challenge posed to not only divide the viewer’s attention in the singular space of performance but also hold it there in order to comprehend the narrative of movement.

From Jan. 31 to March 1, the Hammer Museum hosted the live installation “Plastic” by choreographer and artist Maria Hassabi. “Plastic” features a group of dancers who, scattered throughout the museum, bridge an array of classical divides, existing not only as an exhibit, but also as a dance piece and theatrical performance. In doing so, “Plastic” demolishes the notion of the fourth wall that serves as a dividing force between the reality of the performers and viewers.

Upon entering the courtyard of the museum and turning left, the viewer encounters the first performer of Hassabi’s “Plastic.” Opening the doors of Gallery 6, the most prominent experience occurs in a blinding instant. Faced with extremely bright lights and deep resounding music, audience members find themselves in a black room with multiple lights set in its right corner. In the distance, to the left is a single dancer, sculpture and theatrical performer.

With contrasting enactments of static and motion, emotion and passivity, the dancer in Gallery 6 sets the stage for the other performers who all manage to heighten the ephemeral structure of human movement and expression. In doing so, Hassabi’s work expresses yearning, contemplation, pain and melancholy, distilling the chaotic and dismissive repetitions of everyday existence into a comprehensible narrative of the human experience through gradual movement.

The dancer stands still, mid-walk and wears a simple costume consisting of a gray shirt and black pants that posit her as no different than the audience members that gaze upon her. Moving slowly down to the ground, her head transitions from being upright to cast down until it settles upon her knees. When she raises her head upright, sometimes her eyes open and others times they close. One must wonder why. With these questions, a story is born for those who remain to view it play out.

Laying vertically on her back halfway up the stairs leading to the third level of the Hammer is an additional performer. While her more dramatic and sprawled rotations differ drastically from those of the figure in Gallery 6, the same reverberating music continues on in her domain of transience. She is by far the most fascinating of all of the figures, displaying evident pain through her disjointed limbs and longing eyes. Only the source of her suffering remains unknown.

Just as the blinding spotlight effect in Gallery 6 allowed audience members to feel like the performer they looked upon, the fully lit public space on the third level of the Hammer further distorts the traditional mise-en-scene of “Plastic” by aligning both performer and viewer in the same domain.

The figure closest to the stairs on the third floor uncannily blends into the audience for moments at a time, suddenly walking at a normal pace, before becoming still mid-walk with both hands rested upon his right hip. After a few moments he walks once again before exiting through a door atop the stairs.

The final performers of “Plastic” remain side by side. While one figure stands upright with her head down, the other sits up upon the ground, leaning back in a relaxed position with her arms behind her. As the woman on the floor rotates from a casual sitting position to one on her stomach, the other figure begins to retreat down to the ground, back hunched and head down.

Through each movement, the women on the third floor express a wordless story that is, just as their movements, purely distinctive. The audience members that stay to see a full range of movements retain the power to view these stories, simultaneously augmenting the performance through their mere presence. Each audience member is forced to be conscious of one another in a way that has the potential to alter the analysis of each dance.

While “Plastic” succeeds in revealing an array of stories usually eclipsed in the rapidity of movement, the work falters where it remains dependent on the extended patience of the viewer. While a few remained long enough to see the dancers actually alter their positions and display varying emotions, the majority of museum-goers entered and exited the theatrical space after a few moments, seeing limited, if any, movement. In other words, they missed the performance itself.

With an installation that is also a direct challenge to the attentiveness of its viewers, “Plastic” remains a work whose repertoire reflects either a denial of its times or a subtle tactic of demanding change in a fast-paced world.