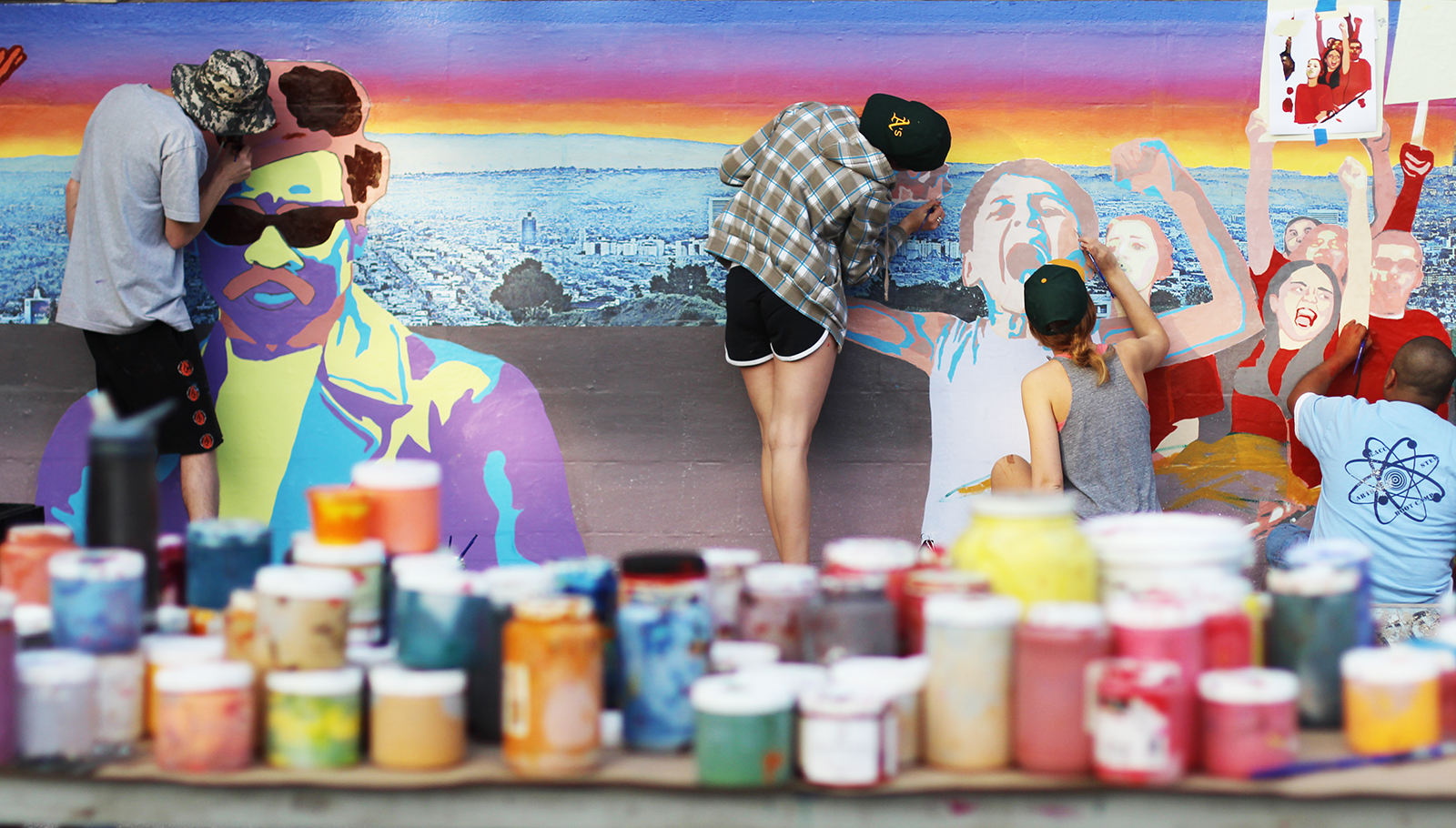 Students from the world arts and cultures/dance and and Chicana/o Studies course “Beyond Mexican Mural: Beginning Muralism and Community Laboratory” use a multimedia approach to depict important elements of Los Angeles history and culture near [email protected]’s lab in Venice, Ca. (Heidy Cadena/Daily Bruin)

A young man bows to a woman, his height complementing her graceful posture as her skirt swings to the beat of salsa. Another pair joins them, moving delicately up the ramp of a bus filled with monarch butterflies.

Others wait in line to enter the bus, frozen in mid-movement as the butterflies wrap around the dancers in a whirlwind of color. The scene, part of a 60-foot-long mural, then transitions through images depicting stories of the urban life, which unfolds the city’s social history under the distinctive Los Angeles skyline.

Created over the course of two quarters, the current mural depicts the life and social history of Los Angeles and includes scenes that discuss homelessness, racial tension, the immigrant experience and beloved landmarks familiar to both visitors and locals.

Baca said some scenes, such as those depicting the Los Angeles riots of the ’90s, represent what Baca describes as dark times in the city’s history when racial violence and lawlessness ran rampant, forcing students to discuss controversial topics such as racism through art and metaphor.

“There’s a young woman whose arms are outstretched, and the city’s on fire in the background, representing the two big riots Los Angeles has seen,” Baca said. “Blood is on the ground, and a brick and a baton indicate where the violence emanated from: people throwing bricks through windows and the police violence.”

The mural is the focal point of “Beyond Mexican Mural,” a beginning and intermediate lecture offered in conjunction with the Digital Mural Lab for two quarters every year. In the class, students develop the theme of the mural around a social message and customize it to address the culture of the community housing the mural.

This year, the mural will reside in Venice. Baca said typically one of the biggest difficulties in coordinating the class is to find a wall to paint on, but this year, the class was offered a wall at 685 Venice Blvd. by Venice’s Social and Public Art Resource Center.

The class is composed of 10 students from fields of study ranging from nursing to Asian American studies. Baca said teaching students with different backgrounds fosters creative discussion not limited to the perspective of a fine artist.

“Everybody rises to their highest capacity – those people who can draw well paint, and those people who are computer-literate lead in their own areas,” Baca said. “For years, I taught and worked only in the arts, but this project has proven that it is quite an extraordinary experience to work with people who come with different skill sets.”

Overseen by the students, the design of the mural began last quarter under the instruction of Baca. Using traditional methods of painting and the technological assistance of Photoshop, students drafted ideas in class of what they believed best represented Los Angeles as a city and home to millions of people and stories.

Baca said the integration of digital media such as Photoshop with traditional painting methods in the mural’s design opened new artistic avenues in how the mural was created.

“This mural is set in the 21st century, in the midst of all these incredible advancements in technology,” Baca said. “It’s a combination of hand-painted images and digitally produced imagery – when you see (the mural), you won’t know the difference between what (the students) hand-drew and what they designed in Photoshop.”

While the multimedia aspect of the mural was initially difficult to master, Baca’s advocacy of Photoshop and other tools helped with integrating ideas into a complex mural, said Evan Edwards, a third-year dance and world arts and cultures student.

Edwards said the assortment of artistic resources available to him and the support of his classmates helped him to explore controversial topics such as homelessness and racism and translate them to visual art.

Second-year nursing student Cristina Girod said the scenes, while occasionally disturbing, exemplify what she believes to be the purpose of art: to bring to light social issues in a medium everyone can understand.

“In Venice, we have random people stop by and look at it, and I think it’s starting a conversation that definitely needs to be had,” Girod said.

An overarching goal of the project, Edwards said, is to draw people out into the city and explore Los Angeles with a fresh perspective. While much of the experience of muralism was new to the students, Edwards said the creativity required to visually articulate what Los Angeles meant to him was a valuable lesson learned.

“People are stuck in their little bubbles near campus, but there is a lot of social history in Los Angeles,” Edwards said. “If you live in the area, that history is definitely important to know and think about.”