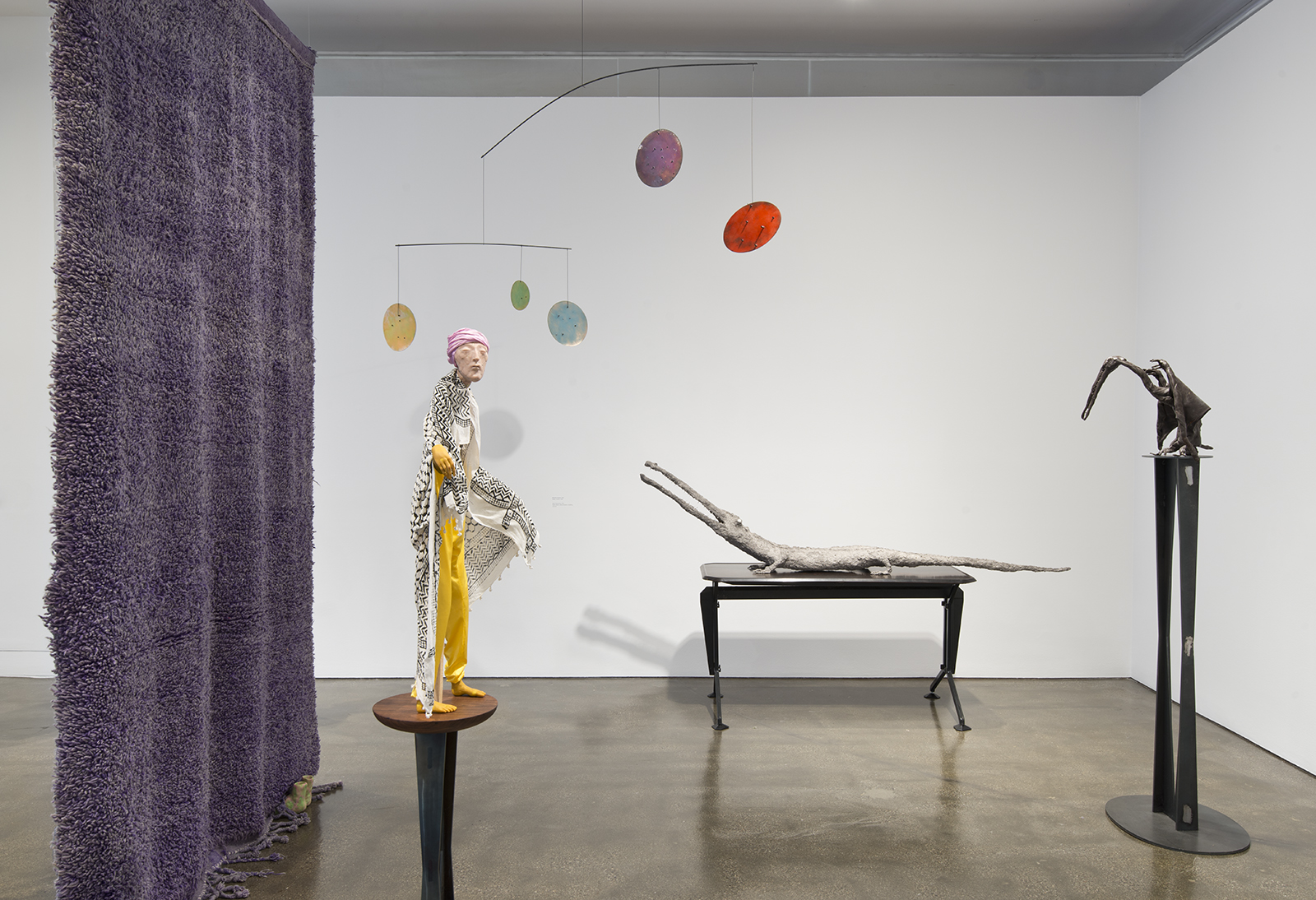 A mobile of suspended disc-shaped meteorites gently sways above various forms and figures. Akin to the cosmos that hover above them, these figures, both human and non-human alike, too remain suspended within the passage of time.

Through March 1, the Hammer Museum’s “Francis Upritchard” exhibit presents an array of sculptures that dissolve clearly defined notions of gender, the body and connectivity through a unification of history. By freezing representations of lichen, dinosaurs and indigenous human beings in varying positions of motion together under one hanging mobile of meteorites, Upritchard’s 13 art pieces succeed in relating directly to one another with no one figure failing to represent the rhetoric of the entire exhibition as a whole.

“Taranaki Lichen” and “Egmont Lichen” are the only pieces mounted upon the exhibit’s walls. Each piece, made up of a geometrical bronze base, supports a multitude of multicolored glass orbs. While “Taranaki Lichen” has a functioning support system of nine bulbs balanced upon an intact symmetrical base, “Egmont Lichen” contains a defunct base with the remaining five orbs.

By juxtaposing these pieces together, the artist communicates a sense of what is incomplete and whole in addition to relaying the importance of connectivity through the relationship of the bulb to the base. Upritchard further successfully conveys and augments this relationship by identifying lichen, an organism that survives symbiotically, as part of her titles. This use in turn reflects the primal balances that later fittingly give rise to the more complex organisms present within the exhibit.

Beyond the minute world of lichen, Upritchard continues to articulate the motif of support through two dinosaur figures. Formed out of swirling brown balata rubber, “Piled Flipper Dinosaurs” balance atop one another.

With the smaller dinosaur standing on top of the larger, the artist’s work communicates the balance that results when figures work in conjunction with one another. In addition, by simply giving these pieces flippers for feet, the work successfully represents notions of development, completeness and time as motifs throughout the exhibit.

Upritchard maintains a representation of time-based progression via the changes in feet that take place between her remaining four dinosaur sculptures. For example, while “Chubby Dinosaur,” a balata-formed sculpture, contains flippers in addition to a fish-like tail, “Paper Spinosaurus,” a comparably larger paper mache formed figure, contains three long phalanges per foot with one incomplete stout phalange.

These simple details of progression are remarkable because of their simplicity and subtlety. By representing the evolution of a species through the development of toes, Upritchard accomplishes creating markers of distinction that work to both separate humans and past life-forms on earth while also positing humans as connected to these fellow life-forms.

Two of Upritchard’s five indigenous human figures challenge the viewer by embodying varying degrees of both male and female features. “Nincompoop” and “Step Off” both contain what may be perceived as strongly defined masculine facial features coupled with female breasts.

Through the physical details of these apparently transgendered bodies, Upritchard manages to both question definitions of what is male and female and represent both traditional and modern conventions of beauty. By creating ambiguous subjects, the artist allows subjective analysis to occur that may drastically vary from viewer to viewer.

Similar to that of “Nincompoop,” “Whizz’s” flesh is painted in a distinct manner that strays from natural colors and composition. While the flesh-colored body of “Nincompoop,” from the waist up to the face, is covered in a net-like pattern, the skin of “Whizz” is also covered in a similar pattern but made up of green flesh and pink crosshatches.

By utilizing these techniques of varying pattern and color, Upritchard visually encloses her figures in a web that works to freeze various gestures in motion. In doing so, her figures of netted flesh and almost open eyes effectively portray a people on the threshold of sleep, trapped not only in their respective bodies but also apparently in the time of the exhibit itself. The effect in turn works in its attempt to unite the fate of both humans and dinosaurs, figures who all remain vulnerable to the hanging mobile of meteorites suspended above.

Representing issues of the body, gender, time, fate and connectivity, the exhibit manages to couple an array of thematic topics alongside a rich casting of materials, color and composition. In doing so, Upritchard creates a comprehensive viewing experience that connects the stories of individual characters. This story posits that all life forms of earth are more similar when seen through their vulnerability and inevitable change.

By providing a visual basis for connectivity, the “Francis Upritchard” exhibit instigates a reevaluation of humankind’s history not as an autonomous collection of occurrences, but rather, as part of the grand narrative of time itself.