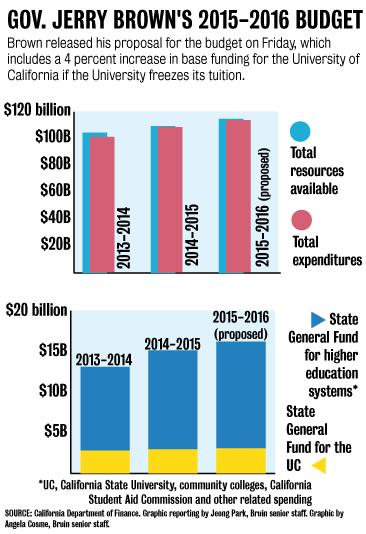 Gov. Jerry Brown released a record $113 billion state spending proposal Friday, which includes his originally planned 4 percent increase in base funding for the University of California, an increase that is contingent on tuition and nonresident enrollment remaining flat.

If Brown’s budget proposal passes, the University may have to choose between up to $100 million in additional tuition revenue and $120 million from state funding.

“We have a precariously balanced budget. … We can keep it that way, but it will require self-discipline and prudence,” Brown said at a press conference Friday. “It’s not a time for exuberant overkill.”

In a press statement, UC President Janet Napolitano said she was disappointed by the budget proposal, and said she thinks the UC needs more state funding than what Brown proposed. She also said the University is committed to further negotiations with the governor and state legislature.

“Clearly, the governor is sticking to his decision, and this is creating a kind of standoff between him and the UC,” said Hans Johnson, a higher education analyst from the Public Policy Institute of California.

Johnson said he thinks the outcome to the UC’s funding and tuition situation will likely involve extensive debate between the governor, UC and state legislature.

He added that it will probably come down to the legislature providing an alternative, such as the California Senate Democrats’ bill by Kevin de León, that will bridge a compromise between the two parties.

Kevin Sabo, chair of UC Student Association Board of Directors, said the state legislature last year was more sympathetic than the governor toward allocating more funding to the University, and may influence the outcome this year in that direction.

“But we are at a near 30-year funding low in terms of per-student state funding, if you adjust for inflation,” Johnson said. “So from a historical perspective, we could use more state funding for higher education.”

Johnson added that he thinks the state is moving toward a high-tuition, high-aid model.

Brown also called for the University to set up a committee, staffed by state administration and the UC Office of the President, to look into reducing the University’s cost structure as a way to avoid a tuition increase.

“I think the University can be a fine university living within the funds that we have appropriated,” Brown said at the conference.

In a request Brown sent to Napolitano, Brown said the committee should look into five areas – including three-year graduation pathways, clearer transfer degree requirements and online courses – during January’s regents’ meeting. A preliminary report by the task force, if formed, is expected in March.

In a Friday press release, the UC Student Association called for the inclusion of student representation during the negotiation process between the UC and the state.

“What is notably absent from this committee are faculty, staff and students – other constituent groups within the UC,” Sabo said. “Students contribute the most to the University’s budget, so if the state is involved in the negotiations, all the more should students be.”

It is unclear how much the University will be able to cut costs further, Johnson said.

“There has been no evidence over the last 10 years that universities have become less cost efficient,” Johnson said. “The large tuition increases have been because of falling state support and not because the UC has become more inefficient, but there is no way to assess whether the UC could be more efficient.”

Proposition 30, a measure approved by voters in 2012 that brings in additional tax revenue to help fund education, will expire at the end of 2016. At the last UC regents’ meeting, some University leaders and students expressed disappointment that the state has not given more money to the University after members of the UC advocated for the proposition’s passage.

Brown, when asked if he plans to extend Proposition 30, said the proposition was meant to be temporary.

“That’s a temporary tax, and that’s my position,” he said at the conference.

H.D. Palmer, California Department of Finance spokesman, said Proposition 30 was intended as a temporary measure to maintain revenue for education during the recession, and long-range economic projections show that state revenue growth will continue even after Proposition 30 expires.

Palmer said Brown was also against raising nonresident tuition. When asked Friday about nonresident enrollment as a way to increase revenue, Brown said he does not think nonresident students should be seen as a “financial mechanism.”

“I think there’s a lot of concern that people can’t go to the University because someone is coming in from 5,000 miles away,” he said. “We have to make sure that Californians have the maximum opportunity (at state universities).”

State financial aid, including Cal Grants and the Middle Class Scholarship, will cover any increase in tuition should the University choose to do so, said Ed Emerson, chief of the federal policy and programs division at the California Student Aid Commission.

Ben Allen, who represents Westwood in the state senate and sits on the state Senate’s budget and fiscal review committee, said he thinks more money should have been allocated to public higher education in the budget.

“We have to make sure the governor understands how important it is to the state to invest in public higher education,”Allen said.

Allen said he thinks the important step forward is to support the negotiations that will find a resolution balancing the University’s budget without having to raise tuition. He added that assembly speaker Toni Atkins plans to open up a “line-by-line” examination of the UC’s budget for the legislature to study and the University administration to justify.

Sebastian Ridley-Thomas, the state assemblyman representing Westwood, said that he is confident that Brown and the UC will arrive at a resolution due to their shared goals of maintaining a good public higher education system.

“(Brown and Napolitano) are of one mind on promoting a world class institution, of one mind on making sure California’s golden promise extends to the next generation, and I am more than confident that they will move in the right direction,” Ridley-Thomas said.

The regents will discuss the budget during its meeting at UC San Francisco, which will be held on Jan. 21 and Jan. 22.