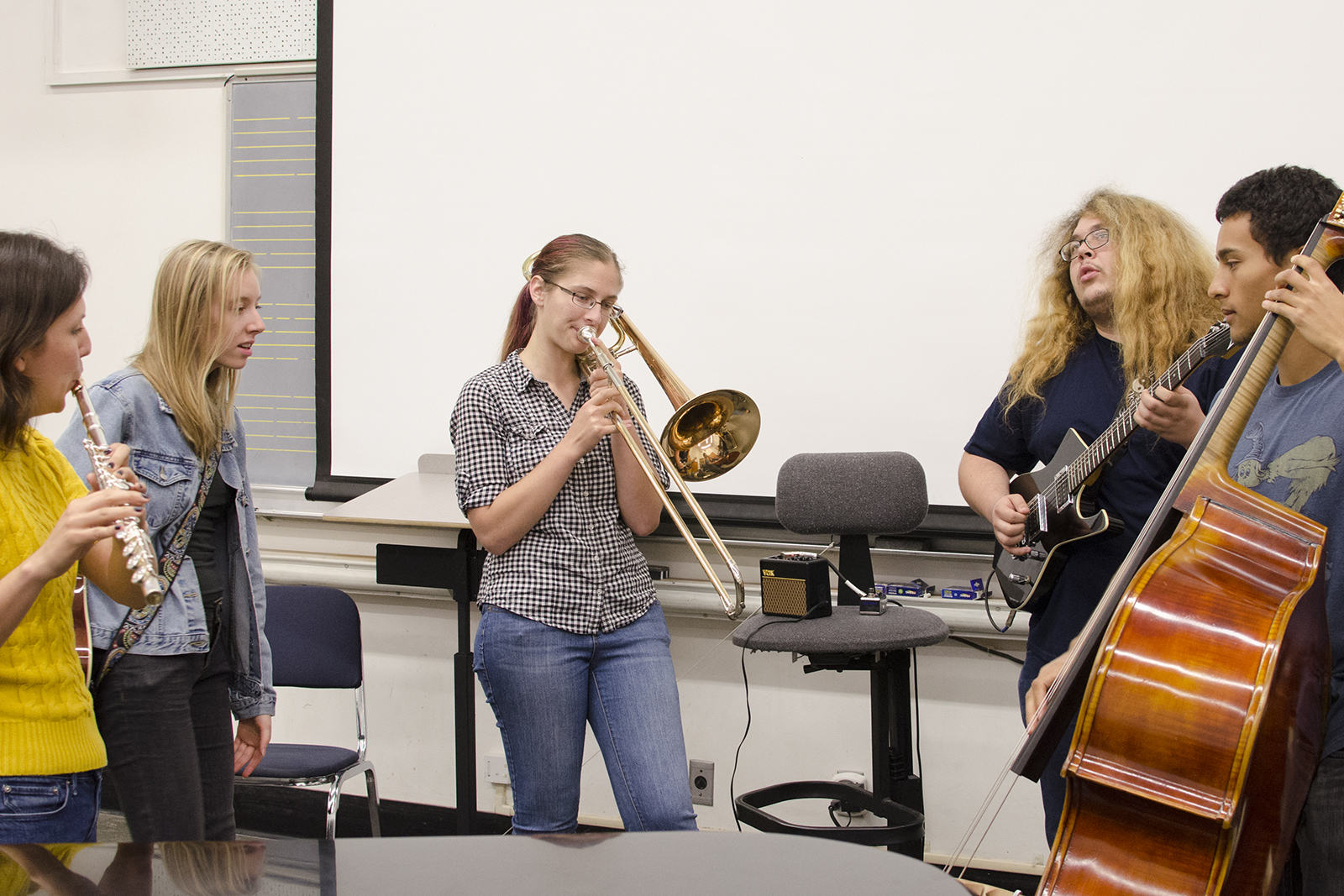 Omni-Musicality Group, a world music ensemble at the Herb Alpert School of Music, will perform at the Fowler Museum Thursday. The group meshes improvisations and sound recordings to combine genres and styles.
(Daniel Alcazar/Daily Bruin)

First comes tuning meditation. Musicians and audience members alike sing and listen to the sounds of their voices filling the air. Then comes a jazz number with a rhythmic twist. Finally, a cover of Britney Spears’ “Toxic” is done in the style of the second line tradition of New Orleans’ brass band parades.

Eric Schmidt, Fowler Out Loud coordinator and a doctoral student in ethnomusicology, said this wide range of musical traditions is typical of the UCLA music department’s Omni-Musicality Group. Otherwise known as the OMG, this world music group will showcase its take on musical improvisation with performers from a variety of musical backgrounds at the Fowler Museum Thursday.

The OMG’s performance for Fowler Out Loud will feature the members communicating musically through their chosen instruments, which range from a flute to a guitar, their voices and their bodies. The group has also been working on implementing field recordings into its performance as well as increasing audience involvement through segments like tuning meditation, which includes the performers and audience aligning their vocal pitches while singing.

After participating at the University of Guelph’s graduate student colloquium in Ontario, Canada, Alex Rodriguez, a doctoral student in ethnomusicology and the OMG’s co-director, said he was inspired to form this ensemble at UCLA last year. Rodriguez said meeting other graduate students who worked with musical improvisation in different ways opened his ears to how special this style of music is.

“All of the most interesting music that is being made today is being made across genre borders,” Rodriguez said. “If (not working from a playbook) is a fundamental aspect of what makes music interesting today, in the 21st century, then the idea of this ensemble is to actually train in working on doing that.”

Aaron Hogan, a third-year music history student and guitarist for the OMG, said unlike many of the other ethnomusicology ensembles at UCLA that specialize in a particular culture’s music, the OMG isn’t limited in this way. Hogan said this is because of its intercultural quality that frees it from having to concentrate on emulating a specific sound or fitting into a particular genre.

“This ensemble is about challenging what people’s ideas about improvisation are,” Rodriguez said. “In every single (culture) what it means to improvise is a little bit different.”

Rodriguez said the OMG’s curriculum for this quarter is focusing on this exploratory attitude of what the group can do with sound. With virtually no limitations, Hogan said the ensemble also concentrates on embracing the organic moments that come with the OMG’s style of improvisation.

“Every piece you play, even if you hate it, is beautiful because you’re only doing it once,” Hogan said. “It’s never recreated; it’s never going to happen again. It’s literally there, then gone.”

Rodriguez said every performance differs because the group tries to focus on its relationship with the specific site it’s playing at. As opposed to the more traditional stage setup and dimly lit room of Schoenberg Hall, which is where the OMG last performed, Hogan said Fowler’s open-air courtyard space will allow for more audience involvement.

Recently, the OMG has been experimenting more with technology. Rodriguez said the members plan on incorporating recordings they have taken of the campus environment to create a soundscape for their next performance. He said they spent some time around campus just listening to what it sounds like to be at UCLA.

“We’re experiencing (the campus) all the time, but if you take a recording device and turn it on and have a microphone and walk around, (the experience) changes because of the way you’re listening,” Rodriguez said.

In addition to capturing the nature of the campus through sound, Hogan said segments involving trombones, flute, guitar, bass and vocals will be performed Thursday.

During its rehearsals, the OMG tries to agree on the general frameworks for upcoming performances while still leaving room for improvisation play for when the members hit the stage.

“It’s about always coming back to reminding myself of what the point is in the first place, which is that we really don’t know (what’s gong to happen),” Rodriguez said. “That’s actually what makes it exciting.”

The OMG is smaller this year with six members as opposed to the 12 of last year. Still, Rodriguez said it has a wide mixture of talents from all three of UCLA’s Herb Alpert School of Music departments – ethnomusicology, music and musicology – as well as the department of comparative literature, which culminates in a rich musical pallet.

“I knew that I had all of these friends who were such great musicians in all of these different traditions, but we really never had a chance to play together,” Rodriguez said. “The idea was to make a space so that, hopefully, future cohorts in the (Herb Alpert) School of Music here will have some space to be able to play together despite the differences in styles and genres.”