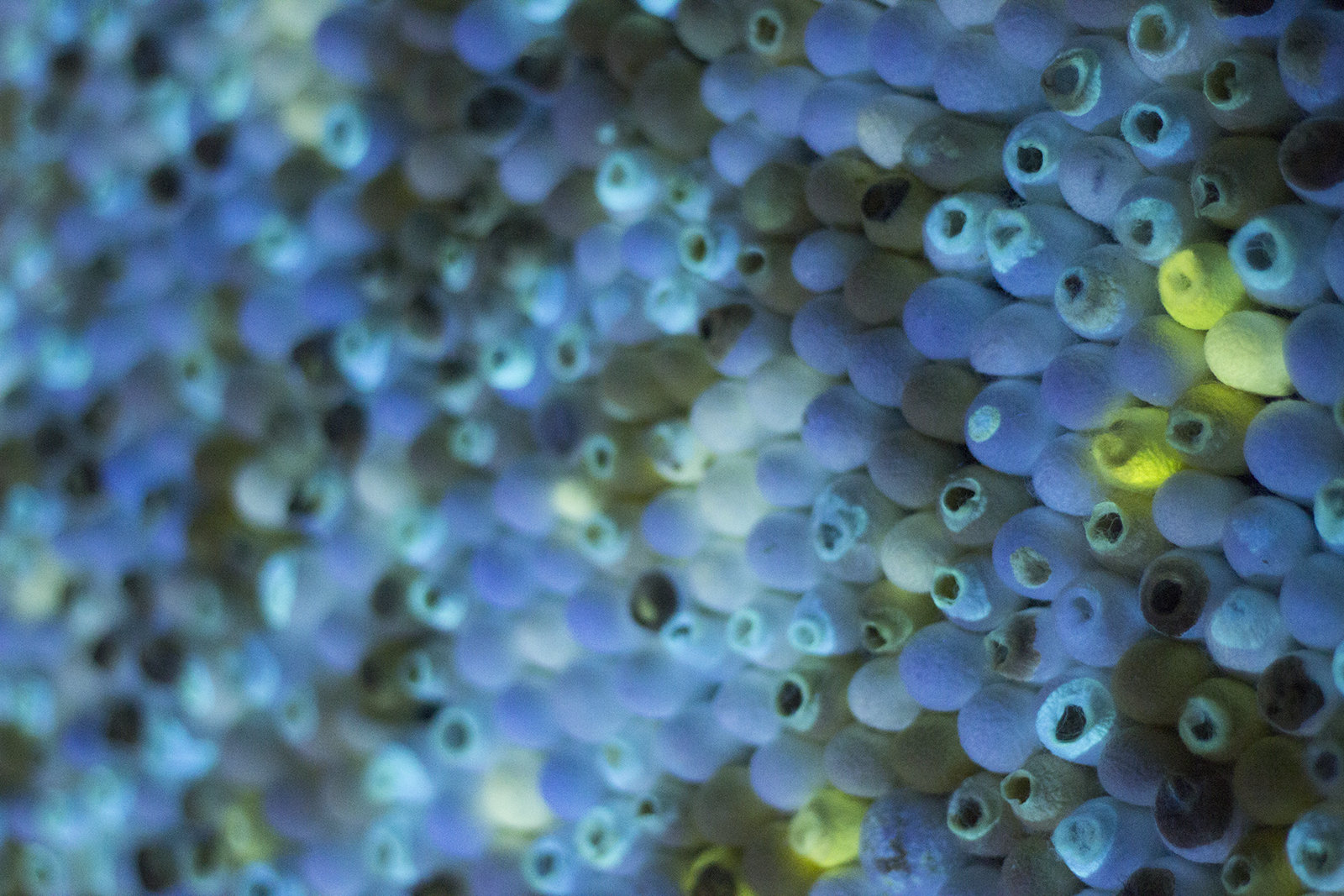 “Series: Inhabitants of the Land of Silk” is an exhibit presented by the UCLA Art|Sci Center and the UCLA International Genetically Engineered Machine. The collaborative exhibit aims to tell the threaded stories of silk both within the art studio as well as in the lab.
(Felicia Ramirez/Daily Bruin senior staff)

Points of fluorescent light peek out from a mass of tiny cocoons, the result of many cycles of ravenous feeding and part of an exhibit dedicated to a seemingly benign substance – silk.

“Seres: Inhabitants of the Land of Silk,” an exhibition put on in partnership between the UCLA Art|Sci Center and the UCLA International Genetically Engineered Machine team, aims to tell the many threaded stories of silk both within the art studio as well as in the lab.

Mick Lorusso, the curator of the exhibit and exhibition coordinator with the UCLA Art|Sci Center, said silk has a magical quality that makes it an inspiration across disciplines.

“Silk has been revered for thousands of years. It’s truly as valuable as gold and it is really one of those highly prized materials and I think it’s because of our relationship to our perceptions.” Lorusso said.

“Seres: Inhabitants of the Land of Silk,” features the work of Jason Fahrion, an Orange County-based artist who uses the ancient process of sericulture, or the raising of live silkworms to create organic mosaics of spun silk.

Fahrion, a self-described “science burnout,” worked for years studying the effect of bullets on the human body before hanging up his lab coat and pursuing his passion of creating art.

“I had this moment when I was looking out at the beauty of the redwoods outside my lab in UC Santa Cruz and I came down and I was in this room of cadavers,” Fahrion said.

Within his new career as an artist, Fahrion looked for ways to incorporate science and the natural environment into his work.

He found the answer in an unexpected place – a memory of an elementary school lesson on the life cycle of the silkworm.

“I was intrigued by the metaphor of metamorphosis in the animal, something that can change shape and shape-shift and become other things through different life spans,” Fahrion said.

This realization led to a large scale harvest of mulberry leaves in his community to feed the hundreds of silkworms living out their lives in his garage, an activity that Fahrion said garnered more than a few sideways looks from strangers.

“Raising the silkworms and separating the leaves from the cocoons is an exercise in patience and diligence.” Fahrion said. “I think a lot of art is struggling through the process and having faith in the process of what you’re doing.”

The technique for raising silkworms has changed little over hundreds of years, a fact which Fahrion said makes him feel a visceral link with the silk he works with.

But the thread that launched a thousand cross-continental caravan journeys is getting a laboratory upgrade for the 21st century, a transition that can be seen within the exhibition.

The UCLA iGEM team, an undergraduate organization which focuses on synthetic biology, a field of science that is associated with modifying genetic code, has its own silk dream.

David Yao, a recent UCLA graduate and the advisor to the UCLA iGEM team, said silk has a few characteristics which make it a prime target for genetic modification.

Silk is a gene product, which means that its genetic sequence can be modified to change its physical properties, but Yao said that is only the beginning of the possibilities for genetically modified silk and listed bulletproof armor and biomedical applications as possible end goals.

Yao said the organization’s exhibit in the show takes a person through the different varieties of silk seen in the group’s experimental process including a silk solution, silk hydrogels and a powdered form of the normally wearable material.

“People are going to be thrown out of what they normally think of silk,” Yao said. “We’re going to start changing perspectives here.”

Silkworms, descendants from the creatures that helped create Fahrion’s work, will also be shown at the exhibit, munching noisily through pounds of mulberry leaves.

The collaboration between the scientists and the artists was fostered by the UCLA Art|Sci Center, which operates on the premise that neither art nor science can be mutually exclusive, a sentiment shared by both Yao and Fahrion.

Yao said he thinks art is essential in communicating abstract scientific ideas to the general public, while Farion said he sees art and science as pushing each other in the search for meaning.

“Art and science evolve together and they always have.” Fahrion said. “For science to translate culturally, we need art.”