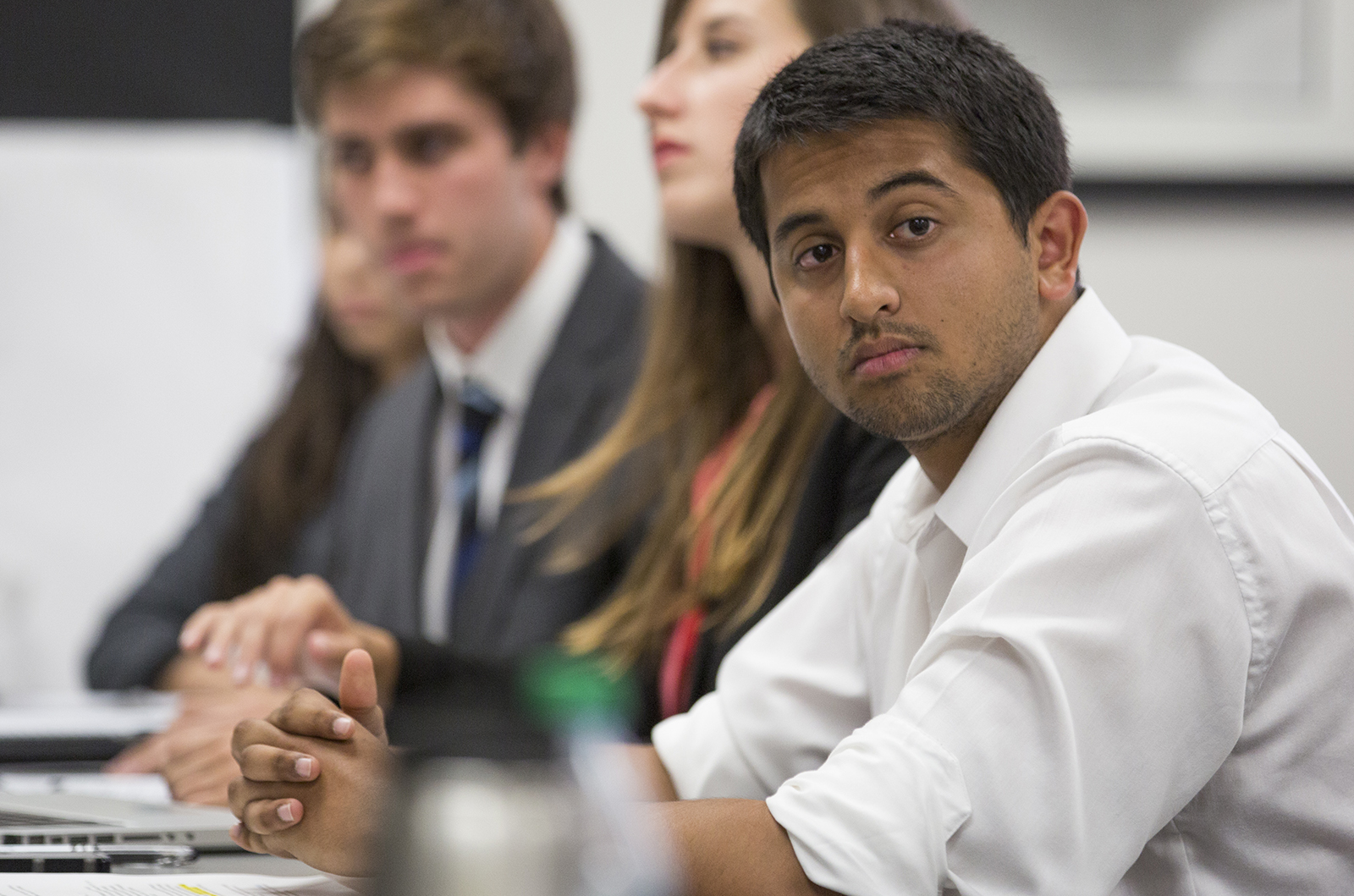 USAC General Representative Sunny Singh listens to students debate at a hearing about whether he and another councilmember engaged in conflicts of interest. (Austin Yu/Daily Bruin)

In an hours-long hearing Thursday, Students for Justice in Palestine representatives and several opposing students debated whether two former undergraduate student government councilmembers had engaged in conflicts of interest this school year.

About 20 individuals, including witnesses and campus administrators, attended the Undergraduate Students Association Council Judicial Board hearing Thursday evening. The Judicial Board is the student-run judicial arm of USAC, and hears cases about violations of council bylaws. It could be as long as two weeks before the board releases a decision in this case.

This Judicial Board case and other events related to controversial divestment-related USAC resolutions have been at the center of heated disputes on campus throughout the school year. Because of safety concerns, Thursday’s hearing was closed to the public.

In April, Students for Justice in Palestine submitted a petition to the board saying that former USAC General Representative Sunny Singh and former USAC Financial Supports Commissioner Lauren Rogers engaged in conflicts of interest in February by voting on a resolution calling for UCLA and the University of California to divest from companies that profit from the Israeli occupation of Gaza and the West Bank.

The divestment resolution in question was brought to USAC by Students for Justice in Palestine, along with other student groups. Though councilmembers voted using a secret ballot, Singh and Rogers both spoke against the resolution during discussions prior to the vote.

Students for Justice in Palestine members claimed that Singh and Rogers should have abstained from voting on the resolution because they went on sponsored trips to Israel while in office. The Anti-Defamation League, a pro-Israel lobbying group that aims to stop anti-Semitism, paid for the majority of Singh’s trip and Project Interchange, which aims to increase individuals’ understanding of Israel and is run by the American Jewish Committee, paid for Rogers’ trip.

Counsel representing Singh and Rogers during the Judicial Board hearing called the vast majority of witnesses to the stand, including the former chairman of Project Interchange and the regional director for the Anti-Defamation League.

Rogers and Singh said at the hearing that they did not use any resources from their offices to go on the trips, and they did not have any ongoing ties or obligations to the organizations.

The two former councilmembers said they felt that they were being personally attacked by Students for Justice in Palestine and that they went on the trips for educational reasons.

In her opening statement, Students for Justice in Palestine president Dana Saifan said the case should be about whether any reasonable student would assume that thousands of dollars in gifts could affect the votes and stances of councilmembers. Students for Justice in Palestine members argued during the case that it is important for councilmembers to avoid even the appearance of having divided loyalties when voting at the table.

“It is the appearance (of a conflict of interest that) is sufficient to undermine the integrity of government because it is impossible to prove what a councilmember subjectively intended with their (ties to outside organizations.)” said Laila Riazi, a member of Students for Justice in Palestine and a fourth-year comparative literature and economics student, at the hearing.

Katie Takakjian, a third-year classics student and Singh’s counsel for the case, presented a timeline during the hearing that highlighted the time that passed between the divestment resolution vote in February and the weeks before USAC elections, when the petition was filed.

Singh ran for USAC president with the Bruins United slate, which ran candidates against LET’S ACT! in the highly contentious elections. Students for Justice in Palestine endorsed all of the members of the LET’S ACT! slate this year.

“It’s our contention that there was some bias and this was a smear campaign,” Takakjian said.

Saifan questioned Rogers and Singh about the details of their trips, including the costs of the trips and the different commodities provided to them for free by the organizations. Saifan also aimed to show that Rogers and Singh had ongoing relationships with Project Interchange and the Anti-Defamation League, respectively.

In October, councilmembers voted that Singh’s trip with the Anti-Defamation League did not constitute a conflict of interest and allowed him to sponsor a different divestment-related resolution. Throughout the hearing, students who supported Singh and Rogers argued that councilmembers had set a precedent with the vote and that council has the authority to interpret its bylaws as it sees fit.

In his closing statement, Rogers’ council, Ian Cocroft, said the Students for Justice in Palestine petition was a political move and an attempt go back and change council’s vote against the divestment resolution.

Takakjian said the Judicial Board ruling in favor of Students for Justice in Palestine would discourage future students from educating themselves by going on trips such as those in question while serving in student government.

In her closing remarks, Riazi told Judicial Board members that this case could help draw clearer lines for councilmembers on what actions or favors are appropriate for them to take, clarifying an area of the bylaws that some students say they think is unclear.

“The outcome of this case has serious implications for the future of council,” Riazi said.

Following closing statements, justices extensively questioned the counsel for Students for Justice in Palestine about their arguments, as well as Singh and Rogers and their representatives.

The Judicial Board must release an official decision within two weeks of the hearing.