Artist spells out emotions through her minimalistic pieces 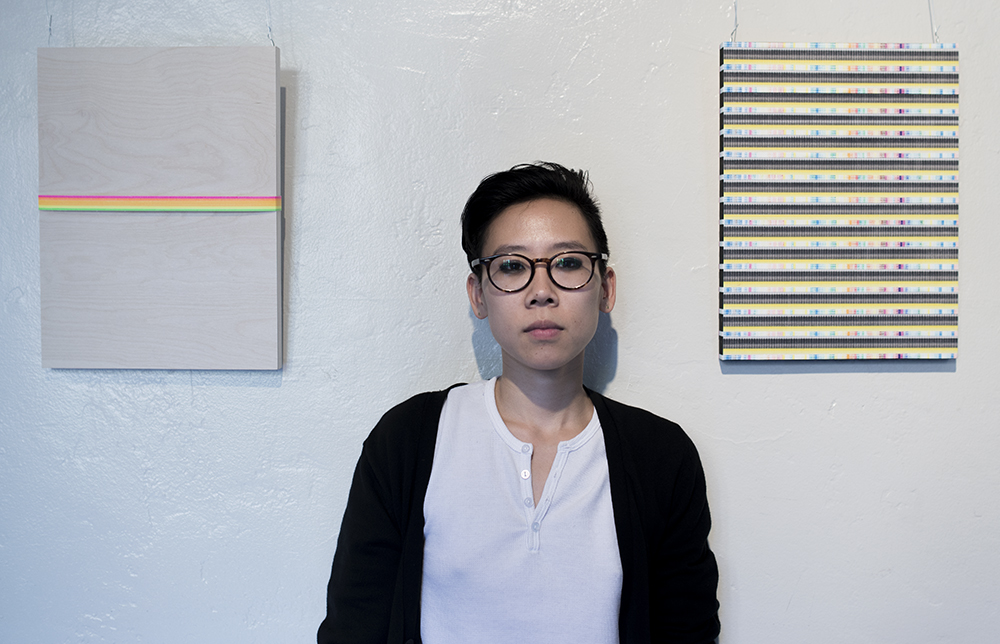 Artist Michelle Jane Lee uses her own alphabet to express herself. Her artwork, mostly bright, minimalistic paintings and drawings, features small blocks of color which represent letters of the alphabet. Lee’s work will be featured in the Kerckhoff Art Gallery until April 12.
(Miriam Bribiesca/Daily Bruin)

Michelle Jane Lee has her own alphabet. Instead of letters, Lee uses small blocks of color to express her feelings.

Most of Lee’s bright, minimalistic paintings and drawings, which are being shown as part of the Cultural Affairs Commission’s Art Series in UCLA’s Kerckhoff Art Gallery until April 12, feature this alphabet that Lee invented. Each letter corresponds to a specific small block of color. In many of the works, this alphabet is utilized to discuss Lee’s personal joys and, more frequently, her heartbreaks.

Although Lee’s earlier works also took inspiration from her personal life, her methods have changed. Previously, Lee translated her personal love letters into visual works, including an 85,000-word love letter which took her a year and a half to turn into a 30-foot-long piece composed only of small, bright cubes of color.

Lee said most of the pieces in the Kerckhoff display are more focused than her past works and that the color alphabet expresses a single word or name instead of an entire narrative. And, in addition to the color alphabet, Lee painted large, curvy shapes and other details in many of the newer works.

For example, the piece “There Never Was No Other” is composed of a single skinny rainbow-colored pencil stripe – which spells out a name in Lee’s colored alphabet – in the middle of a wooden board. Black paint that looks almost like ink borders the panel.

Lee said that this piece, like all of her work, is inspired by love. Lee even jokes that she’s the Taylor Swift of the art world because all her work is about her feelings and experiences with love.

“I have been really loud and adamant about the fact that my work is about being heartbroken, or wanting or needing someone,” Lee said.

The titles of her pieces, including “All Quite Useless, Wasn’t It?” “Wish I’d Never Seen Your Face” and “Dear, You’ll Never Guess,” hint at Lee’s feelings about the words expressed on their surfaces.

To create her works, Lee thinks about the emotions and ideas she wants to express, selects the right words, translates them into her alphabet and then adds other visual elements. This process inspired Kylie Carrigan, director of the CAC Art Series and a fifth-year Design | Media Arts and psychology student, to feature Lee’s work in the Kerckhoff Art Gallery.

Carrigan said that she thought Lee’s work could serve as an introduction for many students to more conceptual forms of art.

“Most students … don’t have an opportunity to engage with work that isn’t primarily visual or aesthetic, so (through Lee’s work) I wanted to give them an … experience which is a more contemporary art practice,” Carrigan said.

Tori Schmitt, the curator for Lee’s show and a second-year art history student, said the meaning behind Lee’s art adds to the works’ bold, eye-catching visuals. Schmitt said she also appreciates the use of wood in the pieces because the wood’s imperfections become a part of the work as well.

Overall, Schmitt said she thinks the minimalistic and linear form of Lee’s work visually attracts and allows people to project their own stories onto the pieces.

“(The artworks) ask you to look at them and … to find depth of meaning within what’s presented visually … so they’re very engaging and meditative,” Schmitt said.

Through this engagement with the emotions of her work, Lee said she hopes viewers are encouraged to be emotionally honest.

“I hope that the audience remembers that … it’s not lame or uncool to be a sucker,” Lee said. “What I’m trying to get across in my work is (that) being emo is fine because we all have feelings.”