The Kitchenette to offer taste of reggae at Fowler 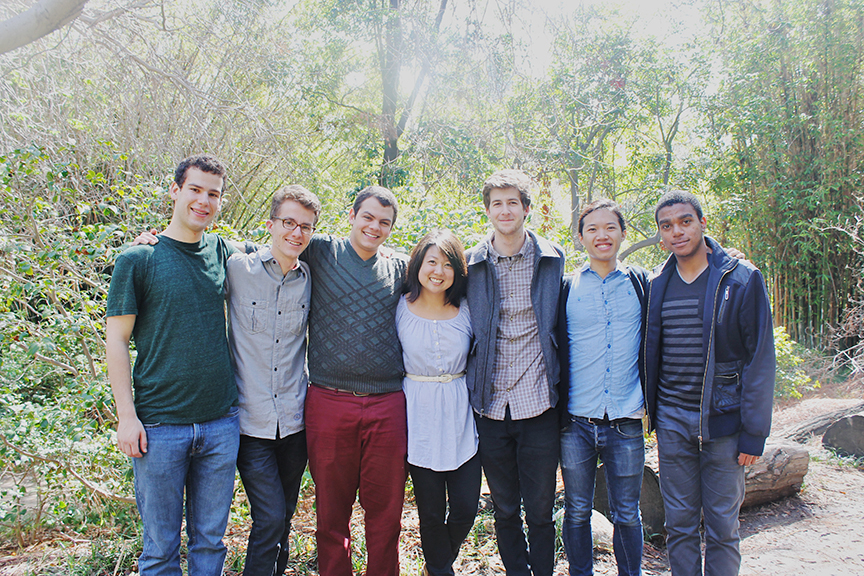 The Kitchenette, composed of seven members from UCLA band The Big Kitchen, will perform music inspired by early rocksteady and reggae artists at the Fowler Museum Thursday as part of the Fowler Out Loud series.

On some days, the Kitchenette, a group of seven UCLA musicians, can be heard cooking up covers of reggae hits or rehearsing original rocksteady and ska-influenced melodies in Schoenberg Hall.

On Thursday, however, the band will present audiences at the Fowler Museum with a musical feast, featuring songs that blend genres from the United States and Jamaica.

As part of the Fowler Out Loud series, the Kitchenette, composed of members from UCLA band the Big Kitchen, will perform pieces inspired by the music of early rocksteady and reggae artists. Specializing in the rocksteady, reggae and first-wave ska genres that swept Jamaica and America in the late 1960s and early 1970s, the Kitchenette mixes acoustic and funk to add an American twist to Jamaican folk music.

Lindsey Kunisaki, a third-year music administration student and the composer, arranger and lead singer for the Kitchenette, said the Big Kitchen, the Kitchenette’s parent group, formed from a drive to combine reggae with modern jazz harmony.

In contrast, Kunisaki said the Kitchenette’s music strives to imitate the more traditionally Jamaican sound evident in the songs of Bob Marley and Vic Ruggiero.
“We’re down to the essentials – in terms of our style, we’ve been doing stuff that’s a little more characteristic of rocksteady, early reggae and early ska than what the Big Kitchen was doing,” Kunisaki said. “That was also the reason for the name change, in order to separate ourselves from the big group.”

Previously, the Kitchenette has performed at events such as the Kerckhoff Coffee House Concert Series. However, Ryan Shickman, a fourth-year psychobiology student and a guitarist in the band, said the Fowler Out Loud concert will be different from previous gigs because of the more relaxed atmosphere at the Fowler Museum.

“In the past, we’ve played at the Kerckhoff Coffee House, but a lot of people are there to study and there’s less room to dance,” Shickman said. “The Fowler is really beautiful, so I’m really hoping there’ll be dancing there, because that was one of the most fun parts of the gigs that we’ve done in the past.”

In the concert, the Kitchenette will showcase a set of 12 pieces that include both original works and covers of popular songs. Two original songs, titled “I Hate Hummus” and “Maps,” were written and arranged by Kunisaki, and another original song, titled “Bourbon Bread,” was written by Kunisaki and Esteban Salcido, an Azusa Pacific alumnus.

The remainder of the pieces, featuring covers ranging from The Slackers’ “I’d Rather Die Happy” to The Temptations’ “I Wish It Would Rain,” were arranged by Kunisaki to highlight individual performers’ talents.

“This is an extremely talented group,” Kunisaki said. “So, for a couple of (songs), we’re trying to keep it interesting by deviating from the rocksteady style and giving the (performers) a chance to shine.”

While each performer has a musical background, Nicolo Scolieri, a first-year ethnomusicology and world music student and the band’s bassist, said the Kitchenette is comprised of members with divergent fields of study and upbringings that nevertheless share the passion for music.

Masai Marcelin, a third-year ethnomusicology student and a trombonist in the band, said being a member of the Kitchenette has taught him skills that he would not have gained in a classroom environment.

“One of the things that I learned through (the Kitchenette), ironically, is that formally knowing how to play all of my scales in two octaves hasn’t really helped me play the type of music we play here,” Marcelin said. “In this context, we play more social music, which being a music major doesn’t really help you learn.”

With the Fowler Out Loud concert, Kunisaki said she hopes that the relaxed atmosphere will help the audience participate and engage in the Kitchenette’s interpretation of first-wave ska, early reggae and rocksteady.

“Dancing would be nice, and people could also make friends with each other,” Kunisaki said. “I guess we’re about to find out if we facilitate friendship or not, but hopefully everyone has fun and we give off good vibes.”