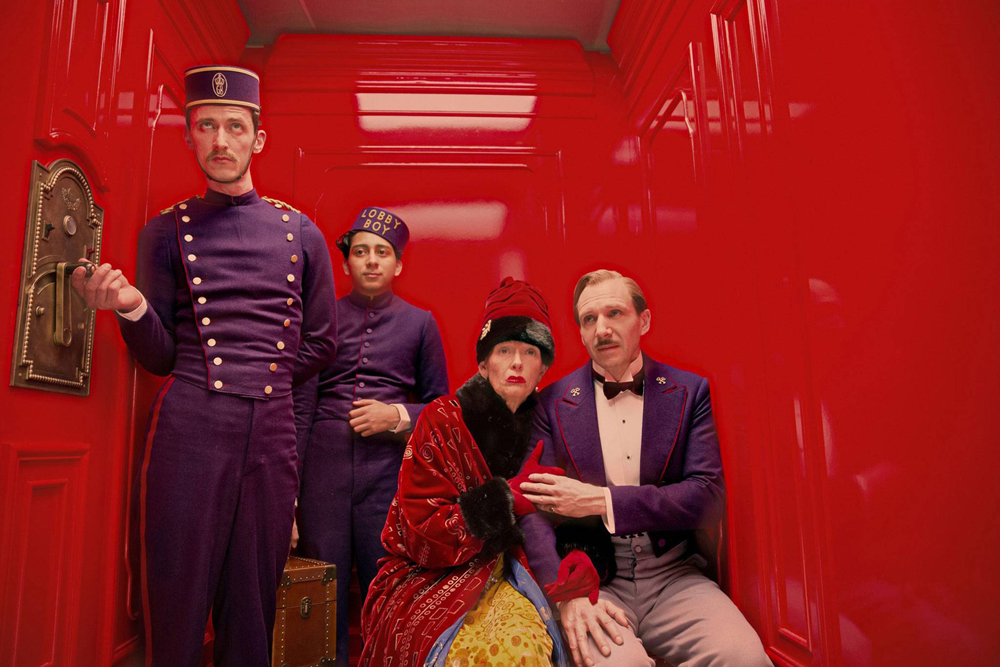 Two idiosyncratic protagonists must contend with murder, a prison break and a ski chase, among other predicaments in the thrilling, stylish, madcap adventure that is Wes Anderson’s “The Grand Budapest Hotel.”

The film recounts how Zero Moustafa (Tony Revolori), who was once a lobby boy, gained ownership of the titular hotel. Zero becomes the confidant of Gustave H. (Ralph Fiennes), the charismatic and much-loved concierge of The Grand Budapest. When Gustave is accused of the murder of elderly aristocrat Madame D. (Tilda Swinton), Zero is entangled in Gustave’s subsequent troubles and exploits.

Zero helps Gustave break out of prison with the help of Zero’s fiancée, Agatha (Saoirse Ronan), and then assists him on his run from the law, as well as extra-menacing hitman Jopling (Willem Dafoe), hired by Madame D.’s vengeful son Dmitri (Adrien Brody).

All the action takes place in a gorgeously detailed and somewhat absurd setting. The hotel itself is a pastel-pink marvel located in the invented European nation of Zubrowka. Its interior includes a bright red elevator and countless chandeliers. Elsewhere, scenes take place in a creepy museum, a gondola ski lift and a room overflowing with the mounted heads of deer and elk. Even the scenes that take place in prison are filmed beautifully.

Wes Anderson’s trademark offbeat style is evident in every frame. Those who appreciate the detailed, bright and peculiar sets in other Anderson films like “Moonrise Kingdom” will find “The Grand Budapest Hotel” even more stunning, and will relish the chance to live, however briefly, in the alternate universe Anderson creates. His touch is particularly obvious in detail: a Mexico-shaped birthmark on Agatha’s cheek, the subtitles that introduce every character and the scenes shot using stop-motion camera work serve as key examples.

However, the film’s details and eccentricities may be almost unbearable for those unaccustomed to Anderson’s work. Like all of his films, this one privileges style over substance. However, “The Grand Budapest Hotel” seems to be particularly made for Anderson aficionados. For example, fans will be delighted to see Anderson regulars Bill Murray, Jason Schwartzman and Owen Wilson in their charming cameo performances, while the unaccustomed will likely not understand their minimal presence.

Fiennes manages to bring some complexity to Gustave, who is elitist and haughty while still being sympathetic and heartfelt. Almost every scene in the film is fun and charming, but when Fiennes is included, it all shines just a little bit brighter. And while Brody and Dafoe’s characters may be undeveloped, they make excellent villains – Dafoe in particular expertly communicates Jopling’s hostility without actually speaking.

Unfortunately, many of the other characters are unremarkable caricatures. Zero is bland and spends most of his time in wonderment. There is no development of the romance between Zero and Agatha either – according to the movie, they love each other just because they do.

Although “The Grand Budapest Hotel” may be lacking in depth, this funny, wild adventure about the friendship between a charismatic concierge and his lobby boy is fun enough for it not to matter. While those who dislike camp filming styles will want to stay far away, fans of Anderson will be reluctant to leave the beautiful world he creates after the film’s 99 minutes are over.