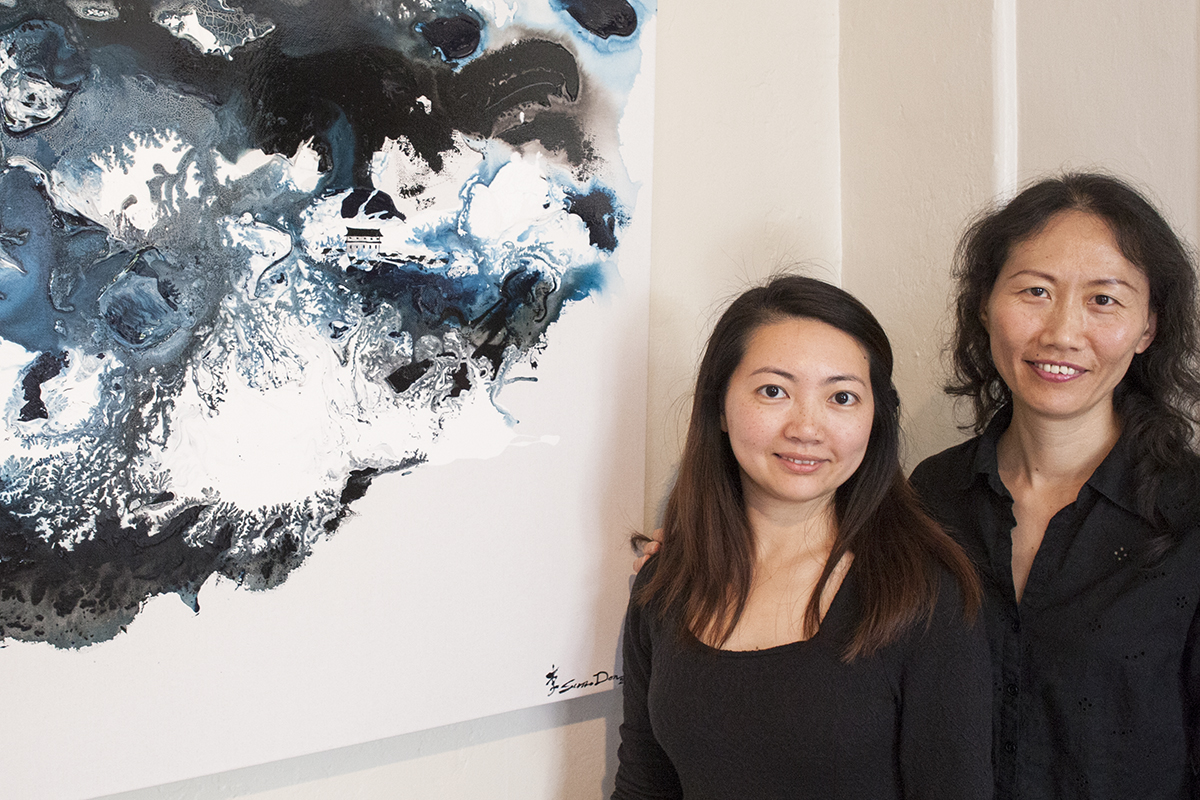 X-Power Gallery is an art gallery comprised of works by Taiwanese artist Lee Sun-Don and Ma Sing Ling. Art lead of the X-Power Gallery, Weping Kuo, and volunteer Iris Shah will be in the gallery all week in Kerckhoff Art Gallery.

When first-year political science student Carmen Crow walked into Kerckhoff Hall to get a cup of coffee, a large abstract painting of black and blue swirls caught her attention, and diverted her from her original path to caffeine.

“I was walking in when the painting drew me in. I could recognize the image was a mountain, but it caught my eye because when you move forward and progress more into the gallery, the image becomes more distorted,” Crow said.

Entitled “To Soar into a Great Destiny,” the expressionist acrylic painting is just one of the many that has attracted students like Crow to the Kerckhoff Art Gallery, on display as part of the Cultural Affairs Commission’s Art Series hosted this week.

Presented from March 2 to March 8, the X-Power Gallery is comprised of works by Taiwainese artist Lee Sun-Don and a collaborative working team of artists called Ma Sing Ling. The opening reception for the gallery will take place Thursday at 5:30 p.m. in the Kerchkoff Art Gallery.

Born in Taiwan, Sun-Don, a master of Buddhism, is known in the art world as “Master Lee” and creates contemporary work inspired by the philosophy and lifestyle of Buddhism. As a pioneer of a genre of painting called “totemic energy oil,” he has won more than 47 international awards and recognitions for his work, which ranges from painting to sculpture and installation art.

“Much of his work is oriental. Although he is a master of Buddhism and much of his work stems from it, it is not related to religion,” Weping Kuo, art lead and staff member of the X-Power Gallery, as well as mentee of Sun-Don, said.

Painted in a similar style to “To Soar a Great Destiny,” the painting “Opening the Great Mindful Eyes” features blotches of green and blue that streak across the canvasamid large portions of black paint.

These two paintings, along with another painting produced in this similar expressionist style, are a part of a series called “Wonderful Clouds.” The trio of paintings reminds viewers of landscape that is distorted.

Among the swirls of paint in these images, minuscule buildings or houses are painted in each, contrasting abstract landscapes with more concrete images.

“The work reminds you of a place you would never actually find in the United States, somewhere perhaps in southeast Asia. It almost evokes an adventurous feeling,” Crow said. “Yet, (Sun-Don) puts a house or building in each image and it helps to piece (the series) together.”

Kuo said the buildings in each are actually images of Sun-Don’s temple. She said that in this way, Sun-Don’s artwork is not limited to religion but up for viewers’ own interpretations.

“We try to avoid having people think of his art as one way. We try not to introduce the building as a temple, because a lot of the messages in his art work are broad and not defined,” Kuo said.

Sun-Don also works with other artists, teaching them and helping them to collaborate. He created and assembled Ma Sing Ling, a team of three young artists, to form an art series called “Form of Unity.” The team is comprised of self-taught artists MANIHOO, Singway and Ling Ling, who have previously worked together with Sun-Don himself, to create artwork.

“One really interesting thing about the collective and the reason why we were excited to put them on display is their collaborative effort,” Kylie Carrigan, a fifth-year fine arts and psychology student and the Cultural Affairs Commission’s Art Series director, said.

One of the group’s pieces, “Saint-Lotus – Majesty,” is one of the more cohesive works in the gallery, hanging as a long vertical canvas with dark purple flowers, and yellow and black tiling in the background.

“You wouldn’t know that three individual artists worked on it, which is very rare in the art world. Most people work individually,” Kuo said. “Master Lee directed the three of them to create this sort of unity and in a lot of ways, he achieved it, as seen in the paintings.”

Iris Shih, volunteer of the X-Power Gallery who oversees the gallery during the daytime, said the collaborative effort shows innovation.

“To my knowledge, there have been other male groups who have worked together like this, but they are the first female group of artists who have done this,” she said.

Carrigan said the physical collaboration, as well as the different cultural style of painting, isn’t something that one may usually see in artwork of the United States, and is one of the reasons why students may be attracted to the gallery.

“I think there’s something for everyone who approaches it, whether or not you have a fine arts background,” Carrigan said. “It’s definitely for people who just want to know more about different types and techniques of art that aren’t as common (here).”