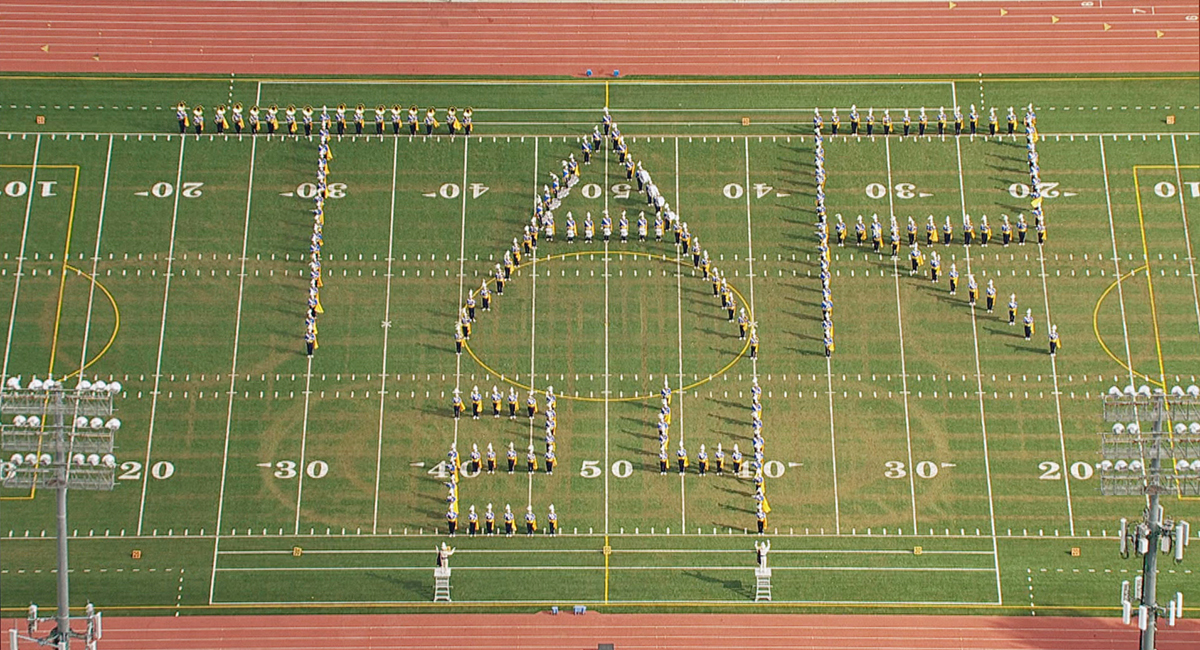 The UCLA Bruin Marching Band performed for the season premiere of “The Amazing Race,” which aired Feb. 23.

On Sunday, the UCLA Bruin Marching Band and a young couple united for the All-Star premiere of CBS’s “The Amazing Race.” While the band had to rehearse in secrecy, the couple returned to where their relationship began, on national television.

The members of the UCLA Bruin Marching Band were featured performers on this season’s All-Star edition of “The Amazing Race,” which premiered on Feb. 23. Joining them were UCLA biomedical physics graduate student Brendon Villegas and his spouse, Rachel Reilly, gearing up for what would be their second appearance on the show.

“The Amazing Race” is a television show where pairs of competitors traverse lengths of the globe, from the United States to lands as far as Chile to Tanzania, to complete challenges. Reilly and Villegas, who both met on CBS’s reality TV show “Big Brother,” were last seen engaged on the 20th season of “The Amazing Race” where they placed third.

As a victor of season 13 of “Big Brother,” Reilly said their drive to win “The Amazing Race” is only heightened.

But with the desire of starting a family and owning a home in Los Angeles, Reilly said the couple’s race to win the grand prize of a million dollars is also more than a game; it’s a potentially vital stepping-stone to their next stage in life.

“If we win, it’s money that we get to spend together. That’s a motivation. It makes us more and more driven,” Reilly said.

While Villegas and Reilly were accustomed to the presence of cameras, many members of the UCLA Bruin Marching Band had to adapt to being filmed for the show’s premiere.

“This experience was different because instead of being part of a huge event with a huge audience, it was very private and secretive and no one was around,” said Alyssa Lee, a third-year molecular, cell and developmental biology student and an alto saxophone player.

As the cameras weaved in and out of the band, Andrea Chaikovsky, a third-year molecular, cell and development biology student and rank leader, said that her own personal concentration came into play.

“It was definitely different trying to stay focused on what you were doing because they always said, ‘Don’t look at the camera,’” Chaikovsky said. “It took more concentrated effort than a normal marching performance. ”

Members of the band volunteered for this opportunity without knowing what they signed up for. It wasn’t until UCLA Band Director Gordon Henderson gave out the music that suddenly everyone understood what the mystery show was.

“People finally got selected and (Henderson) handed out music. It didn’t say what the title of the show was,” said Connor Hipwell, a third-year biology student and trumpet player. “The trumpets went off to the side and played it. That’s how we knew it was ‘The Amazing Race’ at that point.”

In lieu of the show’s secrecy, the band used discretion as they rehearsed.

“We couldn’t say what we were doing out loud, though I am sure that everyone heard the music,” Chaikovsky said.

The premiere ultimately had different implications for those who took part.

“As a senior, this gig was a reminder of how many opportunities, friendships and great memories band has given me at UCLA that I literally could never have gotten anywhere else,” Lee said.

As for Reilly and Villegas, the premiere marked the beginning of a new adventure together as a married couple.

“For me, its just about creating memories with your best friend,” Reilly said.

Whether band member or contestant, the premiere of the 24th All-Star season of “The Amazing Race,” marked not only a new adventure, but also a shared one.

“It’s a great honor. We get to travel the world,” Villegas said. “See all these great sights. It really is, as cliché as it is, a once in a lifetime opportunity.”