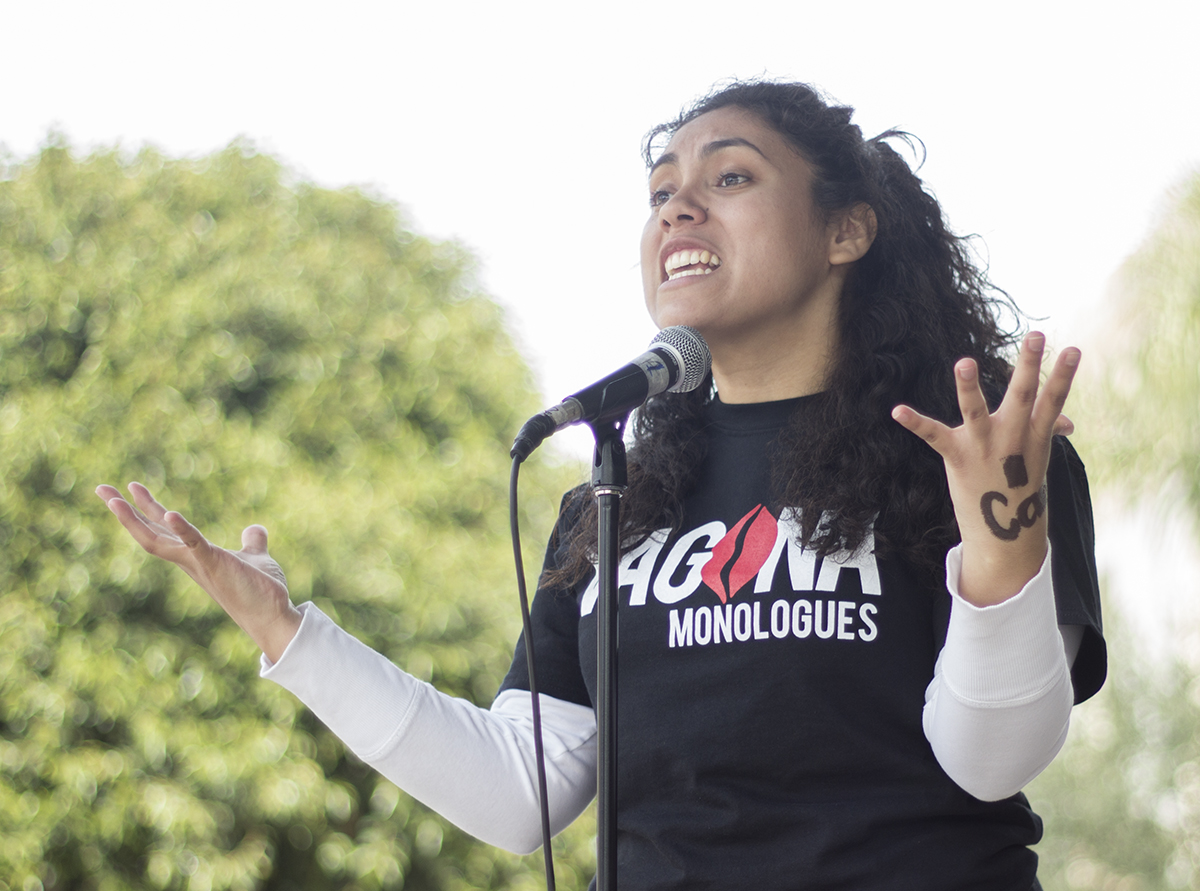 February brings love notes and roses, cupids and valentines. But there’s another “V-Day” this month that gifts gender empowerment instead of chocolates.

Throughout the month of February, UCLA students of Social Awareness Network for Activism through Art will host an ongoing V-Day campaign for gender equality with performances and panels aiming to fuse art and activism in a creative way. The campaign will conclude with student performances of the play “The Vagina Monologues,” written by Eve Ensler and featuring a series of monologues dealing with several aspects of the feminine experience.

“The entire V-Day movement is just so beautiful because it encourages women to be loud about their experiences and sexuality,” said Kausar Mohammed, executive co-producer of the campaign and fourth-year communication studies and international development studies student. “That includes the bad experiences too that tend to get tucked under the rug, like domestic and sexual abuse.”

The campaign kicked off Tuesday at V-Day: One Billion Rising Kick Off, which featured a cappella performances, dance crews and interactive art exhibits in Bruin Plaza. At the event, students gathered to take a stand against gender violence and sexual assault.

The month will continue with events such as The State of Female Justice: Los Angeles, a panel that will feature such guests as Ensler, Olivia Wilde and UCLA School of Law Professor Kimberlé Crenshaw, who will discuss sexual and domestic violence against women. On Monday, Women’s Jam at Kerckhoff Art Gallery will offer women of different ethnic and religious groups a chance to speak about their cultured experiences with sexuality.

Each event holds admission on a donation-only basis. The proceeds will be given to two beneficiaries this year. Both organizations, A Window between Worlds and Peace over Violence, advocate for survivors of domestic violence.

MJ Jackson, executive co-producer of the campaign and fourth-year communication studies student, said this year, the campaign attempts to reach out to and include the entire community, and that it’s not just meant for women supporting feminism. One of the events, Dick Dialogues, will offer a chance for men to participate in an open-mic spoken word show regarding gender issues and masculinity today. The event will be located in the Ackerman Global Conference Lounge.

“Feminism isn’t something that’s precluded only to women,” said Alec Moore, third-year art history and gender studies student and producer of the campaign’s “The Vagina Monologues.” “That’s how we came up with Dick Dialogues; masculinity is often just defined as the opposite of femininity, without its own set of principles.”

Mohammed said events like these are important for the gender equality movement as a whole, not just for topics regarding masculinity. The only way to truly tackle the issue of gender inequality is to get everyone involved in the cause.

“We want to give men a voice. In the feminist movement, many people get put aside and considered irrelevant to the cause, but really it’s necessary for everyone to be on board,” Mohammed said. “Men face just as many gender stereotypes as females do, especially in this age when the pressures of masculinity are more and more challenging.”

And the women’s voice will wrap up the campaign: “The Vagina Monologues” will run for three showings, two in De Neve Auditorium and one in Schoenberg Hall to accommodate a larger audience.

“The play talks about women in a different way. It encourages them to be loud,” Mohammed said. “With ‘The Vagina Monologues,’ the idea is that if you can’t up front say the word ‘vagina,’ then you’re hiding a woman’s sexuality. So often women are told not to be sexual beings, but the play totally defies that.”

The show consists of several monologues – some humorous and others heavier, all focusing on a woman’s experiences. A question-and-answer session with the cast will follow the performances, as well as an opening-night reception.

“Performing the show and being up-front about gender topics is the only way to create a natural discourse where we can start to change things,” Jackson said.

“(The issues V-Day brings up) seem like disparate elements but I think they’re really closely connected,” Moore said. “Both men and women are advocates or survivors standing up for this same change that we’re trying to see in the world.”