Musical trio to bring color to Fowler Out Loud 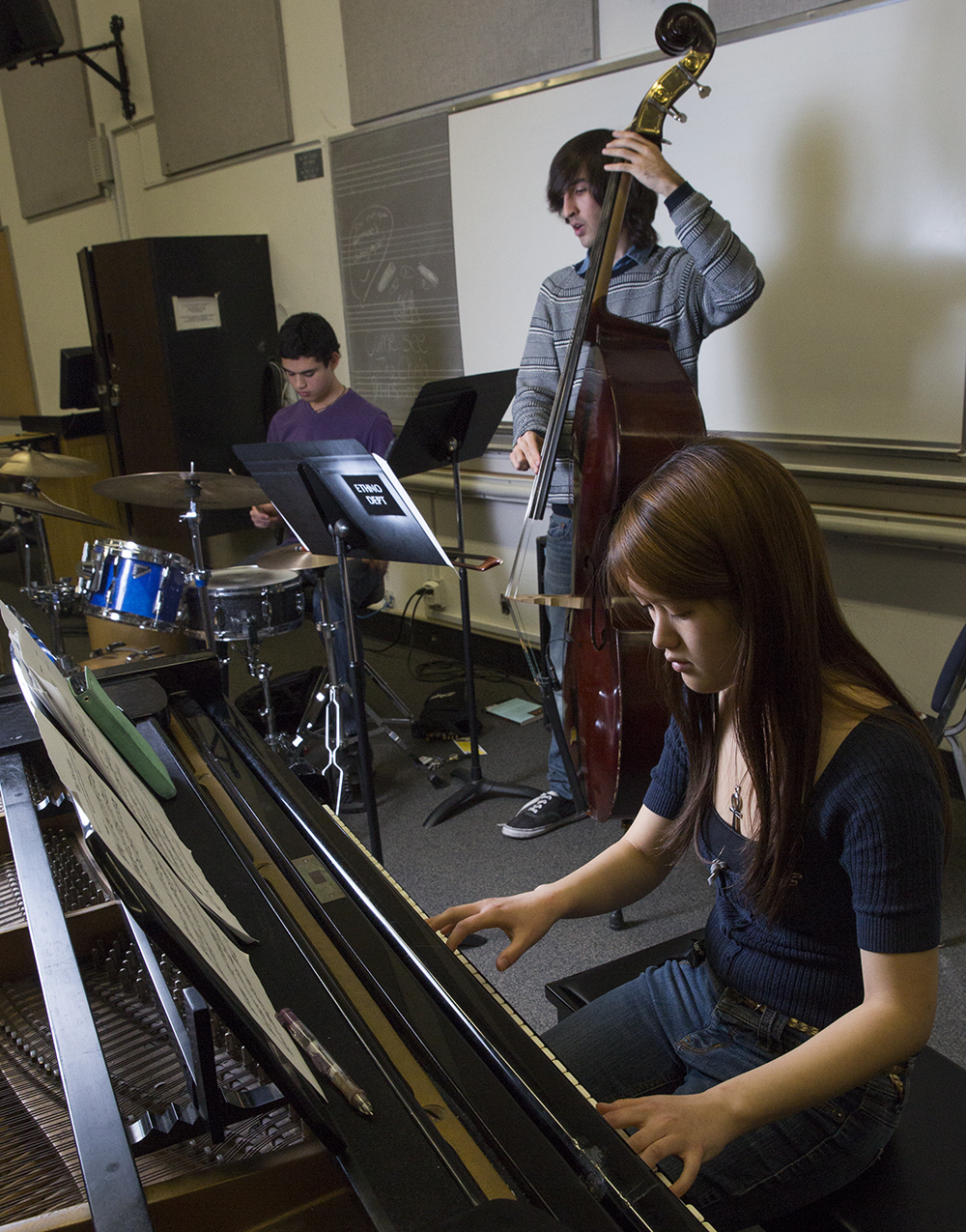 The blank canvas buzzes with white noise. The drummer and bassist build a melody of blue on their instruments. Red follows. Eventually, the musicians have created an auditory painting so rich it encompasses the audience with color.

With a musical piece featuring experimental qualities, jazz trio The Chrio will perform with three guest horn players in Thursday’s installment of the Fowler Out Loud concert series. The student musicians’ set is based on a theme of colors.

“(The concert) is like a musical journey in the way that we go from having a blank canvas to a black starry night, where everything is filled up and covered with the spectrum of colors,” said bassist and first-year jazz studies student Nashir Janmohamed.

“The song was originally about a really good friend you have and you don’t have to prove anything to each other,” Chua said. “It’s very comfortable – you can just be a blank canvas.”

Janmohamed said that the song is a conversation between Dear and Sithi-Amnuai, as the horn section’s music is dominant in this song, with support from the trio.

“They’re trying to say something with a little less structure than there is in any of the other pieces,” Janmohamed said. “That’s just entirely listening and … supporting what they decide to do.”

Chua formed the trio last quarter after the three met at a jam session within the music department. Chua wrote “Blank Canvas” two years ago, and the song has undergone changes every year since then. Janmohamed and Laudicina’s suggestions heavily influenced the version of the song that the trio will be performing on Thursday, highlighting the shift to a group writing process.

Laudicina said writing the concert’s closer “Starry Night,” which has a funk fusion solo section, was a group effort in contrast to the other songs, which were originally written by Chua.

“In the future we’ll try to get together and write music,” Janmohamed said. “It’s something I think you have to work really hard at to get comfortable as a group.”

Chua said she describes “Starry Night,” which is not based on Vincent van Gogh’s painting, as a song about mourning with a small joyful section, while Laudicina said he describes “The Truthful Blue” as “the saddest happy.” Many of Chua’s songs sound sad, which she said is unintentional. When she writes she is often feeling a strong emotion, which she expresses through her music.

However, other songs, like “Flowers Red,” were originally written as homework assignments for a composition class Chua took. The song is based on a Japanese scale and Chua describes it as a time sandwich: the beginning and the end have the same melody with different time signatures, while the bridge section sounds like a great contrast, acting like the meat between two slices of bread.

“(The song) is all about holding it together,” Janmohamed said. “It’s really pretty but it comes from how complex (the song) is and how hard we have to try to make it sound natural. It’s all about disguising the weirdness of it all.”

Although Chua said the theme of colors was unplanned, it came to her naturally. She noticed that she had a few compositions about colors despite writing at different times. After receiving an email about available days to perform in the Fowler Out Loud series and pursuing one, she decided to elaborate on the theme because she likes a cohesive concert set.

The painting analogy can also be extended to describe the guest horn players’ contributions.

“When you do art, you don’t typically work with other people and collaborate like you do with music,” Chua said. “It’s like getting different artists together. Everyone has a different brush, a different texture and a different color. You have more options – more colors and styles and ways of presenting an idea.”