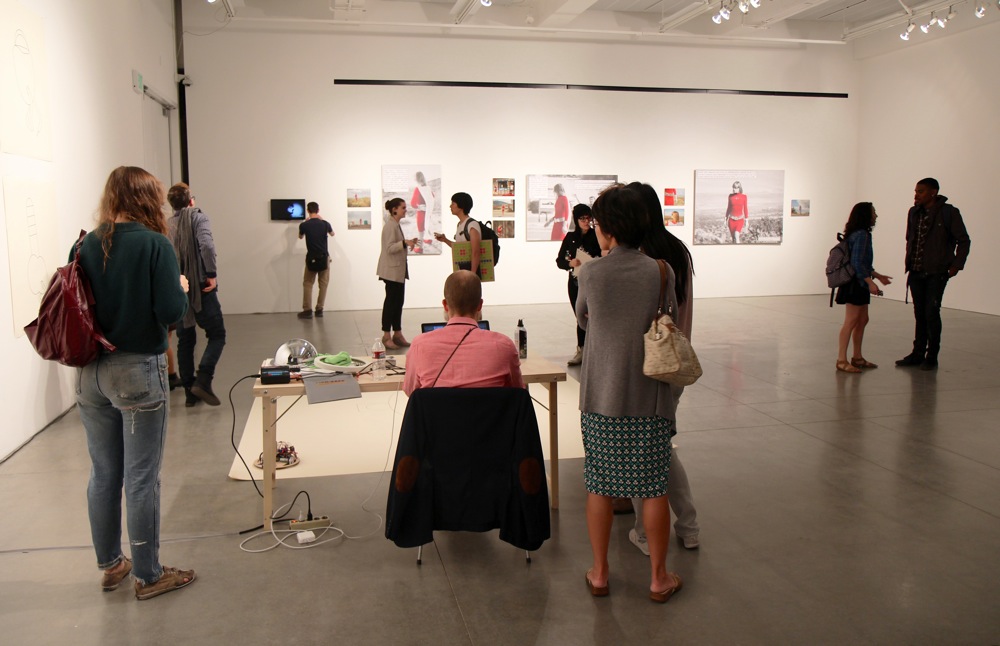 Robots, video clips and superhero characters have come together at the New Wight Gallery.

Students of the Design | Media Arts graduate program are currently presenting their work in a week-long exhibition entitled “Prefix.” The gallery includes multifaceted pieces, including displays of film, performance and computer engineering.

The exhibition provides an opportunity to portray the students’ art not only within the department, but also within the greater Los Angeles area, as the event is open to the public, giving all nine second-year students exposure for their work.

Design | Media Arts graduate student Matthias Dorfeltsaid all nine make distinctive contributions to the exhibition with their different backgrounds. Dorfelt said it was his background in computer programming that helped him create a robot capable of illustrating. His portion of the exhibition includes drawings produced by the robot, as well as the robot itself drawing in action.

“I work a lot with software, and previously I did some computer-generated work,” Dorfelt said. “Creating the robot for me was the first big step of actually getting into electronics and bringing my work to a more physical world.”

The New Wight Gallery in the Broad Art Center is the first on-campus location in which the artists have displayed their work. Dorfelt said this week marks their progression on the Design | Media Arts track within the UCLA community, incorporating a varying range of artistic talent.

“The terms ‘media’ and ‘design’ are so broad that the program is willing to accommodate a huge variety of different practices,” said Peter Rand, one of the students displaying his work. “As someone going to school, getting that opportunity to explore outside one mode of expression is invaluable.”

Rand’s work for the exhibition incorporates film clips of Space Girl, a fictional character created by Rand, with photo design to tell a story that considers ideas of space and its continual creation. He said his work shows the nature of space as a result of our own interactions, a responsibility that we don’t have a full understanding of or control over.

“Space Girl arrives on Earth with the intentions of ‘saving the planet,’” Rand said. “The character becomes frightened as she confronts the conflicting values and beliefs of our society, but the whole story is based on the fact that space continues; the tiny blue planet remains, spinning in circles.”

Rand accompanied his photographic series of the story with real recordings of public reactions to Space Girl, hoping to convey a human reaction to the unknown.

Others, such as Jaehyuck Bae,applied different technical skills for the exhibition. Bae said his technological background helped him develop his piece, “The Light Gap,” with an uncommon combination of engineering and art.

“The Light Gap” is a light box with about 100 LED lights that can display color between the two sides of the box . Bae can scan and display an image from a video, such as a sunset scene, and emulate the perception of color change when looking at a sky.

“There’s a big connection between engineering and art,” Bae said. “A lot of artists’ work requires specific engineering elements, and having that knowledge really broadens my scope.”

Without a uniform style or technique to the art within the exhibition, the students of the Design | Media Arts graduate program cohesively put forth an exhibition pulling from multiple fields of both art and technology. Dorfelt said that media arts takes a different approach to the creative process, with its open boundaries, as opposed to other fine arts with more concrete definitions, such as painting.

“In a way, media arts are decoupled from other fine arts because they have their very own history,” Dorfelt said. “The actual practice of media practice is fairly young; it doesn’t have a lot of baggage. That makes room for creativity, and that’s why we get the chance to do this in so many diverse ways.”