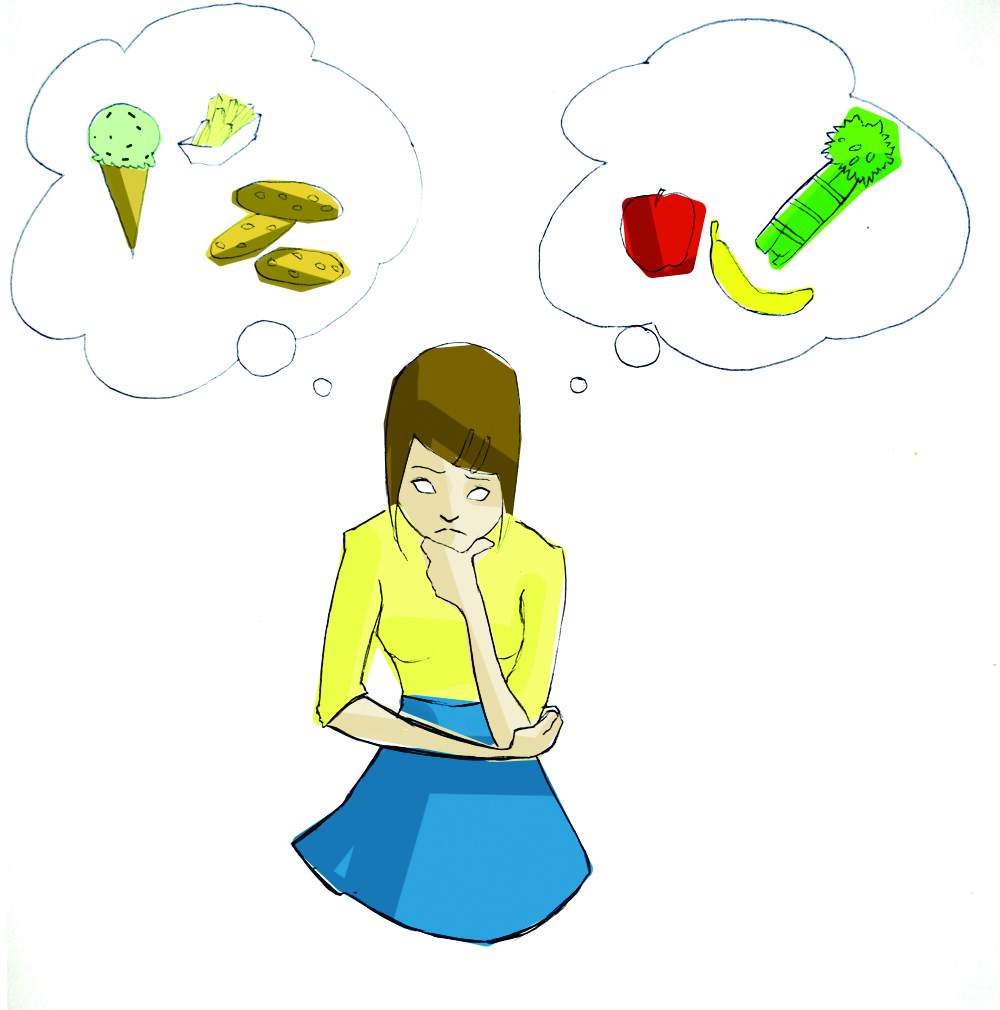 The myths and truths of college weight gain often tangle together, and make it difficult to find a balance for not only a healthy body but also a healthy mindset. Here’s the skinny on the freshman 15.

Dolores Hernandez, UCLA Dining Services nutrition education coordinator and registered dietitian, also known by students as the voice behind AskDolores, said the notion that most students gain the infamous 15 pounds is a myth.

“This whole ‘freshman 15’ term actually got started by Seventeen magazine; there isn’t much concrete evidence that students really do gain these 15 pounds,” Hernandez said. “It really just creates a lot of unnecessary anxiety around eating, especially for incoming freshmen.”

She said that this type of weight gain is likely equalized in students who don’t attend college too and that in her professional opinion, the average weight gain is a more moderate change, around 4, not 15, pounds.

“If students do gain a few pounds, it isn’t necessarily a result of going to college,” said Eve Lahijani, UCLA nutrition health educator and registered dietitian. “Kids who don’t go to college gain weight too. Some people are even growing still or putting on muscle mass; there’s a lot going on.”

That doesn’t mean that college life is always blameless in regard to weight gain. Snacking during late-night study sessions, preoccupation with academics and the gleaming dessert cases at the dining halls don’t necessarily scream health. But being mindful of these new factors may help students maintain a normal weight nonetheless.

For example, Hernandez said managing a routine for eating and making sure to eat meals around the same time every day can promote balance, as well as limiting unnecessary sugar intake such as sodas, juices and certain cereals.

The inevitable long walks down Bruin Walk to class don’t hurt either, said Elisa Terry, the program director for FITWELL, a fitness and wellness program offered by UCLA Recreation.

But with the overwhelming change in academic pace and course load, many freshmen don’t take advantage of the exercise opportunities on campus, such as Outdoor Adventures, the aquatics center and fitness classes offered on campus.

“We are physical beings; we are made to move,” Terry said. “You should do physical activity to test yourself, to learn new skills and to feel better, not just to manage calories. People who view it only as a means to compensate for what they eat usually end up having a negative relationship with exercise, and when something’s negative, you don’t really sustain it very well at all.”

Scheduling such physical activity can be another major point of change for incoming freshmen. Terry said many new students are accustomed to scheduled sports practices and jam-packed days in high school, and that the delegation of free time may be an adjustment.

Beyond exercise, many students attribute the potential for weight gain to the abundance of high-calorie food in the dining halls or quick-service restaurants on the Hill. For example, the vegan chocolate chip cookie from Bruin Café boasts nearly 600 calories in itself.

“There are these buzz words we hear a lot; many students think that if a food is ‘natural,’ ‘organic’ or ‘gluten-free’ that it’s healthier, but that isn’t always true,” Hernandez said.

But can extreme efforts to steer clear of these unhealthier foods actually contribute to weight gain? No matter the details of certain foods on the Hill, Hernandez said incorporating these foods in reasonable amounts may actually prove more beneficial than restricting them completely.

“One issue students have is that they may become overly restrictive, and because of that, they become more obsessed with food if anything,” Lahijani said. “It’s just a matter of enjoying in moderation so you don’t fall into a trap of banning foods and craving them more later.”

Instead of extreme restriction and stress over food, Hernandez said taking advantage of UCLA’s high-quality dining options would benefit students more. Besides the wide variety of cuisines such as the pan-Asian fare offered at Feast at Rieber , the new Sproul dining hall opening this school year will feature wholesome ingredients, such as seasonal produce and a wider variety of whole grains, in its recipes.

“We’re incorporating more seasonal foods, making sure that our produce is within season so that it tastes better. We’re also trying to get as much local food as possible, whether that’s produce, dairy or even meat,” Hernandez said. “Besides the ingredients, we’re also really focusing on the cooking methods, making sure everything is grilled, roasted or baked instead of battered or fried.”

According to Lahijani, focusing on quality instead of calories promotes a balanced mentality in anxious first-year students, who at times go to extremes to avoid weight gain.

Lahijani said that the same high-achieving qualities that help students get into UCLA may also cause them to become overly preoccupied with attaining a certain figure and avoiding weight gain.

“There is a happy medium that’s about remembering that you want balance and you want health, as opposed to being the skinniest or the most muscular,” Lahijani said. “Instead of going for what it looks like, it’s about going for your own personal best with how you feel.”