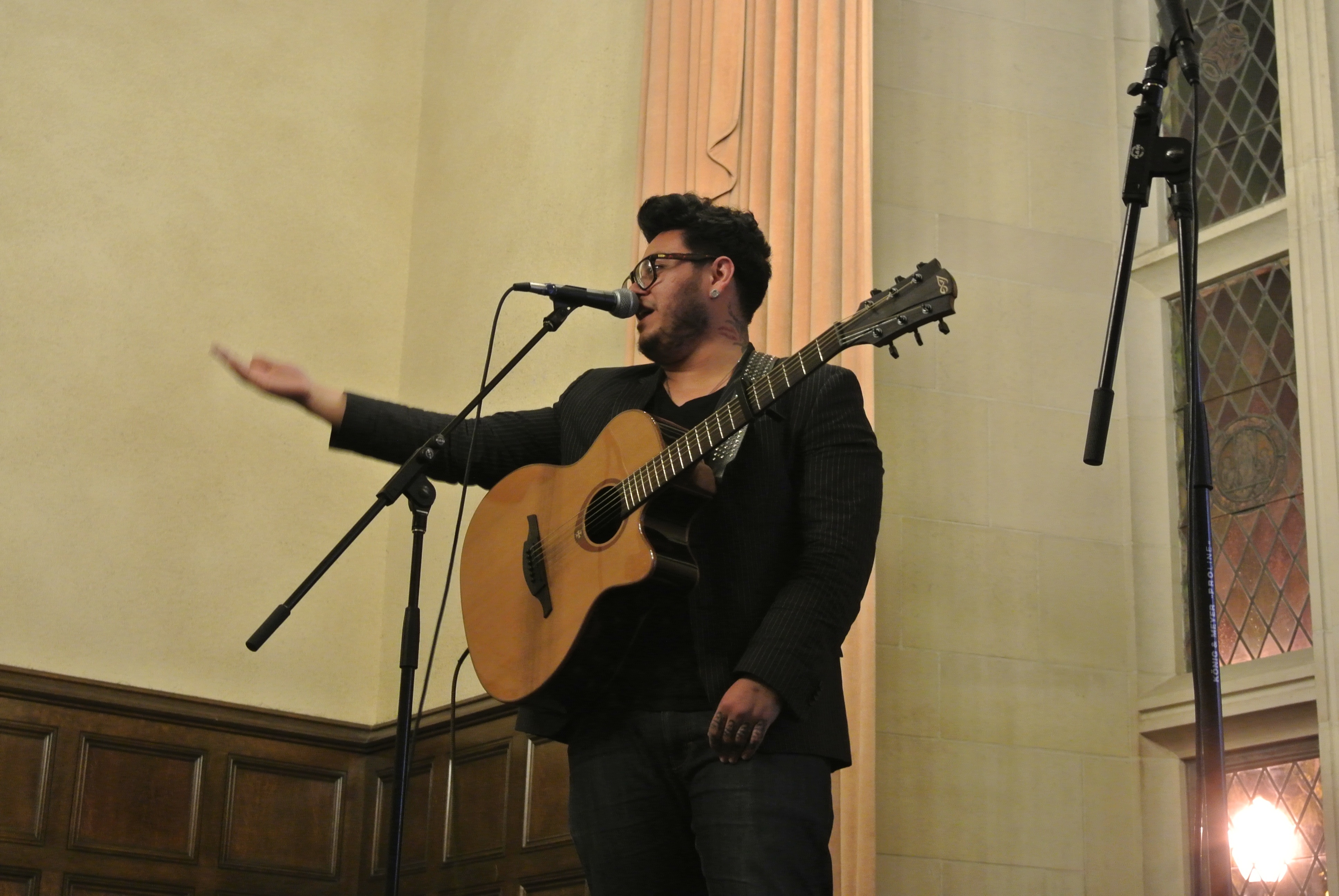 An American Idol alum, a musical duo that is married in real life and a world-renowned dancer all took the stage last night to raise money for MEMO’s first-ever Hepatitis B Awareness Night.

Held at the Kerckhoff Grand Salon, the first-ever Hepatitis B Awareness Night hosted by Medical, Educational Missions and Outreach (MEMO) featured performances by Andrew Garcia, who appeared on Season 9 of American Idol and musical duo Us, which includes real-life husband and wife Michael Alvarado and Carissa Rae. The night was filled with raffles to earn money for Hepatitis B vaccines and informative talks on preventative measures to the disease.

Us, the upbeat, quirky duo who started more than a year ago, opened the night with an original song called “Slow Love,” with Alvarado strumming his guitar and Rae shaking a tambourine.  After several requests by audiences, they delved right into their next song, “The Banana Song,” a quirky song about fruit written by Alvarado. During the last song of their set, “Missin’ You Like Crazy,” the couple exchanged constant flirtatious looks and loving smiles while singing original melodies. Alvarado’s raspy, Jason Mraz-esque tone paired with Rae’s R&B-inspired vocals paired very well, and the chemistry between Alvarado and Rae was eminent as they harmonized effortlessly throughout their acoustic set.

Alvarado said the song “Missin’ You Like Crazy” was inspired by a stage of their relationship when he and Rae began dating. True to the song’s message, the song was also written long-distance over Skype.

“I actually gave up (on music) and took a 9-to-6 job, and that was right when I met her … We did the first song together, and that’s when it clicked. When we got together, everything made sense,” Alvarado said.

Rae said their inspiration for most of their songs on their upcoming EP, self-titled “Us,” details from the stories of their changing relationship, from the early stages of dating to the small details of married life like doing laundry and forgetting to do the dishes time to time.

“A lot of our songs are about each other, missing each other. Now that we’re together, we write about everyday things, things we’ve experienced together or individually,” Rae said.

Garcia, who performed at Kerckhoff two years ago, said he enjoyed the energy of the crowd. He performed his newest single, “Dumb”, which was written about the feeling of falling in love and being clumsy.

“I like doing originals because you’re free to do whatever you want and put whatever into the recording. I’m connected to covers but I’m more connected to songs I write,” Garcia said.

Garcia’s soaring vocals captivated audiences, when he opened with an acoustic version of “Call Me Maybe.” Garcia’s extensive musical background was obvious during his opening number, as he had colorful riffs added in the song, and he creatively added new twists in the song that made it almost unrecognizable to audiences, but in a good way. Most audience members were surprised it was the hit Carly Rae Jepsen song until he started singing the famous chorus. For his last song, Garcia debated between Maroon 5’s “Sunday Morning” and Paula Abdul’s “Straight Up,” two songs that made him popular on Idol two years ago. He ended up performing both.

Joining Garcia for a cover of One Directions’ “Little Things” was Brian Puspos, a dancer part of Mos Wanted Crew, a crew that appeared on Season 7 of “America’s Best Dance Crew.” Usually a dancer by day, Puspos serenaded the crowds of squealing girls with the One Direction cover. With Puspos sitting on a chair while Garcia strummed a guitar, Puspos harmonized during the chorus with the Idol alum, revealing that not every singer has to stick to just “da.” Even Puspos was shocked at Garcia’s effortless singing talent during their set, and spontaneously complimented him throughout the One Direction cover, repeatedly saying, “Why are you so good?”

The night ended with all the performers returning to stage and singing an original song about UCLA. “Why would we go, there’s no place like UCLA,” they sang, lyrics that riled up a crowd full of Bruins. Alvarado revealed that the song was written in the span of five minutes while the performers were backstage. The personable song was a great addition to a set of acoustic songs and left audiences feeling even more connected to the down-to-earth performers.

Immediately after that, Garcia decided on a spontaneous filming of a Harlem Shake video for the YouTube stars. Garcia’s brother held a video camera in front of Kerckhoff Grand Salon, and all students in attendance stood atop chairs, waved their hands in the air and did their favorite dance move while the stars did the same on-stage. Once again, the performers thanked the cheering crowds and stayed for pictures after the show.