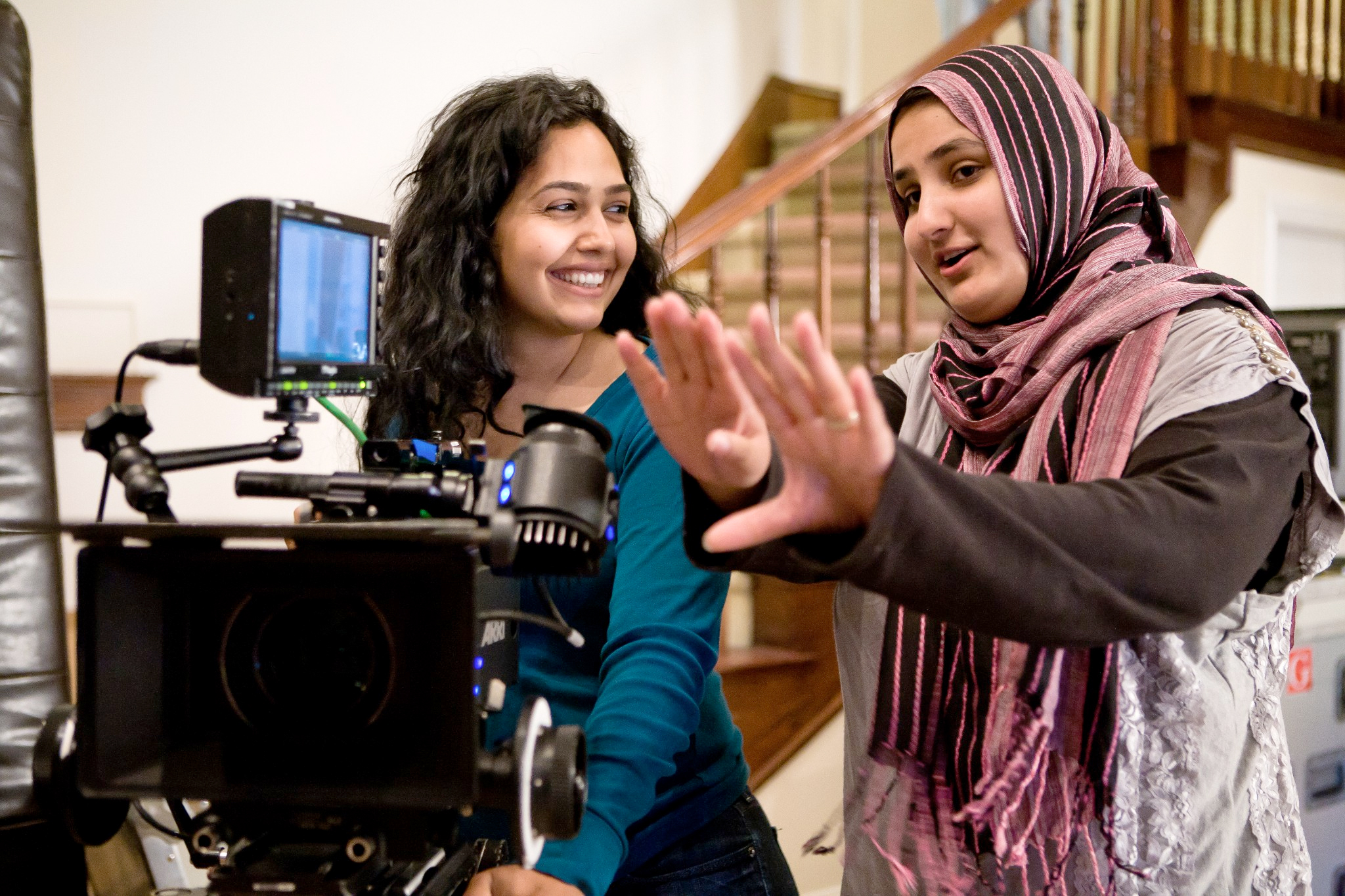 Alumna Lena Khan (right) is currently fundraising for her film “The Tiger Hunter,” which follows a Muslim Indian immigrant dealing with culture shock after moving to Chicago in the 1970s.

All the actors and crew were ready to shoot, but there was a problem: The cameraman was a no-show. Unable to track him down and assuming a catastrophic disaster had occurred, Lena Khan laughed it off with her cinematographer and instead managed to shoot her music video in half the time allotted.

Khan, an alumna of the UCLA School of Theater, Film and Television, said she keeps her focus on the story even when obstacles get in the way. Most recently, Khan has started to campaign for funds for her original film “The Tiger Hunter.” The film follows a Muslim Indian immigrant as he faces severe culture shock when he moves to 1970s Chicago.

Her dramatic comedy originated from stories her father, also a Muslim Indian immigrant in the ‘70s, used to tell her. Khan added to her father’s stories with interviews from various characters – hippies, conservatives and immigrants alike.

Khan’s identity as a filmmaker began to develop during her days as an undergraduate political science and history student at UCLA. She was working through a number of student organizations to educate students and raise aid money for the relief efforts in Darfur. While the students tried to set up lectures and other informational events, attendance rates weren’t high. It wasn’t until actor Don Cheadle visited campus that the message got through.

“Even though it really had nothing to do with Darfur, people paid attention. That’s when I figured out that film is the vehicle for social change,” Khan said.

While social activism isn’t always the core topic in her work, Khan said she often tries to highlight social groups, such as Indians, Arabs and military veterans, who are often overlooked or misrepresented. In 2007, she won the One Nation Film Contest, a competition designed to shed light on Muslims in film. Her video “A Land Called Paradise,” in which she asked 2,000 Muslim Americans what they wanted people to know about them, took the grand prize.

Set to Kareem Salama’s country song “A Land Called Paradise,” Khan’s short musical documentary features Muslims who are African, Latina and Middle Eastern sharing small confessions that show how they are ordinary people, despite some negative media portrayals. Khan’s short “Bassem is Trying,” which satirizes the pursuit of Muslim acceptance in America, was also recognized in the under-60 seconds category.

M. Hasna Maznavi, who works with Khan on media and promotion for her campaign through the Kickstarter platform, said she appreciates the value of social change pieces like Khan’s “A Land Called Paradise” and “The Tiger Hunter.”

“I think a lot of filmmakers, especially in my generation, saw the impact of the media on (the Muslim) community, and when we went to college we set out to reframe our voice because it felt like we didn’t have a voice,” Maznavi said. “Lena is definitely a person that takes a stand in representing an unrepresented voice.”

Nausheen Dadabhoy, a cinematographer and personal friend of Khan’s, spoke to Khan’s collaborative nature and ability to adapt in a pinch. Dadabhoy said Khan once learned how to juggle knives before asking an actor to try it. Dadabhoy explained that with Khan, it’s all about taking her work a step further.

“Every time, we wanted to push ourselves and do something different,” Dadabhoy said. “I know everyone talks about director’s voice, but her voice was always changing. That was her way of testing out new things and push(ing) boundaries on her own. She was always trying to learn with each project.”

Khan’s pursuits in fundraising for her film led her to Kickstarter. While she attained most of the film’s budget through private investors, the last $55,000 depends on the success of the campaign.

Unlike other fundraising sites, Kickstarter imposes a deadline for raising funds. Like most projects, “The Tiger Hunter” was given 30 days to reach the goal. With Kickstarter, however, if the target isn’t reached by the deadline, none of the funds are given to the project as a way of protecting investors.

Khan said that even if the Kickstarter campaign ends up not being successful, she intends to continue raising money through more private investments.

She said her drive to pursue her filmmaking goals despite the hardships was a lesson she learned at UCLA.

“I remember in film school, a guest speaker came to talk about filmmaking. He said, ‘Don’t get into this business if you don’t like to fail. If after 20 years of failing, you still like it, then keep going,’” Khan said.