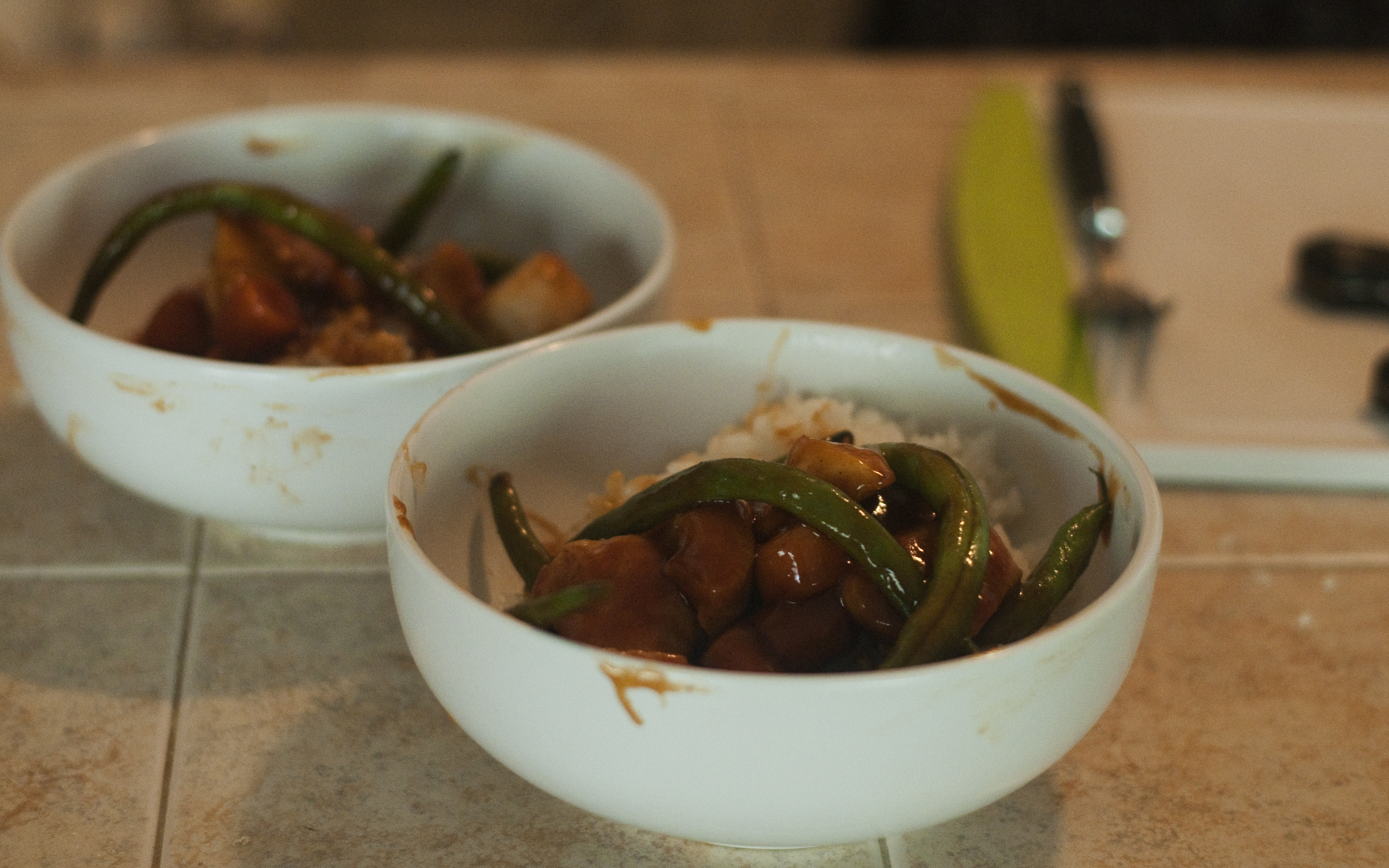 Vegetable stir-fry with chicken and rice prepared by Bernosky at her Gayley Ave. apartment.

Get cooking: Give two of third-year psychobioogy student Amy Giroux’s recipes a try:

In UCLA’s dining halls, the farthest stretch of culinary creativity for most students is a microwaved bowl of Rice Krispies cereal and mini marshmallows.

But self-made dorm food quirks can’t really prepare students for the efforts required of apartment cooking, and the transition proves to be tough for many. After all the conveniences of dorm food, some students are left resorting to microwavable dinners and mac “˜n’ cheese almost every night.

However, other students find ways to ditch the microwave and add better quality to their cooking, garnering greater kitchen success.

Third-year psychobiology student Amy Giroux is one of many students who recognizes the difficulties of apartment cooking and works to find creative culinary options.

“It starts becoming a difficult balance for students because carb-loaded foods tend to be cheaper than fresh ingredients, and a lot of college students end up opting for that,” Giroux said. “I know some people eat Top Ramen almost everyday because it’s fast and cheap, and I’m like “˜Oh no!’ I couldn’t do that.”

Cooking at home in high school has helped Giroux prepare for the obstacles of apartment cooking, such as high costs of grocery lists and small time frames. She also tracks her culinary feats on a public blog.

Hannah Bernosky, a third-year history student, also started a food blog to keep track of her creations but under different circumstances. After moving into her first apartment this summer with no prior cooking experience, Bernosky began trying her hand in the kitchen and sharing her learning experiences with other beginners.

Her blog features quick recipes, such as her meatball sauce comprised of chili sauce and grape jelly meatball sauce, a combination which Bernosky said actually tastes good despite the unlikely mixture of ingredients.

Online resources, such as Pinterest and a chart called “Veggie Cooking Cheat Sheet” on kidspot.com that lists different ways to cook vegetables and how long it will take, have helped Bernosky master the cooking ropes this summer. After much trial and error, Bernosky suggests students use green beans for their versatility in almost any meal.

Bernosky views her kitchen with a simple strategy: “If you can boil water, you can cook,” she said.

Although she is not a beginner in the kitchen, fourth-year history and Middle Eastern studies student Pam Roehl said this type of beginner’s confidence is what most college students lack in the kitchen to help them make the successful transition.

“Beginners are intimidated by cooking, but it’s not rocket science. Trust me, I’m a history major,” Roehl said. “You can just look up a basic recipe online, and if you follow it, chances are you’ll make it the way you’re supposed to.”

And once the confidence to take charge in the kitchen comes, the key to finding time to cook as a college student relies on easy and simple options. Giroux relies on healthy, fast options and said she is a big fan of frozen fish because of the many different ways to season the filets, any of which take no longer than 10 or 15 minutes to bake.

She also recommends breakfast for dinner, such as vegetable omelets rich in protein.

Although the physical aspect of staying fit is important, Bernosky said she believes strategies in the kitchen are just as key, and that slightly tailoring meals to make them healthier can be easy.

For Roehl, innovation and fresh vegetables work to turn even her pasta into a healthier and more wholesome meal. She often picks out fresh seasonal vegetables at local farmers’ markets.

“Pasta is a big thing for college students, and I love making pasta. But instead of using marinara, I’d rather throw in vegetables, different herbs or wine,” Roehl said. “Trader Joe’s premade vodka marinara sauce is one of my go-tos.”

On top of the benefits of healthy eating, like sneaking spinach and kale into her smoothies, Giroux said cooking at school serves not only as relaxation for herself but also as a rejuvenating time to be with friends.

“I love food, I love different flavors and trying everything, but it’s also so much about the people that you eat it with too,” Giroux said. “There’s something to be said for quick food, but there’s much more to be said for a good meal and just unwinding with friends.”

That same sense of sharing food goes far beyond the kitchen for Roehl, somewhere that makes cooking as a busy college student worth it past her own plate.

“Cooking is a great way to serve people and show love toward them. It blesses people when they’re not having to worry about what they’re going to have for dinner or for lunch because you took care of it,” Roehl said. “If it comes more easily to me than to others, then yeah, I’d love to cook dinner.”

For these students there comes a joy in the kitchen when confidence overtakes the microwave, and sparking the stove top ignites a higher standard of food for college students, one that promotes wholesome meals and quality flavor.

A smooth transition to apartment cooking is simpler than expected; no tears necessary when students leave the days of plastic trays and cereal dispensers.