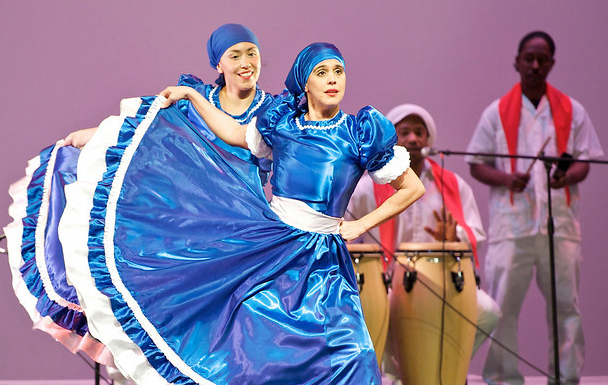 Performers in Omo AchÃ© celebrate the African culture that has been preserved in Cuba by performing both the music and dances of African groups such as the Yoruba, ArarÃ¡ and Congo, as well as Franco-Haitian music.

When Angelica Cardona decided to take an Afro-Cuban dance class during her senior year at UCLA in 2002, she never thought that it would end up shaping the course of her life for nearly the next decade.

“I was a history major and just wanted to take classes that I would never take, so I decided to go to the world arts and cultures department,” Cardona said.

This decision led Cardona to a class taught by Afro-Cuban dance master Juan Carlos Blanco, director of the Omo AchÃ© music and dance company that will be performing at the Fowler Museum this evening.

Omo AchÃ©, a company based in San Diego, will celebrate the African culture that has been preserved in Cuba by performing both the music and dances of African groups such as the Yoruba, ArarÃ¡ and Congo, as well as Franco-Haitian music.

“We are showing people the cultures that arrived in Cuba and the groups that even today maintain their cultures, dances, rhythms, music and religion,” Blanco said in an interview originally conducted in Spanish. “We want people to take away a general knowledge of all of that.”

Tonight’s performance will consist of five segments, each of which will be a representation of a different African culture.

According to Blanco, the show will consist completely of percussion instruments and song, and each dance will have traditional dress to go along with it.

The group’s name is also derived from the Yoruba language in which “Omo” means “children” and “AchÃ©” refers to positive spiritual energy that brings good luck and fortune.

The preservation of African cultures in Cuba was largely precipitated by the cultural and religious societies known as “cabildos,” derived from the Spanish word for guild or fraternity, according to Blanco.

“”˜Cabildos’ were created in Cuba during the time of slavery by the Africans who escaped and established their own communities. They wanted to ensure that their religions, songs, languages and traditions would not be lost,” Blanco said.

As a result, the members of Omo AchÃ© are all expected to sing and dance as a part of each performance in order to preserve the integrity of the African cultures they are representing, according to Blanco’s wife, Roxanne Rojas de Blanco.

“(Blanco) is a folklorist, so for him every movement and detail is important. If you did not step right or move just so, he pays attention to that,” Cardona said.

“(Blanco) is very “˜exigente’ (demanding), very particular about us knowing what we are doing,” she said. “If we are doing something that is not clear in what it transmits, he will say “˜Stop. What are we doing here? Why are you doing this? Where are you supposed to be? Are you happy or are you sad? Tell me the story.'”

According to Cardona, these cultural stories are told by means of interlocking songs and dances.

Cardona also said that Omo AchÃ©’s performance will be an opportunity for people to learn about and experience the intensity and energy of the African cultures preserved in Cuba.

“Nothing will hit you harder than a show that plays live music and really deals with energy,” Cardona said. “This is a history lesson in living color.”

The interview with Juan Carlos Blanco was originally conducted in Spanish and later translated by Andrea Seikaly.