UCLA students, with Bruin Lobby Corps, lobby for DREAM Act at the Capitol in Sacramento 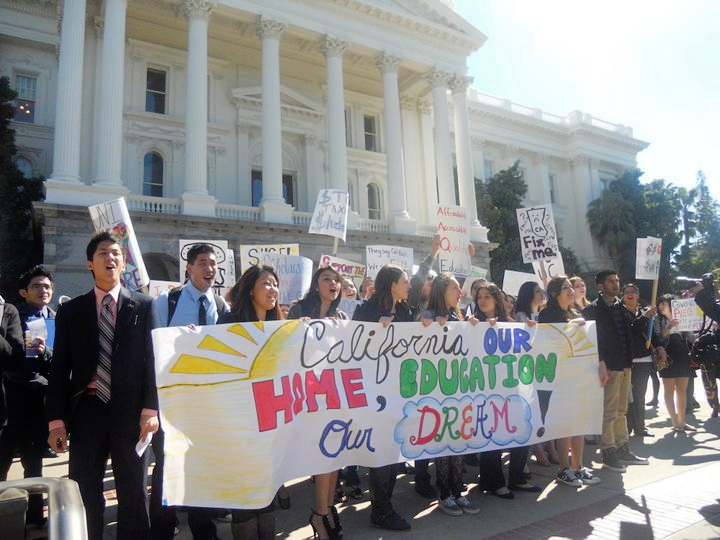 A delegation of students with UCLA’s Bruin Lobby Corps gathers at the Capitol while attending the Student Lobby Conference in Sacramento in February.

Kelli Fallon is no stranger to lobbying California state legislators and fighting for student issues in higher education.

For the past three years, Fallon has worked as a student lobbyist, participating in weekly visits with UCLA’s Bruin Lobby Corps and teaming up with other universities at national conferences.

In February, Fallon and 61 other UCLA students attended the Student Lobby Conference in Sacramento, where they met delegations from many other University of California campuses.

At this conference, UC students lobbied for the passage of the California DREAM Act and the placement of the tax extensions measure on the June ballot, said Cristopher Santos, external vice president for UCLA’s Undergraduate Students Association Council.

The tax extension measure, which helps to address the shortfall in the governor’s proposed budget for 2011-2012, would extend the temporary taxes enacted in 2009-2010 for five more years. However, if the extensions are not passed, the cuts to higher education would surpass the proposed $1.4 billion reduction.

Santos and his staff began planning in November. Eighty-plus applications later, a delegation of students, comprised mainly of first-timers, was ready to lobby at the Capitol in February.

“I was definitely nervous,” said Lana El-Farra, first-year political science student and newcomer to student lobbying. “I knew about the budget and the California DREAM Act, but I didn’t understand much of the details or why it was so important to advocate for it. I was scared I wouldn’t be able to portray it the right way.”

For Holly Craig-Wehrle, fourth-year history student and first-time lobbyist, the DREAM Act is a matter “near and dear” to her heart.

“I have a lot of undocumented friends,” Craig-Wehrle said. “And I want to see them continue their education, because they deserve it just as much as anyone.”

UCLA lobbyists arrived in Sacramento the weekend of Feb. 25 and spent the first two days learning about the issues and getting training on lobbying tactics, Santos said.

The day of the actual lobby visit, students waved signs and burst into chants, rallying around the Capitol.

“Overall, this is the best part of the trip,” El-Farra said. “When you’re out there, the numbers make a difference. It’s not just you advocating for it, it’s all the UCs.”

When students met in groups with the state representatives, a facilitator led the meeting while others presented facts and gave testimonials. In one group, an undocumented student explained what the passage of the DREAM Act would signify, said Vanessa Gonzalez, third-year anthropology student and first-time lobbyist.

Fallon said testimonials are possibly the strongest part of the lobby visit because they provide faces to the issues.

“Every single day there are highly paid and highly experienced professionals lobbying on everything you can imagine,” Santos said.

“And the one thing that sets us apart from them is our stories.”
At the end of the session, the facilitator asked if the legislator would support the issue. If the response was “yes,” the group asked for help in getting support. If the response was “no,” or inconclusive, students discussed different tactics, Fallon said.

“Usually, those who strictly say “˜no’ have to follow what their constituents want,” Fallon said.

Although several legislators were supportive of the issues, there were also some who were clearly opposed, Santos said.

The next steps will be to get the tax extensions onto the ballot and then pass them, Santos said. To gain more legislative support, students will be writing letters, making phone calls and setting up meetings, Fallon said.

For some of these first-time lobbyists, the experience left them eager to bring what they learned back to the community.