Entering the next dimension? 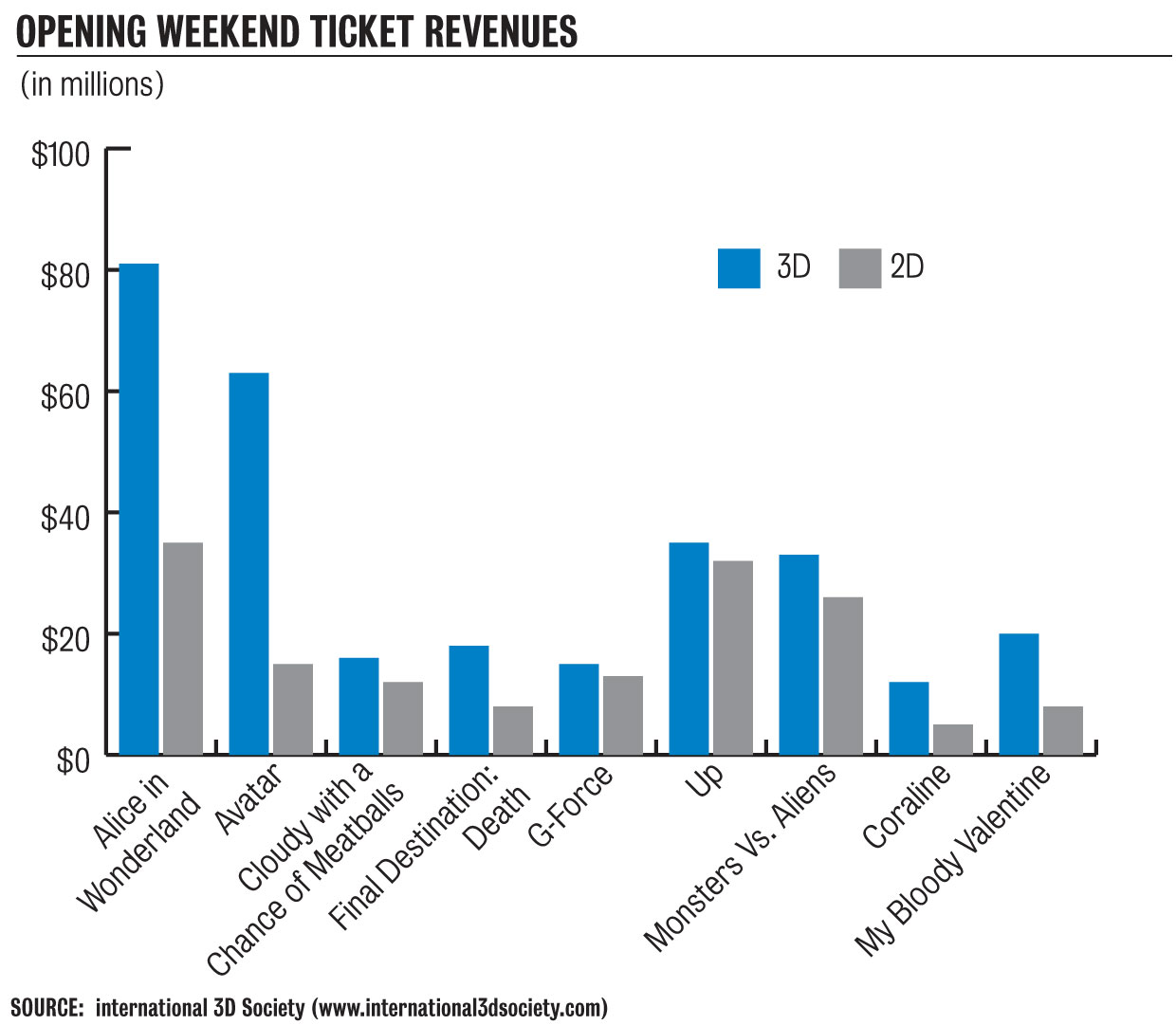 As audiences stared in awe as Jake Sully and the Na’vi flew over the lush jungles of the planet Pandora, visually it was the rebirth of an old cinema staple with cutting-edge advancement in technology.

In the past few years, 3-D films have progressed and made their way from specialized theaters and amusement park rides to widespread acclaim.

James Cameron’s “Avatar” became the most successful movie in history, owing some of its success to the spectacle of the film’s presentation in IMAX and 3-D formats.

Three-D films initially grew popular in the ’50s as a means of drawing audiences with new visual technology, the now-familiar red and blue glasses. This era quickly ended because of large production costs for theaters and audience backlash from poorly aligned projectors, which could cause headaches and other discomforts.

With the new advances in technology and efficient screening options, 3-D release is commonplace. Films such as Louis Leterrier’s “Clash of the Titans” have even had their release dates pushed back in order to transfer the movie to 3-D.

Hollywood studios have been quick to capitalize on this success, and a larger number of directors are making the shift to 3-D presentations. The rapid 3-D conversion has come under fire from many critics who insist that the focus on 3-D visuals comes at the expense of quality storytelling.

Spencer Davis, a second-year aspiring film student, believes that 3-D is here to stay, but that the trend needs to move in a different direction to stay relevant.

“To be successful, audiences need to become a part of the story. The 3-D needs to put the audience in a whole new world,” Davis said.

While the visuals of these new films may be awe-inspiring, they come with the premium ticket price, usually around a $3 surcharge.

“When I have a choice, I’m not spending the money for 3-D unless it’s something visually groundbreaking, like ‘Avatar,’” said Dylan Husmann, a third-year psychobiology student.

Although many share Husmann’s opinion, the box office statistics from this summer seem to show increasing success for the 3-D medium. Films offered in 3-D have seen great success in the summer box office; “Toy Story 3”‘s opening weekend gross saw 60 percent of its revenue from 3-D ticket sales, according to BoxOfficeMojo.com.

In the economic downturn that the country finds itself in, 3-D appears to be a viable option for Hollywood studios to try to alleviate slumping ticket sales by offering something different. A studio benefits by having a huge-earning film such as “Toy Story 3” in the format to gain the additional money made in ticket sales.

Three-D presents the costly issue of purchasing specialized projectors and new equipment, yet theaters are quickly jumping at the opportunity to embrace the new medium.

Rita Gattegno, a manager at the Landmark Theater Los Angeles, said, “3-D sales are great. All the shows are sold out and the sales stay very steady for about two months.”

Three-D films also often have more longevity in the theater because filmgoers may be tempted to see the film in both 3-D and 2-D formats, looking to gain a different experience than they may have missed the first time around.

Yet 3-D has not taken a full hold on the market, as Christopher Nolan’s “Inception,” a visually stunning film that is not offered in 3-D, has led the box office for two consecutive weekends.

Three-D’s status still remains in question, then, whether it represents a gimmick perpetuated by Hollywood executives or the actual future of cinema.