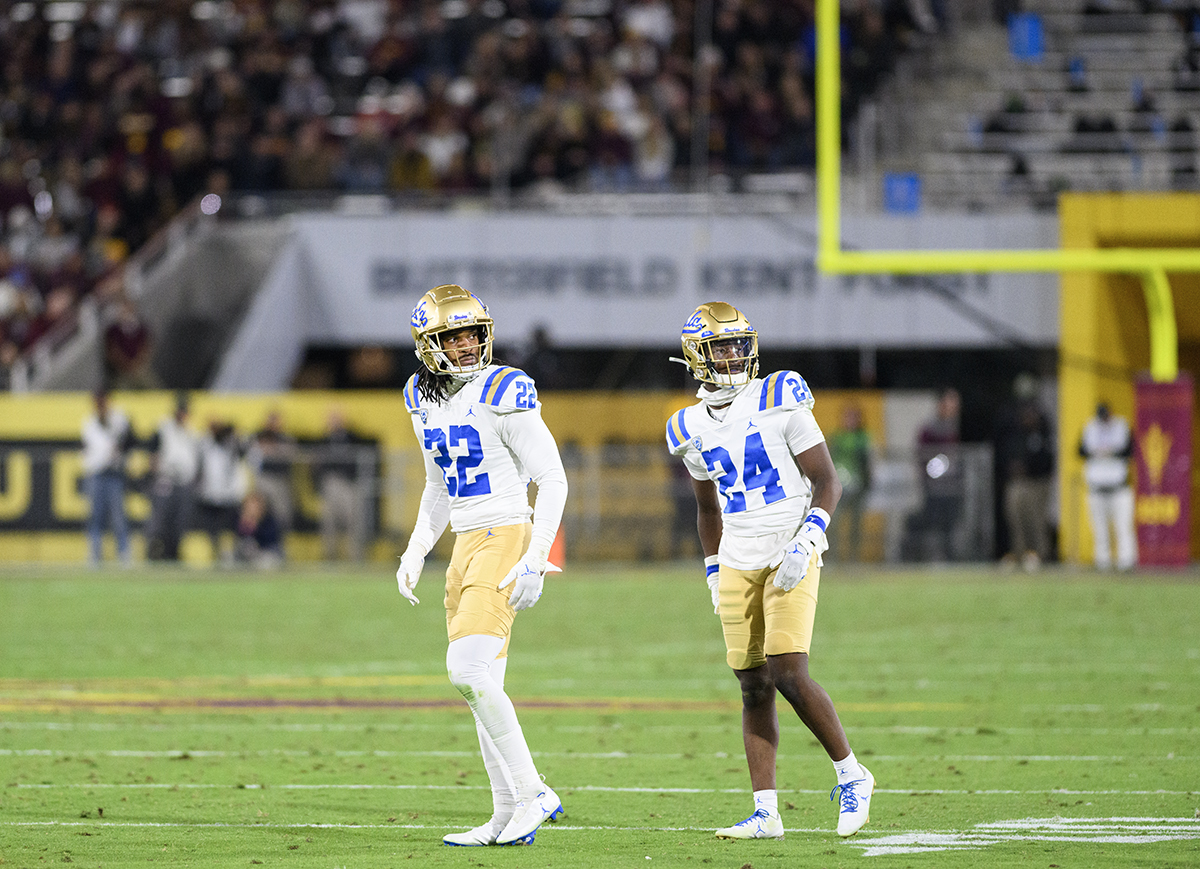 Redshirt senior defensive back Azizi Hearn (left) and redshirt freshman defensive back Jaylin Davies (right) look to the sidelines. No. 12 UCLA football’s pass defense will be tested when it takes on Arizona on Saturday. (Esther Ma/Daily Bruin staff)

The Bruins and Wildcats will each bring their high-powered offenses to the Rose Bowl on Saturday night, but the similarities between the two squads end there.

Fresh off a 50-point showing without senior running back Zach Charbonnet, No. 12 UCLA football (8-1, 5-1 Pac-12) and its potent rushing attack will look to outpace Arizona’s (3-6, 1-5) pass-heavy offense in what figures to be a Pac-12 After Dark shootout.

The Bruins come into the matchup with the country’s eighth-best scoring offense and a nation-leading 6.3 yards per carry, while the Wildcats boast a top-10 passing attack behind quarterback Jayden de Laura.

“He’s a gunslinger – he’s got a lot of toughness to him,” Kelly said. “He’s got to run around, he’s got to keep plays alive. He’s not afraid of throwing the ball up there, and they’ve got some receivers that will go get it.”

The Hawaii native’s pass-catchers include three receivers that rank in the top nine in the conference in receiving.

Wide receiver Jacob Cowing leads the conference in receptions with 65, ties for first in touchdowns with seven and ranks second in yards. After picking up an injury in the Wildcats’ most recent loss, the 5-foot-11 junior pass-catcher will be a game-time decision Saturday against the Bruins.

Tasked with stopping Arizona’s trio of receiving threats is a blue and gold pass defense that gives up 248 passing yards per game. With sophomore defensive back Devin Kirkwood out with an injury for nearly the entire game against Arizona State last week, UCLA gave up 349 passing yards and 26 second-half points.

Redshirt freshman defensive back Jaylin Davies – who stepped in for Kirkwood to make a game-sealing interception in the end zone last week – said the Bruins’ defensive back group will prepare the same way as always despite the Wildcats’ strong arsenal of weapons.

“(They) all look like playmakers,” Davies said. “We’ll just do the same thing we always do. Prepare, prevent the explosives, come up on tackles, everybody running to the ball.”

While Arizona’s passing attack figures to have the upper hand against UCLA’s passing defense, the Bruins’ top rushing attack will likely have the edge against the Wildcats’ porous run defense, which ranks 126th in the nation.

Redshirt junior running back Keegan Jones rushed for 98 yards on 12 carries, and redshirt junior quarterback-turned-wide receiver Colson Yankoff had 48 yards on the ground and the game-clinching rushing touchdown.

Kelly’s creativity in the run-game also includes converting former offensive lineman and redshirt senior Sam Marrazzo to tight end and changing his jersey number to 88, allowing him to appear in unique formations.

Marrazzo said the idea to switch positions and numbers was brought to him during the bye week by Kelly and other coaches.

“I got a lot of good reps at it during the bye week when we had some time to install it – install me in different formations,” Marrazzo said. “Coach Drev (offensive line coach Tim Drevno) asked me if I wanted to do it. I was like, ‘Of course.’”

The Bruins remained put at No. 12 in Tuesday’s College Football Playoff rankings despite the convincing win in Tempe. They remain four spots behind the Trojans, who they’re set to face next week.

Amid conversations and debates about UCLA’s ranking, Kelly said his program will focus on its ranking when it matters.

“Where it matters is four weeks from now,” Kelly said. “A lot of football to be played between now and then, so I don’t think you can get caught up in it. We want to be in the conversation, but the only way you can stay in the conversation is you can continue to prepare well and play well on Saturdays.” 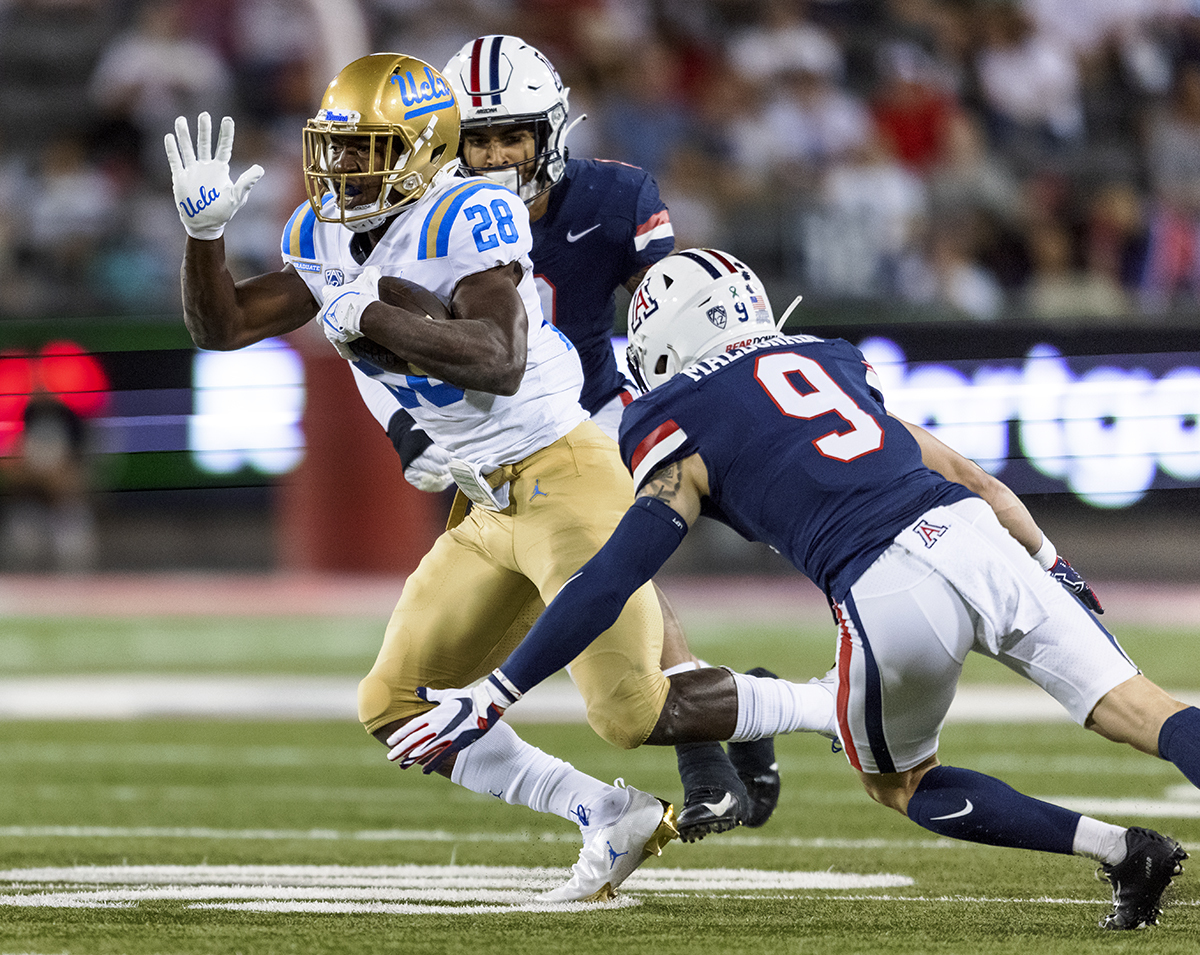 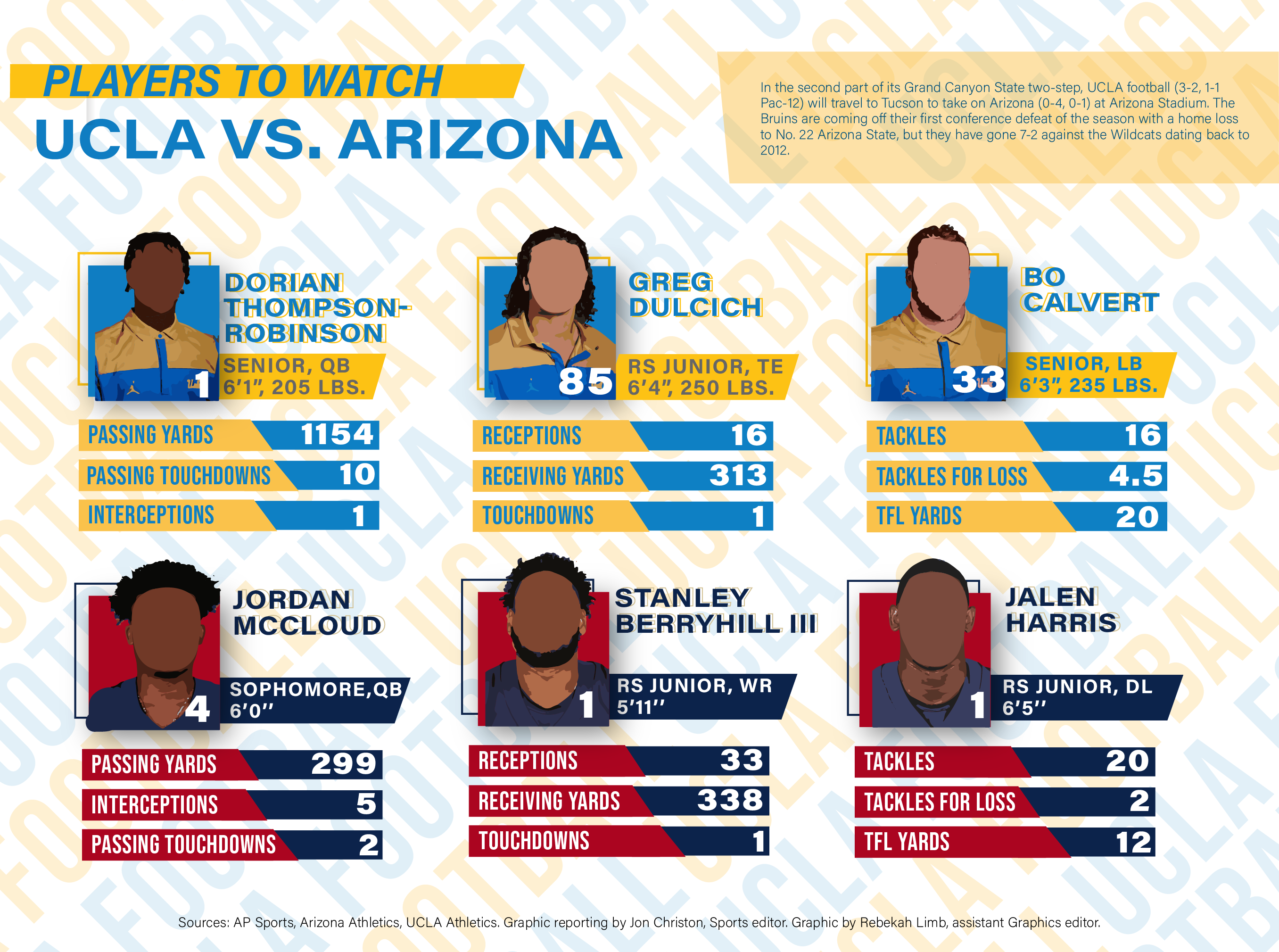