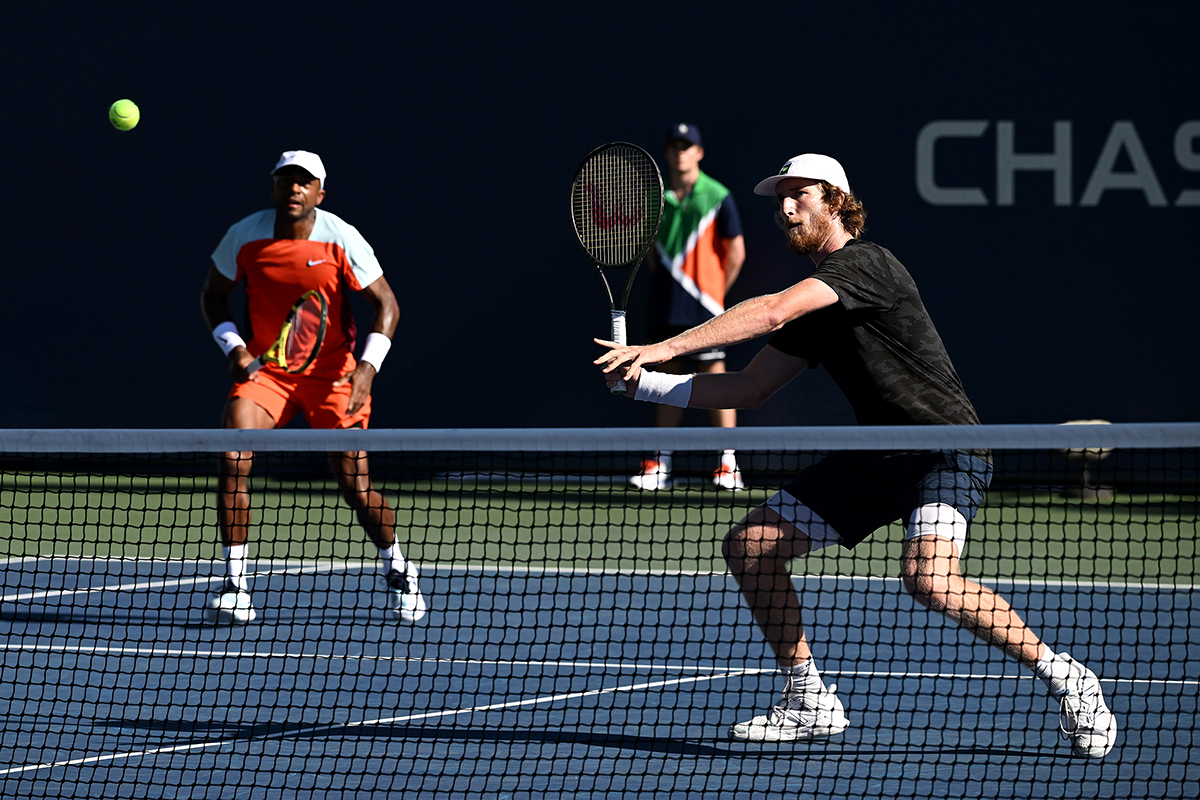 Nicholas Monroe (left) and Keegan Smith (right) are pictured during a men’s doubles match at the 2022 US Open on Sept. 1. (Courtesy of Rhea Nall/USTA)

The fourth major of the year ended the same way for former Bruins as it did in the first and third: titleless.

Eight alumni of UCLA men’s and women’s tennis were in action at the 2022 U.S. Open from Aug. 23 to Sunday. And although the group as a whole notched two more wins than former Bruins did at Wimbledon, its cumulative record across all draws was again sub-.500.

The hometown slam punctuated a breakthrough year for world No. 34 Maxime Cressy, No. 60 Marcos Giron and No. 86 Mackenzie McDonald. Each of the former Bruins achieved career highs in the rankings – becoming the only trio in the top 100 of the ATP men’s singles rankings all hailing from the same alma mater.

But despite their successful year, not one of them advanced past first-round play.

No. 30 seed Cressy retired because of an injury in his opening match against Marton Fucsovics, falling 6-7(4), 7-5, 5-1 after serving for a two-set lead at 5-4 in the second frame. The only seeded former Bruin in the men’s singles slate, Cressy claimed his maiden ATP title at the Hall of Fame Open earlier in the summer and bagged 23 of his 30 career wins on this season’s tour.

Though he wasn’t hindered by injury, McDonald’s fate was the same as his former teammate’s. Portugal’s João Sousa handed a 1-6, 7-6(4), 7-6(4), 6-3 defeat to McDonald – but not without a tweener forehand winner from the former Bruin.


Giron was pitted against No. 22 seed Frances Tiafoe – an eventual semifinalist who went on to hand world No. 3 Rafael Nadal his first loss at a slam this year. Tiafoe claimed the first-round matchup in straight sets, 7-6(0), 6-4, 6-3, as Giron wound up becoming the first victim of the fellow American’s 8-0 run in tiebreakers in the tournament.

Catherine Harrison – the blue and gold’s only women’s singles representative – mirrored Giron and ran into an opponent who would prove to be one of the top players of the tournament. No. 6 seed Aryna Sabalenka of Belarus upended Harrison 6-1, 6-3 en route to her semifinal finish.

The men’s doubles format wound up most fruitful for UCLA tennis alumni. Five former Bruins combined for a 5-4 showing that accounted for half of all wins notched at the tournament by alumni.

And a new kid on the block was one of them.

Keegan Smith, having just completed his senior season with the Bruins in 2021, teamed up with fellow American Nicholas Monroe to make his Grand Slam debut. Smith accumulated a 108-27 record across all of dual-match play in his collegiate career, including a 17-0 doubles run to claim the NCAA doubles title with Cressy in 2019.

The tandem of Smith and Monroe bowed out in the second round 7-6(4), 6-2 to No. 15-seeded Italians Simone Bolelli and Fabio Fognini, but the Bruin and his partner’s 7-6(6), 6-3 victory in their introductory matchup against Fucsovics and Alex Molcan was enough to warrant a triumphant howl from Smith.

Govind Nanda also made his first main draw appearance at a major by partnering with former Trojan Brandon Holt, but the duo fell 6-3, 6-4 to No. 6 seeds Nikola Mektic and Mate Pavic. After playing much of UCLA’s 2021 campaign at No. 2 singles alongside regular No. 1 option Smith, Nanda departed for the professional ranks instead of remaining in Westwood for his senior season.

Once the No. 11 men’s doubles team in collegiate tennis, McDonald and Giron reunited on the court to form the sole all-Bruin pairing of the tournament. No. 12 seeds Kevin Krawietz and Andreas Mies awaited them in the first round, and the Germans ultimately came out on top with a 6-3, 7-6(5) performance.

Jean-Julien Rojer joined forces with his go-to guy this year – Marcelo Arévalo –where a semifinal bout with No. 2 seeds Wesley Koolhof and Neal Skupski went chalk in a 6-4, 7-5 decision. The pair entered the draw as the No. 3 seed and played together at all four slams in 2022, winning the French Open men’s doubles title.

The women’s doubles bracket featured another Roland Garros champion and former Bruin in Ena Shibahara, who partnered with Koolhof in mixed doubles to claim the crown in Paris earlier this year. Alongside Asia Muhammad, Shibahara constituted the No. 9 seed and notched consecutive straight-set wins to reach the third round at Flushing Meadows. The pair was felled by No. 5 seeds Gabriela Dabrowski and former Trojan Giuliana Olmos 6-3, 3-6, 7-6(8).

But to get there, Shibahara had to emerge victorious over Harrison in a battle of two Bruins, turning in a 6-2, 6-4 triumph in their second-round matchup.

In the final of the five draws, Harrison and Shibahara again represented the blue and gold. In tandem with fellow American Robert Galloway in the mixed doubles bracket, Harrison was served a 6-3, 7-5 defeat by No. 4-seeded Australians Storm Sanders and John Peers. Shibahara made it a couple of steps further with Franko Skugor but was booted in the quarterfinals at the hands of Zhang Shuai and Pavic 7-6(5), 4-6, 10-3.

Alumni of UCLA men’s and women’s tennis will be back in Grand Slam action when the 2023 season commences with the Australian Open in January. 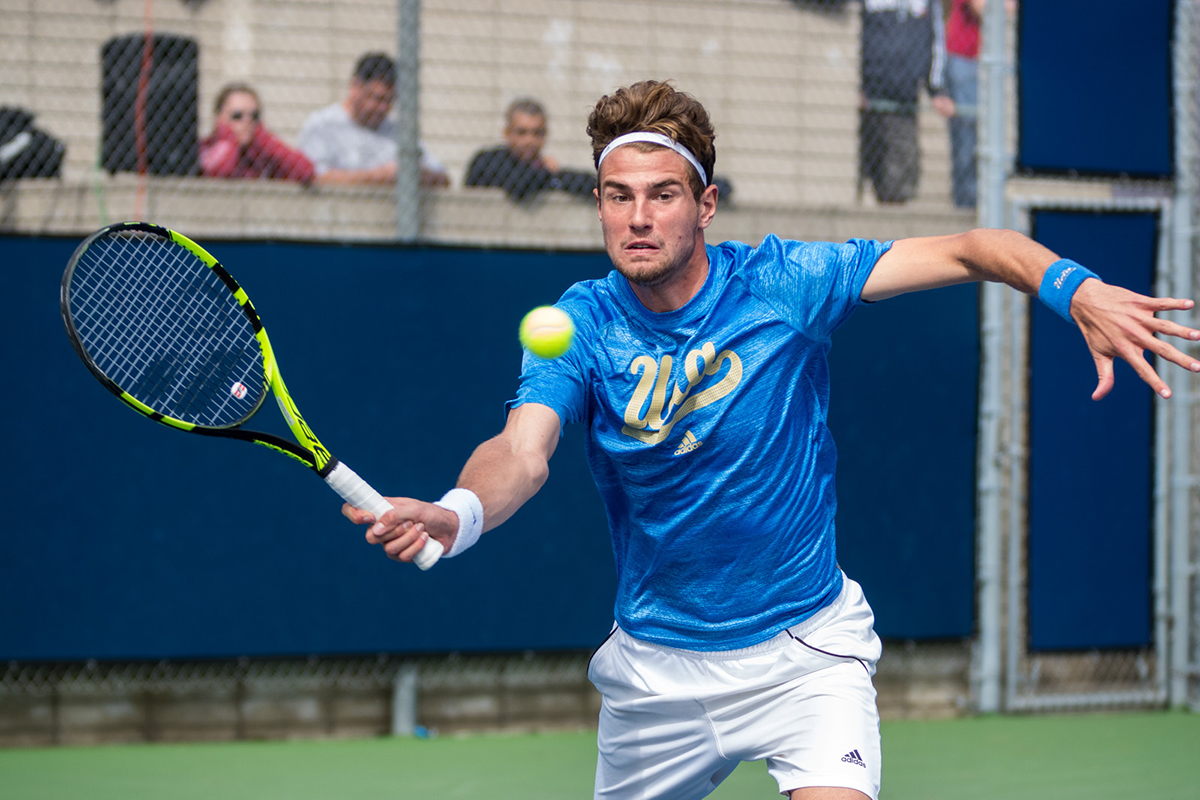 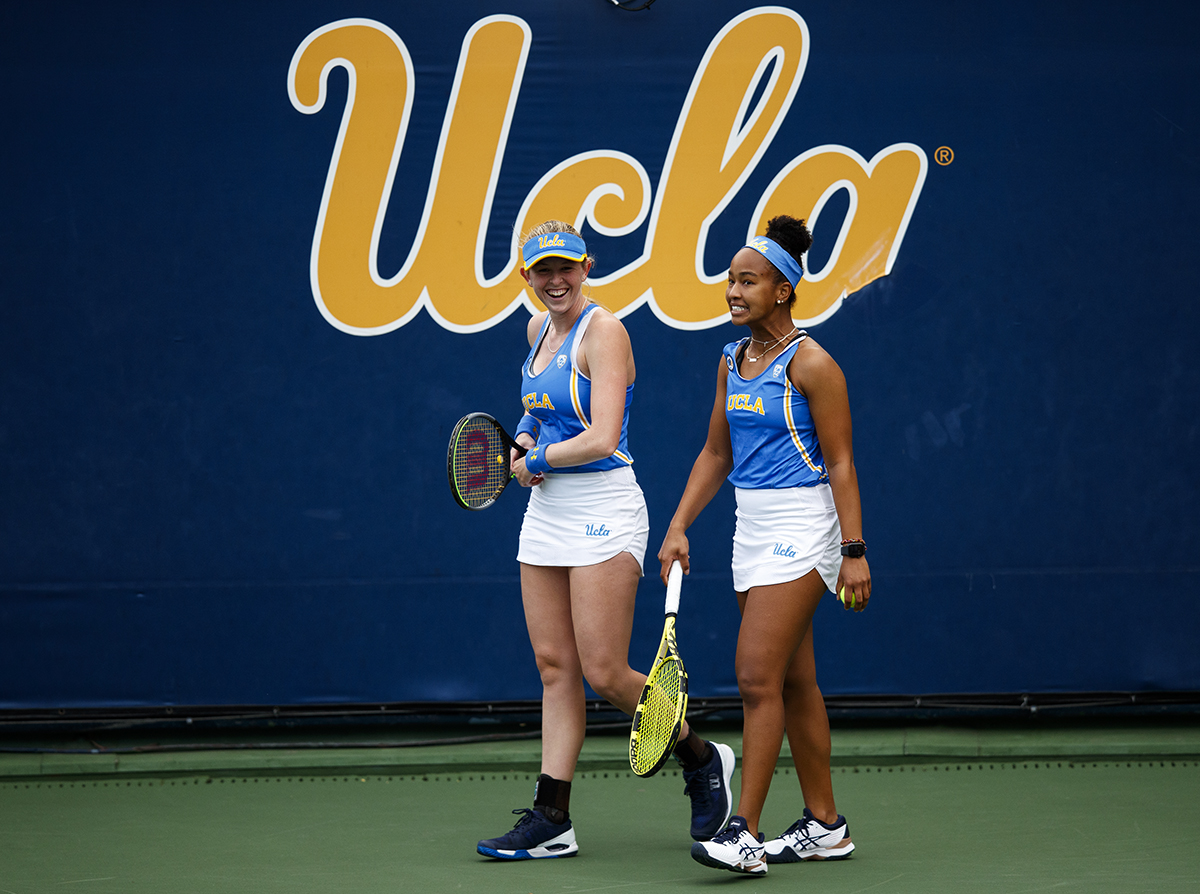 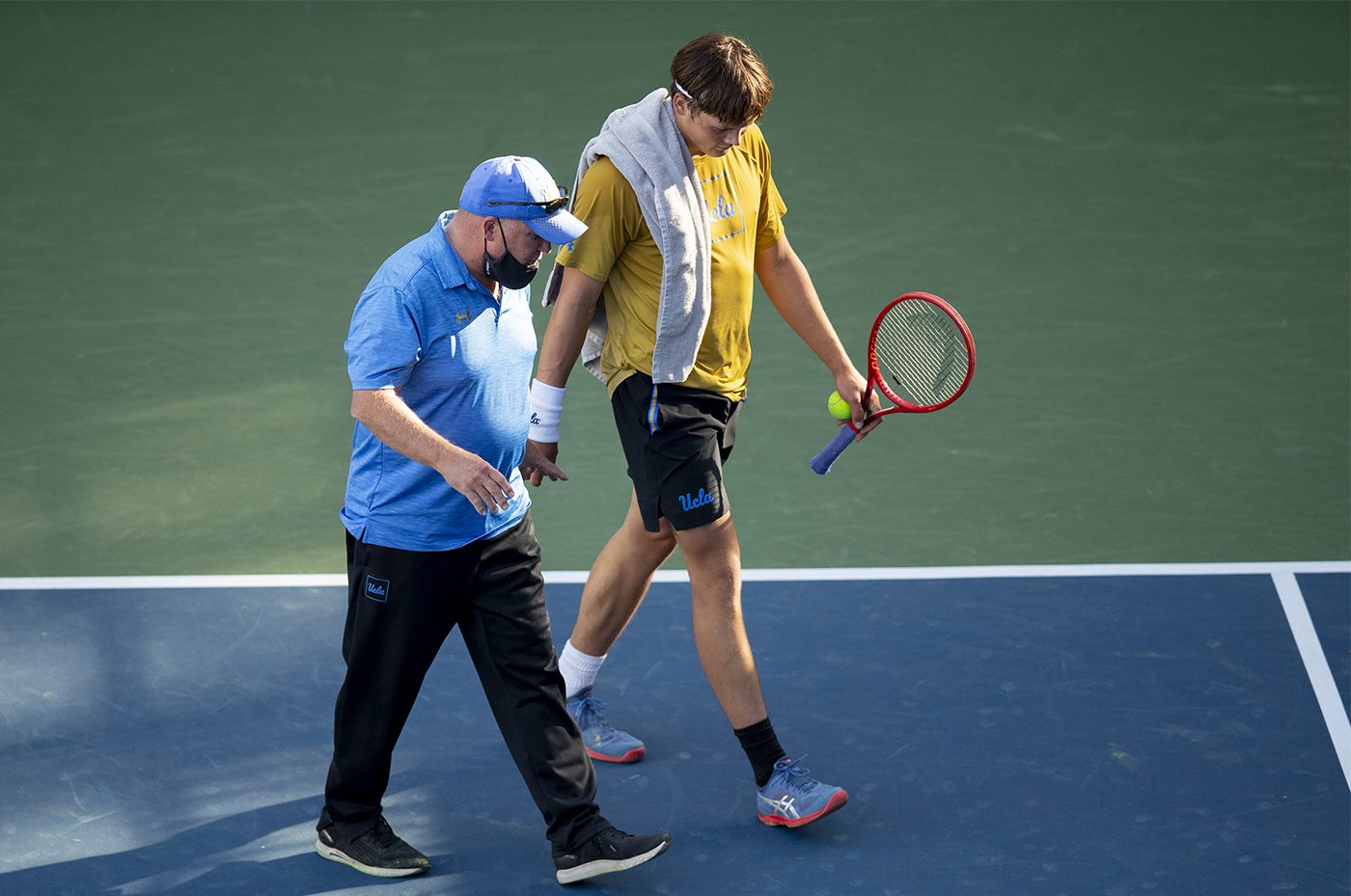 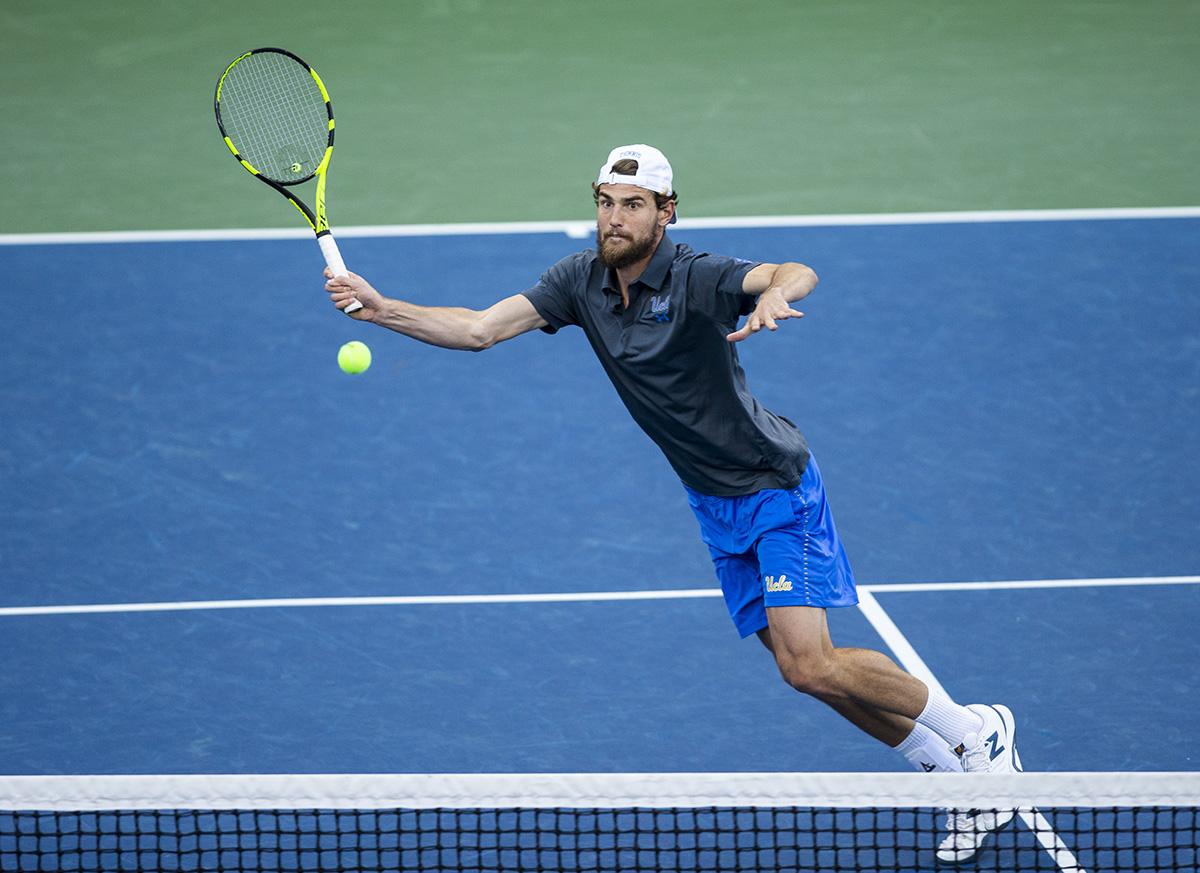