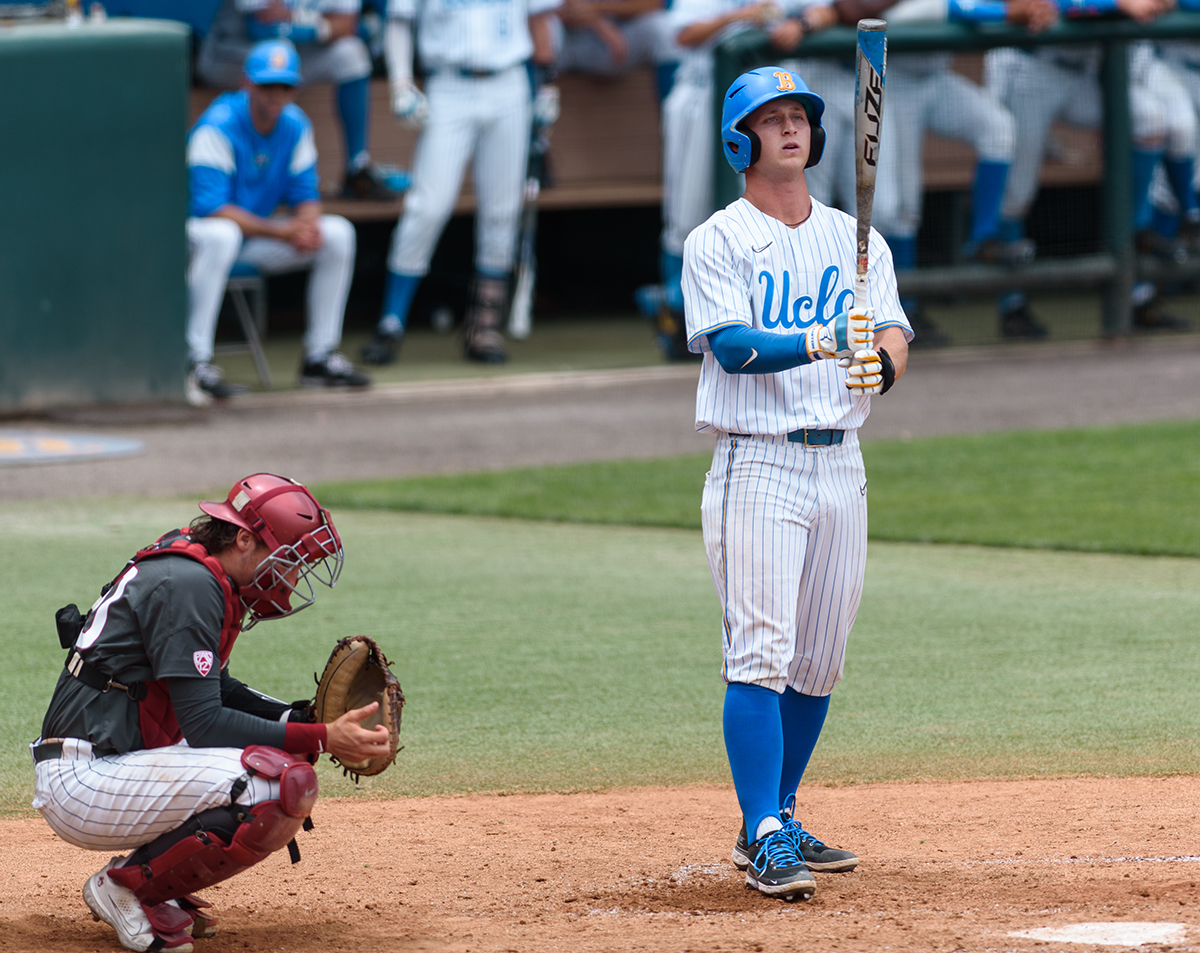 With two on and two out, Cody Schrier stepped up to the plate.

Down to his final strike, the freshman shortstop squared up a 2-2 breaking ball, barreling it to the opposite field and delivering a win in walk-off fashion.

“I was hitting balls good all weekend. Nothing was really falling,” Schrier said. “It was about time that something got squeezed through.”

Behind Schrier’s game-winning knock, No. 23 UCLA baseball (33-18, 17-10 Pac-12) secured an 8-7 win and a series sweep over Washington State (23-26, 9-18) on Sunday at Jackie Robinson Stadium. After falling behind for the first time during the series in the sixth, the Bruins completed the comeback victory with the walk-off.

UCLA carried a 6-1 lead into the sixth inning, but after three walks, four singles, a hit by pitch and an error, Washington State put up a six spot and claimed a 7-6 advantage. The Bruins needed four pitchers to get through the inning, which ended on an outfield assist from junior right fielder Michael Curialle after a diving tag at home by junior catcher Darius Perry.

Coach John Savage said the inning was a combination of many things going wrong.

“Everything you can think of happened,” Savage said. “We can’t have innings like that at this time of the year. It was disappointing.”

The Bruins’ backstop and corner outfielder teamed up again in the bottom of the sixth to knot the game at seven each. Perry led off with a walk and eventually reached third base after a groundout and flyout before being driven in by Curialle’s opposite-field single.

Savage said the team showed resilience after falling behind.

“We responded with the one (run), with two outs the following inning,” Savage said. “You got to give our guys credit. They fought back.”

After using five total pitchers through the first six innings, Savage went to the bullpen one final time to bring out freshman right-hander Alonzo Tredwell. The righty dealt with a baserunner in both the seventh and eighth innings, including a runner on second after a leadoff double in the latter frame.

Tredwell induced a double play to erase the runner in the seventh then stranded the man on second in the following inning with two strikeouts and a groundout.

“Obviously, leadoff double isn’t ideal, but we’d like to leave people where they are,” Tredwell said. “My mindset was just, ‘Keep him on second base, don’t let him score.’”

After Tredwell posted his third straight zero in the top of the ninth, sophomore center fielder Carson Yates reached on a one-out single in the home half of the inning before stealing second. With two outs and a base open, the Cougars opted to intentionally walk graduate student left fielder Kenny Oyama to bring up Schrier in a righty-on-righty matchup.

Schrier’s game-winner gave UCLA the sweep a week after it was swept by Washington, sending the freshman’s teammates out of the dugout and onto the field in a mob behind second base.

Across the three games against the Cougars, the Bruins tallied 22 total runs, including 13 in first innings. Sunday was the third consecutive game of at least four runs in the first frame, backed by sophomore third baseman Kyle Karros’ second three-run homer in as many days.

Schrier said the Bruins’ offensive performance in the series was exceptional.

“It’s been really good, especially coming right off the bat in the first inning,” Schrier said. “That’s huge, kind of gaining momentum for the whole game. That just really carries over.” 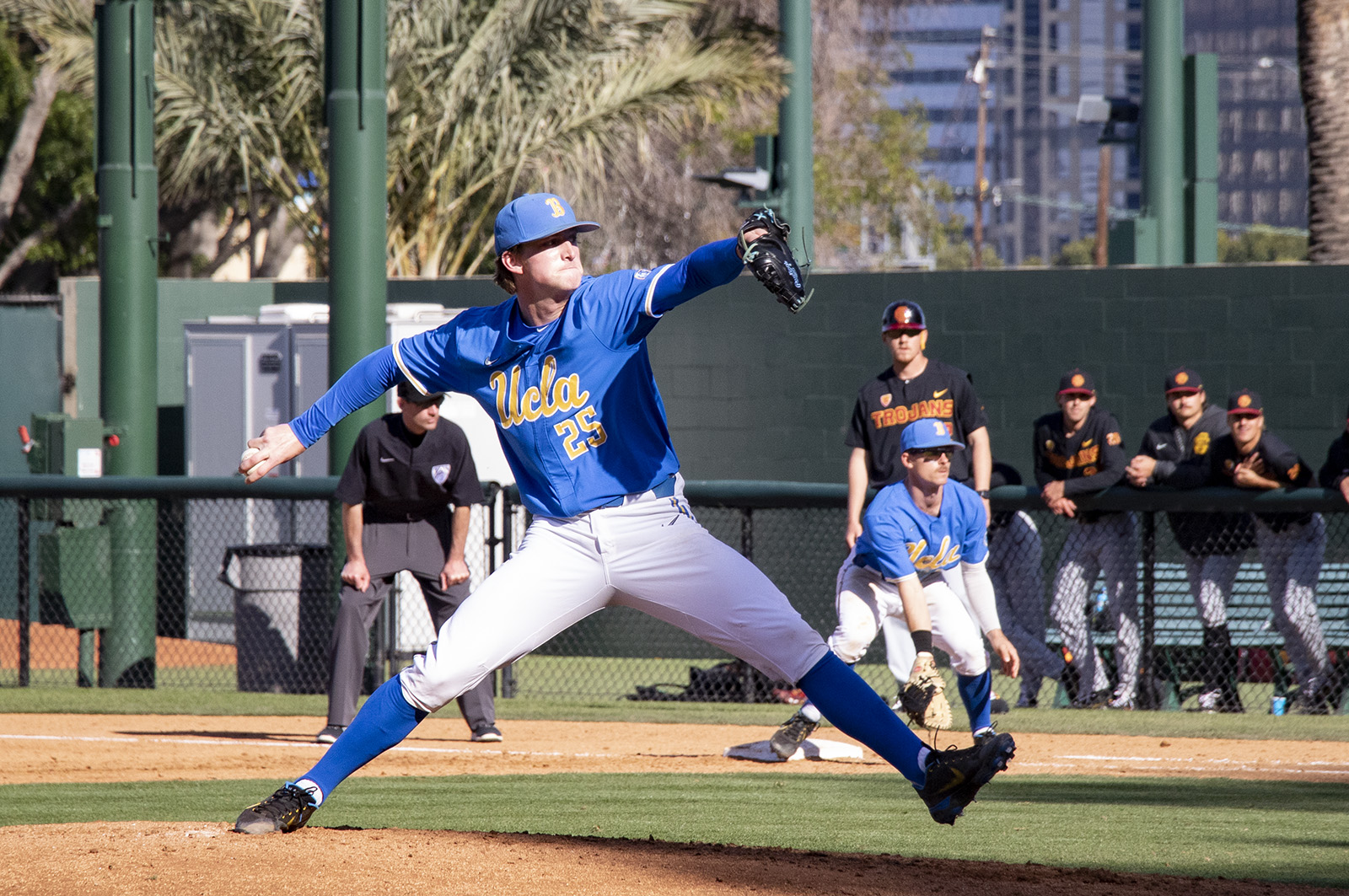 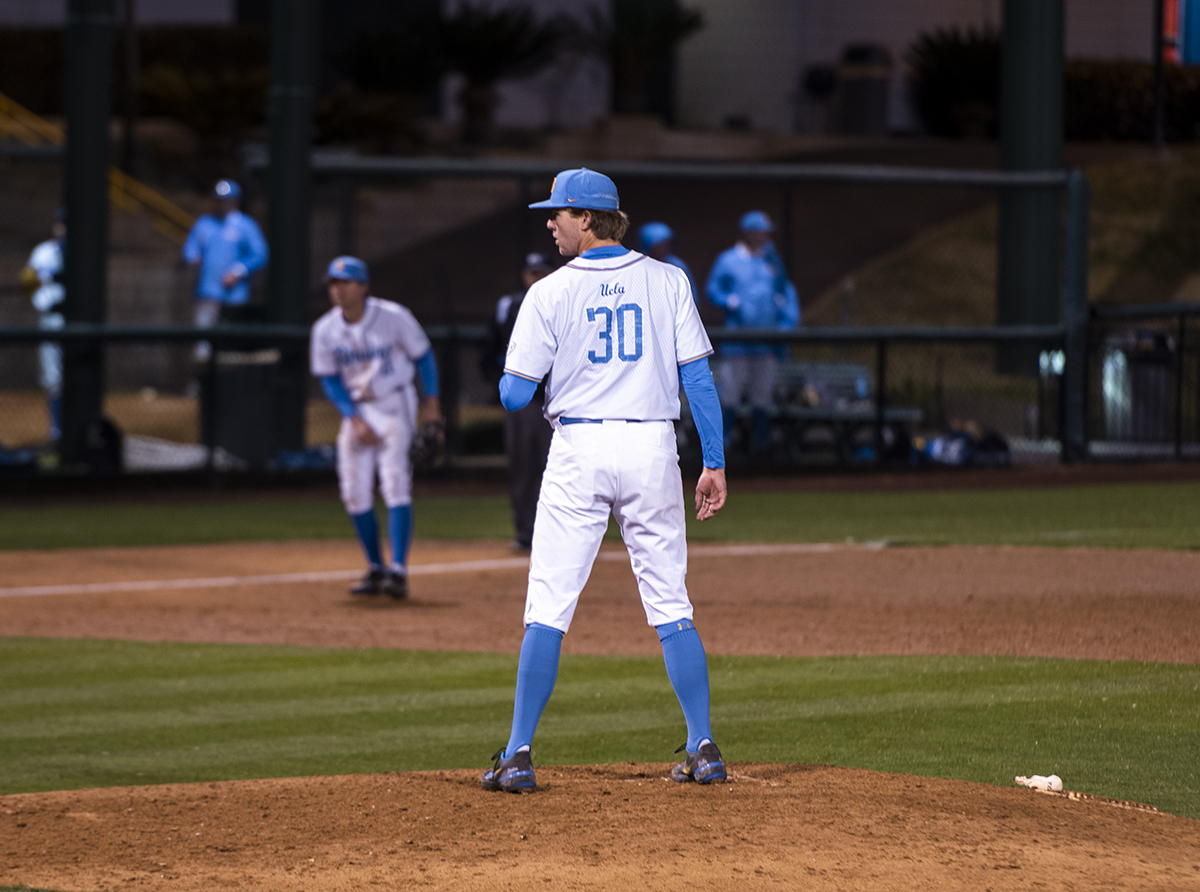 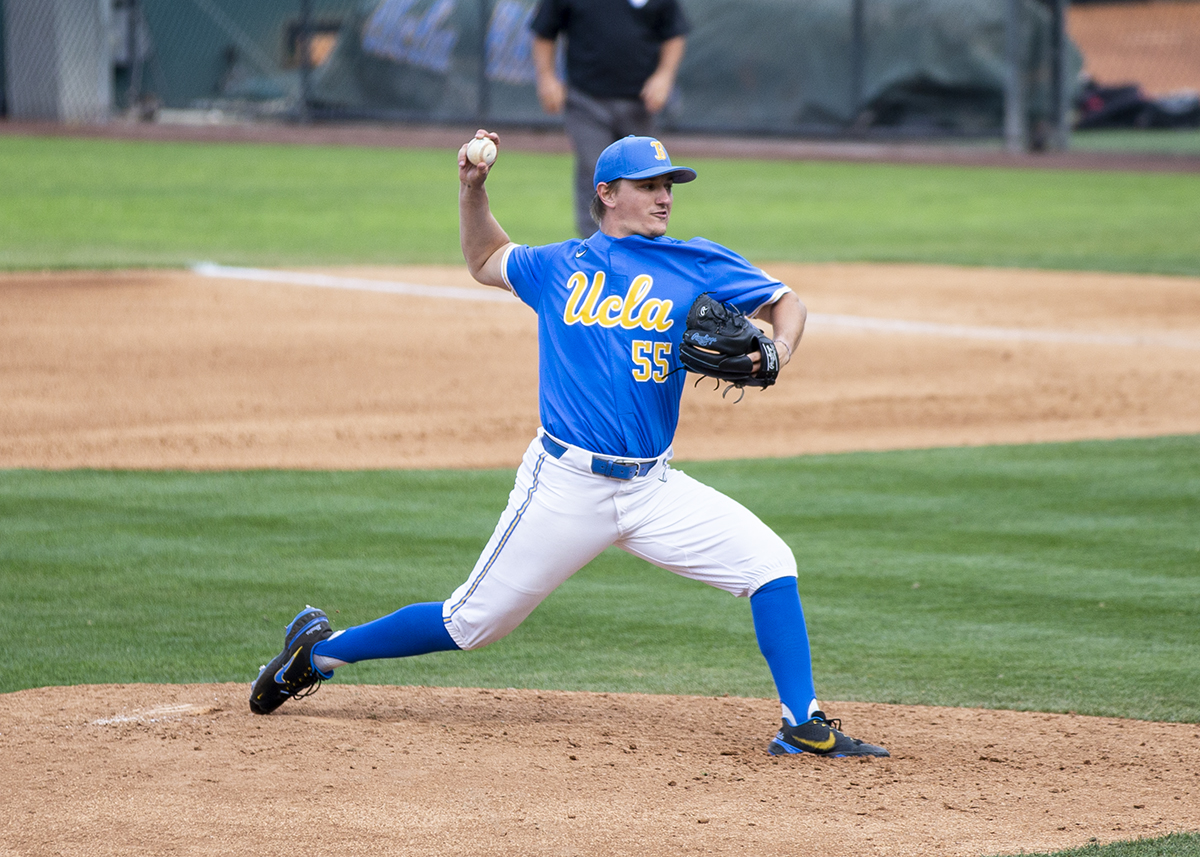 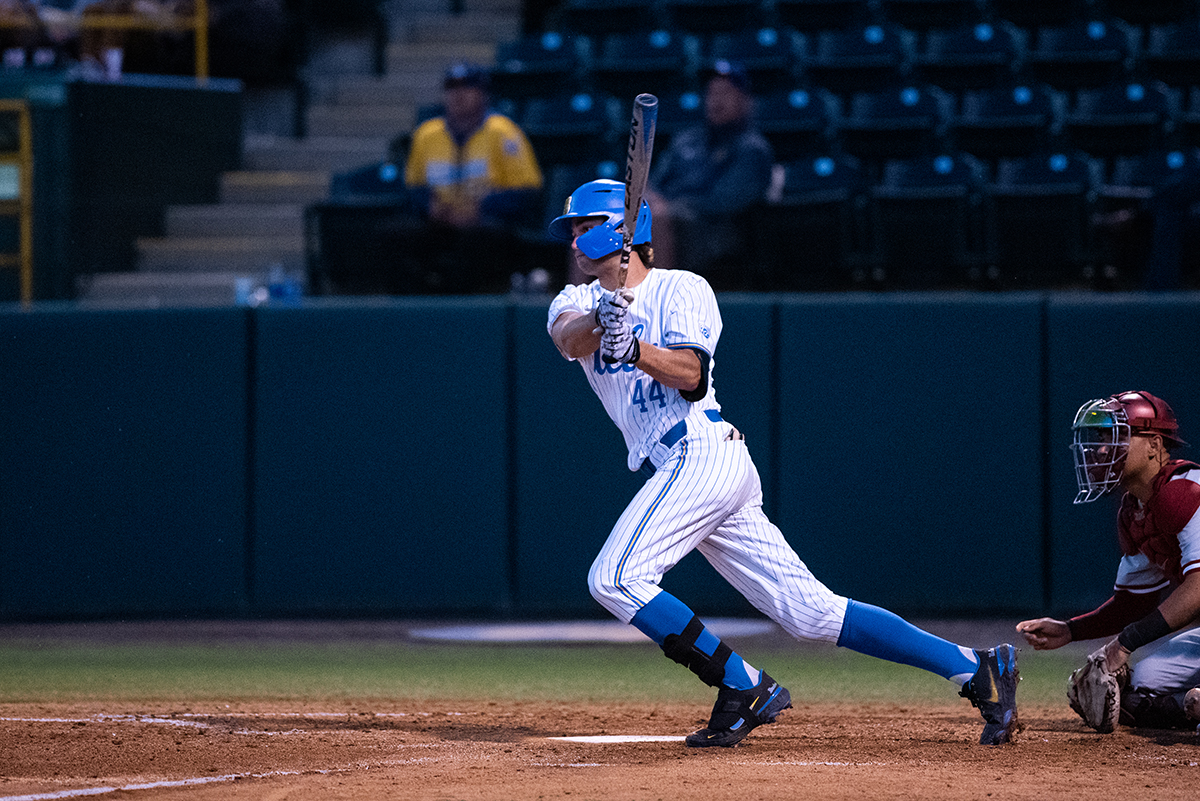