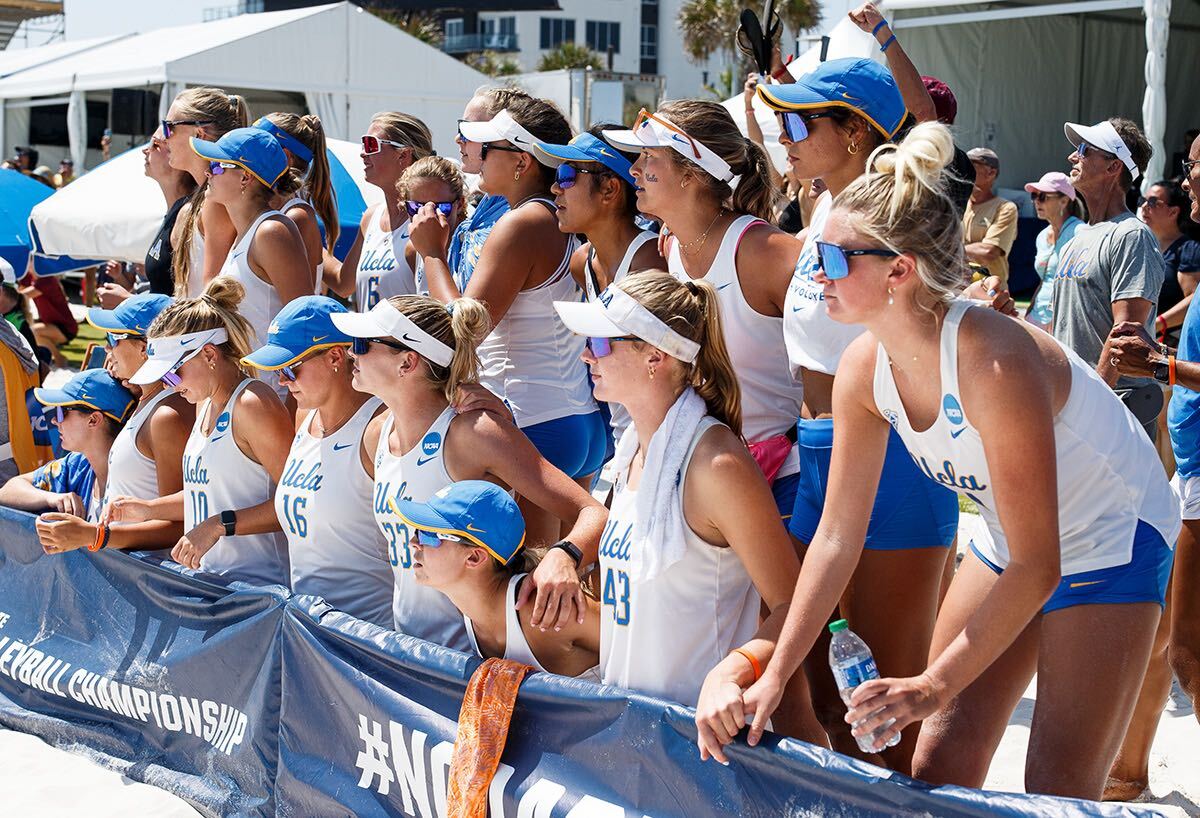 Members of No. 3 seed UCLA beach volleyball look on at the play of their court one teammates in a dual against No. 5 seed Florida State on Sunday. The blue and gold lost a third-set tiebreaker on the top court, handing the Seminoles the final point of the dual and ending its season before the NCAA tournament final for the first time since 2017. (Joseph Jimenez/Daily Bruin)

It came down to court one.

And, despite a third-set lead from their top pair, the Bruins will not be playing in the final dual of the season for the first time since 2017.

Ahead of Sunday’s dual, the Bruins had won both of the two previous matchups against the Seminoles by a score of 3-2, with the contest-clinching point in both matches decided by a third-set tiebreaker.

“It felt like a week-long match,” said coach Stein Metzger. “It was not a good start by us, but I have to credit them with righting the ship after a while and really settling into the game by making some incredible plays.

Court one’s pair of Denaburg and Winkle faltered 21-16 in its opening frame, losing its third-straight set to a Seminole pair this year. In both victories over Florida State this season, UCLA had dropped its matches on the top court.

Punctuated with a Van Winkle kill, the duo forced a decisive third set with a 23-21 response.

Van Winkle said she and Denaburg entered the second frame with a new attitude.

“At that moment, we’re kind of like, ‘Well, we have nothing to lose here,’” Van Winkle said. “Just having that mindset really helped in just staying aggressive the whole time.”

The pair of American Volleyball Coaches Association First-Team All Americans held a one-point advantage at the first side switch in the final period but found themselves trailing six rallies later.

Denaburg and Van Winkle could not flip the margin, as their season screeched to a halt with a 15-13 loss.

Despite the loss, Denaburg said her on-court partner has been instrumental in the Bruins’ performance this year.

“The biggest thing is that we just didn’t quit, and we really wanted that for our team,” Denaburg said. “Though it didn’t happen, I’m honestly so proud of her. She was such a great partner to me all year.”

Graduate student Marlie Monserez and sophomore Rileigh Powers – the dual-clinching pair in the two programs’ previous meeting April 15 – played in the first flight of matches and on a different court.

Facing the Coastal Collegiate Sports Association Pair of the Tournament in Florida State’s Morgan Chacon and Jordan Polo, Monserez and Powers battled through a tie as late as 18-all in the opening frame. The Bruin duo sealed off a 3-1 set-winning run with a cross-court kill from Monserez, marking the duo’s first set victory in three days and second of the tournament.

The court two pairing of sophomore Devon Newberry and redshirt sophomore Jaden Whitmarsh took on Alaina Chacon and Madison Fitzpatrick – a duo that won 11 of its 12 tournament sets entering Sunday. Newberry and Whitmarsh became the second pair to emerge victorious in a frame against the Seminole duo with a 25-23 triumph in set one.

“We battled toe-to-toe with all of them,” Metzger said.

Both court two’s and court four’s matches were forced to a third-set tiebreaker, each with second frames decided by two scores. Coming off their sixth set of the tournament clinched by a two-point margin, Newberry and Whitmarsh tallied another one, with the sophomore slamming down the winning kill of the 16-14 third set.

With the victory, Newberry and Whitmarsh broke Alaina Chacon and Fitzpatrick’s undefeated tournament streak. The same could not be said for Monserez and Powers, however, who lost their final set to tie the dual at a game apiece despite forcing four match points.

“We certainly had opportunities down the stretch,” Metzger said. “We converted some and some we didn’t – it just came down to a couple of touches.”

It wasn’t enough, however, and the Bruins’ season ended the earliest it has in five years. 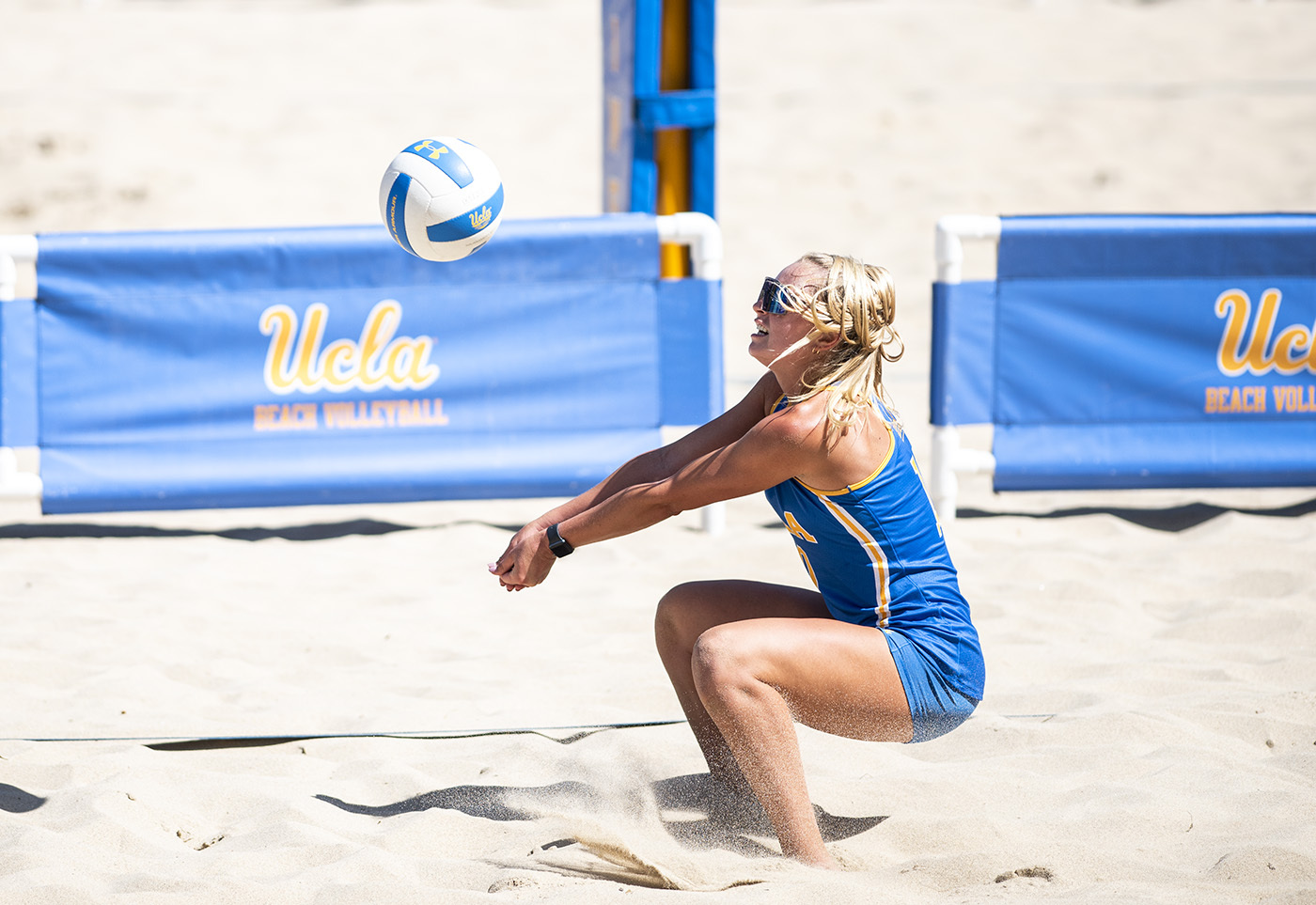 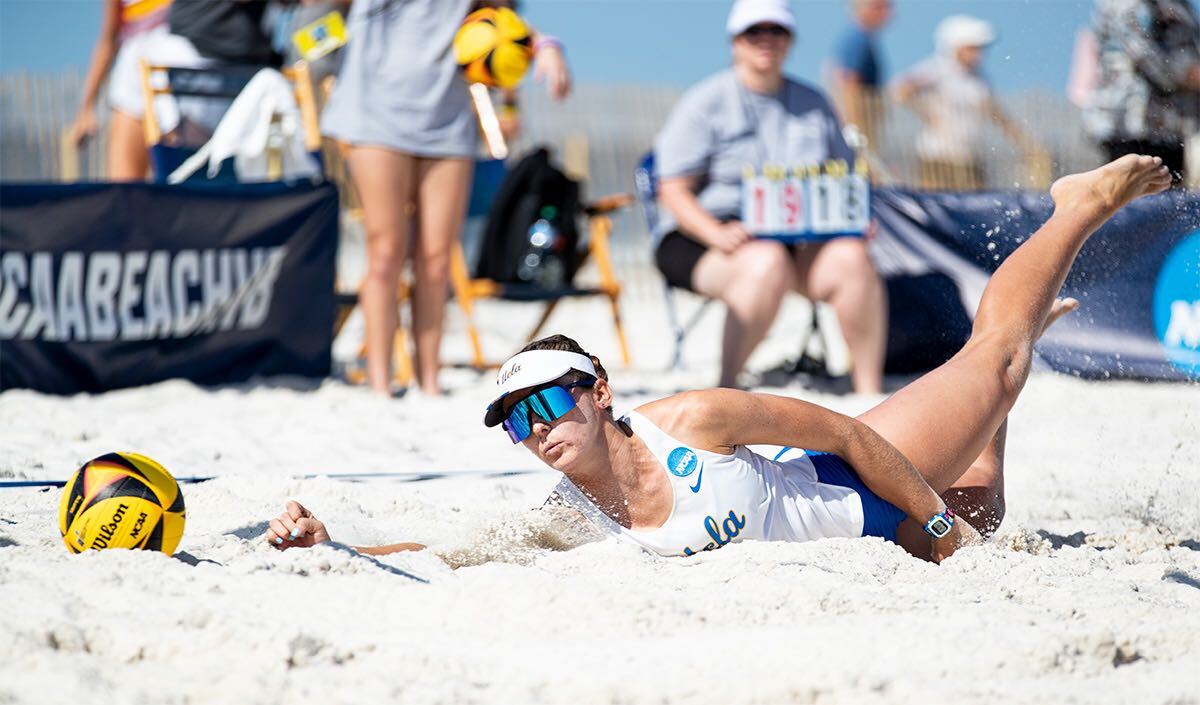 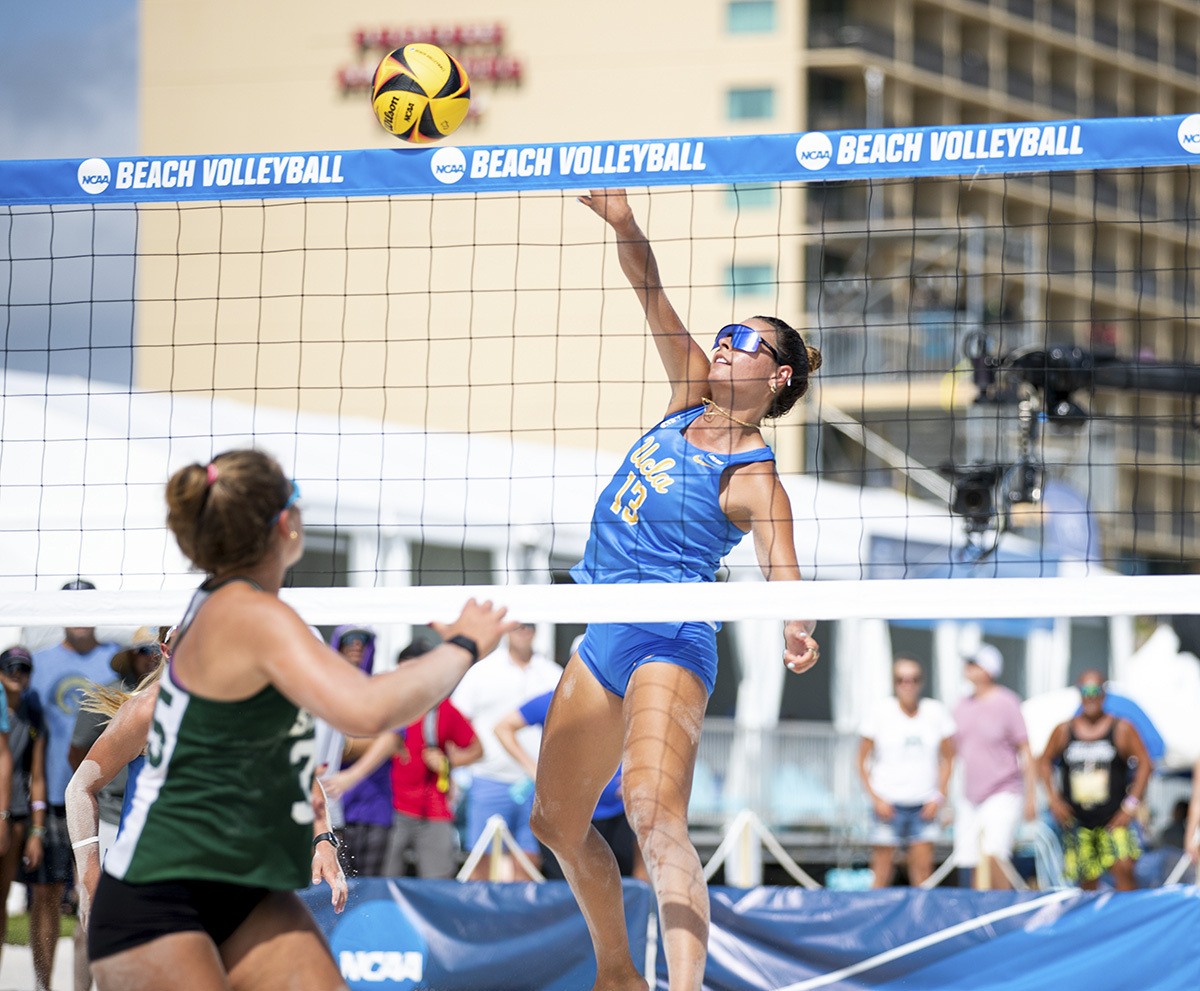 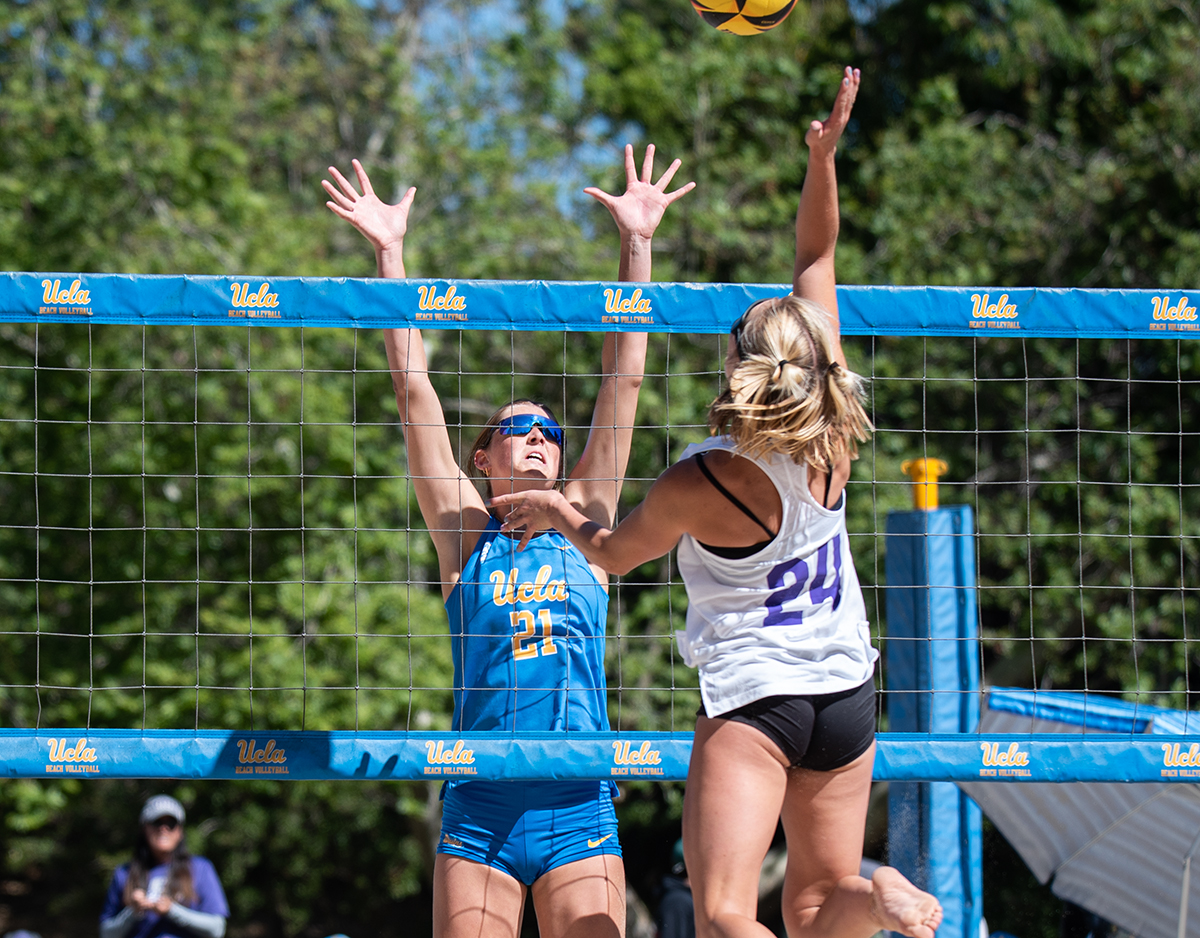