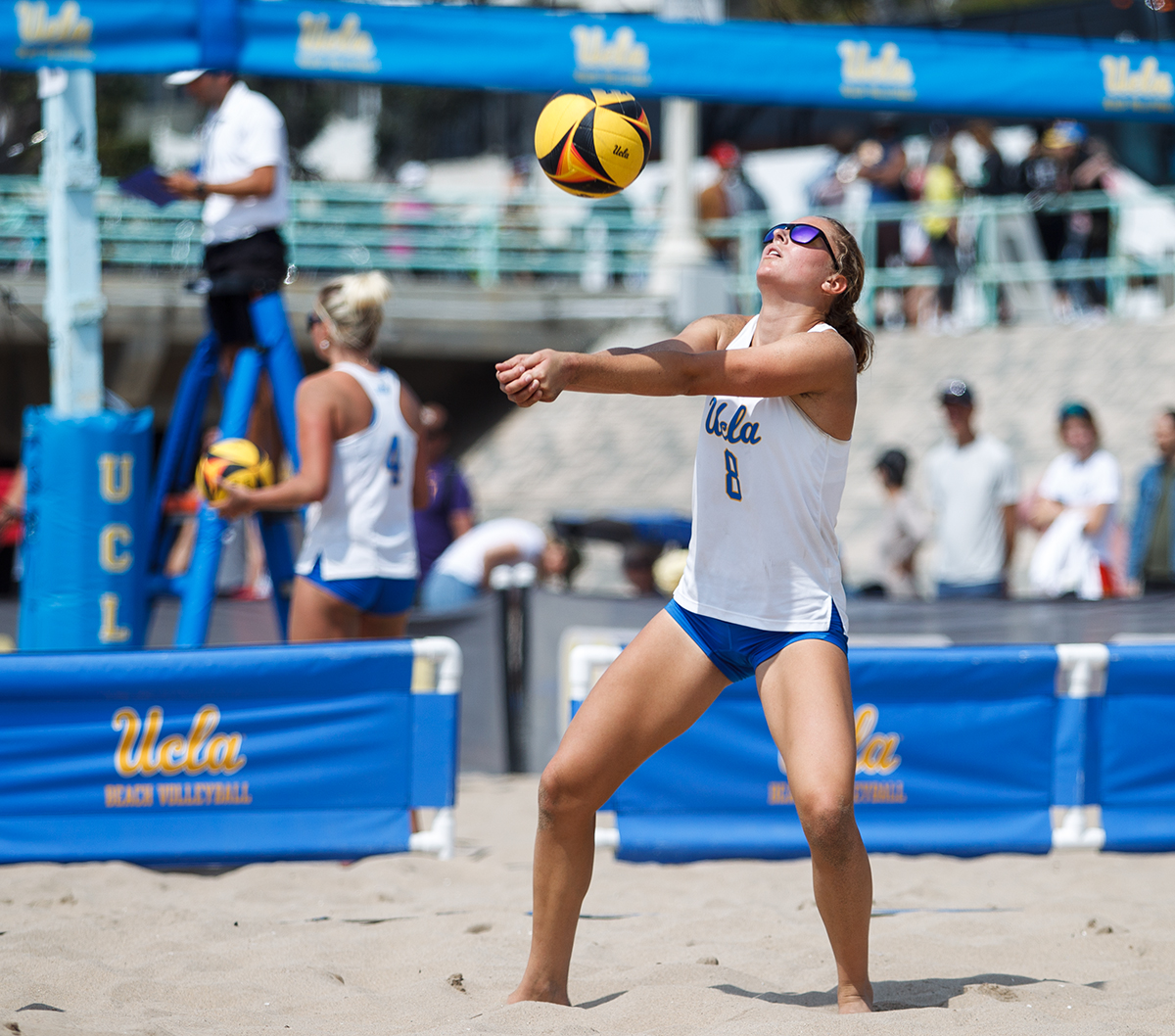 Freshman Sophie Moore receives the ball during a dual against LSU on April 3. No. 3 UCLA beach volleyball will close out the season against No. 4 Loyola Marymount and No. 1 USC. (Joseph Jimenez/Daily Bruin)

The Bruins will play their final home matches before launching onto a bigger stage.

In its last two duals before it heads to the postseason, No. 3 UCLA beach volleyball (27-4, 7-0 Pac-12) will face two opponents it also saw this past weekend. The blue and gold will first compete against No. 4 Loyola Marymount (25-5, 4-0 WCC) on Wednesday at Mapes Beach before matching up against No. 1 USC (27-1, 1-0 Pac-12)on Friday at Merle Norman Stadium.

Coach Stein Metzger said while the experience levels of USC and Loyola Marymount are significant, he has confidence that this team can deliver different results in the upcoming duals.

“Both teams have quite a number of seniors and super seniors,” Metzger said. “They are disciplined, error-free volleyball-type teams, but they are both teams that we have beaten in the past and teams that we can continue to beat.”

Among the competing duos in the Bruins’ final regular season contests are freshmen Sophie Moore and Natalie Myszkowski. The court four duo defeated the Lions and but lost to the Trojans last weekend.

Prior to competing on the collegiate scene, Moore competed in an AAU national championship and the Junior Olympics and was a member of the national team. However, she said her mindset approaching the postseason is one of appreciation and excitement.

“I am so grateful to be able to play here and on these huge stages,” Moore said. “I am getting a lot of support from the upperclassmen and everyone who has been here before by listening to their experiences and trying to visualize it.”

With two duals left to prepare for the Pac-12 and national championships, Myszkowski said she hopes the Bruins can continue to improve upon their skills both individually and as a team.

“We are going to keep working on our flow together and getting connected as a team,” Myszkowski said. “We need to continue to push through, stay together, and communicate.”

The Bruins have competed in 31 contests this season, a majority of which were against teams they will meet in the postseason. Metzger said with the 32nd and 33rd matches approaching, the team will control its own destiny.

“At this stage in the game, it is just a matter of showing up and playing well,” Metzger said.

UCLA will take on Loyola Marymount at 4 p.m. on Wednesday at Mapes Beach. 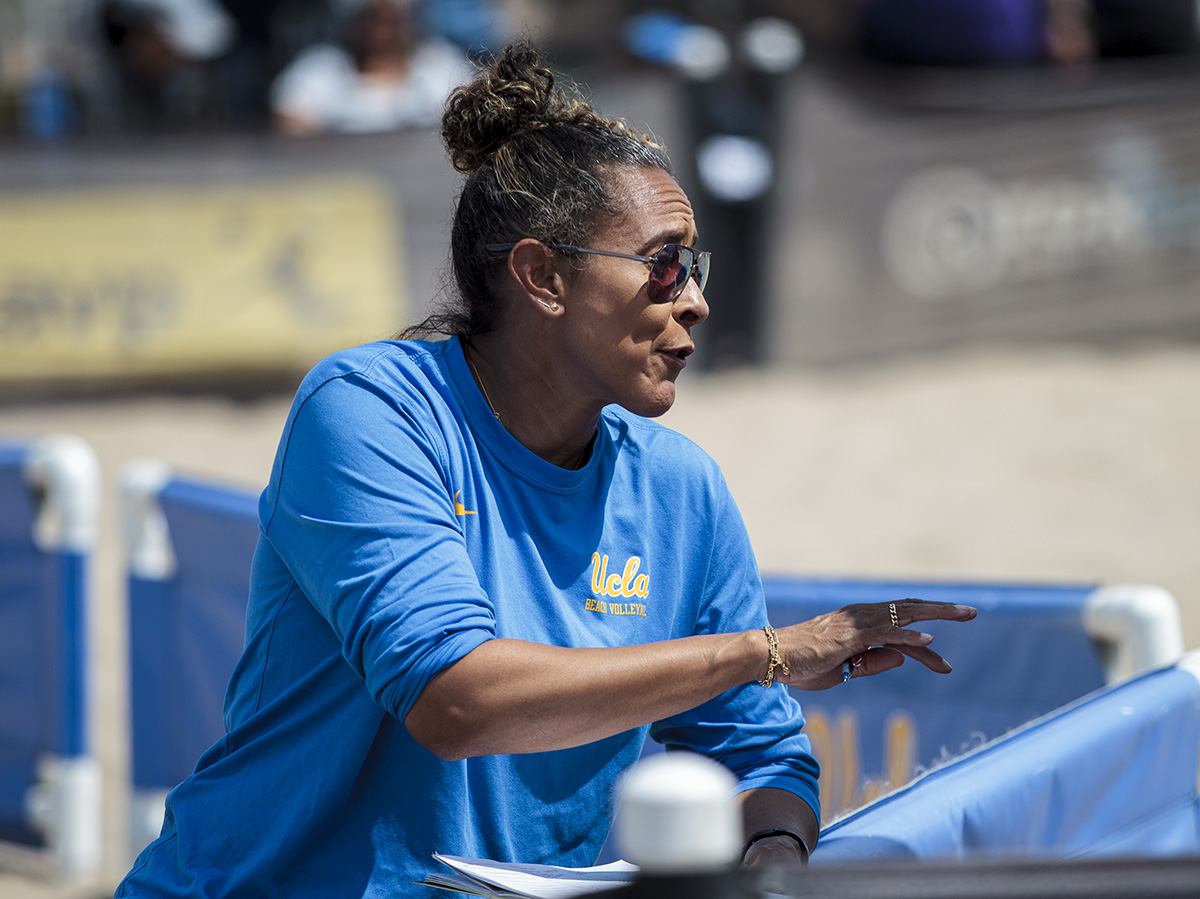 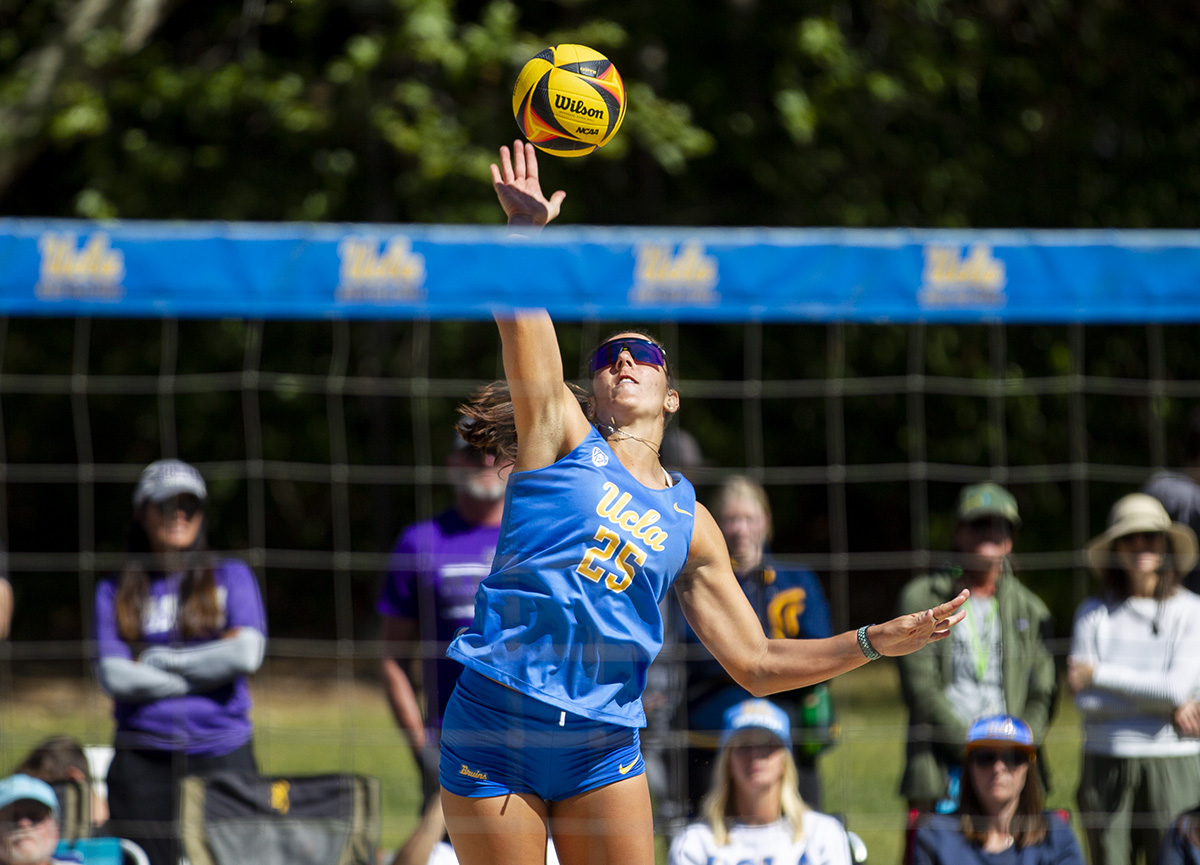 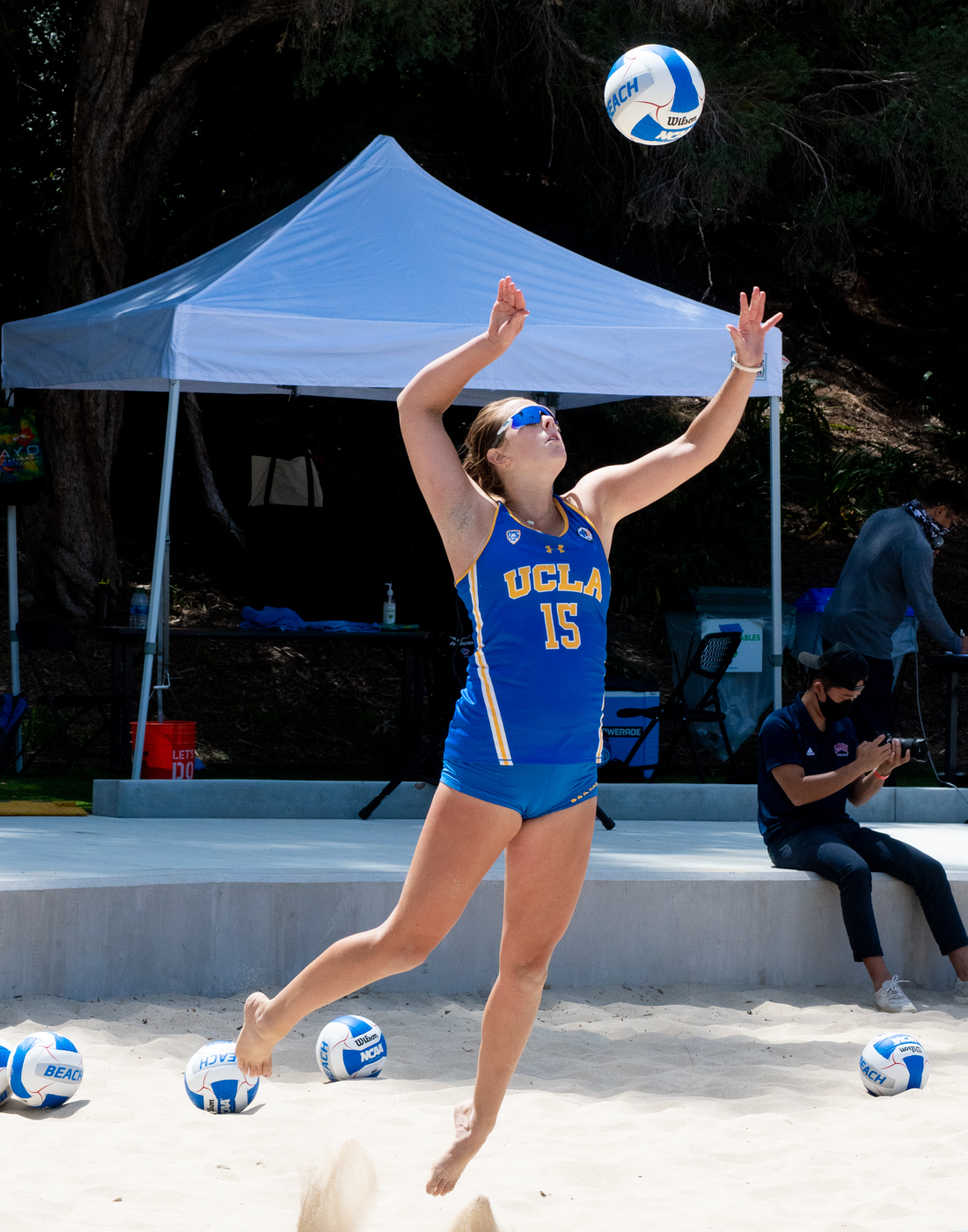 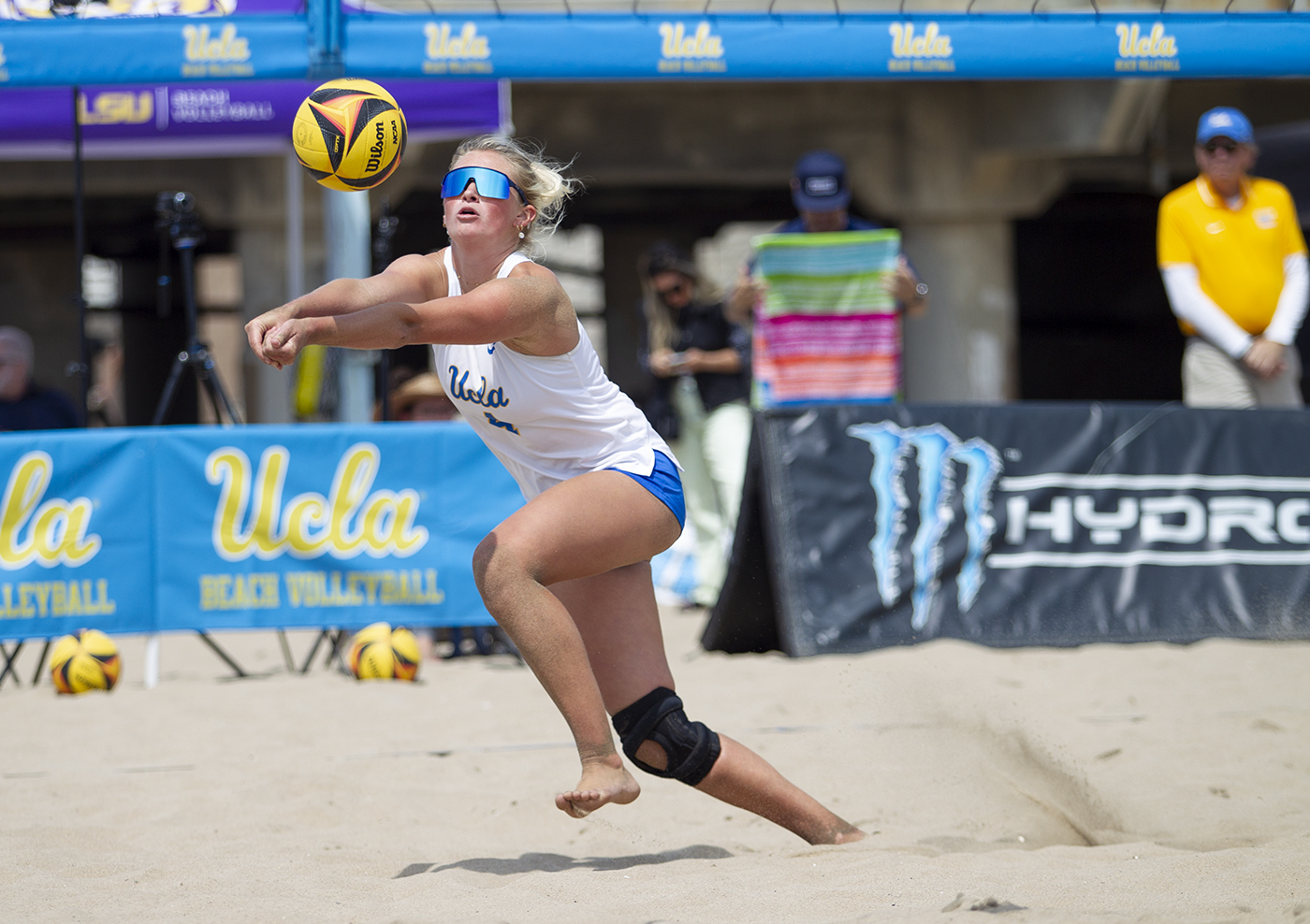 No.3 UCLA beach volleyball falls to No. 6 Loyola Marymount, No. 1 USC