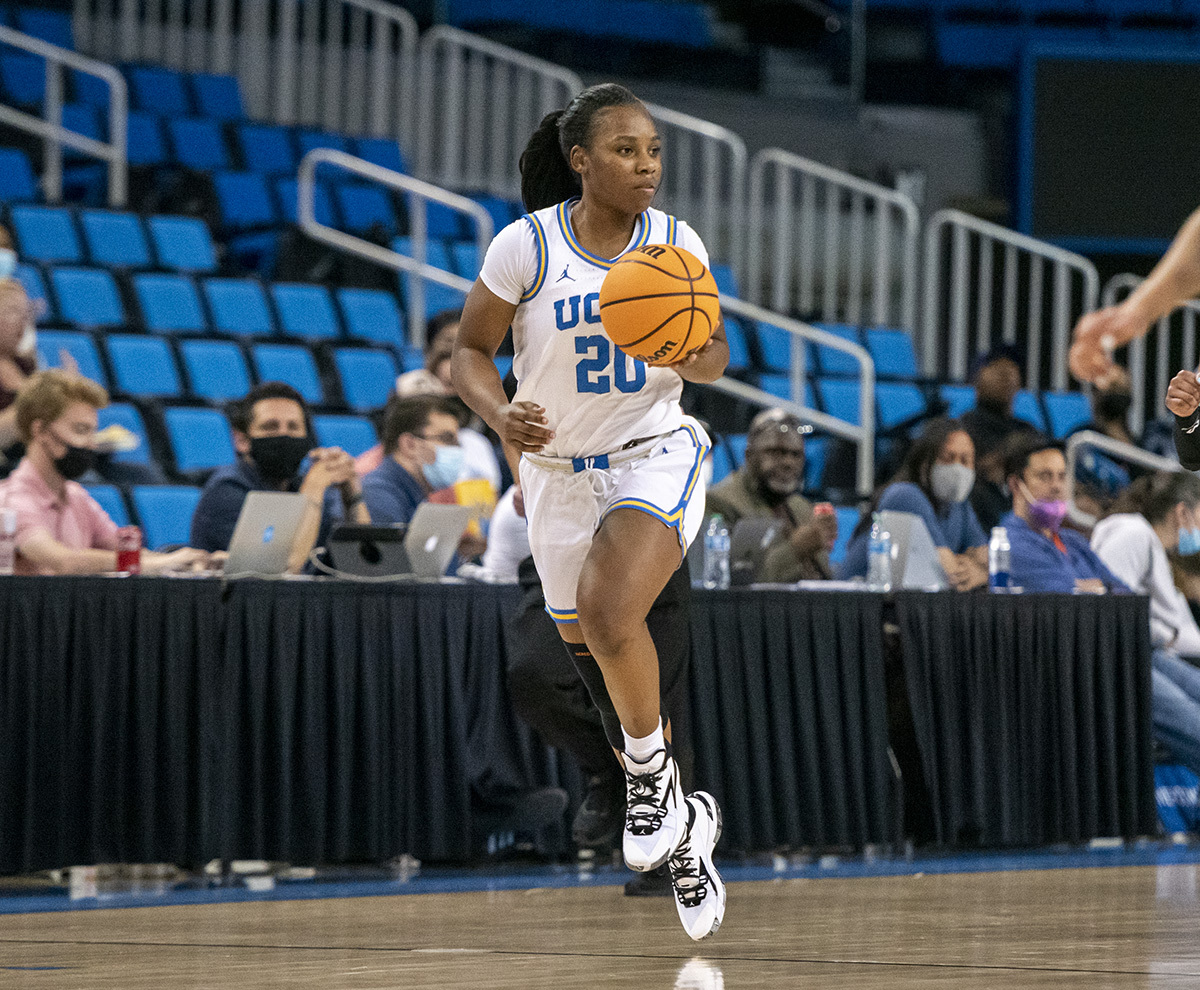 The Bruins turned the Beavers’ turnovers into a semifinal appearance.

UCLA women’s basketball (18-12, 8-8 Pac-12) conquered Oregon State (17-14, 6-9) by a score of 74-66 to claim a spot in the Women’s National Invitation Tournament semifinals. After previously falling to the Beavers during their conference run on Jan. 30, the Bruins were able to score 13 points off the Beavers’ 14 turnovers, accounting for the eight-point difference.

Beaver forward Jelena Mitrovic scored the first points of the contest but was quickly followed by a layup from graduate student forward IImar’I Thomas. Junior guard Charisma Osborne then began her run, connecting on back-to-back 3-pointers to bring the score to 8-4 in favor of the Bruins with 6:30 left in the first quarter.

Osborne said UCLA is a different team from the first time it faced Oregon State.

“We were talking about how they didn’t see the best of us last time,” Osborne said. “We’ve just grown a lot since we first played them – whether that’s defense, rebounding, offensively, gaining chemistry with one another.”

Redshirt freshman forward Izzy Anstey rolled in a layup for her first points of the game later in the first, continuing an 8-0 run for the Bruins. Osborne followed her lead with a layup of her own, accounting for eight of the blue and gold’s first 12 points.

Behind Osborne’s two triples, UCLA finished the quarter shooting 60% on 3-point attempts, whereas Oregon State went 0-of-2 from behind the arc. The Bruins led 21-7 going into the second installment of the game, guided by Osborne’s 10 points.

Graduate student guard Jaelynn Penn said the team was ready for the game, and the adversity it faced earlier in the year has helped it advance in the tournament.

Redshirt freshman forward Angela Dugalić continued the lead at the start of the second quarter with a 3-pointer, bringing the UCLA lead to a game-high 17 points. But the Beavers responded with a 12-6 run, putting the Bruins’ advantage at 10 entering the halftime locker room.

Oregon State started the second half outscoring UCLA 11-6. However, the Bruins were able to hold onto their advantage throughout the quarter by capitalizing on the Beavers’ mistakes. The team scored 11 points off Oregon State’s 11 turnovers through the first three frames.

Coach Cori Close said her team’s defense was what made the difference when the Beavers began to make runs.

“We were locked in, we were making them take tough shots, and we were answering,” Close said. “I think when it was really on the line, we found a way to get stops.”

With 23 seconds remaining in the third quarter, a second-chance jumper from Oregon State forward Taya Corosdale brought the Beavers to within five. Including Corosdale’s jumper, Oregon State outscored UCLA 6-1 to close out the penultimate period, trimming the Bruins’ advantage to 49-45 going into the final frame.

Four minutes into the fourth quarter, forward Ellie Mack connected on the Beavers’ first 3-pointer of the game, but it was too little too late for the home team. Osborne collected 11 made free throws in the final frame, bringing her personal total to 31 points and keeping UCLA in the lead.

Close said Osborne’s point total was great, but it’s her leadership she was most impressed with.

“There’s an internal confidence about her,” Close said. “She always draws the most difficult assignment. She’s doing it not 100% physically, she’s doing it with incredible heart and incredible mental toughness.”

The Bruins finished the quarter with a game-high 25 points, which was enough to defeat the Beavers 74-66 and advance to the WNIT semifinals. 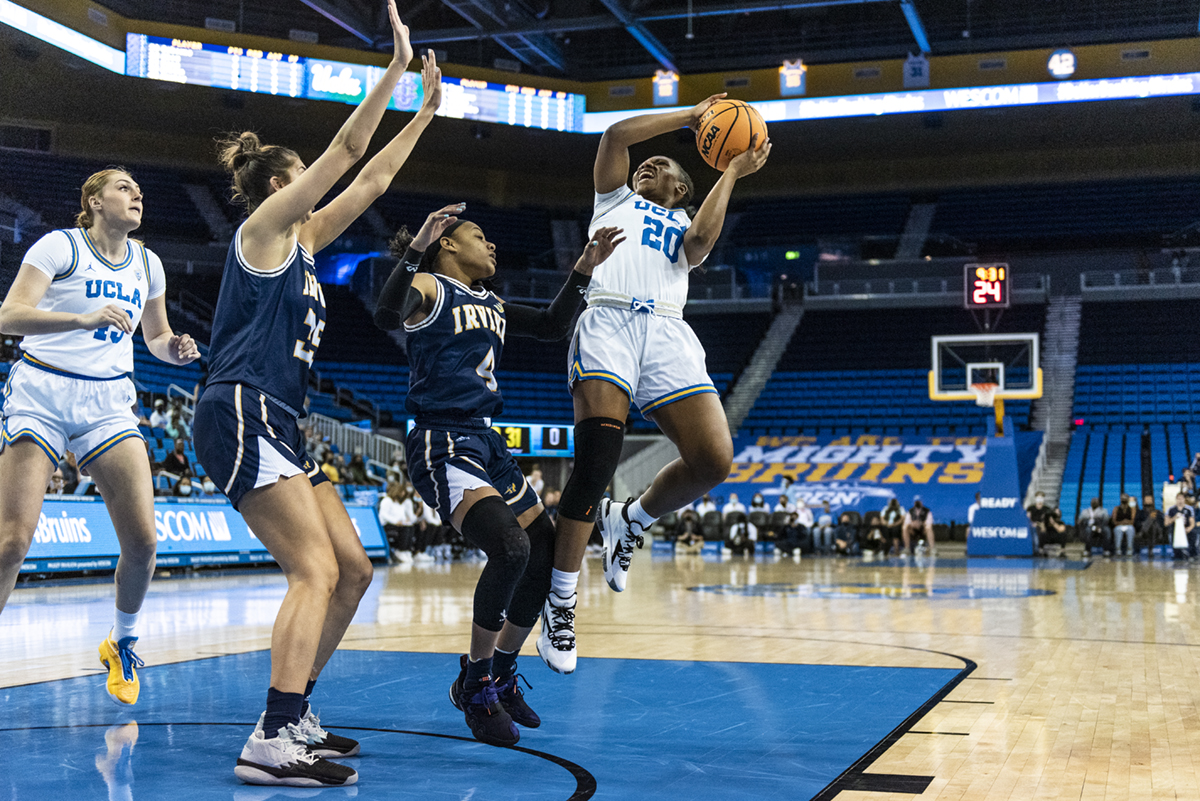 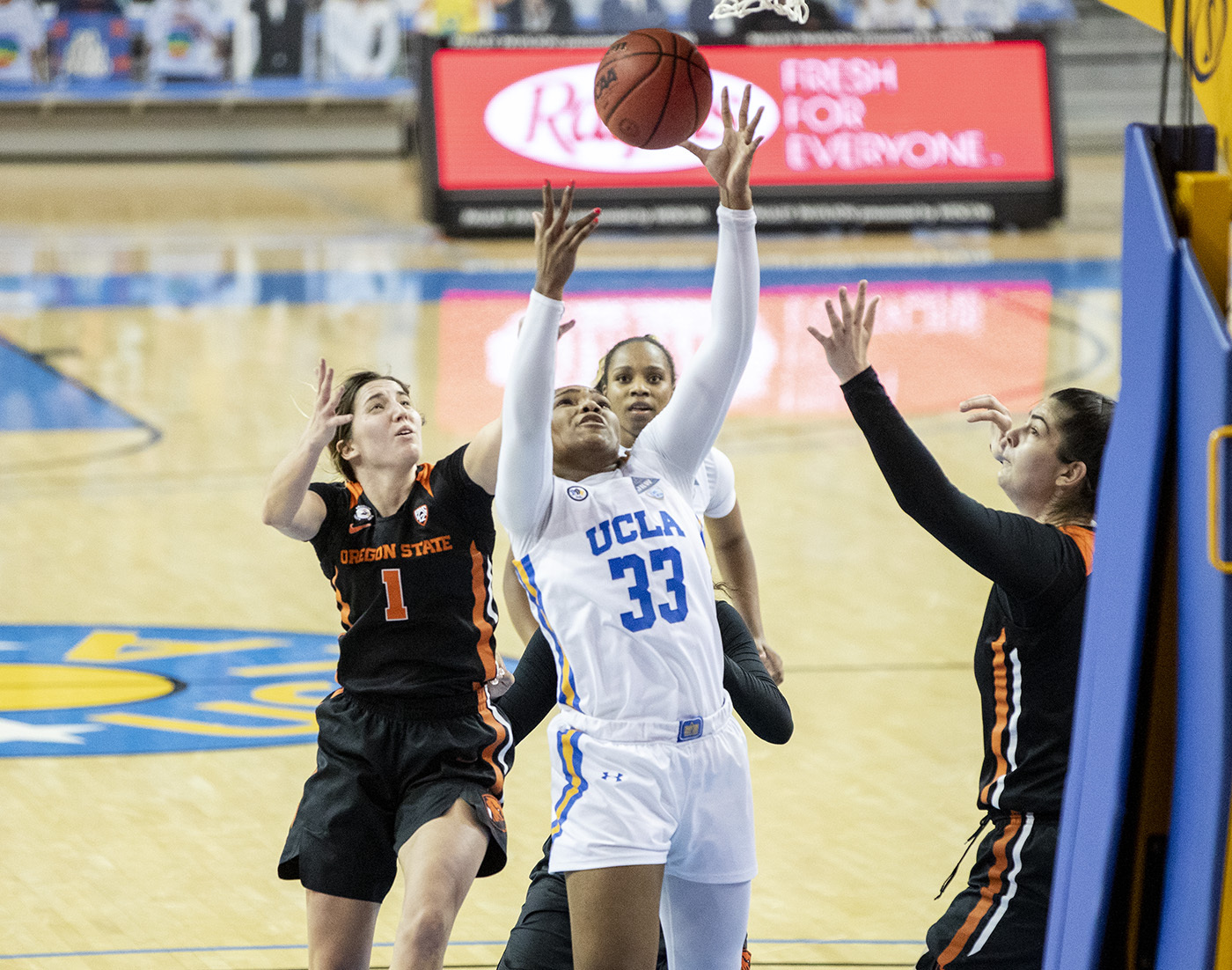 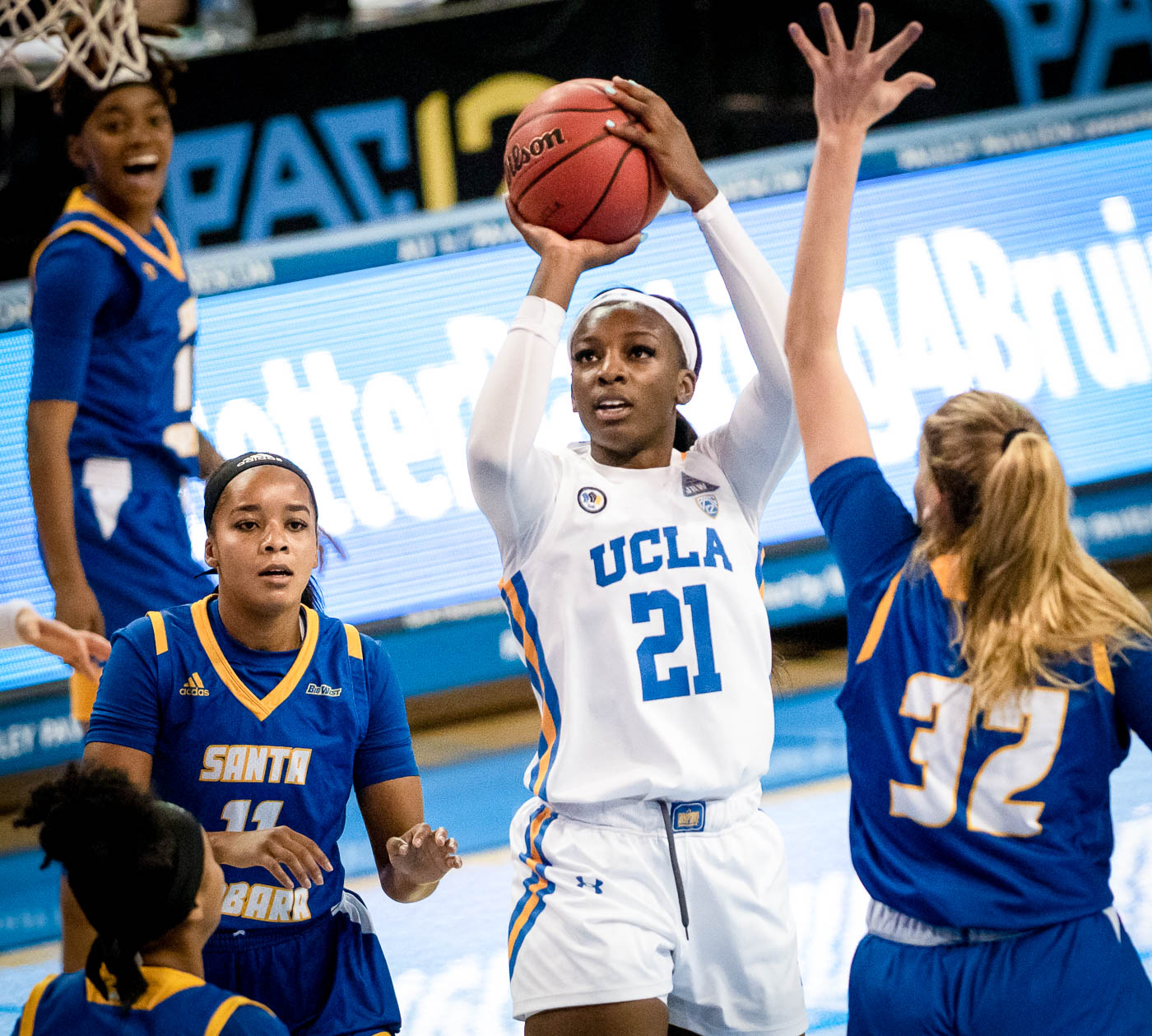 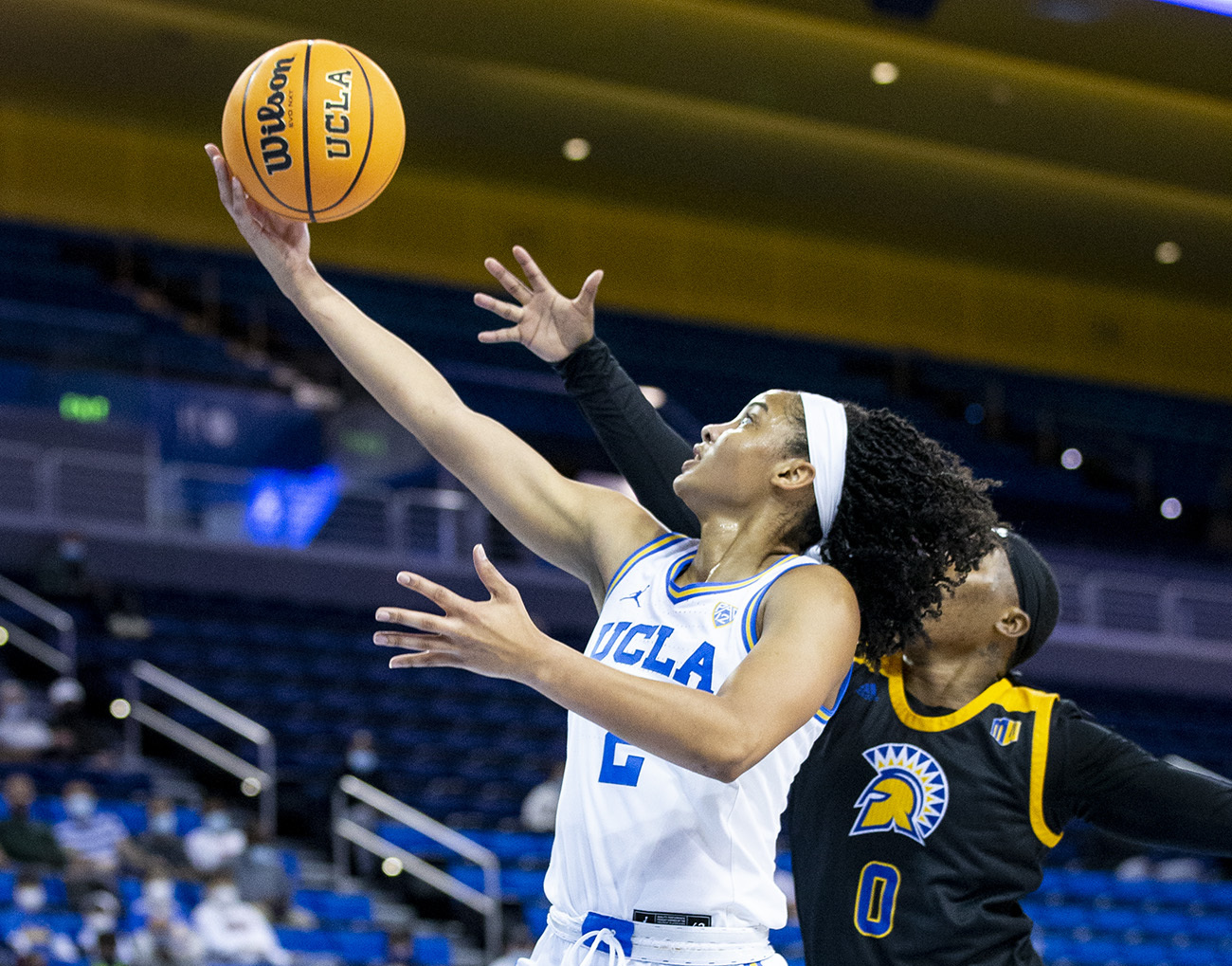