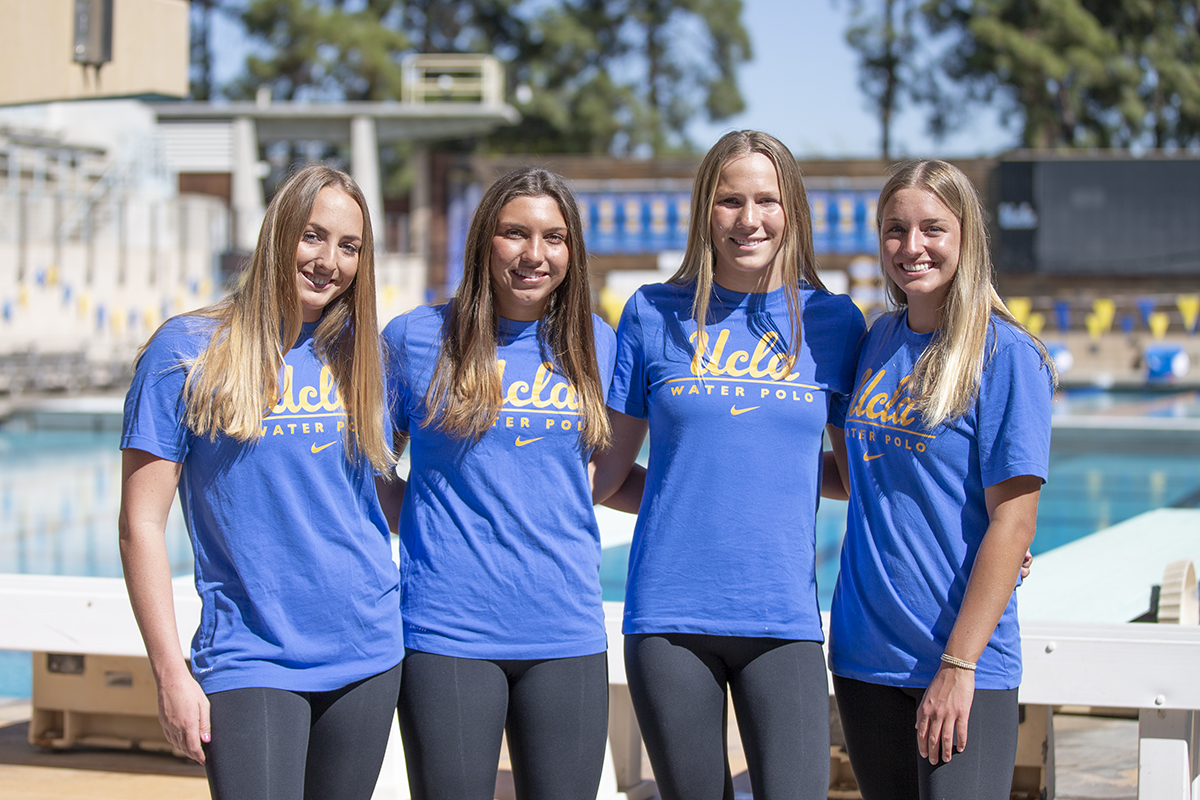 No. 1 UCLA women’s water polo freshmen Grace Myers, Emma Lineback, Nicole Struss and Molly Renner (left to right) pose together in blue and gold attire. The quartet of first-year Bruins have accounted for over 30% of the team’s goals this season. (Ashley Kenney/Photo editor)

The Bruins’ freshmen play a significant role in the team’s national title aspirations, according to coach Adam Wright.

Making up Wright’s smallest recruiting class since taking over as coach of No. 1 UCLA women’s water polo in 2018, Grace Myers, Molly Renner, Emma Lineback and Nicole Struss have already made a considerable impact on the program, combining for over 30% of the team’s goals so far this season.

But playing together in Westwood isn’t the first time the four have shared the pool.

Renner, Lineback and Struss played together at Laguna Beach High School, where they won two California Interscholastic Federation championships. Myers committed from Corona del Mar High School, but the four were not separated by their schools.

As teammates at SET Water Polo Club, the group has spent years getting to know each other inside and out of the pool. The club aims to develop student-athletes with strong work ethics and dynamic attention to detail.

Renner said her relationship with the other three freshmen helped ease her adjustment to Division I water polo.

“I feel like the transition from high school to college is already hard enough – leaving your family, joining a new team and playing with new people,” Renner said. “The transition was just way more smooth with having them by my side.”

Renner has earned MPSF/KAP7 Newcomer of the Week honors twice this season already while Lineback ranks second on the team in goals. Struss has drawn the second most exclusions on the Bruins, and Myers has tallied 11 goals in 17 games.

Since coming to Westwood, the freshmen’s relationship has extended beyond mere teammates.

“We all room together. We’re in a dorm of four,” Myers said. “So obviously, we spend a lot of time together inside and outside of the pool. They’re honestly just my best friends. I couldn’t imagine going to school without them.”

The group’s recruitment to Westwood came under unusual circumstances. With the COVID-19 pandemic altering the normal recruiting methods, Lineback was unable to visit UCLA’s campus before committing.

Instead, they spent a lot of time on phone calls with the team’s staff, such as assistant coach James Robinson. But staff members weren’t the only ones on the recruiting trail.

Renner said redshirt sophomore attacker Alex Peros and junior goalkeeper Quinn Winter – both Laguna Beach High School alumni – influenced her decision to become a Bruin by talking to her about the team’s culture, practices and coaches.

Redshirt senior attacker Maddie Musselman – a Corona del Mar graduate – reached out to Myers to offer some insight into UCLA.

“What I would say to athletes is, ‘You have to picture yourself wherever you’re going to school and you have to make that decision for yourself,’” Musselman said. “I’ve never contacted a person to say, ‘You have to go here.’ I think that gives someone who’s super young a decision to make that’s really open to them.”

The relationship between Musselman and the freshmen didn’t stop once they arrived on campus. Musselman said while she’s grown with them as players, the most memorable moments have been outside of Spieker Aquatics Center – more specifically, in her van.

“I’ve taken a lot of special time to connect with them in the water, and I actually drove all four of them (to the Triton Invitational),” Musselman said. “They’ve taken it to a whole new level with the commitment they have to the group. We need them. I hope they realize how much of an impact they can have on this team.”

Struss – the CIF Southern Section Division 1 Player of the Year at Laguna Beach in 2020 – said the Bruins’ culture was the deciding factor in her decision.

“I wanted to be a part of something that was bigger than myself,” Struss said. “The program has grown a lot, and I know that they are always trying to do whatever they can to create a good culture.”

The group had offers from other top universities such as Stanford, California and Harvard. As the season has gone on, Renner said she’s heard from freshmen at other schools across the country about divided locker rooms.

“I’ve been talking to other freshmen from other schools, and I asked them what their culture is like,” Renner said. “Sometimes there’s cliques on teams. But when I came to UCLA, everybody welcomed me with open arms. I felt like I fit right in.”

The team’s culture – starting with Wright – emphasizes no one person being more important than the next in addition to approaching every game and opportunity the same, according to Musselman.

“We have a lot of chemistry here,” Myers said. “I think it really helps when you’re close to your teammates, and we’re all really close. As a team, we hang out all the time, do dinners, talk, and a lot of the players are really good mentors.”

Even with the experiences and friendships the four have already gained, Wright said this season is just the start for what’s to come.

“They’re doing a great job,” Wright said. “The reality is, they all are going to have big roles not only within this season, but going forward over the next four years.” 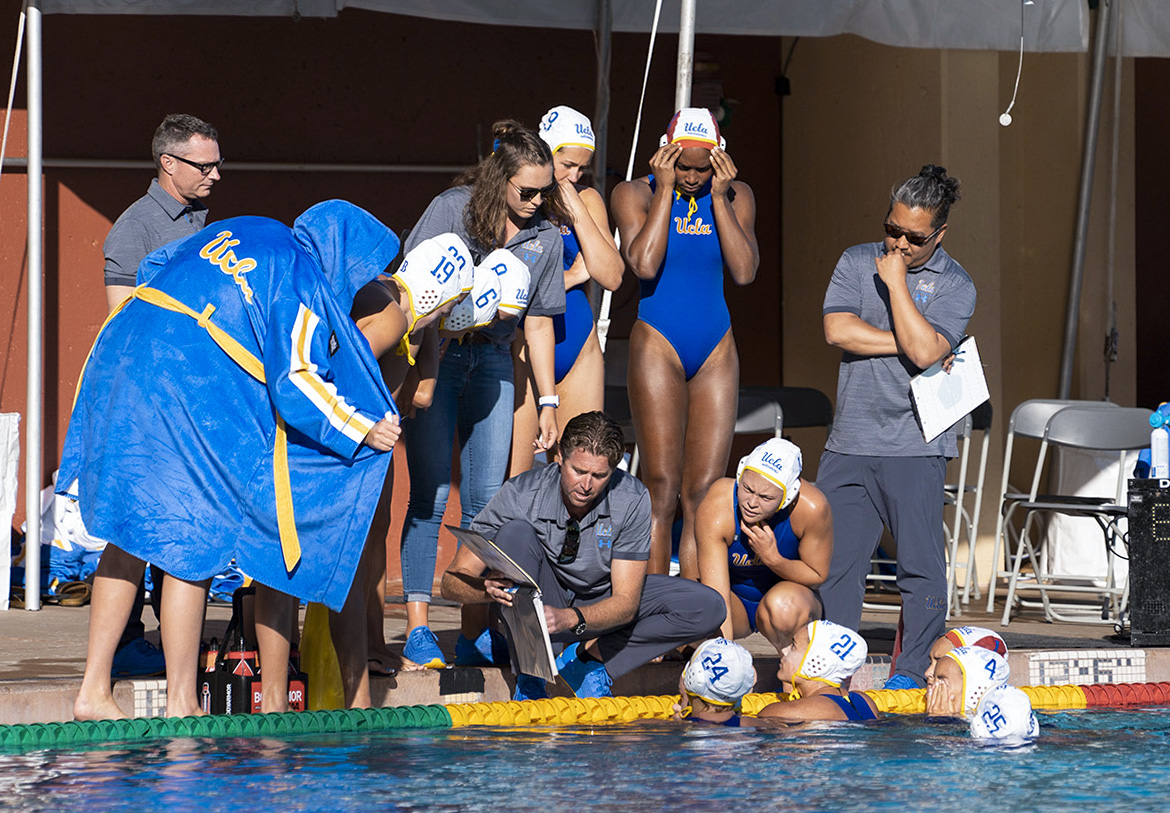 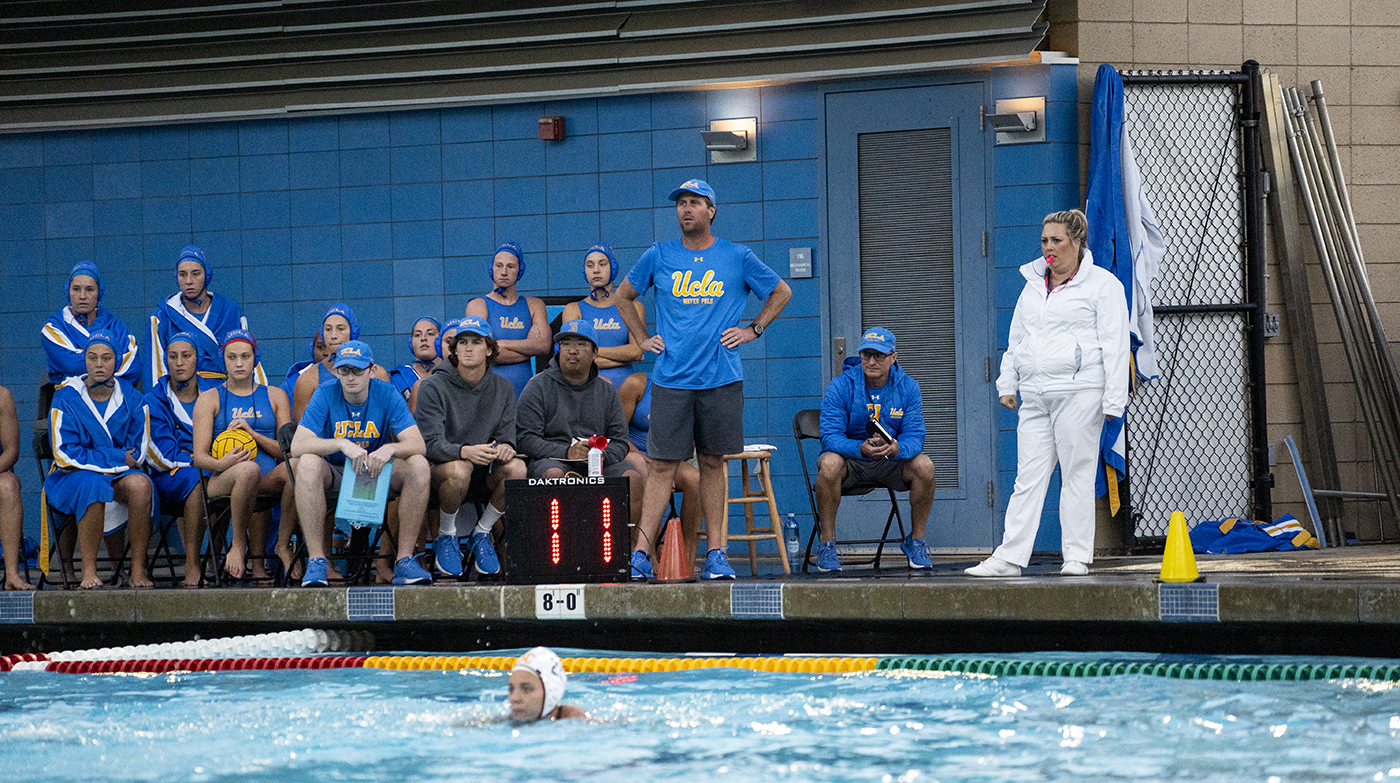 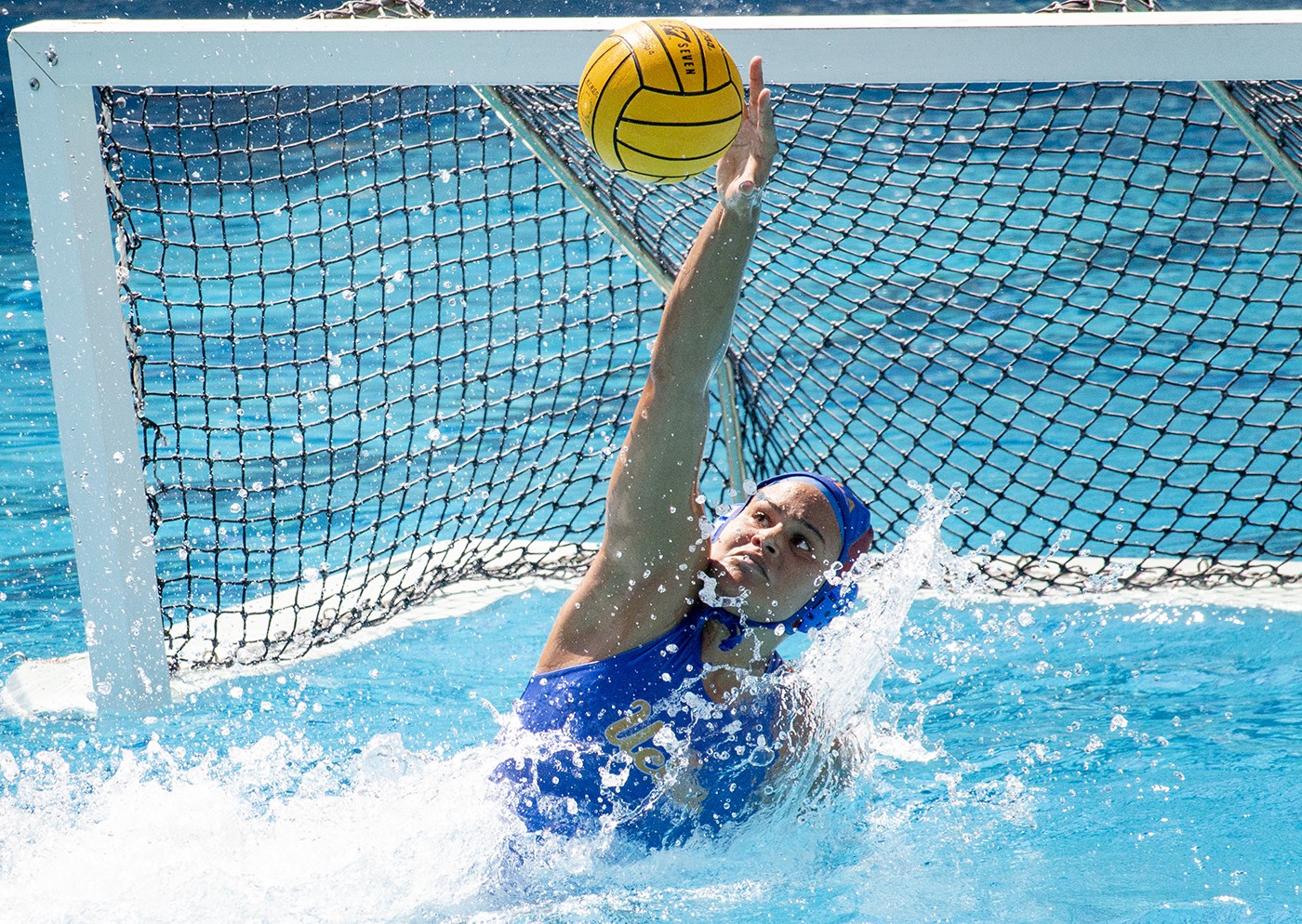 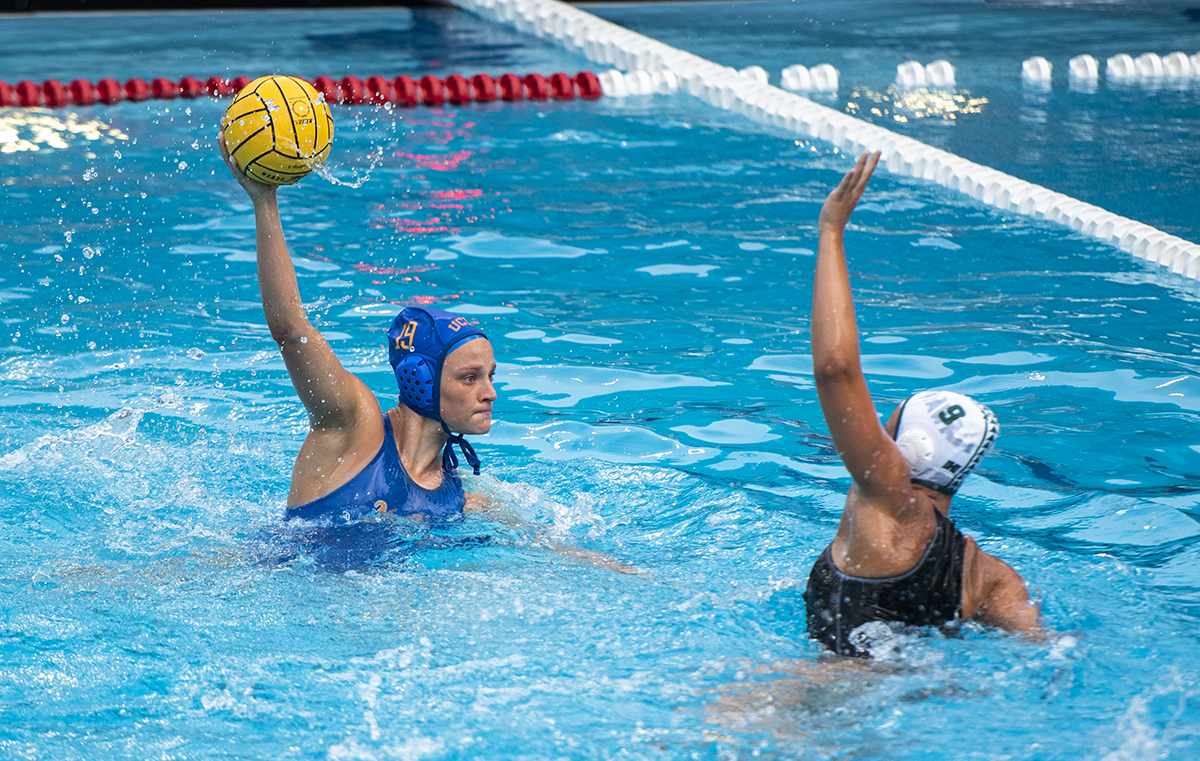