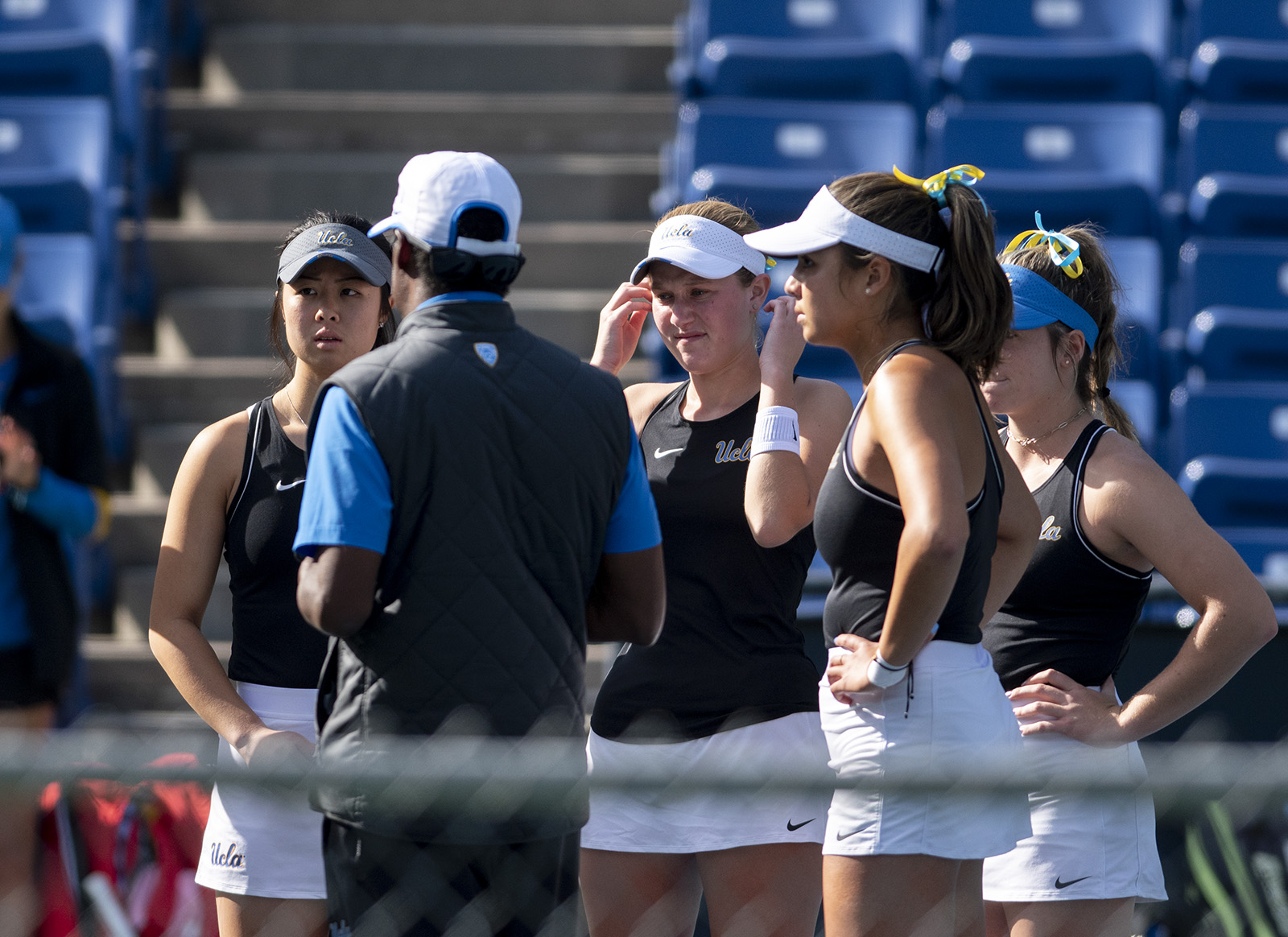 Members of UCLA women’s tennis stand on the court during the team’s match against Loyola Marymount on Wednesday. The Bruins picked up a loss in their first dual match of the season for the first time in at least 20 years against the Lions. (Marc-Anthony Rosas/Daily Bruin)

Just over 30 minutes into the match, the Bruins had secured the doubles point and were en route to their first win of the season.

Then, the home team found itself with only one first-set victory among six singles matches.

And nearly 2 1/2 hours after the blue and gold’s doubles-point triumph, junior Sasha Vagramov fell in straight sets, securing victory for the visiting Lions.

“They came out hot,” said junior Abbey Forbes. “They had absolutely nothing to lose playing this. They were coming out swinging, very freely. I think that we came out a little tight.”

In a match that lasted nearly 3 1/2 hours, No. 4 UCLA women’s tennis (0-1) fell to Loyola Marymount (2-1) by a score of 4-3 at the Los Angeles Tennis Center, starting out its campaign with a loss for the first time this century. In the Wednesday afternoon match, the Bruins secured the doubles point by taking wins on all three courts before seeing their 1-0 advantage turn into a 4-1 score in favor of the Lions.

“This is a great learning opportunity for our freshmen, for me, for our entire team. I just want to take every single possible thing that I can learn from this and move forward throughout the season with that same energy,” Forbes said.

Opening up doubles for UCLA was Forbes paired with freshman Ava Catanzarite, who picked up a 6-1 win on court two in under half an hour against their LMU opponents.

Senior Elysia Bolton and freshman Elise Wagle clinched the doubles point for the Bruins minutes after Forbes and Catanzarite’s win, notching a 6-2 victory over the Lions’ No. 18 pair Wiktoria Rutkowska and Isabella Tcherkes-Zade.

With the doubles point already in hand, UCLA’s court three pairing of Vagramov and junior Caroline Goldberg played out their match to the tune of a 7-6 (5) tiebreaker victory. The win was Goldberg’s first career dual-match victory.

“I’m so excited for Caroline,” Bolton said. “I wanted her to win that so badly, so it was great to see her finally get to play and get a match under her belt and win a match.”

But just after UCLA had swept its doubles matches, it dropped 5-of-6 first sets in singles play. Only No. 68 Forbes claimed a first-set victory, a 7-5 decision over Eva Marie Voracek.

The Bruins sent two freshmen, Wagle and Catanzarite, into the lineup with Goldberg.

The trio, playing on courts four, five and six, all competed in their first collegiate singles matches Wednesday and all picked up losses. Following Goldberg, Catanzarite logged a 6-3, 7-5 defeat on court five while Wagle also endured a loss by the same score on court four.

“(The) first time you put UCLA on your chest and have to play for UCLA – it’s a much bigger thing,” said associate head coach Rance Brown. “We had three young players go through a learning process out there today. It didn’t work out in our way, but they saw what a dual match is. It’s not always just, ‘Am I better than player X?’ It’s a lot of emotions in handling and playing for five or six other girls on your team.”

Down 3-1, it was up to the front courts to pull out a victory for the Bruins. No. 49 Vagramov started her first set up 4-1 but ended up dropping the frame 7-6 (6). In the second set, the junior found herself in a 4-2 hole she could not climb out of and fell in straight sets to No. 123 Rutkowska, handing the win to the Lions.

Although both Bolton and Forbes picked up singles victories, the damage had already been done, and UCLA picked up its first-ever loss to Loyola Marymount.

“We all can learn from this,” Bolton said. “We know that we’re still one of the country’s top schools. We can beat anyone, so we just have to take this loss on the chin and just move forward and look forward to the weekend and then every week after that.” 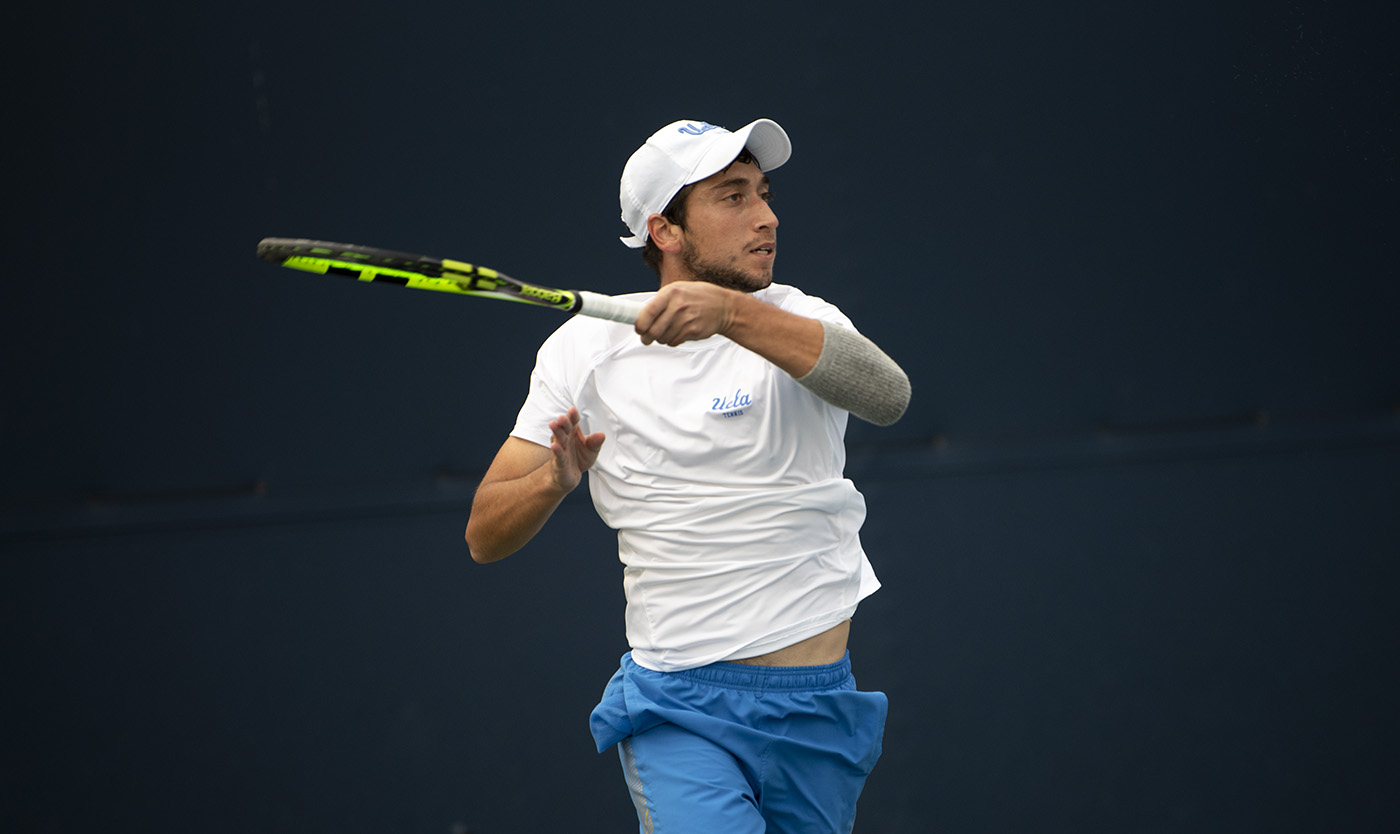