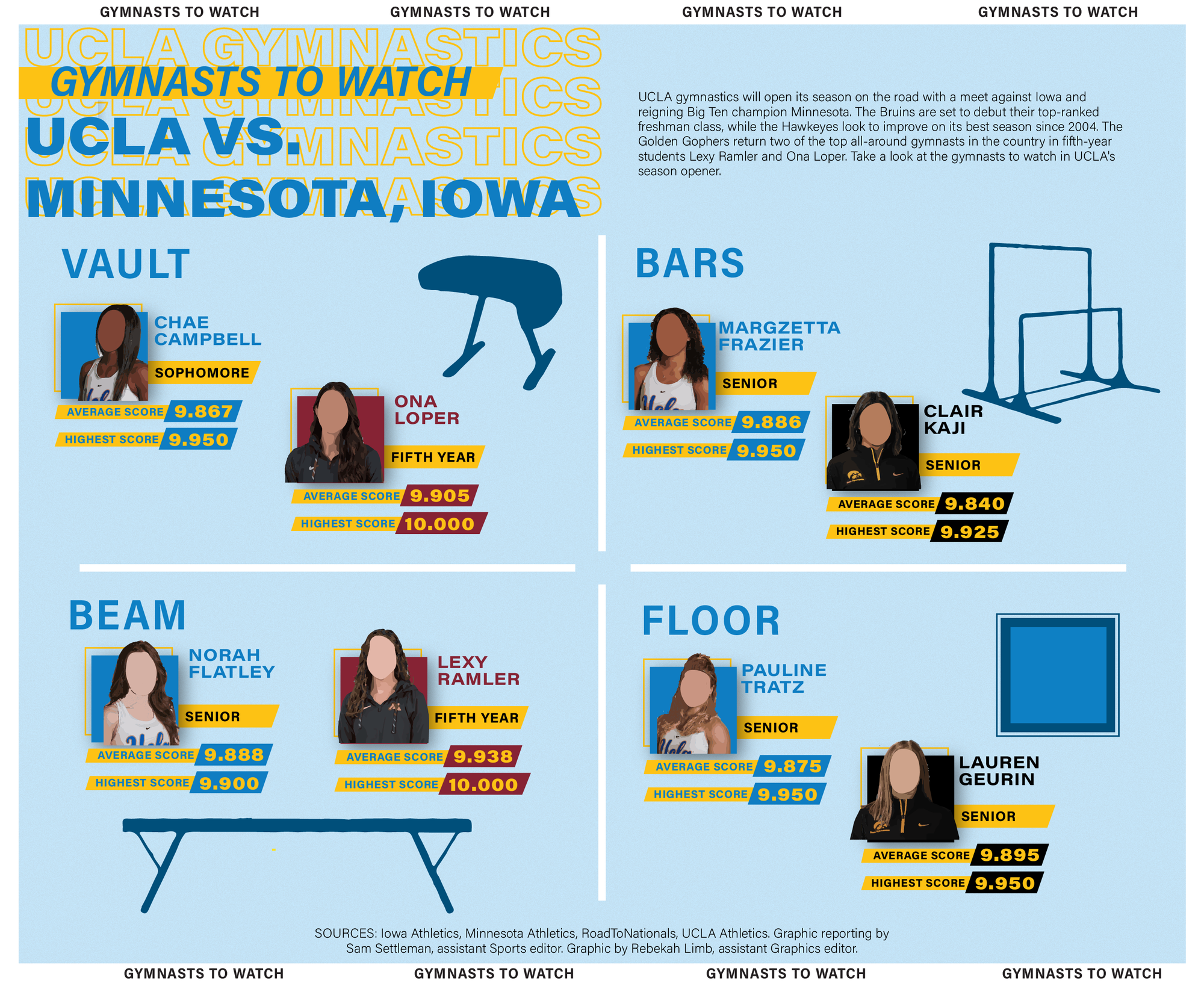 UCLA gymnastics will open its season with a tri-meet against Minnesota and No. 9 Iowa (2-0) on Monday. The Bruins and Golden Gophers were set for their first dual meet against each other since 2004, but the Hawkeyes joined the competition Friday because of a COVID-19-related cancellation. Here is this week’s scouting report from assistant Sports editor Sam Settleman – who is glad he gets to watch gymnastics Monday instead of his 11 a.m. lecture.

Prior to this season, coach Chris Waller said he wanted so much depth on his team that it would take six hours to determine a lineup.

It looks like that’s exactly what UCLA has this season.

A year ago, the Bruins were left searching for reliable routines on beam and regularly trotted out just five competitors on vault. This season, conversely, UCLA boasts a wealth of options on all four events, with the Bruins’ depth bolstered primarily by a star-studded freshman class.

Five UCLA freshmen are poised to make an instant impact, and that’s not even including freshman Emily Lee, who is eyeing a February return on bars and beam after tearing her Achilles tendon just seven months ago.

Freshman Jordan Chiles could bring her double-twisting Yurchenko vault to college after proving herself as one of the most consistent vaulters on the elite gymnastics stage. Freshman Brooklyn Moors also brings a 10.0 start value on the event with her handspring front pike 1/2. Even with senior Sekai Wright and her Yurchenko 1.5 likely sidelined to begin the season, the Bruins will have plenty of 10.0 start values on vault.

With the talent this freshman class is set to bring on all four events, perhaps its most important contribution will be on beam, where the Bruins ranked a meager 19th in the nation a season ago. Chiles and Malabuyo could both be standouts on the event, with freshmen Ana Padurariu’s strong pedigree on beam set to stabilize UCLA’s biggest blemish.

What to do when there's no gymnastics this weekend? Just watch Chae Campbell's @pac12-winning floor routine on repeat! 🤩 @chae_2001 pic.twitter.com/mlYREeeI3x

Campbell’s all-around capabilities make her perhaps the most important piece on this team and will put her in contention to be one of the top gymnasts in the conference. Fellow sophomores Frida Esparza and Sara Ulias are also capable of putting up big numbers, with the latter upgrading to a double layout dismount on bars this offseason after breaking out on the event in her freshman campaign.

The group of upperclassmen is led by fifth-year seniors Pauline Tratz and Kendal Poston, two of the most consistent gymnasts on the Bruins’ roster. Tratz figures to be a strong leadoff on both vault and floor, while Poston could lead off on beam for the second straight year and also provides a 10.0 start value on vault.

Meanwhile, senior Margzetta Frazier should once again be one of the top bars performers in the country, and her floor routine will have strong potential to go viral again. Senior Norah Flatley, one of UCLA’s top beam workers, is also back in the fold and will be at full strength after missing much of last season because of injury.

Behind a freshman class that could go down as one of the all-time greats – reminiscent of the Bruins’ 2020 senior class – and a strong core of upperclassmen, UCLA is poised to have a much-improved year.

That being said, don’t expect that to be evident right out of the gates. The Bruins will likely score around the 197 range or slightly below in their season opener, leaving plenty of room for growth over the course of the season.

The Golden Gophers came in one spot behind the Bruins in the preseason poll.

But with its top two gymnasts opting to return for a fifth season after an NCAA semifinals appearance a season ago, there is certainly an argument to be made that Minnesota is the best team in this meet.

The Golden Gophers eclipsed the 197 mark in seven of their last eight meets to close out the 2021 season, largely behind the all-around performances of current fifth-year students Lexy Ramler and Ona Loper, who asserted themselves as two of the top gymnasts in the country.

Ramler competed on every event in each of the Golden Gophers’ 13 meets and hit all 52 of her routines in 2021 en route to a tie for the No. 2 ranking in the country in the all around, holding the top average all-around score of any gymnast in the nation. The 2021 Big Ten Gymnast of the Year excels on beam, where she finished tied atop the rankings a season ago. Ramier also finished top five in the country on vault – where she earned a perfect 10 on her Yurchenko 1.5 – and bars.

While Ramler reached perfection once with her Yurchenko 1.5 last year, Loper did it twice in 2021. The current super senior ranked tied for third in the country on vault a season ago, including a perfect 10 at the NCAA regionals.

While Minnesota did not excel on floor as a team, sophomore Mya Hooten earned a name for herself in her freshman season by becoming an All-American on floor and picking up First Team All-Big Ten honors. Hooten tied for fourth in the nation on the event, posting a score under 9.900 just twice in 13 tries and also earning the first perfect 10 on floor in program history.

If Ramler and Loper are at their best, UCLA will have its work cut out to take home first place in this competition. But going head-to-head against one of the top teams in the nation will be a beneficial early-season test for this young Bruin squad.

The latest addition to this meet, the Hawkeyes are coming off their best season since 2004.

Iowa ranked No. 17 in the country and put up a 197.050 in the NCAA regionals – the second-best score in program history.

Iowa has a strong group of upperclassmen featuring seniors Clair Kaji and Lauren Guerin and junior JerQuavia Henderson, but the development of sophomore Adeline Kenlin will be interesting to watch as the Hawkeyes strive to build on a successful 2021 season.

Kenlin competed primarily on vault, bars and beam for most of her freshman year but became an all-around gymnast for Iowa late in the season, posting a 39.500 in her all-around debut, including a 9.975 on beam.

With the all-around experience under her belt, Kenlin will likely compete on all four events for the Hawkeyes for much of 2022, as she has done in each of the team’s first two meets. On a team with few all-around gymnasts, Kenlin’s ability to regularly tally scores above 39 in the all around will be crucial.

But Iowa also has plenty of veteran depth that starts with Kaji. In her sixth year with the program, Kaji has proven to be one of the team’s most reliable gymnasts, posting 30 scores of 9.800 or better across bars, beam and floor in 2021. While she has yet to compete on floor this season, she has already posted a 9.900 on beam twice.

The Hawkeyes stand out on floor, where they ranked tied for fourth in the country a year ago. Iowa’s floor party is headlined by Guerin, who tied for eighth in the nation individually on the event and scored a 9.900 or better on nine of her 11 floor routines.

Iowa certainly has talent, but with UCLA and Minnesota in the building and the Hawkeyes coming off short rest, they might be outmatched Monday. 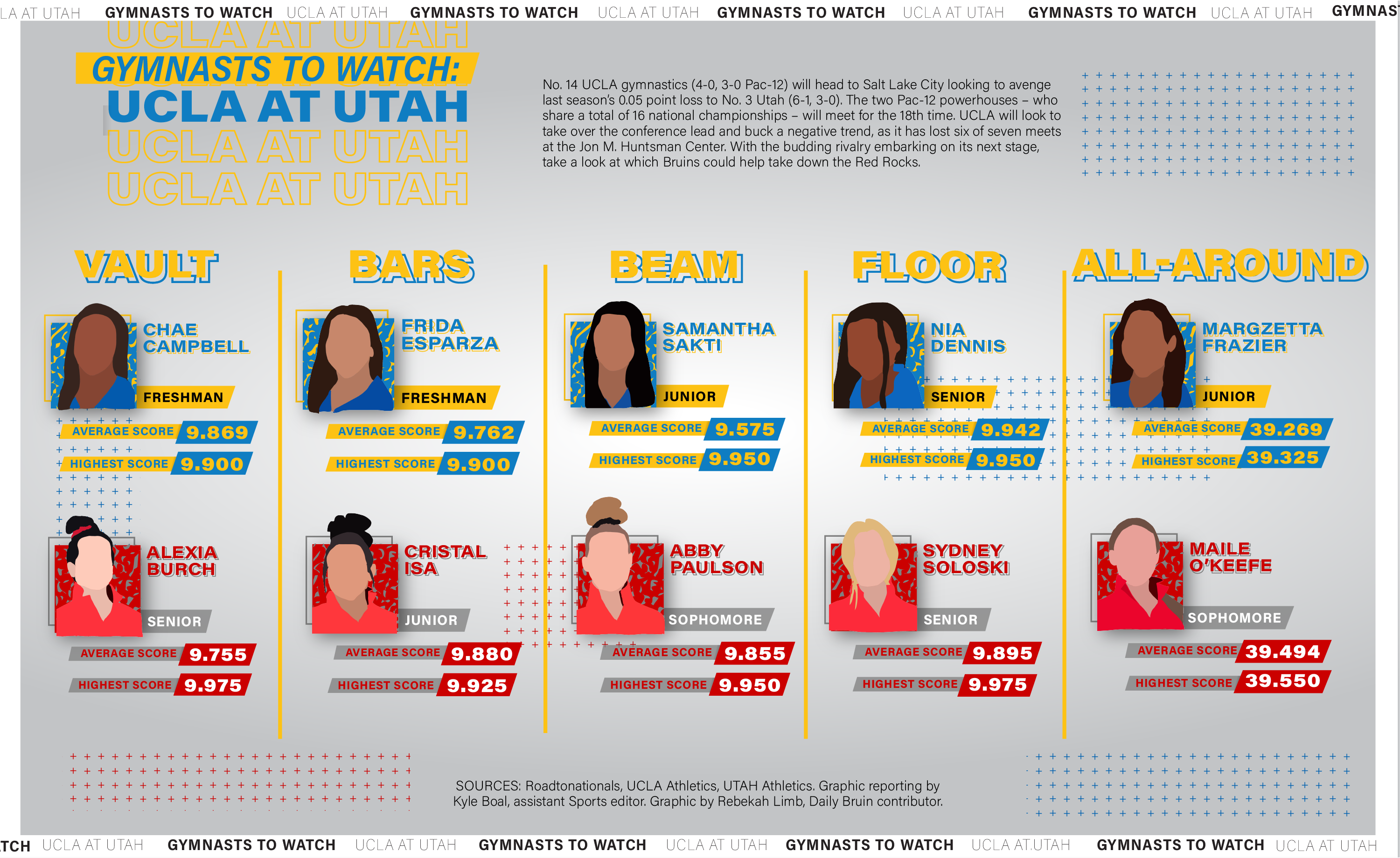 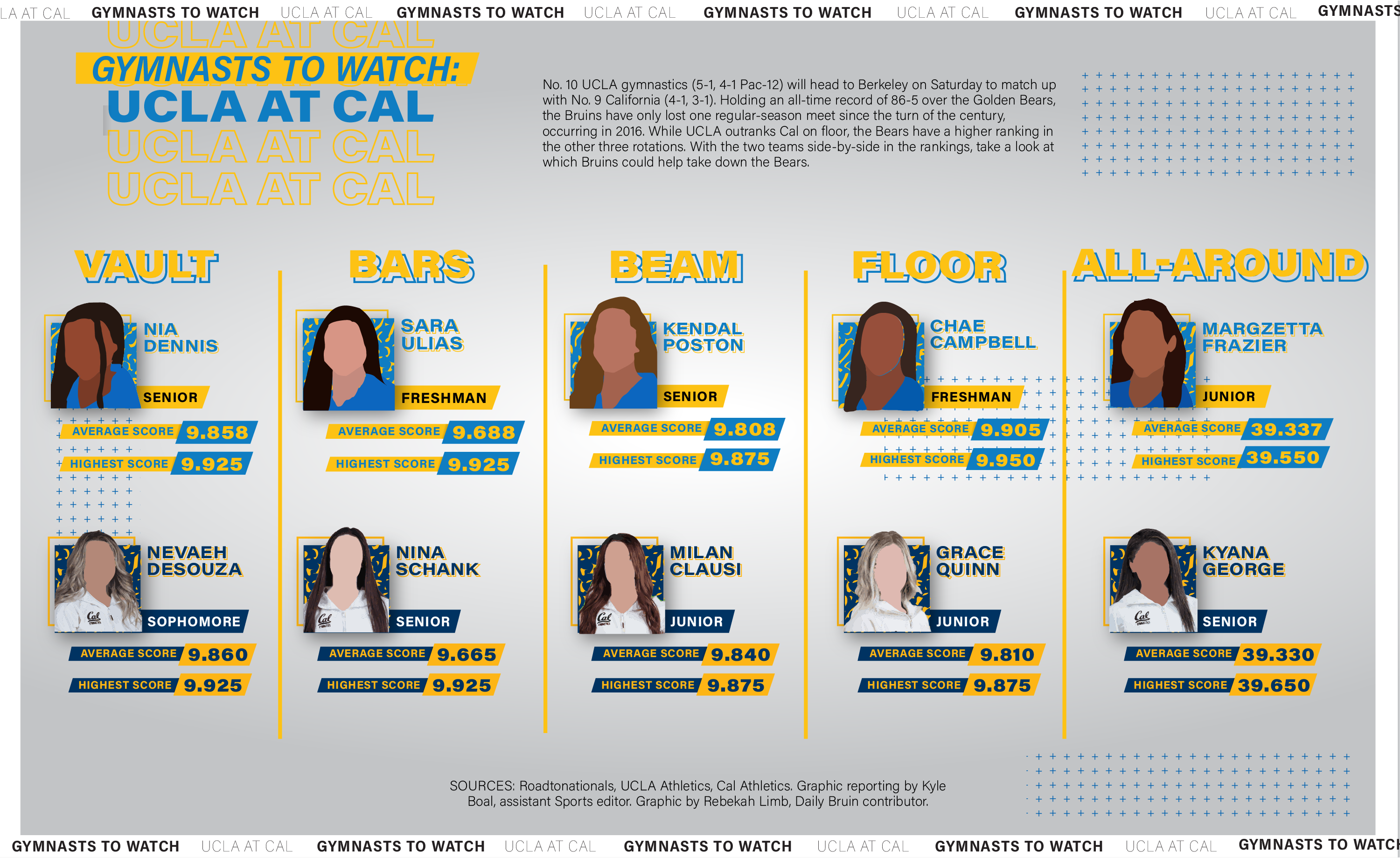 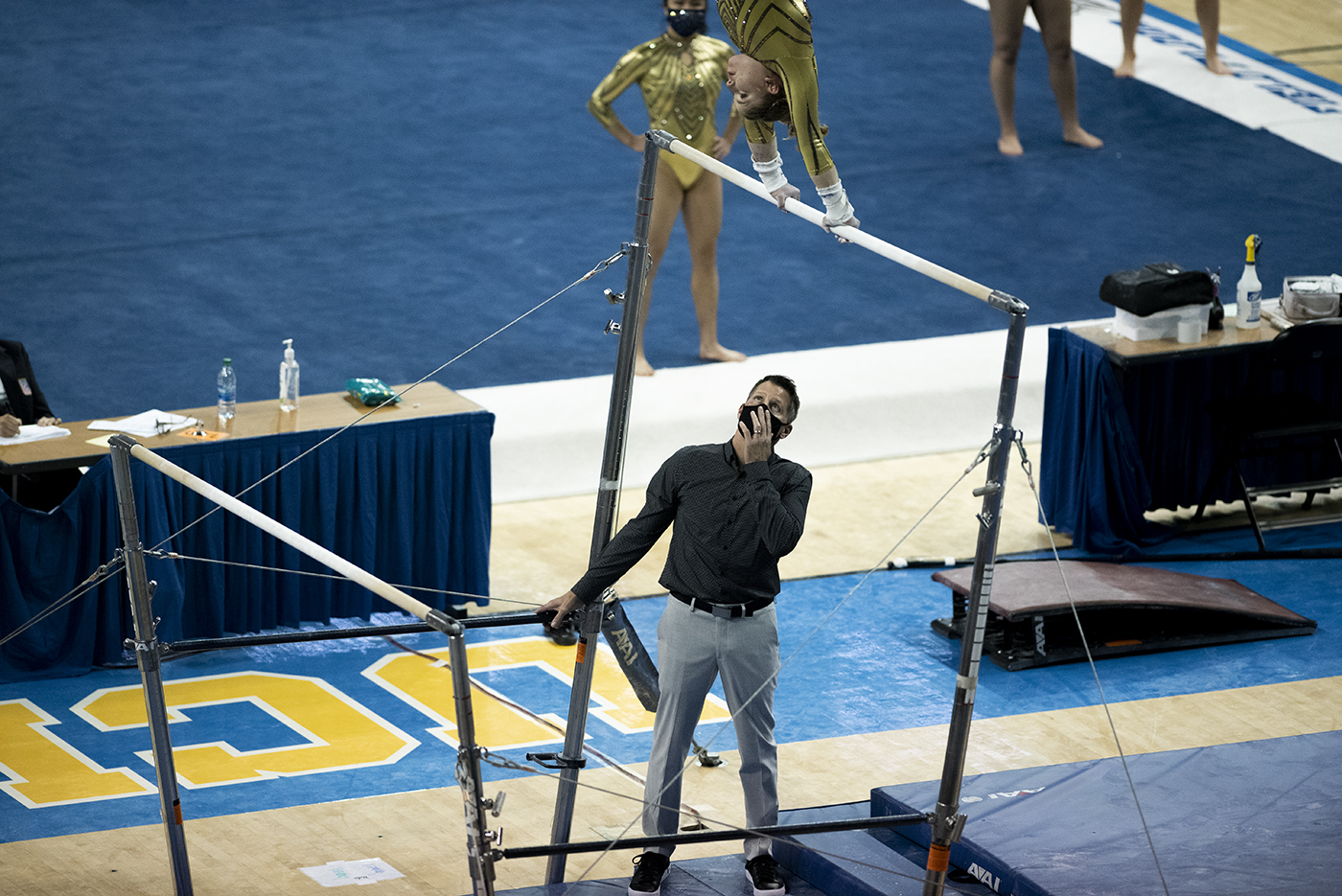