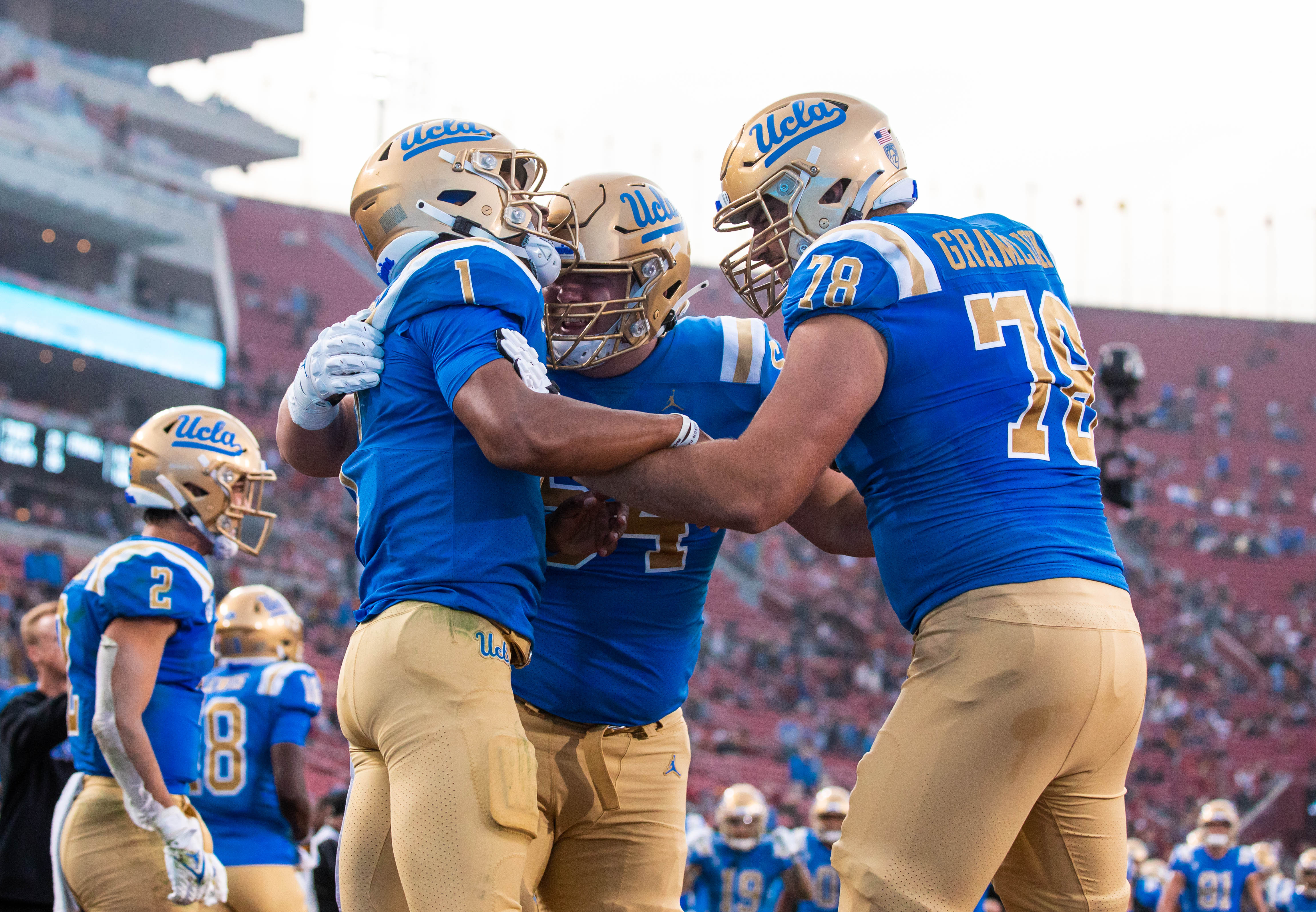 Members of UCLA football celebrate a touchdown from senior quarterback Dorian Thompson-Robinson in the team’s win over USC on Saturday. The victory marked the Bruins’ first win at Los Angeles Memorial Coliseum since 2013. (Ashley Kenney/Photo editor)

UCLA football (7-4, 5-3 Pac-12) defeated crosstown rival USC (4-6, 3-5) by a score of 62-33 on Saturday, giving the Bruins their first road win over the Trojans since 2013. After a back-and-forth first quarter, the blue and gold took control, outscoring the home team 55-23 the rest of the way. Here are the five main takeaways from UCLA’s rivalry win over USC.

Midway through the third quarter, I whispered something to my colleague next to me.

“Would this be the worst loss in program history if UCLA chokes here?”

At that point, the Bruins were winning 35-20, about to be 35-26 after a two-play touchdown drive from the Trojans. But given the program’s history against the Trojans and their late-game track record in recent years, blowing a double-digit second-half lead to their crosstown rivals was not out of the realm of possibilities.

But something about this team is different from the rosters of years past – and this win proves that.

Not only did UCLA hold on to win the game, but it also extended its lead by 20 points by the final whistle, setting a record for the most points scored by the blue and gold in the history of the rivalry. The 29-point margin of victory also gave the team its biggest win over USC since 1954.

To put the triumph into context, the Bruins had lost five of their last six meetings with the Trojans, putting them at an all-time 17-win disadvantage against their rivals entering Saturday. USC – a program defined by success on the football field – had dominated the matchup since its inception.

This win potentially changes that.

Not only does this punctuate opposite seasons for the two respective schools, but it could also mark a shift in the tide of the rivalry for the foreseeable future.


Dorian Thompson-Robinson has, for better or worse, attempted to hurdle a defender in nearly every game this season.

Entering Saturday, the senior quarterback has largely been unsuccessful in achieving that feat. The signal-caller had also been in the middle of a mediocre season, never once reaching the 300-yard mark in passing or eclipsing four touchdowns in a game.

But in a near-perfect afternoon Saturday, Thompson-Robinson achieved all of those feats, having saved his best for USC yet again.

The senior quarterback threw for a season-high 349 yards and four touchdowns in his third career game against the Trojans as the starter, with his 247.8 passer rating being the highest of his career. Thompson-Robinson was also effective on the ground, running for 46 yards and two scores.

The passing total was his fourth-highest mark in his four years in Westwood, with three of his four best passing games coming against USC. In his three starts against the Trojans, Thompson-Robinson has gained over 1,200 yards and has scored 14 touchdowns.

His first two pass attempts Saturday were interceptions, but the quarterback quickly recovered. After two more incompletions, Thompson-Robinson went 16-of-18 through the air the rest of the game, with completions on his last 14 pass attempts.

Thirteen of his 16 completed passes went for 10 or more yards while eight went for at least 20. A few of the balls were some of his best of the season – particularly the two bombs to redshirt junior running back Kazmeir Allen and the 37-yard strike to redshirt junior tight end Greg Dulcich.

Even after the initial struggles, Thompson-Robinson remained poised and delivered arguably his best performance as a Bruin. Better yet, he gave a memorable snapshot that encapsulated his stellar play: his leap into the endzone.

Not only did Thompson-Robinson get over the Trojan defender, but he also leaped over the hump of what otherwise can be described as a mediocre season.

Chip saves his job – for now


Entering this week, Chip Kelly was facing an ultimatum: win, or get fired.

With his best performance of the season, the fourth-year coach picked the former.

Kelly’s offense scored 62 points Saturday – the most it has scored against any opponent since putting up 67 in the barnburner against Washington State in 2019.

The coach’s play-calling was among his strongest work of the season, as the Bruins accumulated over 600 yards of total offense – a mark that was split fairly evenly among passing and rushing yards. Thompson-Robinson got the spotlight, but UCLA’s 260 rushing yards were its second most in a game this season.

Kelly identified his opponent’s weakness – the secondary – and delivered punch after punch, knowing precisely when to throw the ball over the top after staying disciplined with the running game for the majority of the game.

Despite outgaining and outscoring the Trojans, the Bruins held the ball more than five minutes less than their opponent – a sign that Kelly’s quick-strike offense was firing on all cylinders.

Above all else, it was exactly the performance Kelly needed to keep his job for at least one more year.

An ovation to Kazmeir Allen


The story of this game cannot be written without mentioning the efforts of Kazmeir Allen.

His first touchdown came at a crucial point for UCLA, as the Bruins trailed early and possessed the ball at their own 6-yard line. A completion to Dulcich went for 37 yards to give the blue and gold some breathing room before Thompson-Robinson connected with Allen over the middle for 45 yards and a touchdown.

In a similar play in the second quarter, the hybrid running back/wide receiver burnt the Trojan defense again, with Thompson-Robinson once more finding Allen deep over the middle, this one going for 58 yards and another score.

As a receiver, Allen was exactly the missing piece to exploit this Trojan secondary. None of UCLA’s wide receivers have the necessary breakaway speed to stretch a defense out down the field.

For good measure, Allen also ran back his first career kick return for a touchdown, going untouched as he darted around 11 USC defenders, putting the cherry on top of his career day.

This is the kind of speed UCLA has needed from its skill position unit all year, and Allen specifically showed how lethal this offense can be with quickness out wide.


Ethan Fernea has been in the UCLA football program for six years.

The redshirt senior running back has been through two coaching staffs, 40 defeats and five losing seasons since walking onto the team in 2016.

Amid the sustained string of losses to start his Bruin career, Fernea sustained more hardship to start the season: injuring his right wrist in the team’s defeat against Fresno State. It could’ve marked the end of his football career.

However, the sixth-year special teams standout grinded his way back onto the field. Donning a club on his right hand, Fernea missed just one game for the Bruins this season.

So when Fernea’s 42-yard touchdown run late in the fourth quarter sealed UCLA’s biggest win of the year – and a winning season for the Bruins for the first time since 2015 – it was almost poetic. Fernea’s running into the Trojan endzone in his sixth and final matchup against USC, club cast and all, encapsulated the very best of sports.

After the game, Kelly agreed.

“He’s given everything to this football program – everything you want in a Bruin football student-athlete is Ethan,” Kelly said. “To finish it off that way for that kid was just awesome. He’s a special, special young man.” 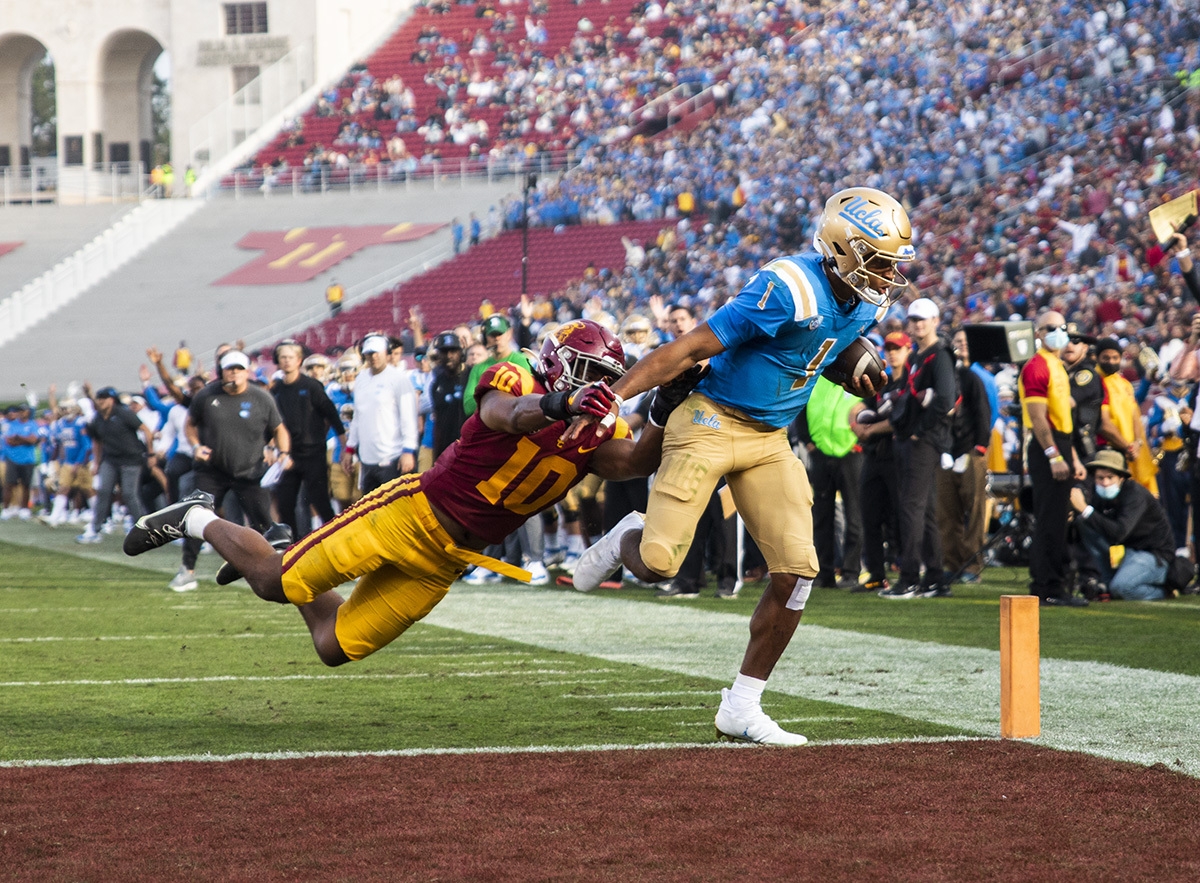 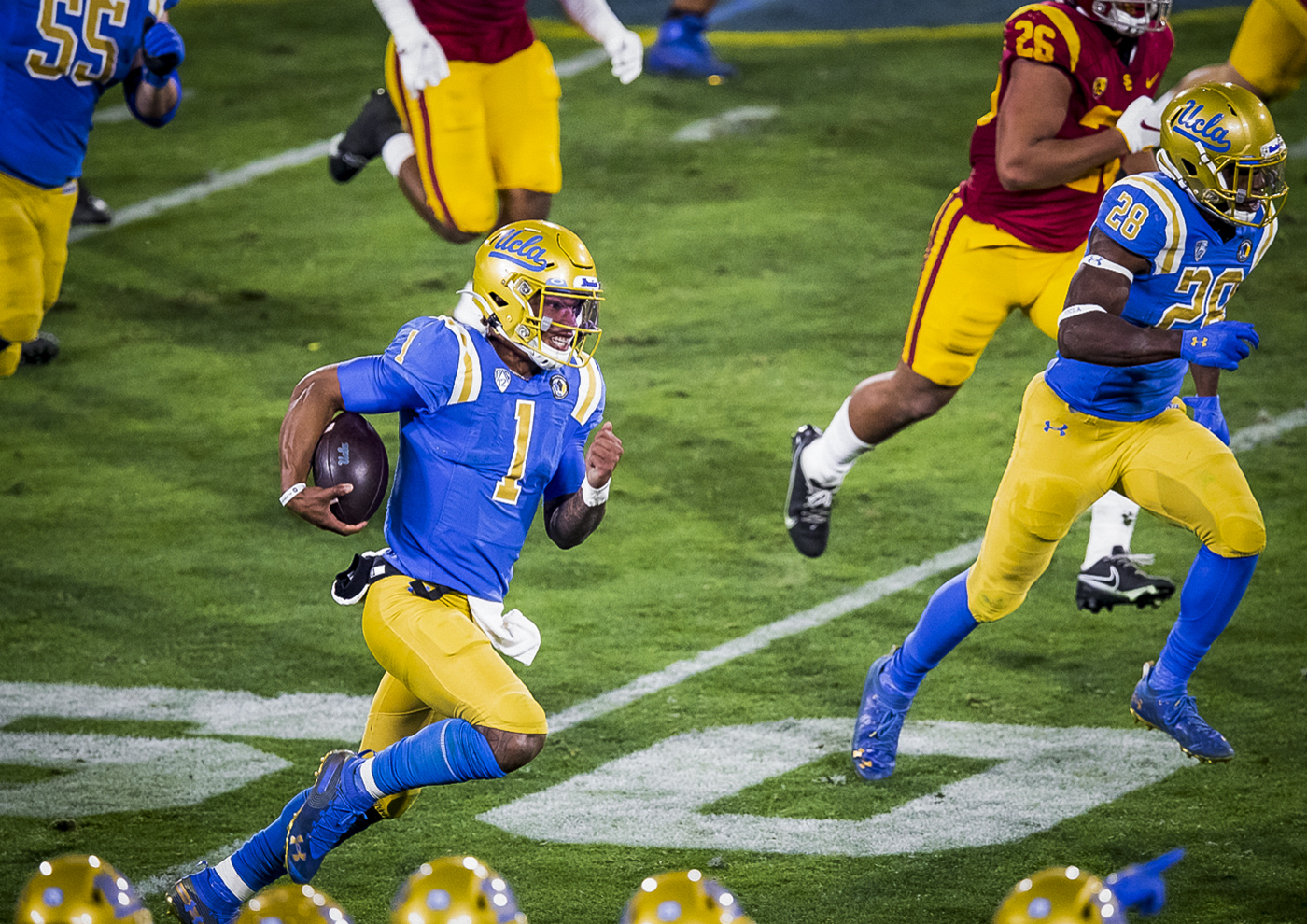