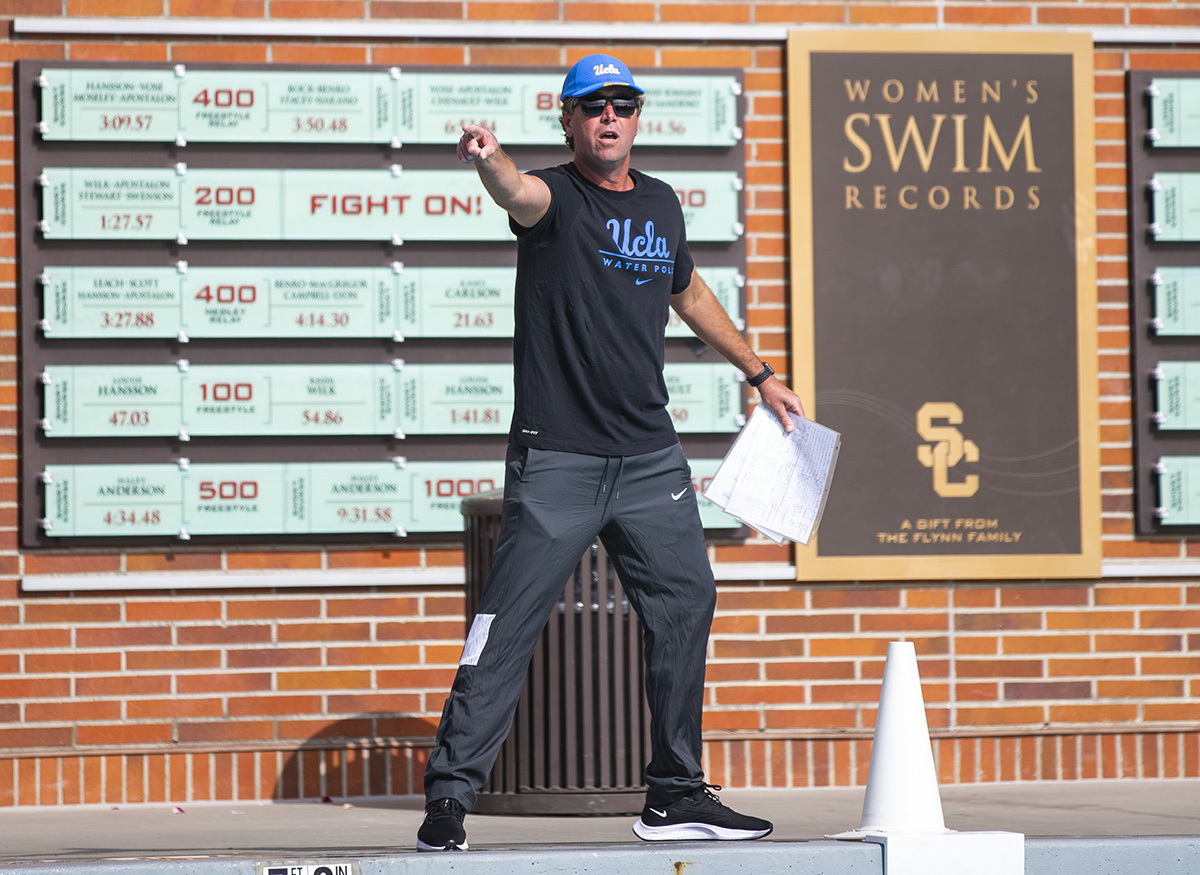 Coach Adam Wright argues with a referee. Wright was ejected late in the fourth quarter of No. 1 UCLA men’s water polo’s loss to No. 2 USC on Saturday. (Ashley Kenney/Photo editor)

With the Bruins down one goal with over a minute to play, coach Adam Wright was asked to leave the game.

The four-time national championship-winning coach earned a red card after receiving a yellow-red card earlier in the match.

With Wright ejected, No. 1 UCLA men’s water polo (16-2, 1-1 MPSF) couldn’t find an equalizer and ultimately fell 8-7 to No. 2 USC (16-1, 2-1) in a back-and-forth contest at Uytengsu Aquatics Center for the Trojans’ Senior Day on Saturday. Wright and associate head coach Jason Falitz declined a request for comment.

“(Wright is) going to fight for us to the end and he always has our back no matter what,” said redshirt sophomore attacker Jack Larsen. “We can’t really control what the refs do, but it was just cool to see him have our backs like that.”

In a one-on-one power-play opportunity in transition, graduate student attacker Chasen Travisano gave UCLA its first lead of the game at 4-3, sneaking the ball under USC goalkeeper Nic Porter’s arm into the bottom right corner of the goal. The Trojans responded with a goal of their own to knot the contest at four midway through the third quarter.

With under three minutes to play in the third period, Wright earned a yellow-red card, marching toward the referee to protest a call before calling for a timeout. Sophomore attacker Makoto Kenney netted the Bruins’ other six-on-five goal of the game following the break to take a 5-4 lead, scoring from center pool. UCLA finished 2-of-9 on power plays in the contest.

Kenney, who led all scorers with a hat trick on perfect scoring, said the USC crowd added extra intensity to the game.

“A good crowd is always fun,” Kenney said. “It’s been over a year since we’ve had a big crowd, so it was fun.”

Finishing the quarter 4-of-6 from the pool, USC scored back-to-back goals with a penalty shot followed by another score with two seconds to go in the third quarter to retake the lead heading into the final stanza.

Early in the fourth quarter, graduate student attacker Nicolas Saveljic scored his only goal of the contest on a penalty shot into the upper-right corner of the goal. USC coach Marko Vavic was awarded a yellow-red card shortly prior to the play. The Trojans responded with a goal of their own 20 seconds later to take a lead they would not relinquish.

Junior goalkeeper Bernardo Maurizi earned two of his four saves in the game in the final three minutes, but former UCLA attacker-turned-USC transfer Ashworth Molthen hit the dagger to give the Trojans the first two-goal lead of the afternoon with less than 30 seconds to play.

“It was a good game, there were a lot of improvements,” Maurizi said. “We just need to improve six-on-five, five-on-six. But during the frontcourt, I felt the guys did a really great defense. I’m really proud of them.”

The Bruins finished the contest 7-of-28 from the pool while the Trojans managed to convert on 8-of-19 attempts. Kenney scored a goal with two seconds remaining in the fourth to bring UCLA within one, but it was too little, too late.

While Larsen said his team tried to block out the noise as best as possible, the USC crowd sang “Na Na Hey Hey Kiss Him Goodbye” with the game out of reach.

“You try to block it out for the most part and not let it affect how you play,” Larsen said. “But at the same time, it’s right there. You feel the energy, the crowd, the band.”

Each team finished with five individual scorers. The Trojans out-stole the Bruins 9-5 in the contest.

The teams split one goal apiece in the first and second quarters to enter halftime tied 2-2 before combining for 11 goals in the second half. Larsen assisted on both first-half UCLA goals.

“I thought we had a really solid effort, we played really consistent the whole game,” Larsen said. “There are a lot of things out of our control, we try to control the controllable and there were a lot of external factors, but we just tried to stick to our game plan and stay consistent.”

UCLA will have the week off before heading to Berkeley for a showdown with California to wrap up its regular season. 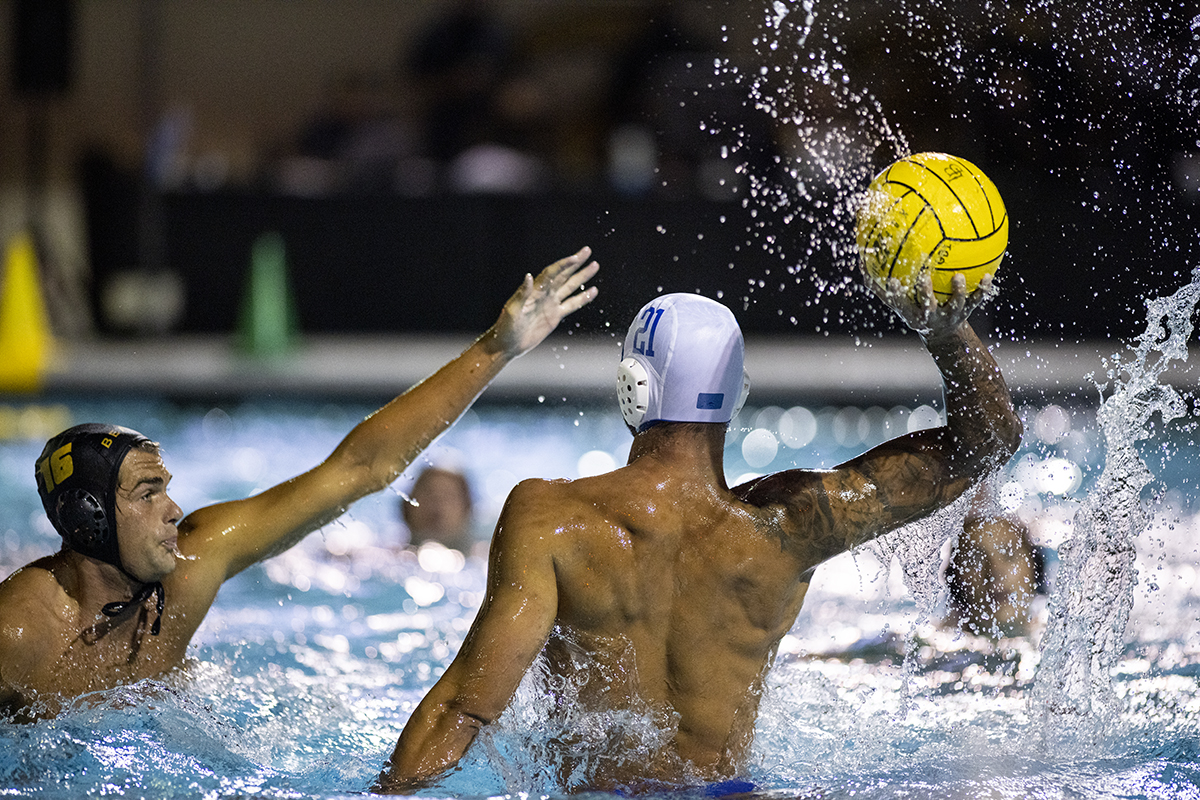