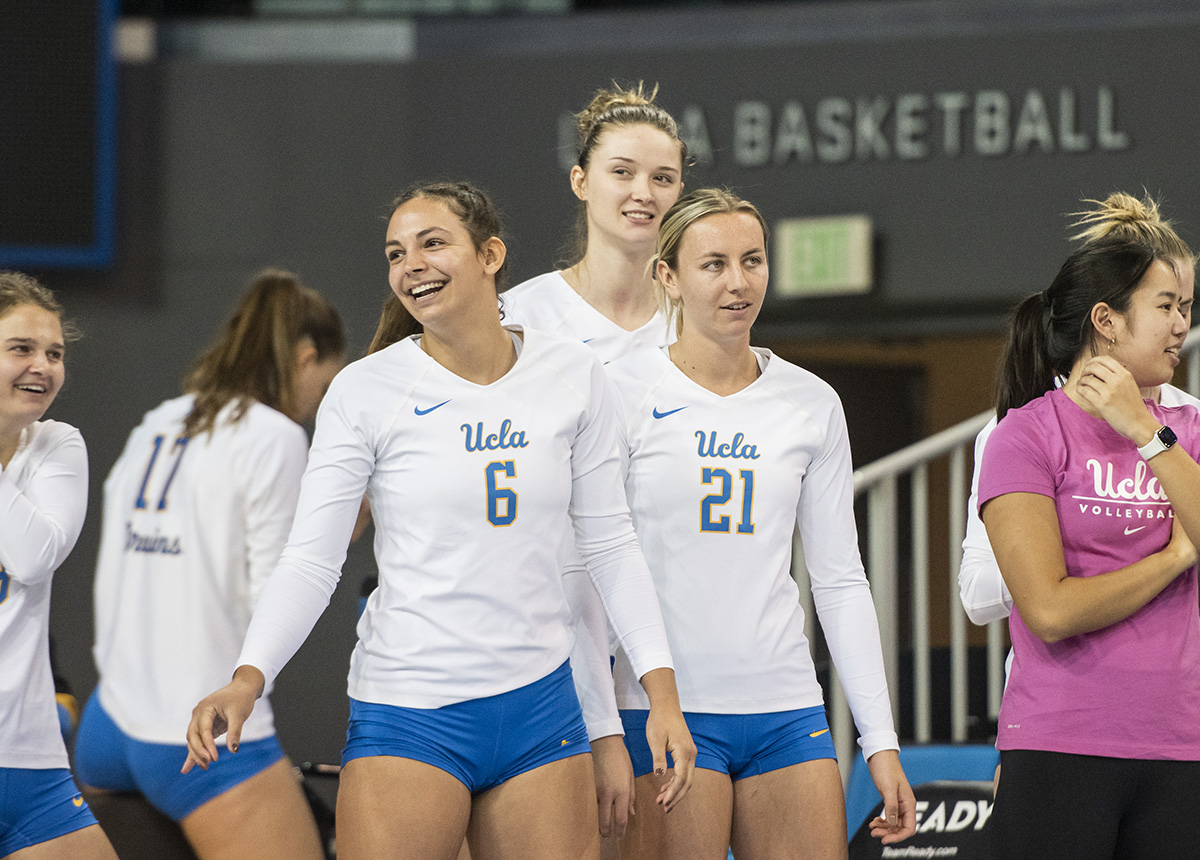 UCLA women’s volleyball’s smiles during the team’s three-set victory over Oregon State on Oct. 24. Sophomore Kate Lane has become a rotation player since making her season debut during a loss to Arizona State on Oct. 17. (Megan Tagami/Daily Bruin)

The Bruins are preparing to face familiar foes.

Following back-to-back victories at Pauley Pavilion, No. 16 UCLA women’s volleyball (15-3, 8-2 Pac-12) will face off at home against No. 22 Washington State (13-7, 7-3) on Friday evening and No. 8 Washington (15-3, 8-2) on Sunday afternoon. Earlier this season, the Bruins were victorious against the Cougars but were defeated by the Huskies, with both games ending after five sets.

Against Washington, UCLA led 2-0 before it fell short in the final three sets. Outside hitter Claire Hoffman finished the match with 20 kills for the Huskies, 11 of which occurred in the last three frames.

Sophomore setter Kate Lane, who observed her team from the bench during the loss to Washington, said it is important for the team to prepare its defense for Hoffman.

“They are going to come out strong against us, especially because they have a lot of great hitters,” Lane said. “We need to be fundamentally sound, take care of business on our side and get good touches.”

Lane subbed in for graduate student setter Shelby Martin in both games this past weekend after making her first season appearance during a loss to Arizona State on Oct. 17.

Although Lane recently began making appearances in matches, the sophomore said she is motivated to contribute defensively, especially with the support from her teammates.

“Being ready and engaged on the bench is helpful, and then coming into the game with smiles and positivity from my teammates takes a lot of the pressure off,” Lane said.

The Bruins will take on the Cougars on Friday at 7 p.m. and the Huskies on Sunday at 4 p.m.

The Bruins will buzz to the Beehive state with some new faces on their travel team.

Two weeks after competing in two meets in one weekend, UCLA cross country will head to Utah to compete in the Pac-12 cross country championships on Friday morning at the Salt Lake City Regional Athletic Complex.

At the Highlander Invitational in Riverside on Oct. 16, sophomore Jake Parker paced the Bruins in the men’s 8,000-meter race. Assistant coach Devin Elizondo said he expects Parker – who finished 12th overall in the 2020 Pac-12 championships as a freshman – to take another step forward this weekend.

“Its great to see (Parker and freshman Mia Kane) step up in a big spot and shine bright (at the Highlander Invitational),” Elizondo said. “We’re looking for (Parker) to assert himself, and Riverside was a great step forward for him.”

Parker isn’t the only underclassman who earned a top-15 finish in Riverside, as Kane came in 15th overall in the women’s 6,000-meter race.

Elizondo said the underclassman duo was added to the travel team in preparation for the championship meet this weekend.

“Mia is brand new to the program, out of high school five months ago and has really shown some promise,” Elizondo said. “They’ll join that group that is coming off the Florida State Invitational/Pre-(Nationals) and to our top 10.”

The more experienced runners competing for the blue and gold this weekend includes redshirt junior Darius Riley, who placed 69th at the men’s 8,000-meter during the Pre-Nationals Meet in Tallahassee, Florida, on Oct. 15, 1.2 seconds behind redshirt sophomore Peter Herold.

On the women’s side, senior Gwyn George led the way for the Bruins in Tallahassee and will have a chance to build off a 67th-place finish at last year’s Pac-12. championships.

Elizondo said the goal is for the team to improve upon last year’s conference championship, in which the men finished in fifth in a nine-team field while the women came in last out of 10 teams.

“Our upper-class folks have been here, competed at this level and know what to expect,” Elizondo said. “The goal this year is, ‘Can we fight for that mid-pack (fifth, sixth or seventh place) with this young group?’”

Conference play is underway for the Bruins.

Junior swimmer Lindsay Stenstrom, who placed second in the 200-yard backstroke against UC Santa Barbara last week, said welcoming fans back for a competitive race for the first time in 616 days against the Gauchos gave her team extra zest.

“It was such a crazy feeling,” Stenstrom said. “Last year was a little bit weird. We had to really learn how to create our own energy. Now, continuing off of last year, we had so much energy ourselves, but adding the fans – the energy was just incredible.”

The Bruin divers have yet to compete this season and will not face the Cougars, who, like the Gauchos, are without a dive squad.

UCLA last met Washington State two seasons ago, and a win brought the Bruins to 7-0 under then-first-year coach Jordan Wolfrum. Stenstrom said she’s excited to face the Cougars for the first time because she missed out on conference meets as a freshman.

“We haven’t raced Washington State in a really long time,” Stenstrom said. “To be able to have the start of a full conference meet season is pretty incredible. Especially for me – my freshman year I was injured, so I didn’t get to really swim in any of those.” 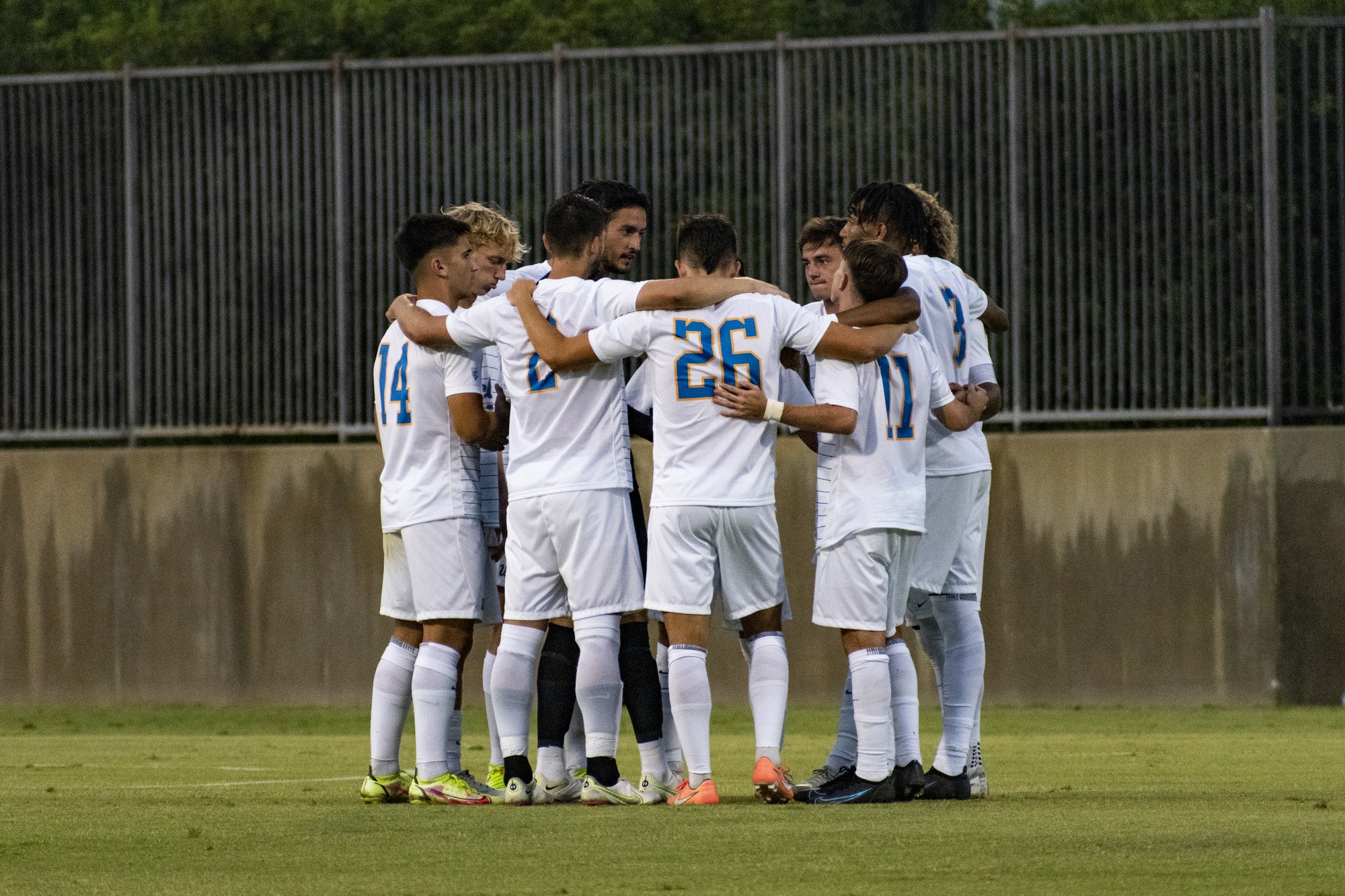 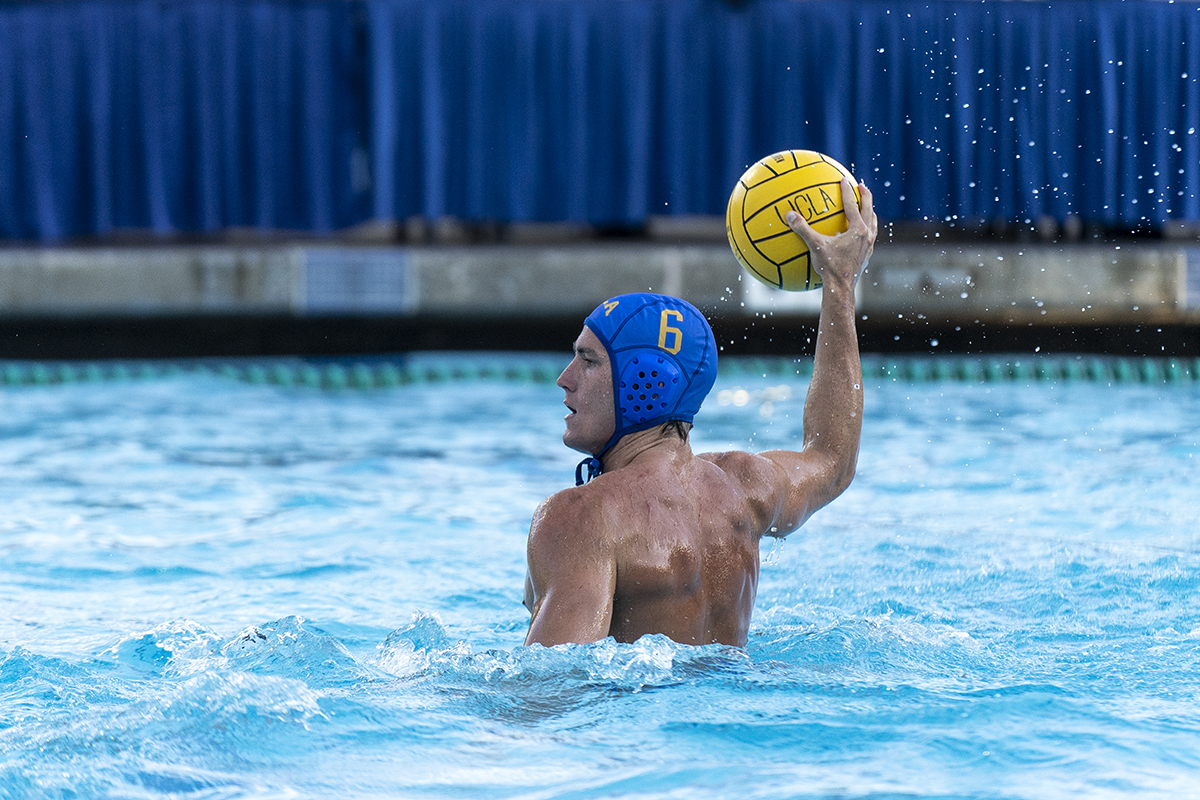