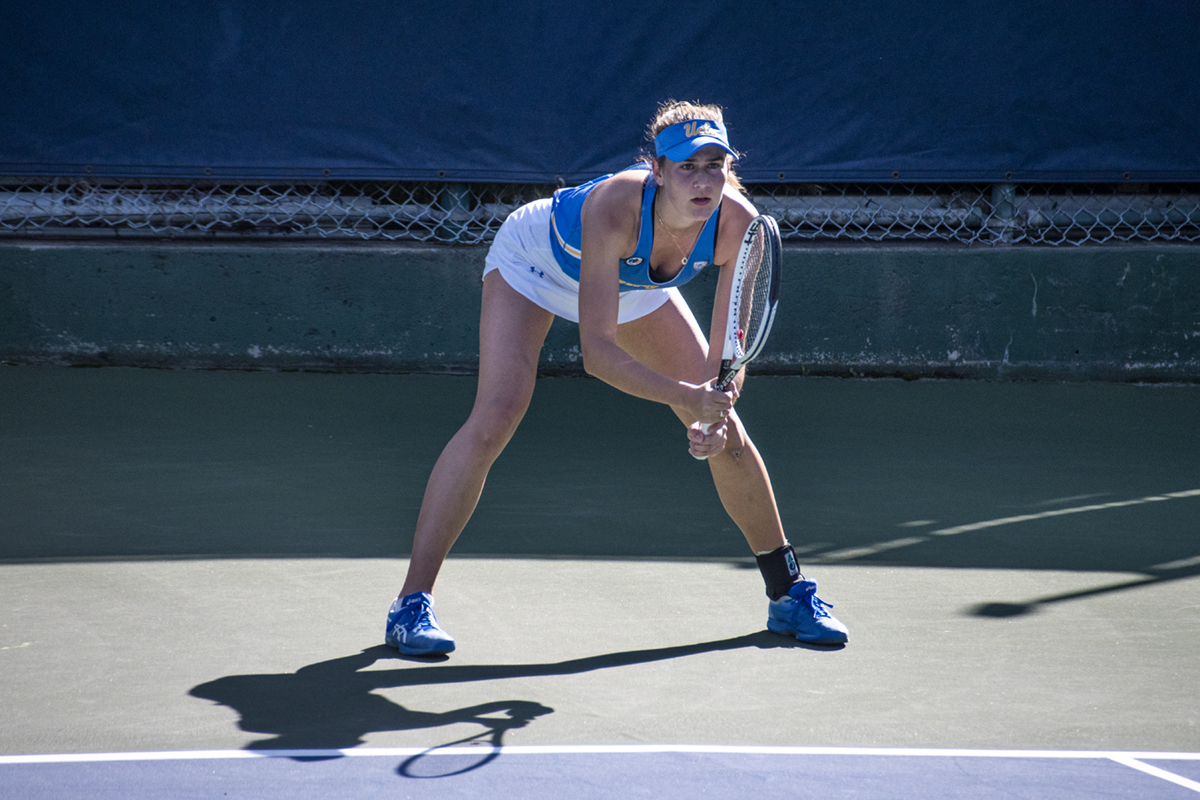 UCLA women’s tennis junior Sasha Vagramov picked up wins in all six of her matches at the Women of Troy Invitational over the weekend, the most wins of the five Bruins who competed in the event. (Jeremy Chen/Daily Bruin)

UCLA women’s tennis sent multiple players to Marks Stadium for the Women of Troy Invitational from Friday to Sunday. The Bruins sent five players total; four of them made their season debuts while sophomore Vanessa Ong joined the team at USC after making an appearance at the ITF Redding 25K earlier in the week.

UCLA took on Arizona on the first day of competition, followed by USC on Saturday and San Diego on Sunday, winning 14 of 16 total matches in singles and doubles play throughout the invitational.

“They did amazing,” said coach Stella Sampras Webster. “I was really happy to see them compete. I’ve already seen our players improve over the last couple of weeks, just from the training and from them working really hard and figuring some things out about their games.”

The Bruins swept the Wildcats in four singles matches and two doubles matches Friday. Two freshmen made their collegiate debuts against Arizona as both Elise Wagle and Ava Catanzarite took the court for UCLA in singles and doubles.

Wagle defeated Arizona’s Lexi Ryngler in straight sets 6-3, 6-3 while also teaming up with senior Taylor Johnson to take down Belen Nevenhoven and Kayla Wilkins by a 6-3 margin in doubles play.

The freshman from Niskayuna, New York, said she felt nerves before playing in her first collegiate match but added that her teammates helped her overcome them.

“Playing at a rival school, I was a little bit nervous,” Wagle said. “But once I got there, got used to it, I was completely fine. The girls were there to just help me through it.”

Junior Sasha Vagramov also made her season debut against the Wildcats at the invitational, coming back from a 2-6 defeat in set one to win her singles match 6-3, 7-5 in the final sets.

Vagramov finished the invitational with three singles wins and three doubles wins, the most of any Bruin.

While two of her singles matches went to three sets, Vagramov said she was proud of her ability to make adjustments during her matches.

“These few matches didn’t go as smoothly as I would have wanted, but I’m proud of myself for being able to problem-solve on court,” Vagramov said. “I felt good that I was able to mentally get through some of the tougher moments during the match and find a way to win.”

On day two, UCLA split its singles matchups against USC, with Ong and Johnson dropping their matches and Wagle and Vagramov picking up wins. Although Wagle played doubles with Johnson against Arizona, the freshman paired up with Vagramov against USC while Ong played with Johnson. Both teams claimed 6-2 victories over their Trojan opponents.

After losing three of their regular doubles players from last season, Sampras Webster said the invitational was a good opportunity to test out different combinations for doubles lineups.

“We’ve got such great doubles players with such great skills,” Sampras Webster said. “It’s going to be fun to see them play with the different combinations and see who meshes with who and what combinations we can put together for all three teams to have chances to win.”

To round out the invitational, Ong, Vagramov and Wagle all took down their San Diego singles opponents, with Wagle pulling out a 5-7, 7-5, 1-0 (6) comeback victory. Ong and Vagramov teamed up for the first time this season to defeat Toreros Abigail Desiatnikov and Jordyn McBride 6-3 after recording wins in both of their doubles matches together last season.

Sampras Webster said the invitational gave the Bruins a good opportunity to compete and get experience before the start of the season.

“It was just a matter of our girls just going out and playing their game and just enjoying the competition,” Sampras Webster said. “Everyone’s just grateful to get to play and compete. I think they felt really good about themselves and had a really good game plan for each match that they played.” 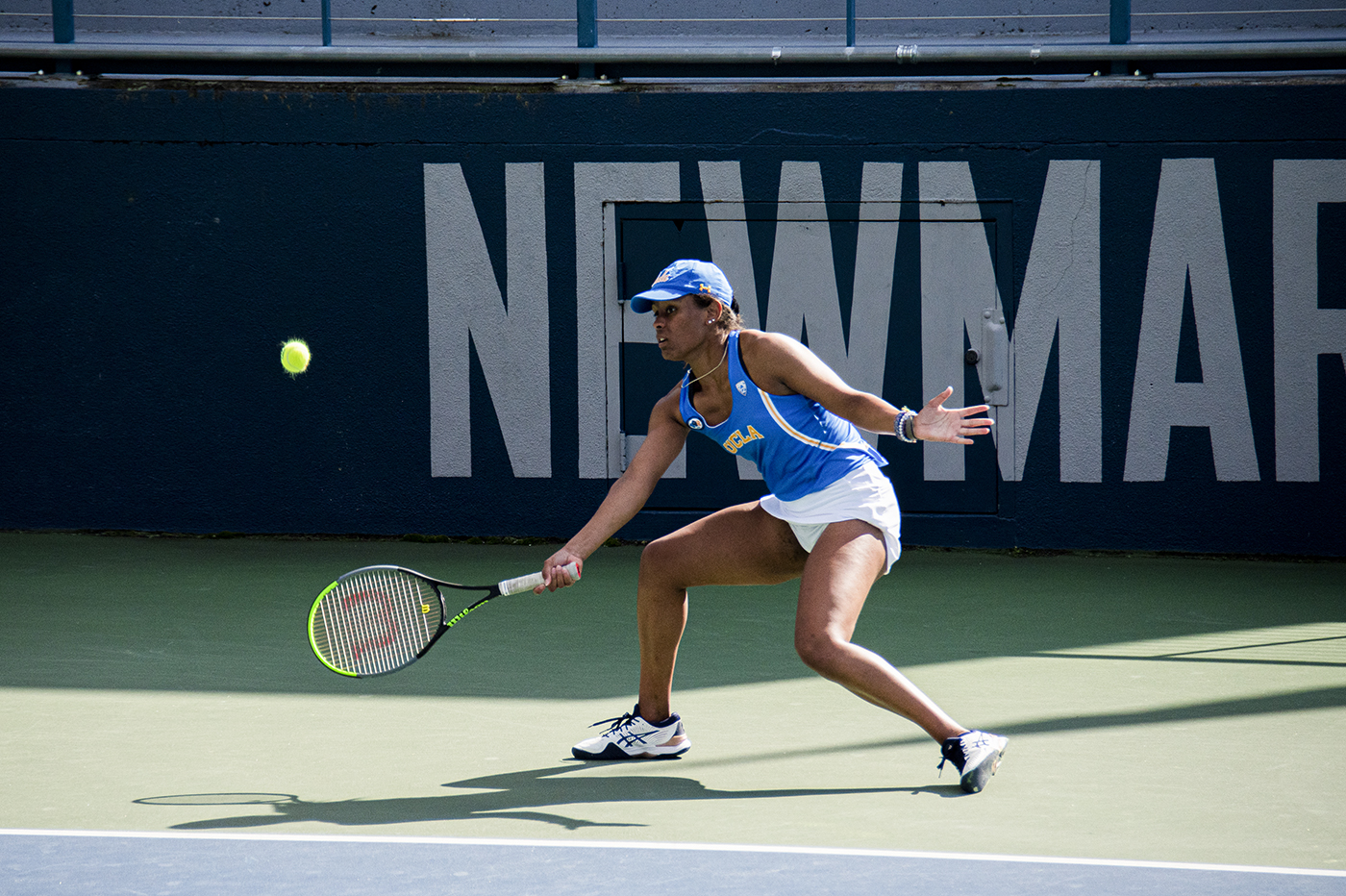