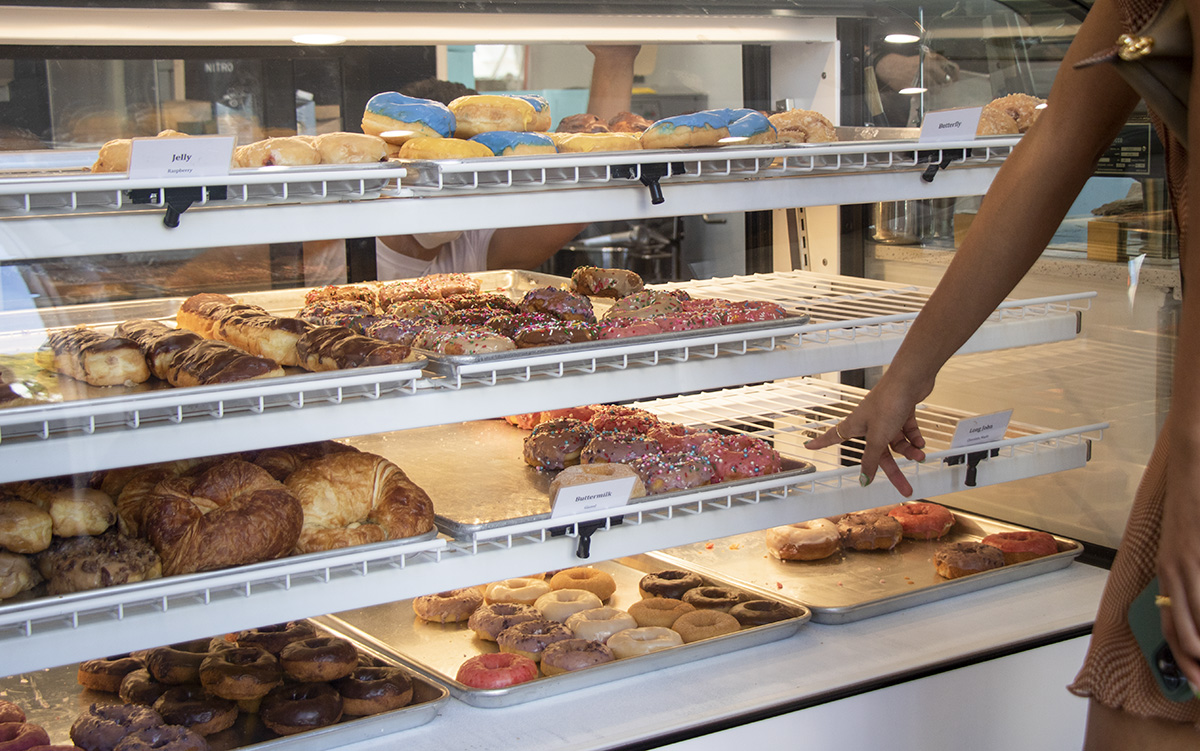 By Anushka Chakrabarti and Anna Novoselov

Primo’s shop fills the vacancy left by Stan’s Donuts, a staple Westwood doughnut store that closed in April 2020 after 55 years because of the COVID-19 pandemic.

Ralph and Celia Primo opened their first location on Sawtelle Boulevard in 1956. Their son Ralph Primo Jr. took over the store’s operations in 2017.

Ralph Primo Jr. said he wanted to purchase the Westwood location as soon as he heard that Stan’s Donuts was going to close down.

He added that it was extremely important to keep the mom-and-pop atmosphere that Stan’s Donuts had sustained for years.

“One of the reasons why I decided to take this job is I wanted to keep that same kind of model of very community-based, family-oriented business instead of the corporate business coming in,” he said. “We want to engage with everybody on a personal level, not just a transaction.”

The new store’s bright blue interior attracted hundreds to the opening to try the donuts, including an opening special of free doughnut holes from noon to 1 p.m.

Primo’s also offers items beyond doughnuts on its menu such as vegan cakes, croissants and gluten-free options.

Primo’s hopes to form a connection with UCLA by offering UCLA-themed doughnuts during major sporting events, partnering with groups such as sports teams and Greek life, and hiring UCLA students, Steelman said.

Three generations of the Primo family attended the opening of the new store.

“Whole family is here. Employees are family, customers are family – that’s the kind of vibe we have here,” Primo said.

He also mentioned the importance of family within Primo’s overall operations.

“In Sawtelle, (where) we’ve been open (for) 65 years, it’s not unusual to have a grandfather come in with his grandson and say, ‘My grandfather used to bring me in when I was his age,’ you know generations of people eating our food, it’s just an amazing thing and you can’t find that in Los Angeles much,” Primo said.

Several students and members of the community attended to support Primo’s grand opening.

Jonathan Chau, a fourth-year computer science student, said he found out about the opening recently from reading the news and decided to come with some friends.

“Yeah, having never been to Stan’s, I’m trying to get the full experience and come here,” said Justin Chen, a fourth-year bioengineering student who went to the event with Chau.

Westwood residents also came out to the opening.

Sam Yebri, a Westwood resident and candidate for Los Angeles City Council District 5, brought his family to attend the opening.

With the current 42% vacancy rate in Westwood Village, Yebri emphasized the importance of Primo’s opening, alongside new stores such as Alfred Coffee and Kreation Organic Juicery, in making Westwood a bustling destination for Bruins and local residents again.

Yebri said he had bought from Stan’s Donuts multiple times in the past and had never seen the Village as vacant as it is now.

“Things are on the upswing now,” he added about the new openings.

Sierra Hagen, a third-year environmental sciences student and employee at Primo’s, said they had been expecting a big crowd.

“We were advertising on all the social media platforms and stuff, so we were expecting a lot of people but I’m not sure if we were even talking quite as many as came (here today),” she said.

Primo said he worked and hung out in Westwood Village as a teenager and grew up watching UCLA basketball games. John Wooden, the legendary former UCLA men’s basketball coach, was a customer of the shop, he added.

He said the Village has changed so much as a result of the pandemic, and he hopes Primo’s can help bring back the community.

“It was just a fantastic place (in the past). I want to help bring that back so that people start hanging out at the Village,” he said. “So hopefully in a small way, we can help that come back.”