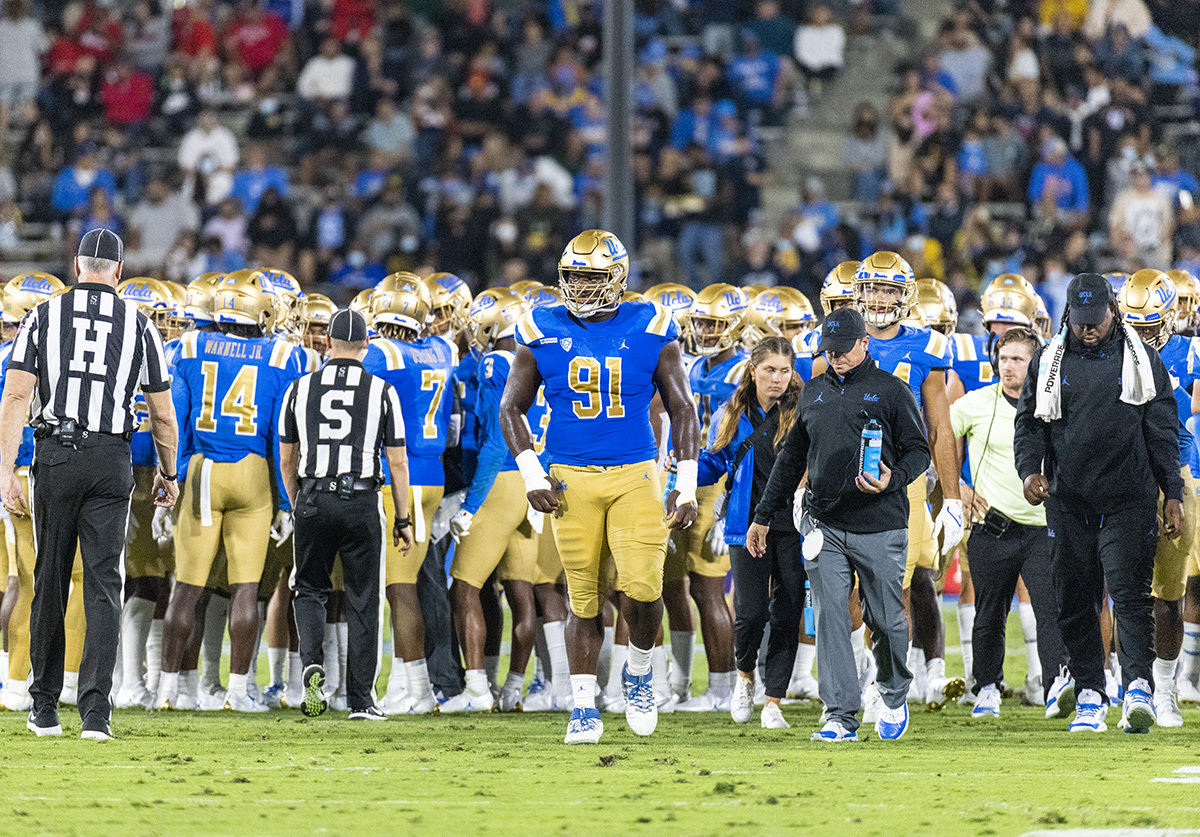 No. 13 UCLA football only has 81 yards of total offense compared to Fresno State’s 276. The Bruins find themselves trailing by 13 points – their first halftime deficit of the season. (David Rimer/Assistant Photo Editor)

The Bruins are halfway to their first loss of the year.

No. 13 UCLA football (2-0) trails Fresno State (2-1) 23-10 at halftime after giving up 276 yards to the Bulldogs in two quarters of play. Fresno State controlled much of the clock with nearly 23 minutes of possession in the opening 30 minutes.

After winning the coin toss and deferring their choice to the second half, the Bruins opened the game with a defensive stand. Bulldogs quarterback Jake Haener, who led the country in passing yards entering the day, was unable to connect with wide receiver Jalen Cropper down the seam on third down as the Fresno State drive stalled.

But it was the Bulldogs who struck first. Following a three-and-out from the UCLA offense, Fresno State went on a 10-play, 55-yard drive punctuated by a touchdown from running back Ronnie Rivers, the school’s all-time leader in touchdowns.

The Bruins backed up the Bulldogs early in the drive with a sack by redshirt senior defensive back Qwuantrezz Knight, but Haener found wide receiver Ty Jones for a 25-yard completion on third-and-24 to extend the drive before Fresno State ultimately punched it in on the goal line.

Less than two minutes later, junior running back Zach Charbonnet found the endzone for his fifth score of the year. UCLA’s scoring drive began with a 38-yard completion down the middle to redshirt sophomore wide receiver Kam Brown – his first catch for the blue and gold since transferring from Texas A&M in the offseason.

The Bruins went back to the ground for the rest of the possession as senior quarterback Dorian Thompson-Robinson tallied two rushes of 10 yards or more before Charbonnet finished the drive.

Haener, who finished the first quarter with 119 yards in the air on 10-of-13 passing, marched the Bulldogs right back down the field with a 14-play, 79-yard touchdown drive that took more than seven minutes off the clock.

A 66-yard kickoff return by redshirt junior running back Kazmeir Allen put UCLA right back in scoring position, but its second three-and-out of the night forced a field goal attempt from redshirt sophomore Nicholas Barr-Mira, who converted his third field goal try of the year to cut the Bruins’ deficit to three.

The Bulldogs extended their lead on the ensuing drive with their third touchdown of the night and second courtesy of Rivers, who broke free of UCLA’s defense on a 36-yard rush and scampered untouched into the end zone.

The Bruins put an end to the streak of five consecutive scoring drives between the two teams, but got the ball back shortly after with the first interception of redshirt junior defensive back Kenny Churchwell III’s career. But it took UCLA only one play to give up possession as Thompson-Robinson lost the ball on a pass attempt, giving Fresno State the ball at the Bruins’ 20-yard line.

The Bulldogs settled for their first field goal of the day, taking a 23-10 lead into the locker room.

The Bruins will receive the ball to start the second half. 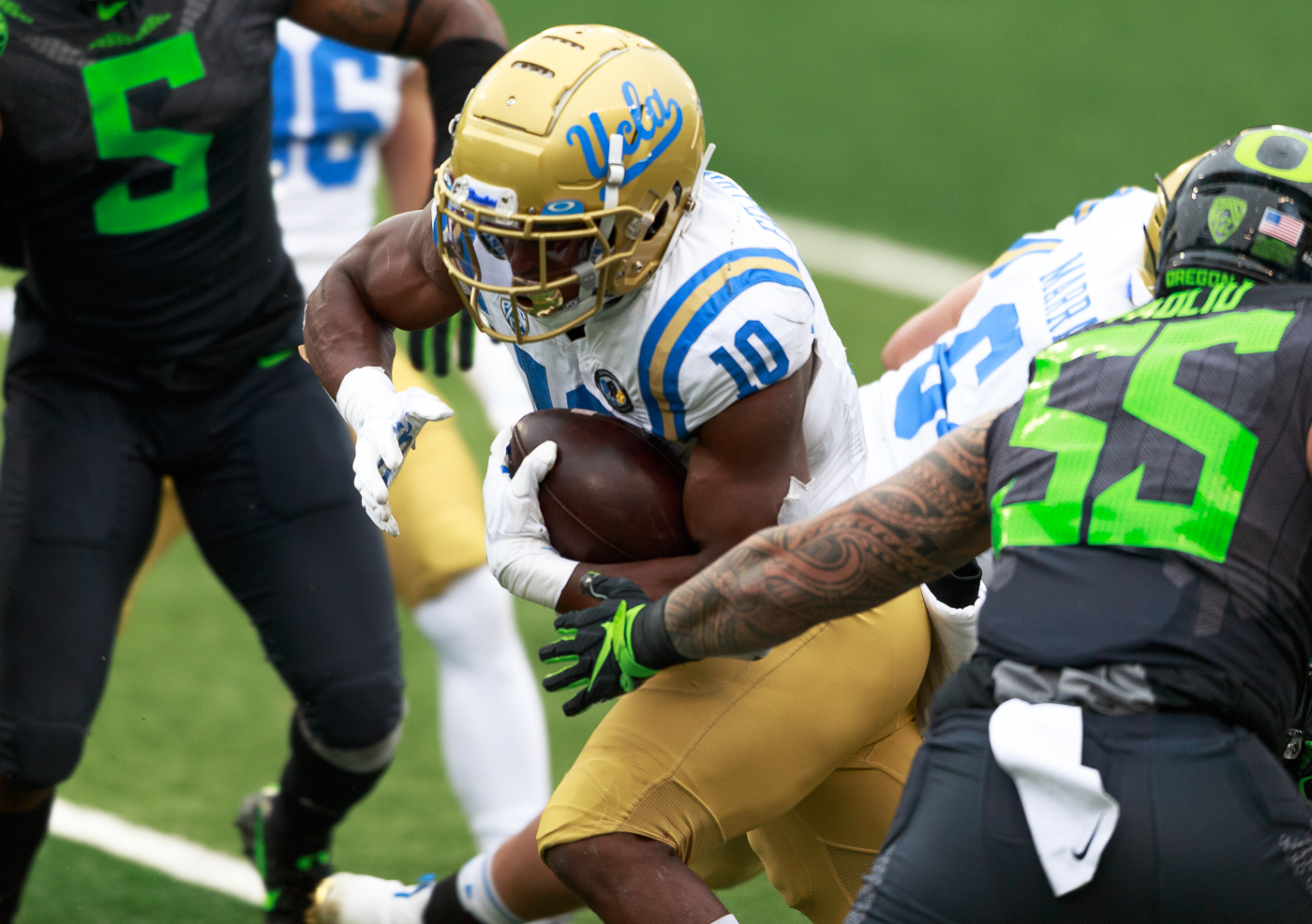 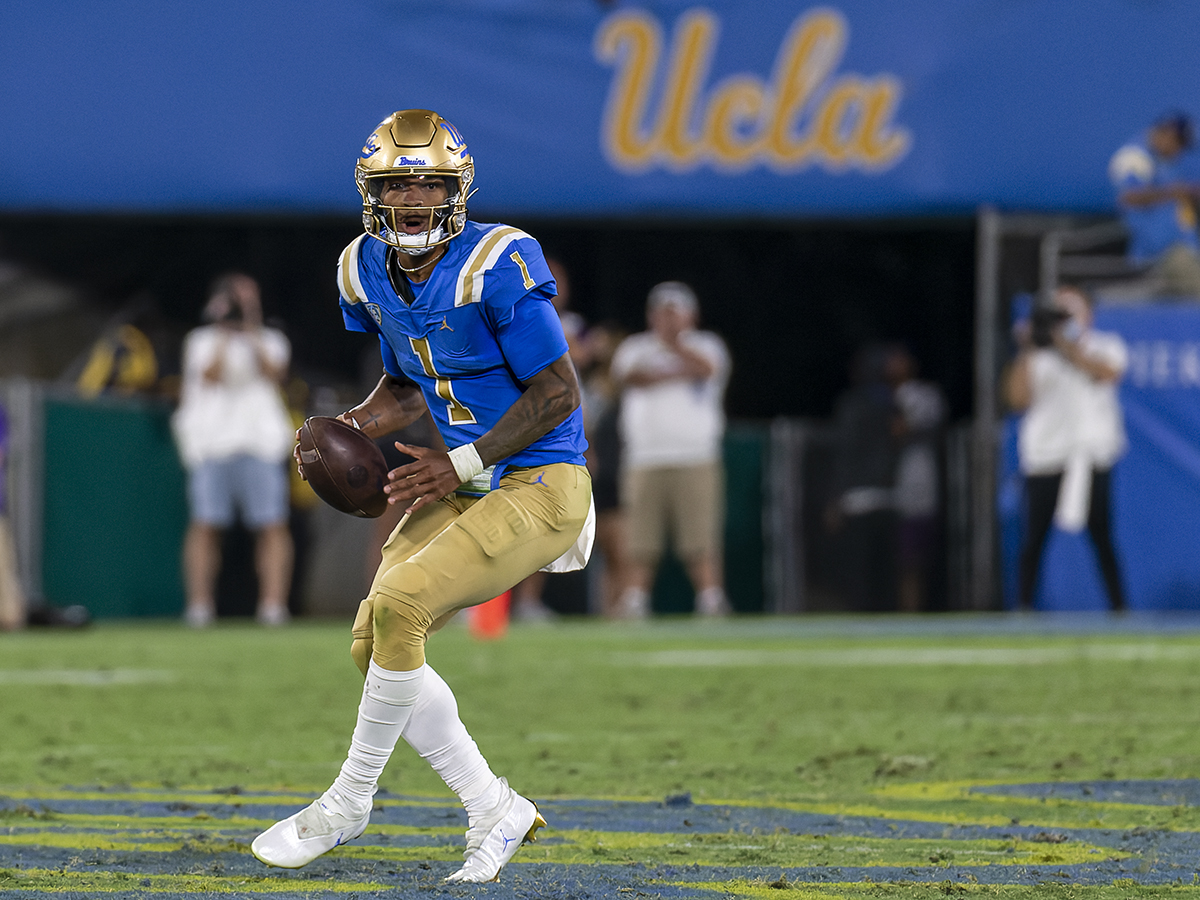 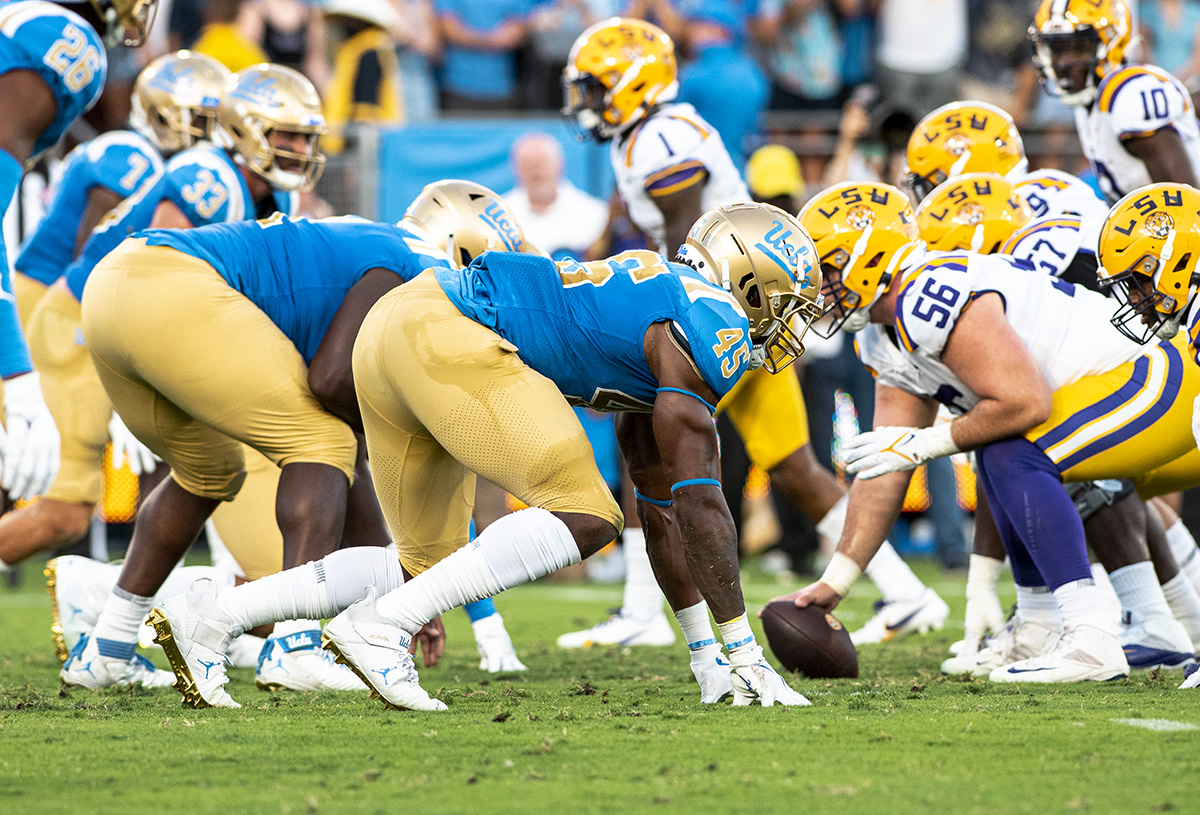 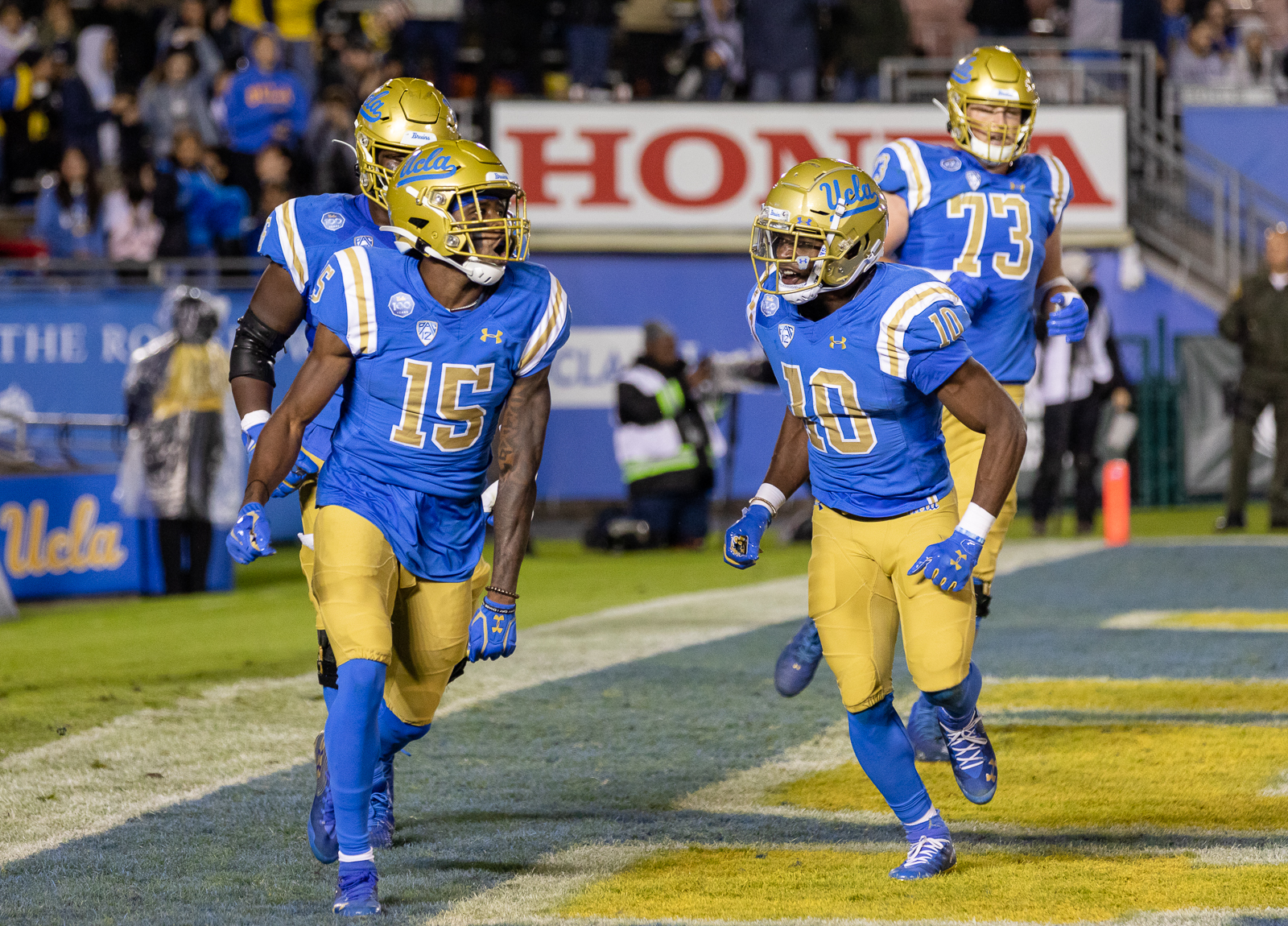