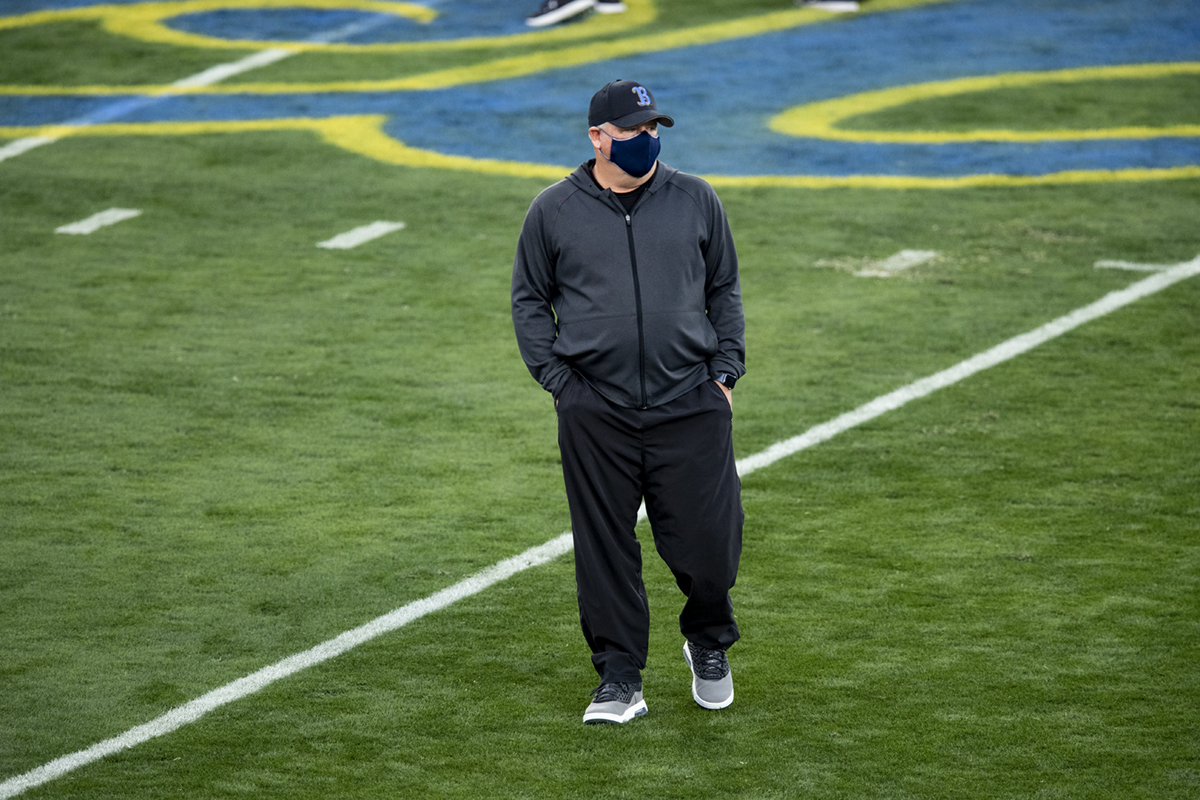 Coach Chip Kelly will coach his fourth season opener with the Bruins on Saturday when UCLA football takes on Hawai’i at the Rose Bowl. A victory would give Kelly his first nonconference win in Westwood. (Daily Bruin file photo)

The 2021 football season has arrived.

UCLA football will kick off its new campaign at the Rose Bowl with a matchup against Hawai’i on Saturday. The game marks the first time since September 2019 that the Bruins will play an opponent outside the Pac-12, giving them the chance to win a nonconference game for the first time in the coach Chip Kelly era.

“We’re excited about the season,” Kelly said. “Our players have had a great offseason and have worked extremely hard. We’re excited to get the chance to get on the field and play Hawai’i.”

After fall workouts finished, the Bruins began their game preparation for the Rainbow Warriors – a team they have yet to play under Kelly – earlier this week. UCLA last matched up against Hawai’i in 2017, a game that ended in a 56-23 Bruin victory.

While only a handful of the players from the 2017 season are still on the team, Kelly said UCLA does have one area of familiarity with its opponent. Before getting hired in the 2020 offseason, Hawai’i coach Todd Graham spent six years on Pac-12 sidelines with Arizona State – a team that had a 3-3 record against the Bruins during his tenure.

In his coaching career, Kelly has a 1-0 advantage over Graham dating back to the former’s years at Oregon.

“They’re always going to be a hard-hitting, aggressive, attacking defense – that’s been Todd’s mentality wherever he’s been,” Kelly said. “His style hasn’t changed. … He’s going to be aggressive and we have to prepare for his aggressiveness.”

The Rainbow Warriors are coming off a 5-4 record a year ago, good for fifth in the Mountain West. In its first year under defensive-minded Graham, the team ranked 54th nationally in scoring defense and 68th in yards allowed per game.

However, Hawai’i also ranked 105th in rushing defense by giving up 211.7 yards per game on the ground. A Graham-coached team had never ranked outside the top 100 in that category or given up more than 200 rushing yards per game since 2006 with Rice, Graham’s first year as a head coach at the collegiate level.

Despite the statistical down year for Graham, redshirt junior wide receiver Kyle Philips said the Bruins still have to be aware of the coach’s aggressive ways.

“Credit to them – they play hard and they’re aggressive,” Philips said. “We have to match that energy and be aggressive ourselves and just execute the way we need to. A lot of teams will have really good, aggressive defenses, but we give them a lot of credit, we’re respecting it.”

Offensively, the Rainbow Warriors ranked in the middle of the pack in the Mountain West last season, finishing either fifth or sixth in passing, rushing and total offense per game out of 12 teams.

Most of their yardage last year came from the quarterback position, as quarterback Chevan Cordeiro ranked in the top 10 of the conference in both passing and rushing yards while finishing second in the Mountain West in total yards. Cordeiro ended the season with over 2,000 passing yards and nearly 500 rushing yards in nine games.

Sophomore wide receiver Matt Sykes said Cordeiro – his high school teammate at Saint Louis School in Honolulu – will be a challenge for the Bruins to contain, particularly on the ground.

“Chevan’s the man,” Sykes said. “He’s got wheels. He’s got everything it takes to be a great QB, so I know he’s gonna do well against us. Of course, I hope we win, but I’m still supporting him.”

That fear of Cordeiro’s legs, however, isn’t shared by UCLA’s defense.

According to senior linebacker Mitchell Agude, the defense’s experience against senior quarterback Dorian Thompson-Robinson every day in practice has uniquely prepared them for matchups against scrambling quarterbacks.

The Bruins did not give up a 100-yard rusher from the quarterback position in seven games last season, and Thompson-Robinson’s 61.2 rushing yards per game average in five games in 2020 was better than Cordeiro’s 53.7 yards on the ground per contest.

“Personally, I don’t see no challenges because everything they do is similar to what we practice,” Agude said. “Like with their quarterback running, Dorian is a really good scrambler, real good with his feet. We practice with that every day, so that’s really nothing new to us.”

Although a few of the Bruins are familiar with this matchup, there is still a source of unfamiliarity for a number of them. Saturday marks the first time fans will be at a UCLA football home game since late 2019.

For players entering their second year with the program, it means it will be the first time they see the Bruin faithful cheering them on.

“You know what, I really can’t tell you (what playing in front of fans is like) because I haven’t done it yet,” Sykes said. “I can only tell you that I’m excited. I’ve only heard good things about the Rose Bowl, so I can’t wait.” 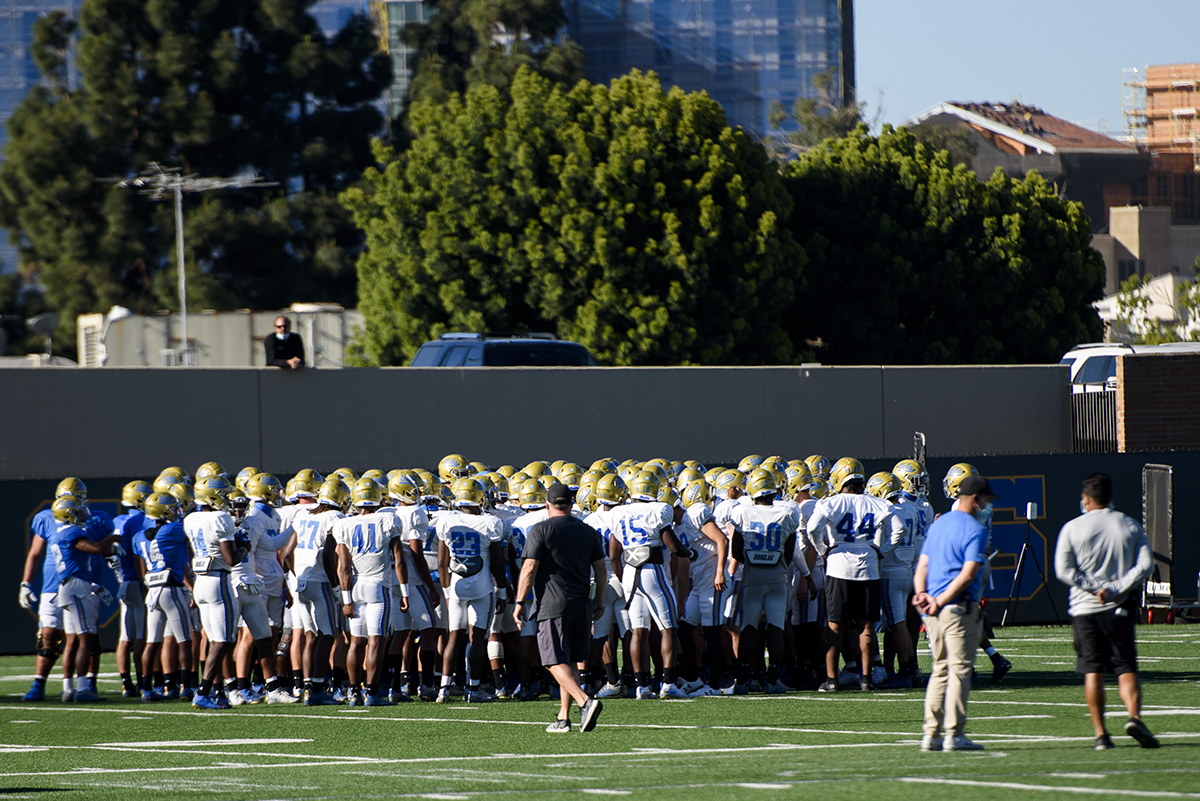 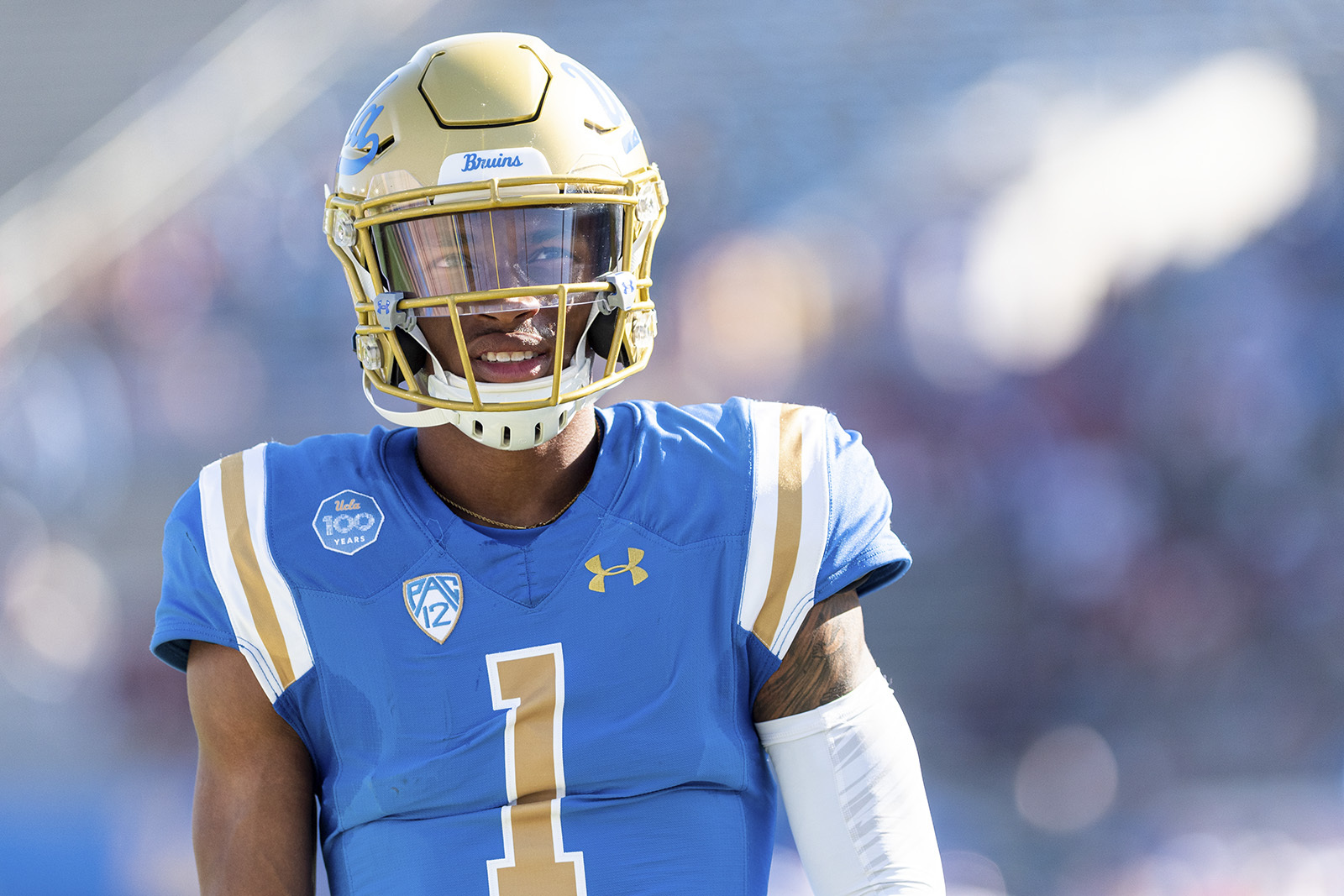