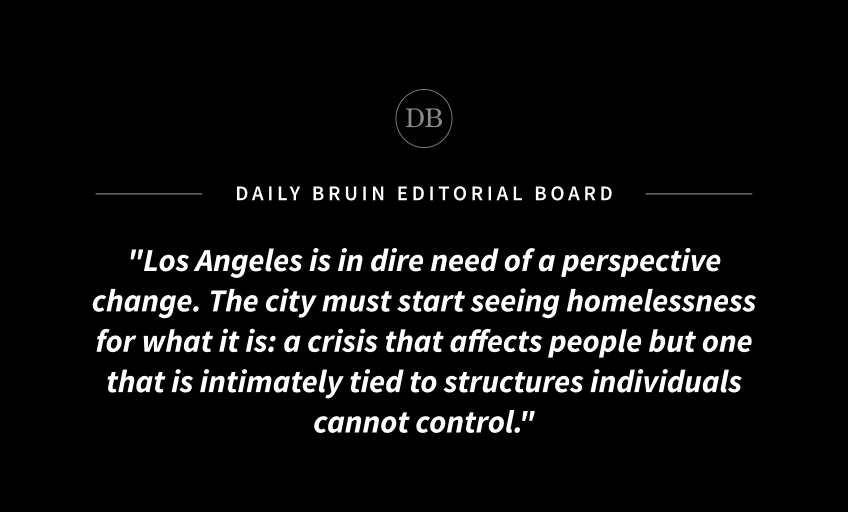 Los Angeles is Spanish for “the angels.”

It has become clear that the city is led by anything but.

Enforcement in certain areas that fall under the ordinance’s purview will require approval by council members and signs so the public is made aware of the designation. People living in these spaces will have 14 days to leave before they are fined.

Los Angeles is home to more than 41,000 people experiencing homelessness, over half of whom do not live in shelters. As of July, the city has enough temporary beds for just one in three individuals without a home.

The ordinance will do nothing to solve this. It will only penalize economic precariousness and the housing insecurity that may accompany it.

Los Angeles is in dire need of a perspective change. The city must start seeing homelessness for what it is: a crisis that affects people but one that is intimately tied to structures individuals cannot control. Actual solutions should focus on humanity more than economic or political gain.

What these “solutions” shouldn’t do is parade as fair policy while making it impossible for people to create a home for themselves.

The ability to exist in a public space is a basic freedom. However, that freedom is no longer available to Angelenos facing homelessness.

A map created by UCLA public health researchers and epidemiologists show there aren’t many places where people experiencing homelessness can stay without violating the law. Because Los Angeles has a shortage of temporary beds and unoccupied permanent supportive housing units, the team determined the ordinance will criminalize homelessness.

Limiting where people can stay and punishing them for not complying is never a solution. Sure, this change may be more human-centered than other proposals. But as advocacy organizations are quick to point out, it will increase interactions between unhoused communities and police, who are now tasked with enforcing the law.

Not to mention, the ordinance won’t prevent sweeps altogether. That should set off alarm bells for anyone who remembers how violently LAPD disbanded the Echo Park encampment in March. Residents now live in Project Roomkey facilities more akin to prisons than their former dwellings could ever be.

Instead, legislators should put their energy toward proven methods – for example, “housing first” policies under which all people experiencing homelessness are offered housing as rapidly as possible with the option to receive supportive services.

It isn’t all bad news, though. The city council recently pledged to build 25,000 new housing units for people experiencing homelessness by 2025. Los Angeles will also receive more than $140 million in state funding over the next two years to sponsor programs for its unhoused population. An infusion of this size has never been more important as we approach the end of eviction moratoriums that have protected many from losing their homes.