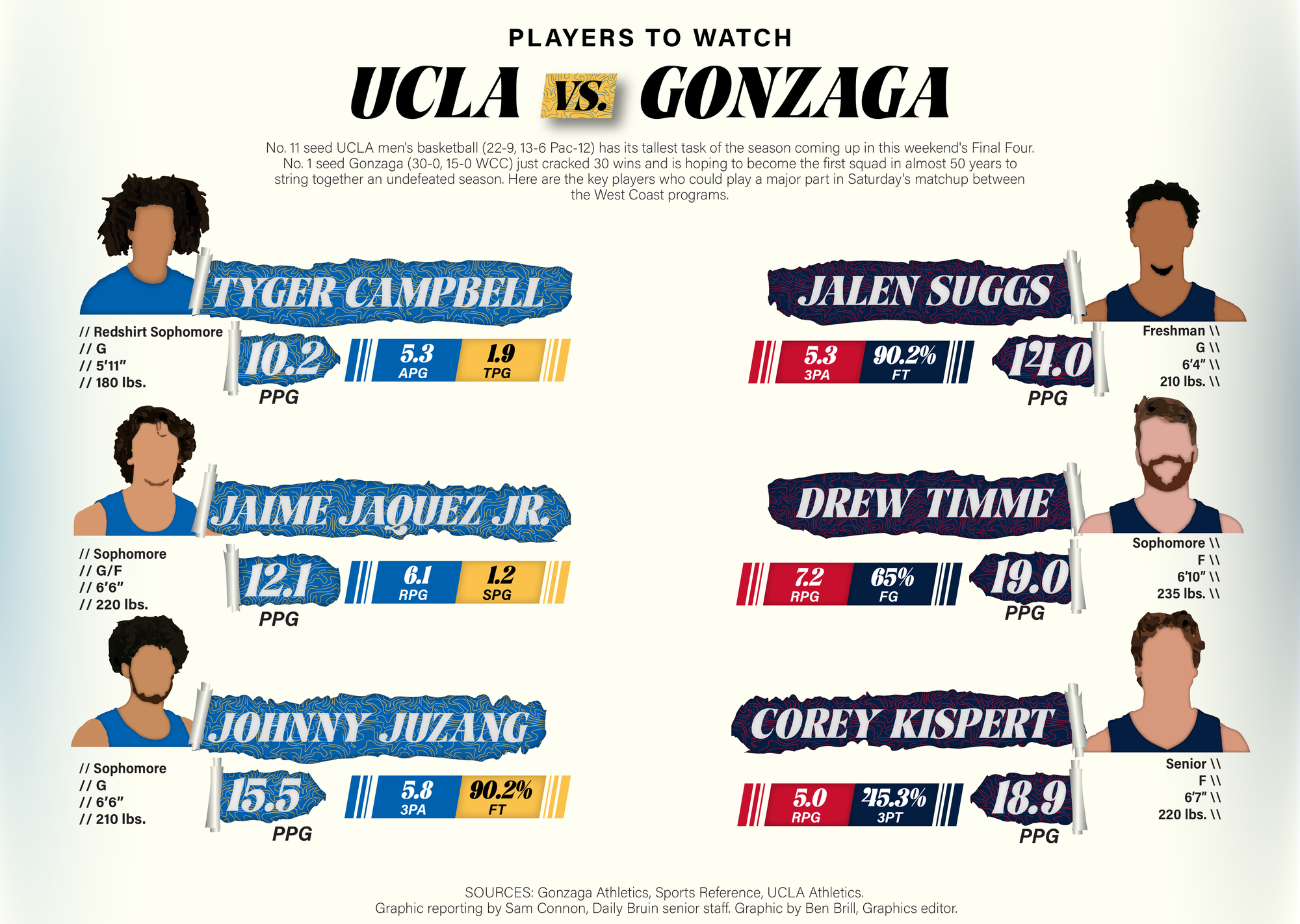 With only four teams remaining in March Madness, it would only make sense for No. 11 seed UCLA men’s basketball (22-9, 13-6 Pac-12) to be facing down its toughest opponent yet. No. 1 seed Gonzaga (30-0, 15-0 WCC) has yet to lose a game all season, and by some measures, it’s the best all-around team the nation has seen in over a decade. The Bruins are one of a possible two teams left standing in the Bulldogs’ way of perfection but will need to match their opponents’ unparalleled efficiency and balance in order to serve as a legitimate roadblock.

With history on the line in Saturday’s Final Four matchup, here’s what Daily Bruin senior staffer Sam Connon sees in UCLA’s next opponent.

INDIANAPOLIS –– There isn’t much to be said about Gonzaga that hasn’t already been said, but here goes.

The Bulldogs boast the highest adjusted efficiency margin since the metric was introduced by KenPom back in 2002, and their adjusted offensive rating of 126.8 points per 100 possessions trails only 2018 Villanova and 2015 Wisconsin – the former of which won the national championship, while the latter was runner-up.

Heading up the historically great offense is the two-headed monster of forward Drew Timme and forward Corey Kispert. Timme averages 19 points per game while Kispert is narrowly behind at 18.9, but the two pose a series of very different threats out on the floor.

Gonzaga’s offense runs through Timme for the most part, even though he plays the five, helping facilitate a balanced offense that relies on high-IQ passing from the middle of the floor and fast-break opportunities. Timme finds cutters from the high post and shooters from beneath the basket better than almost any big man in the country, all while shooting 65% from the field.

With an adjusted tempo of 74.2 possessions per 40 minutes, the Bulldogs run at a faster pace than any other team that made the tournament. A lot of that can be attributed to their guards’ combined 5.1 steals per game, but Timme showed in the Elite Eight versus No. 6 seed USC that he was more than capable of running the fast break with his three takeaways leading to five points in the first half alone.

Kispert is more of a true wing, one that enjoys roaming around the 3-point line waiting for catch-and-shoot opportunities. The forward is shooting 45.3% from deep on 6.4 attempts per game and is just 1.5% shy on his free throws from putting up a 50/40/90 season.

Coach Mark Few has more shooters at his disposal than just Kispert, however, so shutting him down won’t fully solve the 3-point problem staring down coach Mick Cronin. Guards Jalen Suggs, Joel Ayayi and Andrew Nembhard each take more than three triples per game as part of Gonzaga’s 3-point shooting barrage, helping the team hit them at a 37.1% clip – 0.2% better than UCLA’s mark.

Of that trio of guards with a quick trigger, only Ayayi is shooting above 33% from long range on the season, but the ability to get off attempts and spread the defense is enough of a positive for the Bulldogs. Chasing guys off the line like UCLA did against BYU, Alabama and Michigan will be important again come Saturday, but it will take an extra burst of energy in order to cover so many willing shooters.

While Suggs isn’t a top-tier shooter, his 6-foot-4, 205-pound frame has helped him become an elite two-way player even as a freshman. As Gonzaga’s highest-rated recruit since the introduction of the Recruiting Services Consensus Index in 1998, Suggs burst onto the scene by averaging 14 points, 5.5 rebounds and 4.5 assists per game this season.

Add in his 1.9 steals per game and he starts to show why he’s a projected top-five pick in this summer’s NBA Draft, and why Cronin compared him to future Hall of Famer Dwyane Wade on Friday.

His speed and strength at the point guard position is something UCLA has yet to face in its journey to the Final Four, with Oregon’s Chris Duarte maybe posing as the best physical comparison on the slate this past year. Duarte put up 23 points and collected two steals when the Bruins and Ducks faced off earlier in March, and a performance like that out of the Bulldogs’ third option on offense could spell disaster for their chances at an upset.

Projecting UCLA’s theoretical path to victory ahead of its Elite Eight game with Michigan was difficult since the Wolverines were such a balanced team with few notable holes on either end of the floor. Although Gonzaga ranks above Michigan in almost every statistic and metric out there, it might be slightly more clear how UCLA can advance and survive another day.

BYU, which UCLA beat earlier in March Madness, led Gonzaga at the half when it played the No. 1 team in the West Coast Conference tournament. The Bruins will need to reproduce what the Cougars were able to achieve that night by taking care of the ball, controlling the tempo and taking high-percentage shots all night long.

By forcing Gonzaga to conform to UCLA’s style of play – tough, physical, methodical basketball – the Bruins can control the game and use their experience to their advantage.

That’s easier said than done, however, and given the 14-point spread it’s facing heading into the game, it would take everything falling its way for UCLA to pull this one-off. 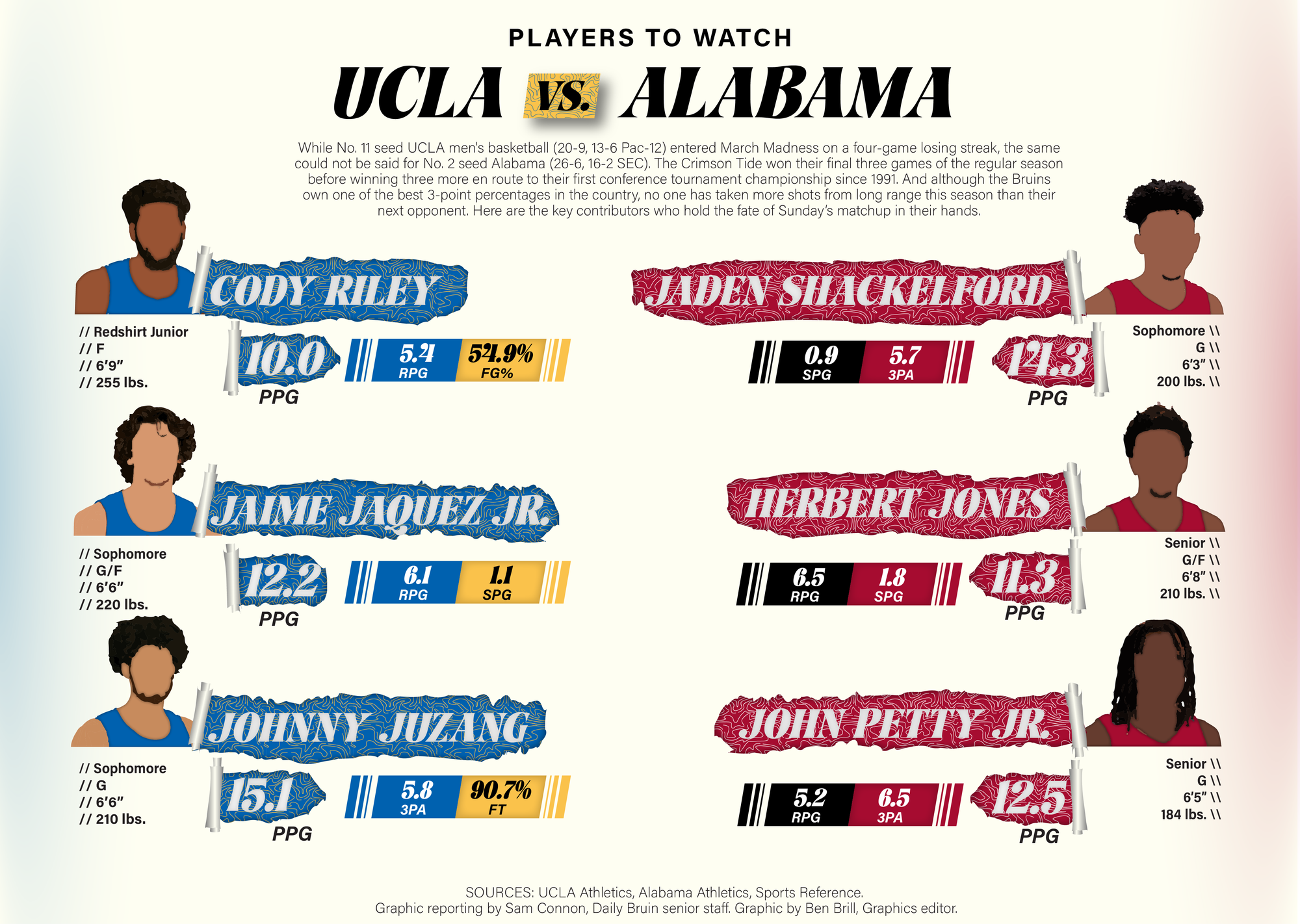 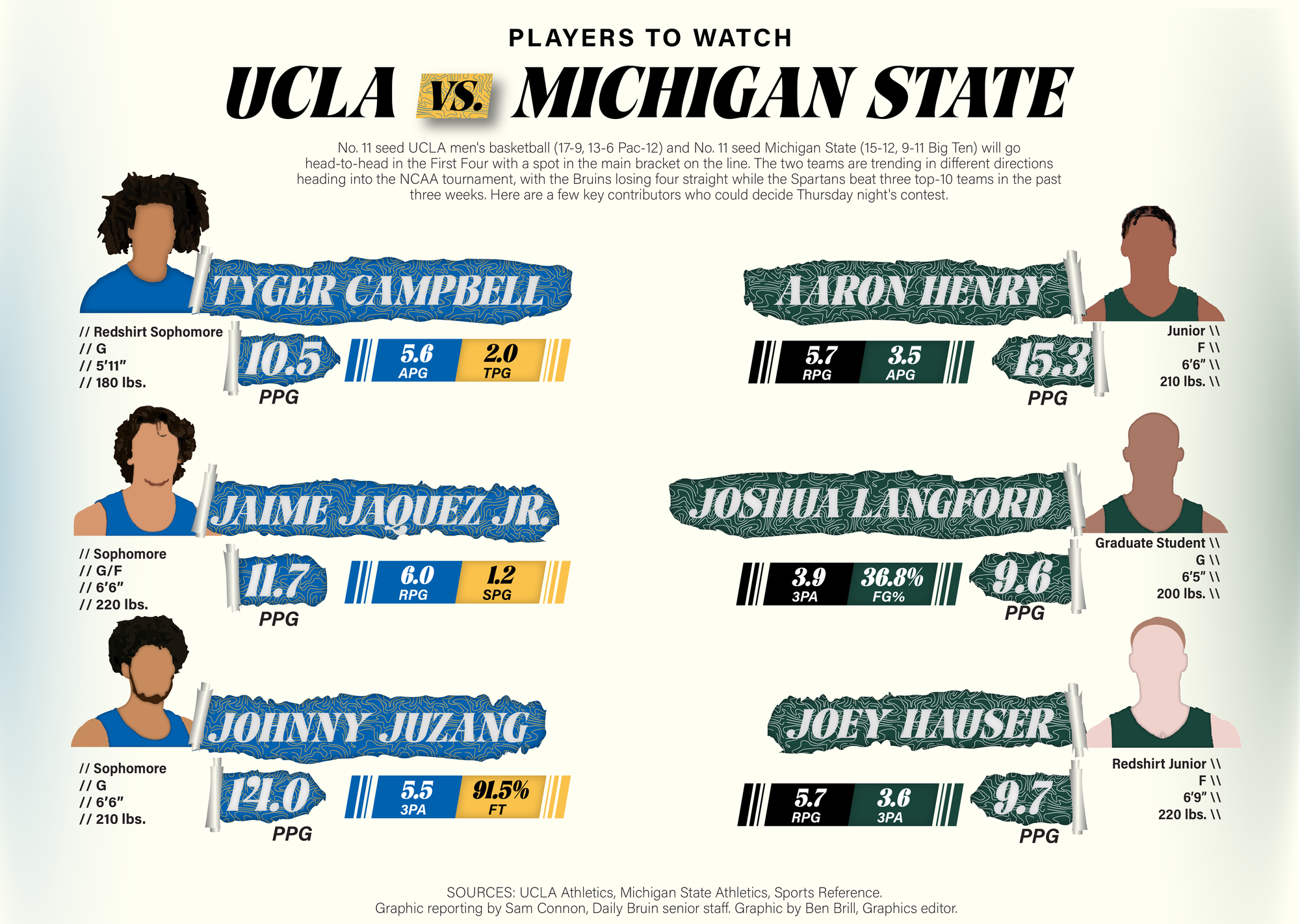 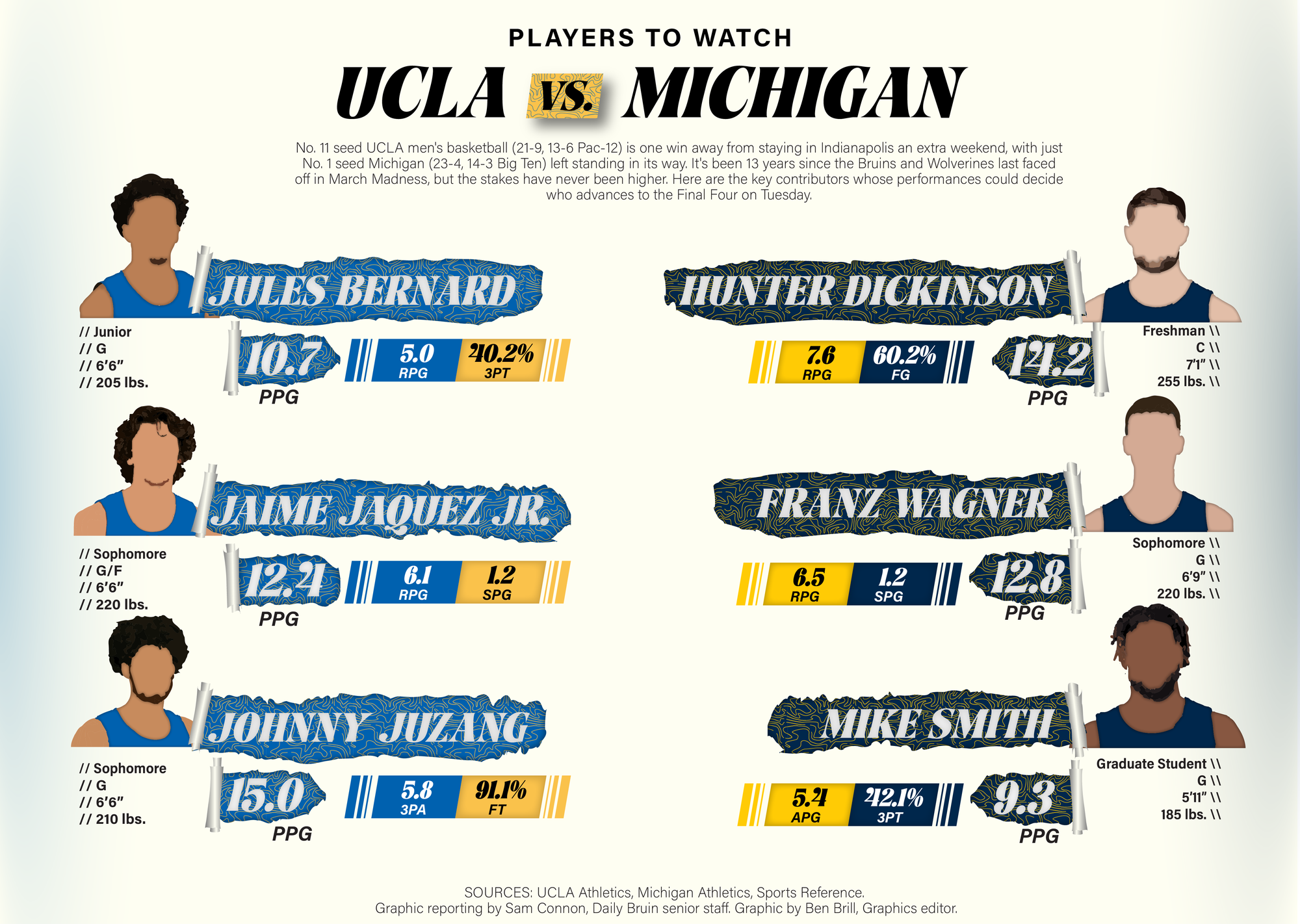 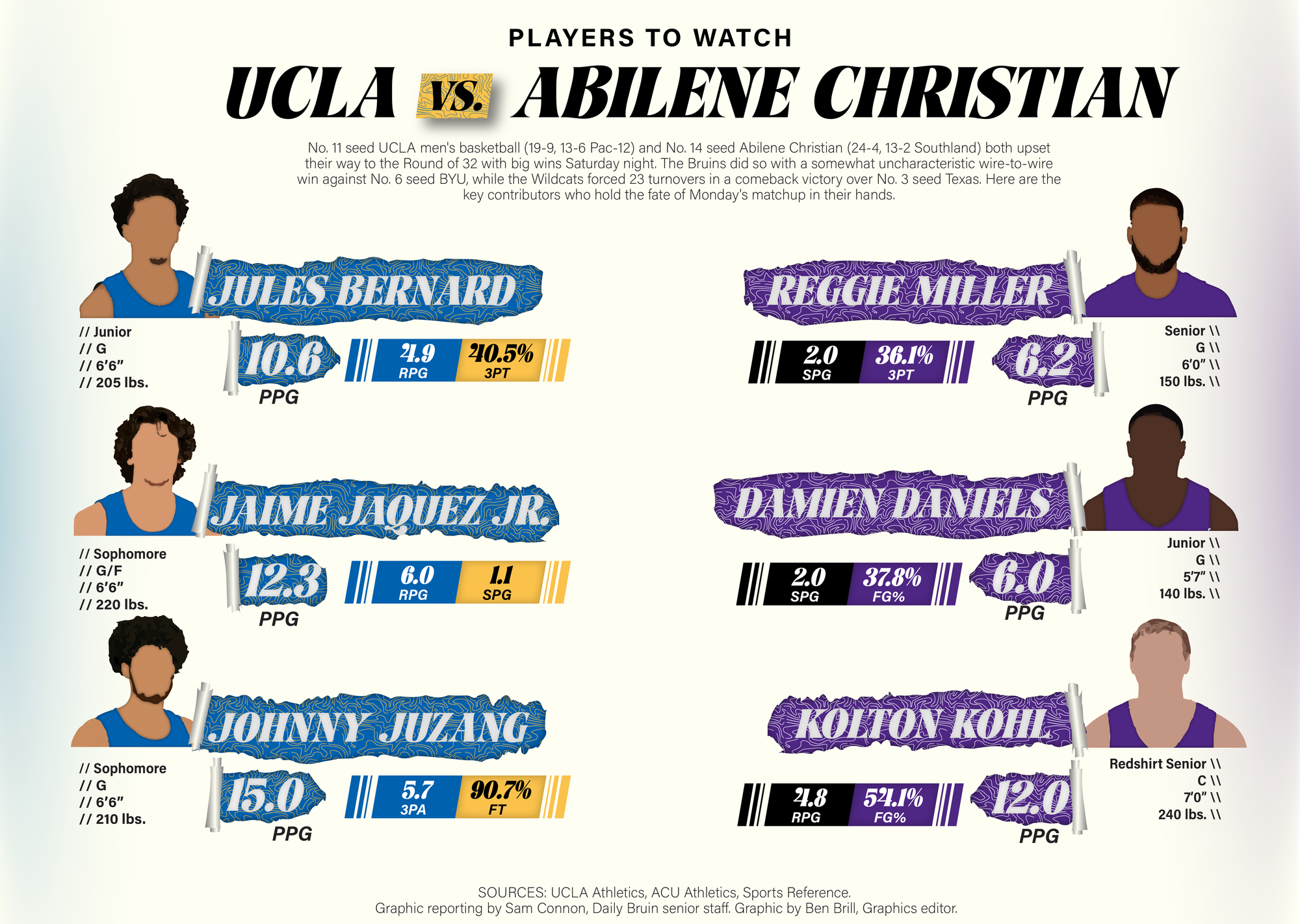