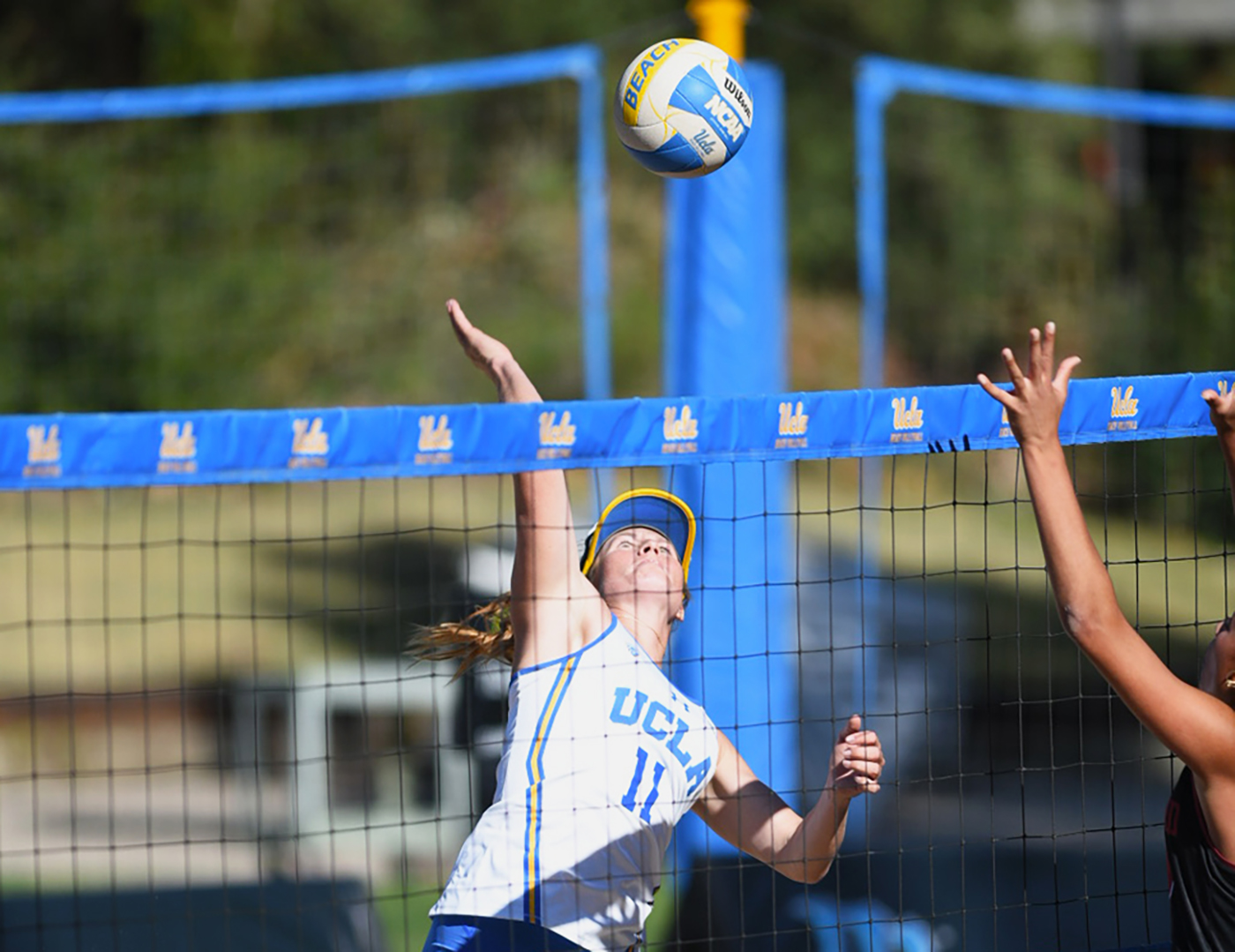 Fifth-year graduate student Savvy Simo and her partner freshman Lexy Denaburg won both of their matches on the top court as No. 2 UCLA beach volleyball opened up its season 2-0. (Ella Barnes/Daily Bruin)

In a year with changed protocols, the Bruins’ lineups also underwent adjustments.

Continuing its back-to-back title defense, No. 2 UCLA beach volleyball (2-0, 2-0 Pac-12) swept its opening weekend doubleheader against No. 19 Stanford (1-3, 0-2) at Mapes Beach. Despite returning eight of 10 starters from last year’s COVID-19-pandemic-shortened season, the Bruins once again debuted a new starting pair on each court to open the year as they did at the start of last season.

From the top, returning fifth-year graduate student Savvy Simo teamed up with freshman Lexy Denaburg on court one. Simo, who amassed a 13-2 record on the same court last year with sophomore Abby Van Winkle, won both her matches with Denaburg in straight sets.

“(Van Winkle and I) obviously played together last year and we flowed really well together,” Simo said. “So it was definitely a change, but I think we’ve worked out any kinks through waves of practice and we played really well today.”

In addition to these changes on the court, UCLA, which had its Thursday opening day matchup against Long Beach State postponed because of COVID-19 protocols, was forced to move its opener to Saturday’s doubleheader.

Simo said the team’s culture – fostered by head coach Stein Metzger – has helped the team keep this season in perspective despite its many unexpected changes to date.

“(Metzger) preaches that beach volleyball players, especially our team, is the model of flexibility,” Simo said. “Obviously, our game against Long Beach got canceled, and you know, no one really got phased. Everyone just was ready to move on and play on Saturday.”

However, among these many changes was something the Bruins hadn’t done in three years – drop two games against Stanford in a match.

In the first match of the doubleheader, the new duo of junior Megan Muret and graduate transfer Jacqueline Quade fell 21-17, 21-19 to Stanford’s Maddi Kriz and Maya Harvey. On court four, freshman Rileigh Powers and redshirt freshman Jaden Whitmarsh lost in straight sets to Maddie Dailey and Amelia Smith, a pair that appeared in 10 games together for the Cardinal last season.

Still, Metzger stressed the importance of these new pairings in part because of their ability to provide more than just the sum of their parts. His teammate duos, he said, are the result of a two-way examination of his players.

Metzger added he was proud of his team’s flexibility in these moments as it pushed through what he described as an uncharacteristic 3-2 win in its first game.

This flexibility eventually paid off for UCLA in its second game as it captured a straight 5-0 sweep against Stanford without dropping a single set.

Along with Simo and Denaburg, junior Lea Monkhouse, who paired with redshirt freshman Maggie Walters and redshirt sophomore Cami Sanchez in her two games, swept both of her matches.

“This is something everyone has never experienced before, this pandemic, and I think it’s nice to know that we’ve made it through,” Monkhouse said. “That’s a lesson that I’ve learned from all the big changes in my life and how difficult they can be is that there is a silver lining in it.”

The Bruins will next take the sand after their 2-0 start Thursday against Cal Poly. 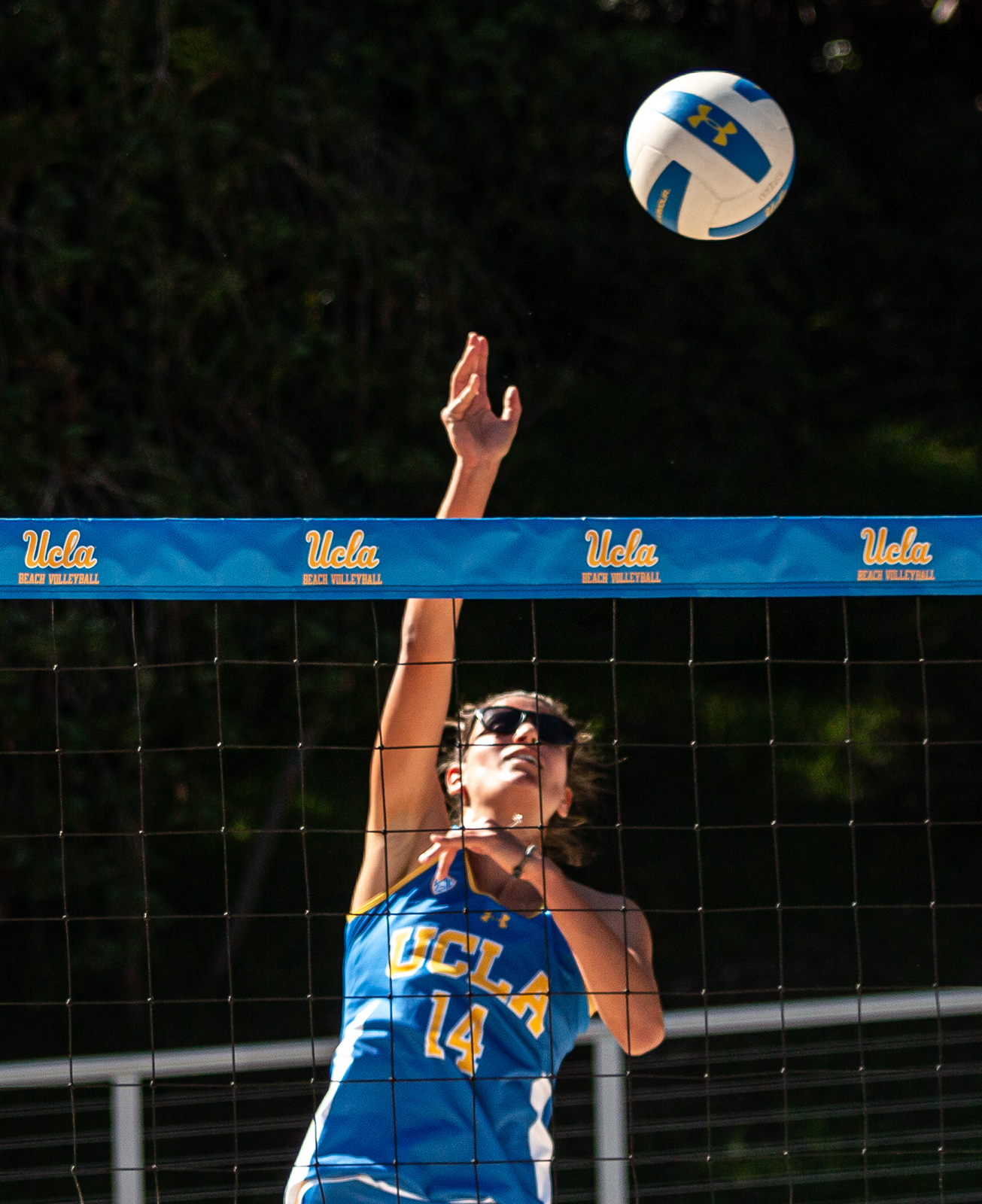