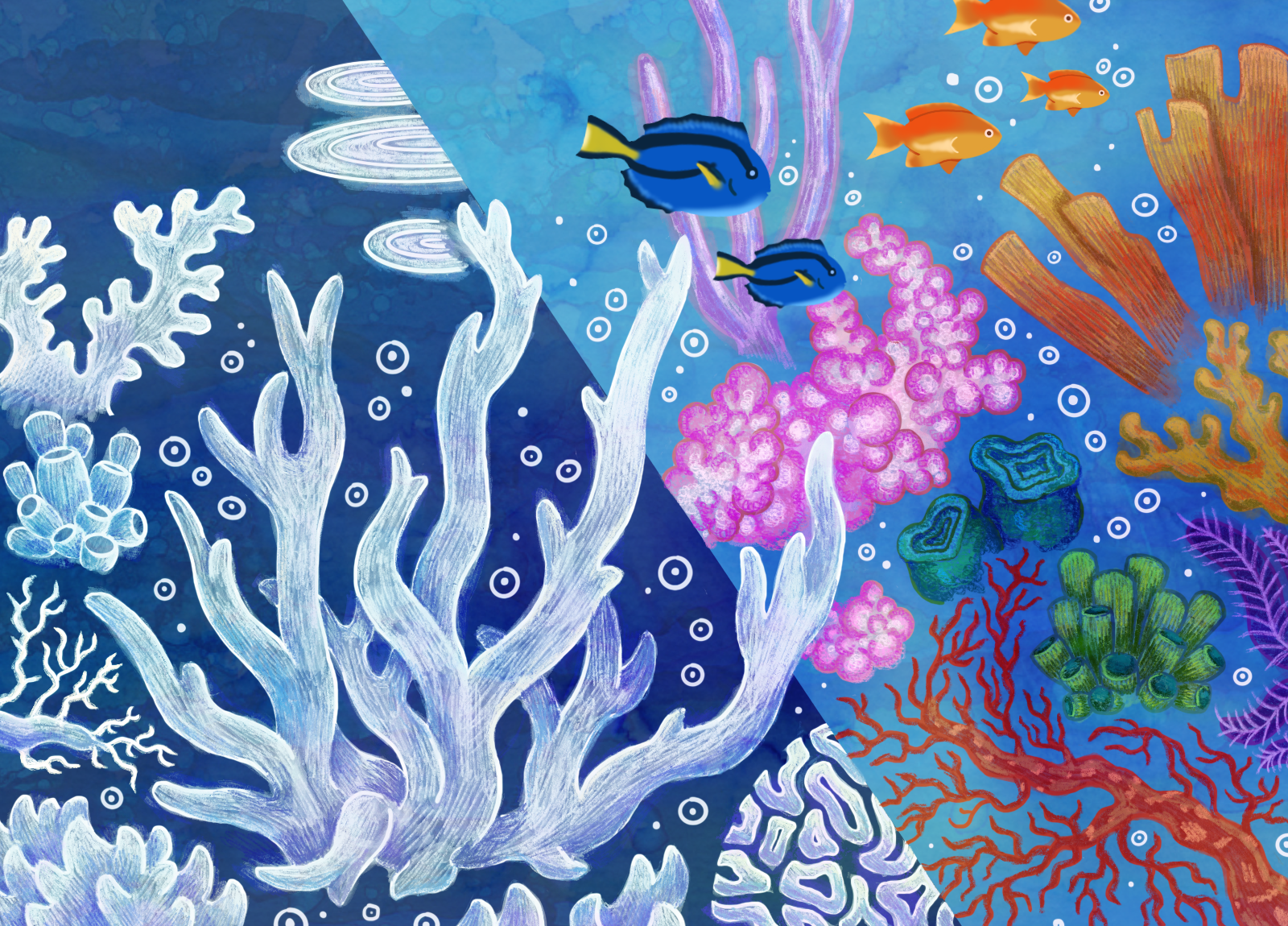 Rising ocean temperatures and ocean acidification could have negative cumulative effects that slow the growth of tropical coral reefs, according to a UCLA-led study published in early January.

In order for coral reefs to survive despite constant degradation by waves and human activity, individual reef-building corals must be able to efficiently build their skeletons through a process called calcification, said Maxence Guillermic, a UCLA postdoctoral researcher and lead author of the study. The coral must maintain the correct internal carbonate conditions to allow the skeletal building material, calcium carbonate, to precipitate, he added.

However, climate change presents several challenges to the survival of these reef-building corals.

Warming ocean temperatures cause corals to lose their symbionts, which are small organisms that live with the corals and provide them with enough energy to continue the calcification process, leading to mass bleaching and reef collapse, said Robert Eagle, an atmospheric and oceanic sciences assistant professor.

Ocean temperatures have risen, on average, 0.13 degrees Celsius every decade for the past 100 years, according to data from the U.S. National Oceanic and Atmospheric Administration. Increased amounts of atmospheric greenhouse gases – namely carbon dioxide – because of burning fossil fuels and ocean water absorption of the heat these gases trap are the primary causes of the rise of ocean temperatures, according to the International Union for Conservation of Nature.

Ocean acidification occurs when carbon dioxide released in the atmosphere dissolves in the ocean and reacts with water, Eagle said.

This study showed that temperature impaired the ability of corals to adapt to ocean acidification, Eagle said.

The loss of symbionts under heat stress, and therefore the energy they provide, likely causes the decreased tolerance of the corals to ocean acidification, Guillermic said. As a result of the bleaching, the corals may have less energy to adjust their internal conditions relative to the increasingly acidic environment, he added.

Understanding exactly how corals can or cannot adapt to environmental change allows researchers to make informed predictions about the corals’ future, Eagle said.

The collapse of coral reefs could create health and food security issues for many human populations across the world, Eagle said.

Coral reefs are some of the most productive and diverse environments on the planet, Eagle said. The loss of these extensive reef systems would be devastating to several developing countries that rely on the fish supported by these systems as the main source of protein in their diets, he added.

“Climate change and its negative effects are felt more and harm the more vulnerable communities, which are often the minority communities, the developing countries and low-income communities,” Minden said.

Guillermic said it is the U.S. government’s responsibility to decrease carbon dioxide emissions in order to mitigate the effects of global warming and ocean acidification.

Minden added that spreading awareness is one of the best ways to combat climate change – if enough people understand the problem of climate change and demand reform, policymakers will vote accordingly to create positive change.

Beyond promoting government action, there are steps that people can take in their everyday lives to support sustainability.

Simple changes such as reducing plastic use, changing eating habits and choosing products and companies that are sustainable can have a positive impact on the environment, said Savannah McCarthy, a third-year environmental science student and a fundraising director of the Surfrider Foundation Club at UCLA, an ocean conservation and activism club.

Guillermic said there is an urgent need to understand the interactions between different stressors and the effects these interactions have on reef-building coral populations. The nature of the relationship between corals and their symbionts may be key to understanding these effects, and follow-up studies will explore this relationship in greater depth, he added.

“This work is just another piece in the puzzle,” Eagle said.