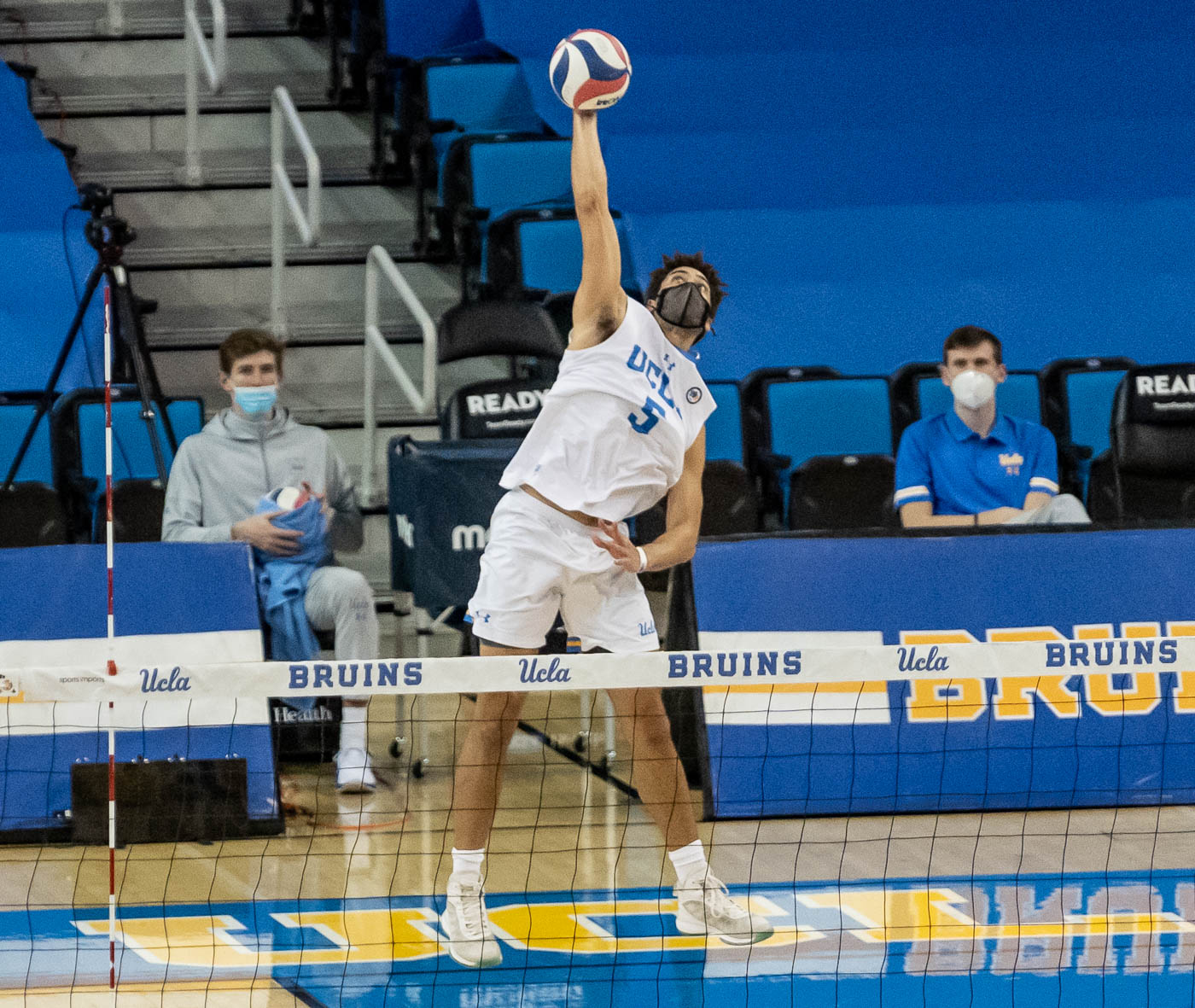 Redshirt senior outside hitter/setter Sam Kobrine had a career-high 40 assists in Friday’s victory as the Bruins adjusted without 2020 All-MPSF Freshman setter/opposite Mads Kyed Jensen, who signed with a professional team in Italy after a single year in Westwood. (Elise Tsai/Daily Bruin)

In No. 8 UCLA men’s volleyball’s (1-0) sweep of conference foe No. 10 Grand Canyon, coach John Speraw was without Mads Kyed Jensen, who left the program after his freshman season to sign with Italian club NBV Verona.

The 6-foot-10 setter/opposite earned All-MPSF Freshman honors in 2020, with his average of 0.60 aces per set landing him second in school history and first among all setters in the country.

A vacancy at the setter spot created an opportunity for redshirt senior outside hitter/setter Sam Kobrine, who had seen action as part of a two-setter lineup last season before leading the team with a career-high 40 assists Friday.

Speraw said the new insertion has not come at the expense of chemistry, but there is still room for growth for team continuity after a 1-0 start.

“We invested a lot of time into (Kyed Jensen) who took a pro contract and left, so Sam Kobrine here in his senior year (has) an opportunity to come out and set for the first time,” Speraw said. “There’s connections there we need to improve on, and that’s true in every season but especially when you have a new quarterback. In terms of chemistry in interpersonal dynamic and integrating new players in that regard, I think it’s been really good.”

The victory also represented the collegiate debut of redshirt freshman outside hitter/opposite Merrick McHenry after he did not see the court in his true freshman season last year.

According to Kobrine, McHenry’s first game also saw a transition to a variety of places on the hardwood.

“Merrick McHenry has been our opposite, it’s a lot of versatility involved,” Kobrine said. “With a lot of the (COVID-19) protocols, people are having to be versatile and play out of position, like Merrick, who started the season as our opposite (then) transitioned to middle, and I think he did really well today in his first match.”

Kobrine’s fellow setter redshirt junior Adam Parks was also on the move, transitioning to middle as the Bruins completed the sweep in the third set.

Parks was perfect on his two attacks against the Antelopes, and Speraw said Parks was flexible as a volleyball player.

“(Park’s) done a great job for us in training,” Speraw said. “He’s obviously not a typical middle, but he can do a lot of little things really well, and he’s a good volleyball player. So, he can obviously set in transition, he sees the game really well, makes little plays and he scores points in little ways that are more than just blocking when he’s been on the court.”

Speraw said the new lineup options seen in the victory over Grand Canyon may not have been used in other seasons, as the offseason saw departures and recruits barred from the country because of the COVID-19 pandemic.

“What do you do these days?” Speraw said. “We’re in a pretty interesting situation, and I think a lot of teams across the country have returned some guys who are potentially sixth-year guys in positions and who have some experience there. We’re just in a position right now where we’re trying to figure out who can play different spots for us and do the best job we can.”