UCLA gymnasts champion diversity and inclusion on and off the floor 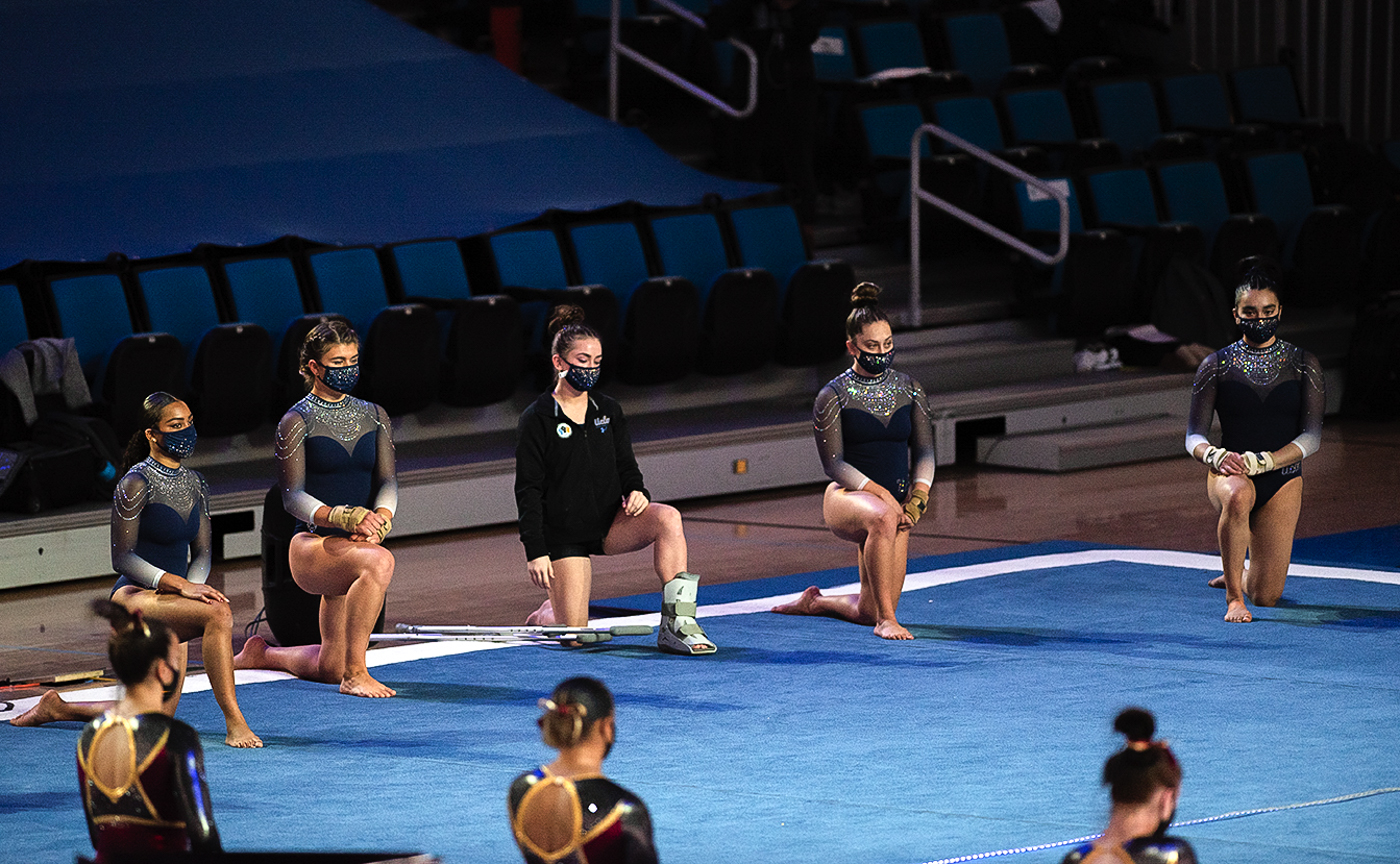 The Bruins boast one of the most diverse student bodies in the nation.

But for UCLA gymnastics junior Margzetta Frazier, it doesn’t always feel that way.

“Even though UCLA is one of the most diverse schools, I have noticed that most of the students from different ethnicities, especially Black students, are athletes,” Frazier said.

Frazier and her program have been at the forefront of efforts to address inequality in America.

The Bruins were the first Pac-12 gymnastics program to release a statement condemning racial prejudice and police brutality in the wake of George Floyd’s death last year. In the following weeks, the team utilized social media to share additional information in support of the Black Lives Matter movement.

Prior to UCLA’s season-opening meet against Arizona State on Saturday, the Bruins and Sun Devils united for a moment of silence in a show of solidarity for social justice and anti-racism. UCLA’s warmup jackets featured a “Stand Together” patch highlighted by the words “equality,” “justice” and “respect,” while the Valorie Kondos Field Floor displayed the same patch.

We united with @SunDevilGym in a Show of Solidarity prior to today's meet. Two teams, one collective cause to support social justice and anti-racism. #GoBruins pic.twitter.com/ZwxIBayPXS

Two Bruins in particular, Frazier and sophomore Kalyany Steele, wanted to make sure their pre-meet tribute was more than just a gesture.

Frazier and Steele will represent UCLA in Gymnasts for Peace, Action, and Change, a student-athlete-driven organization comprised of Pac-12 gymnasts. The organization includes representatives from all eight gymnastics programs in the conference.

G-PAC, according to its mission statement, strives to advocate for diversity and inclusion. The organization hopes to create real change in furthering equality by uniting people through shared experiences, providing educational resources and establishing a forum for discussion among student-athletes.

Steele – who came out as bisexual to her teammates before the team’s Pride Meet last season – said she looks forward to championing inclusivity in athletics.

“I’m proud to be a part of G-PAC, representing UCLA alongside other gymnasts in the Pac-12,” Steele said. “With this group, we hope to create an inclusive space and work toward making a lasting change for student-athletes of all identities to feel included and welcomed within their sport.”

Frazier added she hopes G-PAC’s initiatives motivate other athletic programs across the country to follow suit.

“The G-PAC organization is one that I hope many schools and programs feel inspired to follow,” Frazier said. “Change starts with you and will accelerate when surrounding peers and spectators are given opportunities to be educated on what is truly important. I am very proud to be hands-on in the long-overdue process of making diversity and inclusion in sports the No. 1 priority.”

Since arriving at UCLA, Frazier has used social media as a vehicle to advocate for racial equality.

But developing her voice has been a steady process for the two-time All-American – who said growing up as a gymnast forced her to subdue any inclination to speak out.

“We learned at a very young age discipline and obedience,” Frazier said. “In this sport, because we are so conditioned to just know our place, when it comes to speaking out, it can feel like we are being disrespectful or that we are stepping out of line. And that’s not true.”

Frazier has also been outspoken about diversity, or the lack thereof, in the sport of gymnastics.

In a video with BBC Sport, the former U.S. National Team member recalled instances in which college recruiters and coaches would visit her gym, only to focus their attention on white gymnasts. Frazier said she hopes the emergence of gymnasts like Simone Biles will force coaches to evaluate athletes based on their talent instead of what they look like.

Coach Chris Waller – who said he believes diversity builds excellence – takes pride in the activist ambitions of his student-athletes.

“The fact that our student-athletes not just find the time, but are passionate about making a difference in racial equality, … I couldn’t be more proud of that,” Waller said. “I know that many of them are going to go on and make a huge impact in the world more than they already are.”

While Waller questioned how so many people have been blind to racism in America, Frazier expressed optimism about the future.

By participating in G-PAC, Frazier and Steele hope to make a lasting impact on diversity and inclusion in the gymnastics world and beyond.