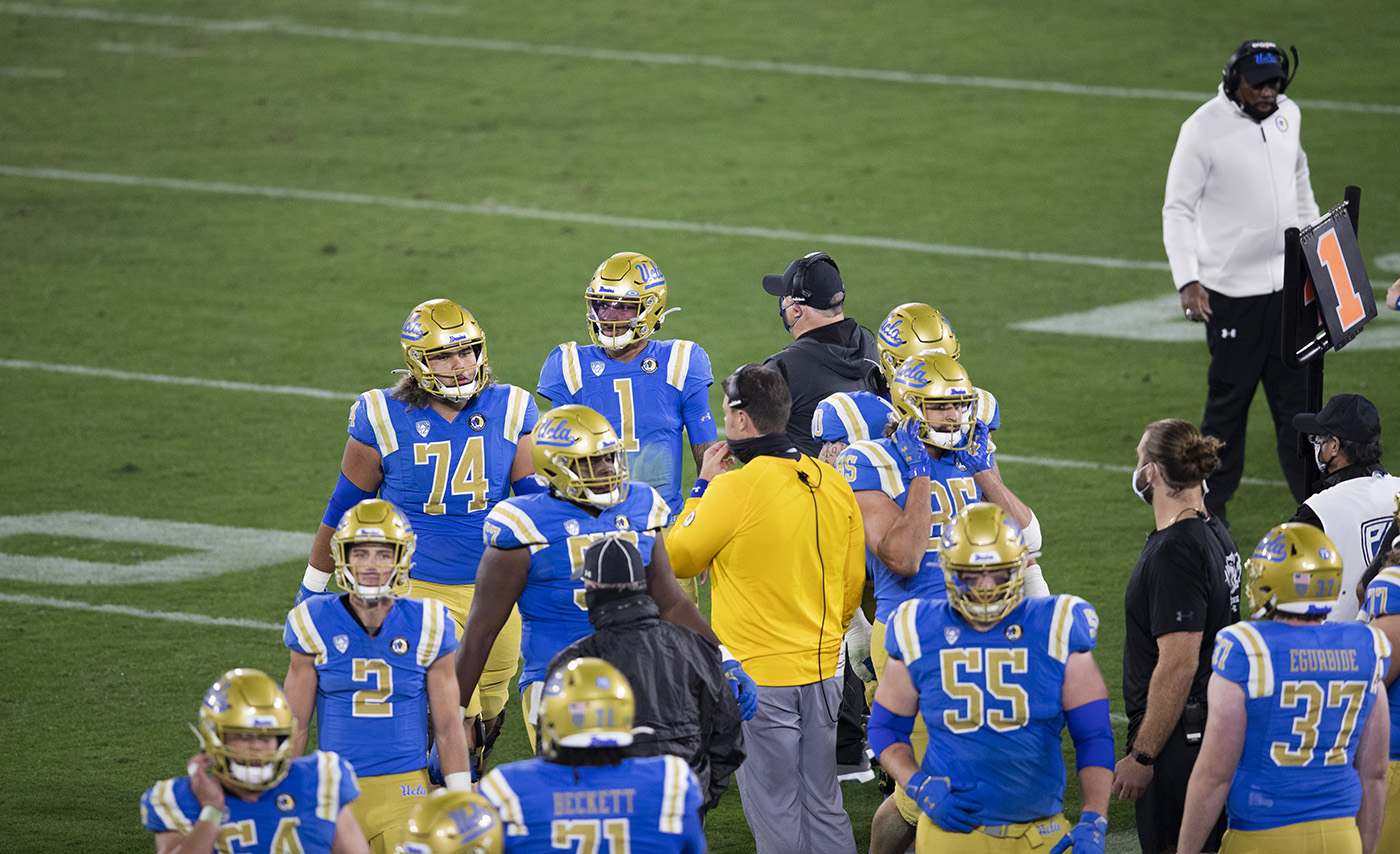 UCLA football could finish over .500 for the first time since 2015 with a win Saturday over Stanford. (Andy Bao/Daily Bruin)

The Bruins will end their shortened season with an old rival.

UCLA football (3-3) will close out its 2020 campaign at the Rose Bowl against Stanford (3-2). Both teams have opted out of playing in a potential bowl game if invited.

Even though the NCAA has granted all fall athletes an extra year of eligibility because of the ongoing pandemic, this will be the final home game for many of the Bruins’ seniors should they elect not to return.

Junior quarterback Dorian Thompson-Robinson said Saturday’s game will be an opportunity for UCLA to send off its departees with a victory and build positive momentum for 2021.

“We have a handful of seniors, just sending them out the right way,” Thompson-Robinson said. “As well as you always want to end on a good note going into next year. I know this was kind of a weird year – some people call it a ‘throwaway year’ or whatever – but just to go off into next year on the right note is something that is really positive.”

Stanford comes to Pasadena riding a three-game winning streak, all on the road and all coming by five points or fewer.

The Cardinal have been practicing away from their home in Palo Alto and forced to play on the road since a ban on contact sports in Santa Clara County went into effect Nov. 30. After practicing in the Pacific Northwest for games against Washington and Oregon State, Stanford spent the past few days preparing for UCLA in Santa Barbara.

Coach Chip Kelly said the Cardinal were put in a tough situation and commended their staff for getting them through multiple weeks on the road.

“I do understand they’ve probably been put in the worst situation in our league and (Stanford coach David Shaw)’s handled it unbelievably,” Kelly said. “It’s not that we have fans, but you’re living in your dorm, you’re living in your apartment and your routine is the same. To be living on the road for as long as they’ve been living on the road, obviously we’re very cognizant.”

UCLA is coming off a loss against crosstown rival USC. After leading by as many as 18 and going ahead with 52 seconds left in the game thanks to a 43-yard field goal by redshirt freshman kicker Nicholas Barr-Mira, the Bruins could not hold on, falling for the second straight year to the Trojans.

Redshirt sophomore tight end Greg Dulcich had eight catches for 167 yards in the loss. The current Pac-12 leader in receiving yards said UCLA has turned its attention to the upcoming game and will try to come out with a win in the final time out in 2020.

“Obviously, losing that one (hurt), we played a really tough game, played really strong, I felt,” Dulcich said. “So it hurt that we didn’t come away with it, but you’ve got to move on. You’ve got to take things week to week, and so we’re not playing (USC) anymore. We’re playing Stanford now, so that’s where all the energy is.”

After finishing the last two seasons with a combined 7-17 record, Kelly said past results do not have any bearing on this game, and he is looking for a win in whichever game is next on the schedule.

“The narrative is, if you won last week, that doesn’t mean anything the following week,” Kelly said. “You know, you can’t live in the past. That’s what the narrative is there, so our whole focus is on Stanford and we’re fired up and excited about that.”