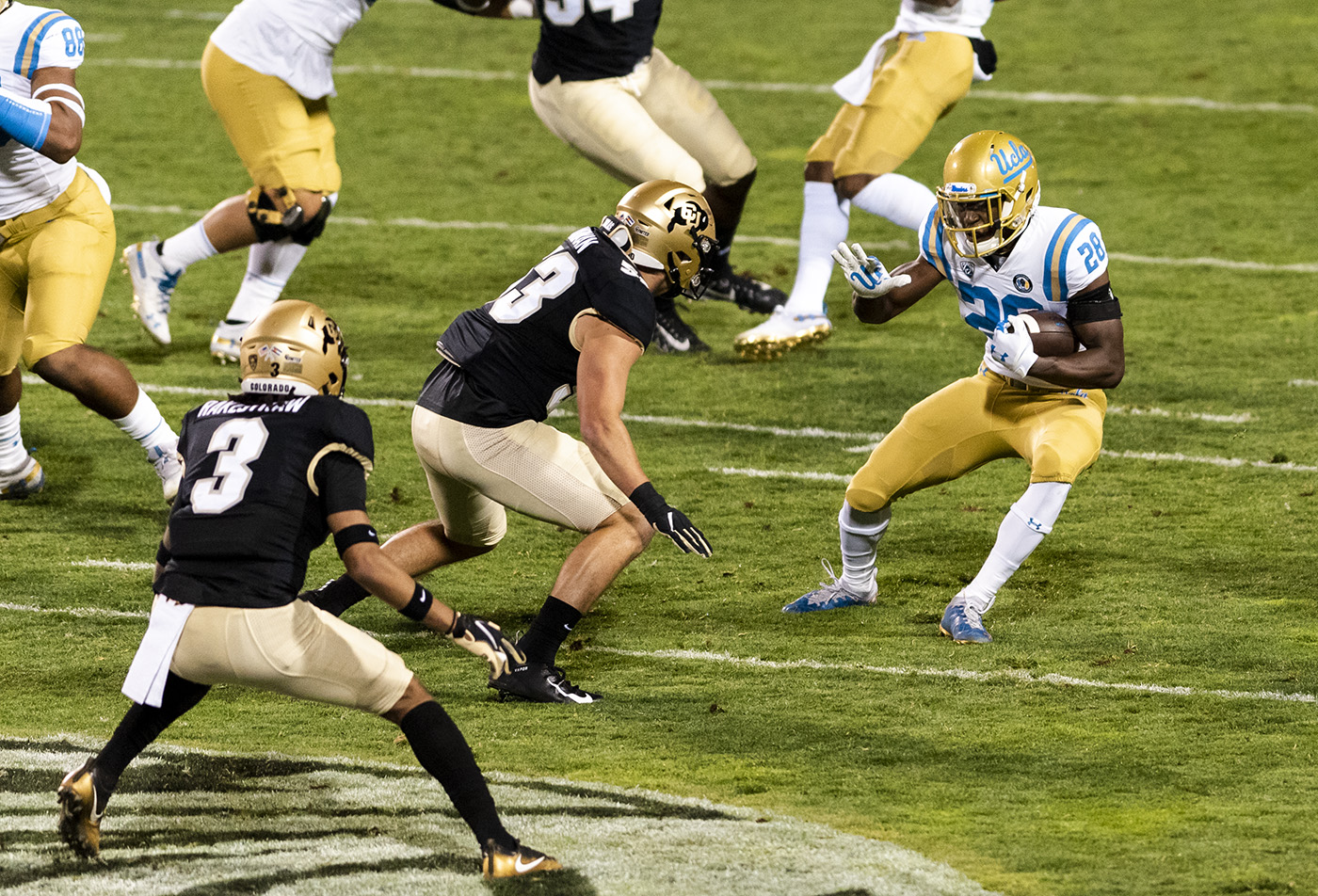 Graduate transfer Brittain Brown carried the ball 12 times for 71 yards and a late-game touchdown in UCLA’s 34-10 win over California. He looks to bring the same productivity this week versus No. 11 Oregon. (Liz Ketcham/Daily Bruin senior staff)

The Bruins have a chance to do something they’ve yet to accomplish under coach Chip Kelly this weekend.

UCLA football (1-1) squares off against No. 11 Oregon (2-0) in Kelly’s second return to his former school with a chance to eclipse the .500 mark for the first time in Kelly’s Westwood tenure.

Things may be different for the Bruins, however, as junior quarterback Dorian Thompson-Robinson is potentially unavailable for the game because of COVID-19 contact tracing protocols. He guided the offense to 38.0 points per game in two contests while racking up 499 passing yards, contributing another 161 yards on the ground and accounting for nine total touchdowns.

In his place would likely be three-star recruit and 2018-2019 Gatorade Texas Player of the Year redshirt freshman Chase Griffin, who has yet to throw the ball in a collegiate game. Griffin did play in garbage time against California, where he got one rush for one yard.

Regardless of the quarterback versus Oregon, Kelly said establishing the run early in an effort to avoid going down big as UCLA did in its first contest against Colorado will be crucial to the game plan.

“What happened in our first game is because we were behind in the first half, we didn’t have as many rushing attempts in that game than we did against (Cal),” Kelly said. “I think we had 25 rushes total and some weren’t designed runs, but as you get going and try to be more of a balanced team, your rushing totals jump and if our rushing totals are higher than 50 then we’re probably doing some good things.”

The game against Kelly’s former team will be different than the 2018 matchup – not only because of a potential change in quarterback but also as there will be no fans in the stands. Oregon had the highest fans per stadium capacity percentage in the Pac-12 over the last five years at a mark of 102.79%.

Kelly said having fans at Oregon is part of what makes it an intense game day environment.

“Obviously, (Oregon is) a special place and has a special part in my heart,” Kelly said. “There are so many great people that I was fortunate to meet because of my experience at Oregon and I’ll always treasure that, but it’s different. There are no fans and one of the things that makes Oregon special are the fans and they’re not going to be able to be there.”

Oregon quarterback Tyler Shough is third in the Pac-12 in passing yards, two slots above Thompson-Robinson, and the only Pac-12 quarterback with more rushing yards than the Bruin.

Despite better quarterback play, Oregon comes into the game last in turnover margin in the FBS with five lost turnovers and zero forced turnovers. Just two slots above it lies UCLA, which has also lost five turnovers but has forced one of its own.

With each team’s turnover margin incredibly low and potentially a backup quarterback starting for UCLA, both teams may attempt to showcase their dynamic running abilities.

The Bruins found another reliable source for ground gain in graduate transfer running back Brittain Brown, who carried the rock 12 times for 71 yards and a touchdown against Cal. Brown said he runs angry hoping to score a touchdown every time he carries it.

“The O-line has been doing a really great job,” Brown said. “They like running the ball, and I told them I like running behind them. Every time I get in there, I’m trying to go 100% because every time I touch the ball I’m trying to score, so when people say I’m running angry, it’s just me running as hard as I can and trying to break one off.”

Junior receiver Chase Cota, who caught a touchdown last week versus the Golden Bears, noted that if the Bruins stick to their game plan, they have a chance to win the game against a top-15 opponent.